Over the past few years, Kayfabe Commentaries has moved to the forefront of the shoot interview industry, presenting interesting new concepts for shoot interviews that strive for entertainment without being too exploitative of the subjects being interviewed.  While this perfect balance isn’t always achieved, they’ve presented some strong interviews over the past few years, and I’m excited that we will be reviewing a good deal of their releases moving forward.  Their latest release is a new installment in their “Wrestling’s Most…” series, which presents various Top 5 countdowns.  This time, we are treated to a discussion of “Wrestling’s Most Despised”.  In general, these countdown are kept fairly lighthearted, but as I’ll address later, that becomes a challenge for this particular edition.

The total runtime is a bit over one hour, and this is definitely for mature audiences only.  From this point on, there will be SPOILERS for the 5 men on the countdown. 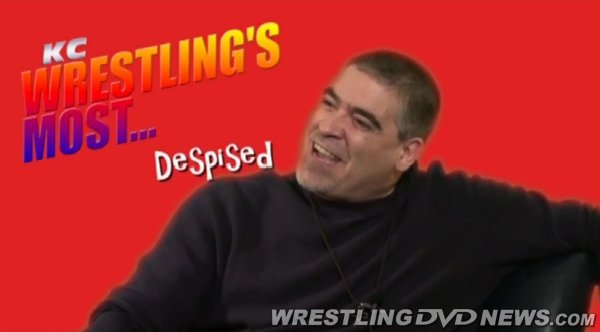 If you’ve seen any of the other countdown releases from KC in the past, then you should expect pretty much the same thing here.  One of the first things that will probably jump out to a lot of you is that the countdown is relatively short.  For a Top 5, you still are given 10-14 minutes for each entry, which is a decent amount of time, but the short runtime still stands out.  For this release, the short runtime is a huge benefit.  This isn’t designed to go too deeply into each personality on the countdown.  With the exception of Jose Gonzalez perhaps, most fans who are buying this are probably pretty familiar with the other men included (Chris Benoit, John Laurinaitus, Vince Russo and Vince McMahon).  As an audience, what you want is to hear the reactions of those being interviewed to the men on the list and whether or not they should be included.  And, ultimately, that’s what you are given.

The segment on Russo felt the shortest, so I think they could have given him more time, especially since he is #1, but you quickly learn that most of the superstars interviewed didn’t really think he deserved to be on the list.  Thus, this is the least interesting segment, even though it’s at the top of the list. It’s fun to hear the wrestlers’ responses to the names on the list; in the case of Laurinaitus, McMahon, and Russo, a lot of the wrestlers interviewed disagree with their placement on the list to begin with. This allows for “both sides of the coin” to be heard in the case of these men. 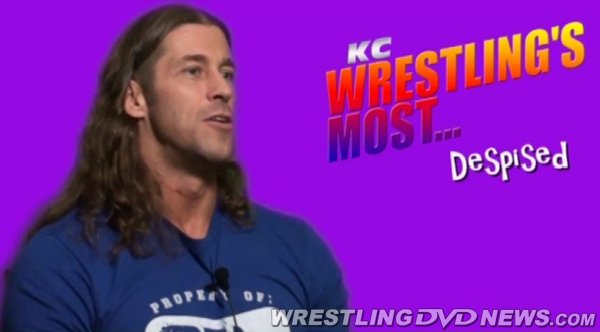 I’ve referenced the men interviewed a few times, and this ends up being the biggest strength of the release.  The choices for who to include interviews from is strong across the board.  I’m not going to name all of them, but the three that stood out as my favorites were Sean Waltman, Blue Meanie, and especially Stevie Richards.  I had heard Waltman and Meanie in shoot-style interviews before, but this was the first time I had seen Richards in one, and he comes across as a smart guy who doesn’t really hold any grudges.  He gave interesting insights into each guy, particularly Chris Benoit, which can obviously be a touchy subject.  I’m hoping he gets used on different releases from KC in the future.  Some of the guys involved in this project, such as DDP, were simply not used enough.  I’ve always enjoyed DDP, so I was disappointed that we only got to hear from him a few times, and he never said anything particularly enlightening.

There was only one man interviewed who I didn’t particularly care for: New Jack.  At times, his opinion would pretty much contradict everyone else’s opinions, showing that he may have just been saying “bold” statements to seem risky.  For example, pretty much all of the wrestlers say that even if the fans dislike Vince Russo, he was a decent guy backstage.  New Jack, on the other hand, claimed that Russo was a piece of sh*t.  Personally, I’m more inclined to believe all the other wrestlers over New Jack.  Fortunately, the other wrestlers came across well, your own personal feelings for them set aside (I, for instance, take everything Kevin Nash says with a grain of salt). 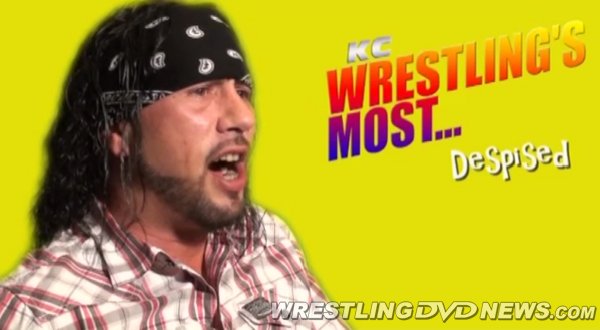 The strangest aspect of this release was, in a way, not really in KC’s control.  The 5 men on the countdown were voted on by the fans, and in the end, the list comes down to 2 guys convicted of murder (or as good as convicted), and 3 men in power positions who the fans just don’t like.  This creates a weird tonal shift between the different segments.  The Jose Gonzalez segment is taken seriously, but since the man himself isn’t that well known, this part doesn’t have as big a cloud hanging over it as the Benoit segment.  As I’ve mentioned earlier, this countdown is kept fairly lighthearted, and that’s pretty much impossible when discussing Chris Benoit.  On the plus side, though, the discussion of Benoit is the most interesting part of the video.  Since WWE has pretty much written Benoit out of existence, it’s rare that we get to here a large group of wrestlers discussing the tragedy.  This is the deepest the interviewees get on the entire release, and it’s refreshing to here the incident discussed frankly.  I’d recommend checking this out just for this segment, even if it creates a weird tonal shift to then moving on to a discussion of why Vince McMahon is despised. 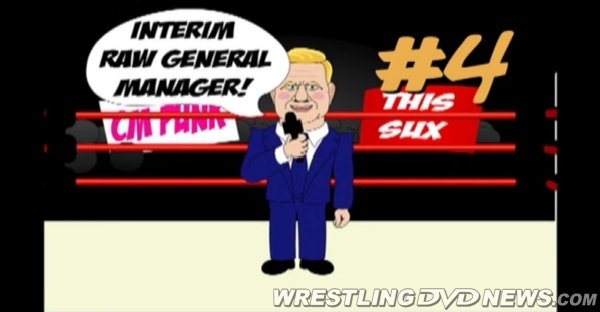 As long as you don’t go in expecting anything too profound, I think you will enjoy this set.  If you have seen any of the countdown shows on VH1, you are getting something pretty similar here, with more time dedicated to each subject than you would get on those TV shows or a WWE countdown release.  The program is very well paced, and the one hour run time gives each segment the perfect length.  You’re bound to be entertained, even if this isn’t something you will feel the need to revisit all that often.  If you’ve checked out the release, let us know what you think in the comments below!

“Wrestling’s Most… Despised” is available now at KayfabeCommentaries.com.