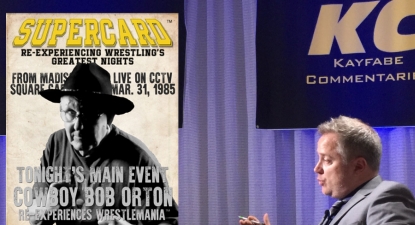 After nearly 34 years it seems like everything that could be said about WrestleMania I has been said. But the latest edition of Kayfabe Commentaries‘ “SUPERCARD” proves that, sometimes, history has a few more things to say.

In the series a main event star sits down to “re-experience” an event they headlined. From the background and the angle to the opponents and the event itself “SUPERCARD” digs deep to tell the story of one event on one night. In the latest edition, “SUPERCARD: WrestleMania 1”, Sean Oliver is joined by WWE Hall of Famer “Cowboy” Bob Orton, Jr. (sans cast) to break down his involvement in the single most important event in the history of modern professional wrestling, WrestleMania. 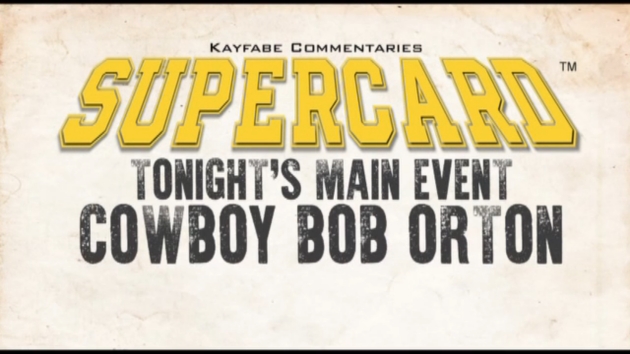 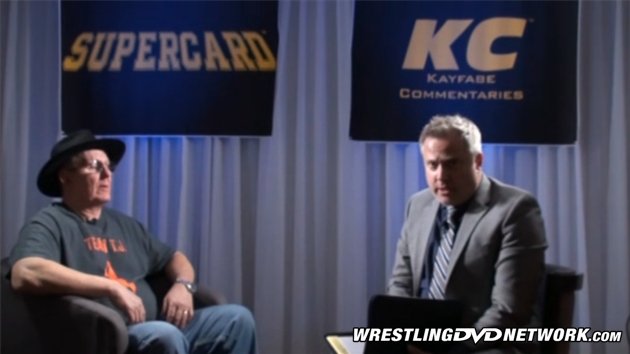 First things first: if you’re looking for a career retrospective interview with Bob Orton, Jr. this program, unfortunately, is not for you. This interview deals exclusively with Orton’s involvement with the World Wrestling Federation prior to and leading up to WrestleMania.

The first chapter of the interview deals with “Background”. In this portion Sean Oliver and Bob Orton discuss the “Cowboy’s” 8-month stint in the WWF in 1982 and Orton’s eventual return to the territory in March of ’84. Orton talks about the difference in working under Vince McMahon, Sr. and Vince, Jr.; wrestling Andre the Giant and then-WWF World Champion Bob Backlund; what separated the New York territory from the others; working Madison Square Garden; and the difficulties of breaking through in Jim Crockett Promotions. The most interesting portion of the discussion, for me, had to do with why he was happy to be paired with Roddy Piper in 1984 and the true story behind the origins of the superplex, including a conversation Orton had with Paul Orndorff about “Mr. Wonderful” using the piledriver in the WWF. 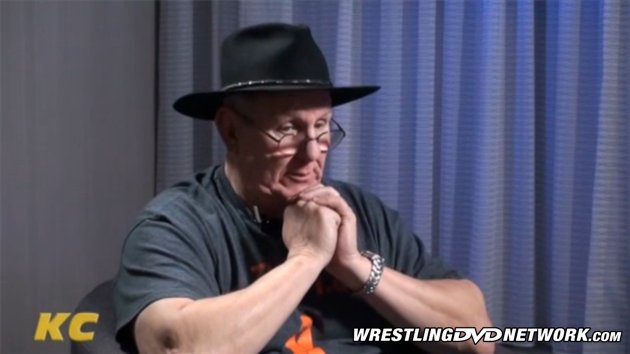 “The Build-up” is next, in which Oliver and Orton discuss the origins of “Rock ‘n’ Wrestling”, Cyndi Lauper’s involvement with the WWF, and the Brawl to End it All on MTV. Though they talk about these things an unfortunate common theme begins to emerge: Bob Orton, Jr. can’t remember anything! If he’s prodded and given enough clues he can manage a vague retelling but, by and large, Orton can’t seem to recall any of the key events or happenings leading into WrestleMania. But before we jump on the man and start throwing rocks at him it helps to remember that Orton is 67 years old, has been wrestling for nearly 46 years, and, according to Bob Orton, Jr. himself, drank a lot of beer. Maybe it’s because I was a fan of the man as a kid, I don’t know, but I’m willing to cut the “Cowboy” more than a little slack.

Where Orton stumbles Sean Oliver is there to keep the ball rolling. Though Orton is clearly struggling to recall things Oliver, at his best here, is able to word questions in just the right way so as to help Orton not only remember a thing or two but even extract an anecdote we might not have otherwise heard, like Orndorff’s phone call regarding the use of the piledriver, Andy Warhol asking to have his picture taken with Piper and Orton and then having only their feet photographed, or Cyndi Lauper threatening to destroy a check for charity should the organization leak the amount. 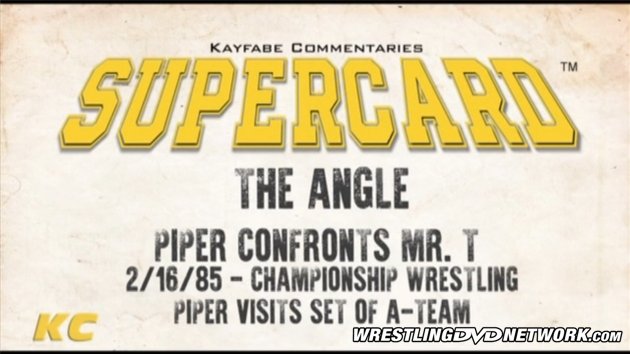 Unfortunately Orton’s inability to remember things continues throughout the remainder of the interview and, at times, gets worse. While Oliver tries to break down “The Angle” with Orton and the behind the scenes goings-on that got them to WrestleMania, it’s more like Oliver painting the picture and Orton occasionally adding color the best he can. Those familiar with the early editions of Tony Schiavone’s What Happened When podcast will know exactly what I mean.

Eventually we get to WrestleMania with Orton telling how he arrived in New York City, he thinks, the day before the event and mentions his two favorite places to eat in the city, a Portuguese steakhouse and a Japanese restaurant, neither of which he can recall by name. Orton talks about the event feeling like any other though the boys knew the future of the territory was riding on it’s success. Orton remembers getting checks from different banks prior to WrestleMania but that practice stopping altogether after the event and money in general not being much of an issue thereafter.

As usual the two run down the entire card with Orton giving his best thoughts on each of the wrestlers involved before talking briefly about the main event, which Orton is nothing but pleased with and says went off as planned. Though Hogan and Mr. T were ushered out of the building to a prearranged after-party Orton remembers sneaking out of MSG with Piper and going back to the hotel to drink more Heineken. 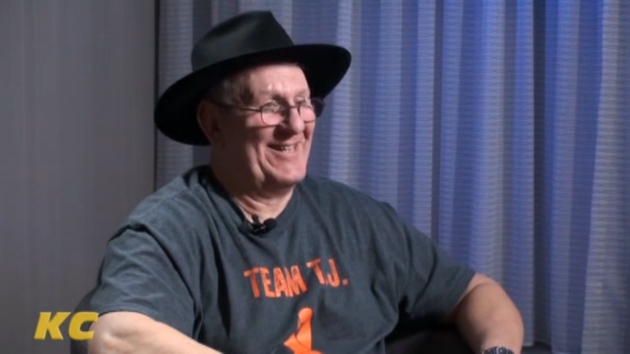 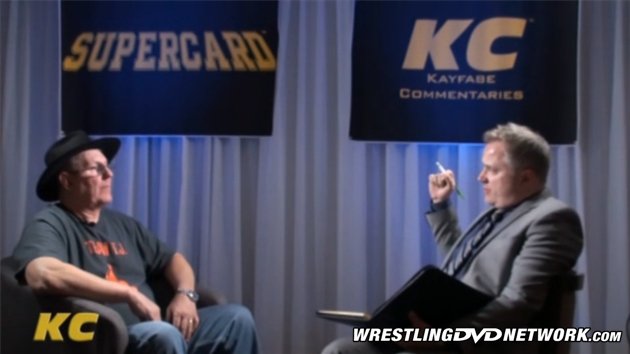 With a running time of 1-hour and 36-minutes “SUPERCARD: WrestleMania 1” may not be the release some were hoping for, but what it lacks in new information about WrestleMania it makes up for with history from other areas, like working with JYD; Andre the Giant dating Orton’s sister; what separated Vince McMahon, Sr. from the ordinary promoter; rooming with the Iron Sheik; Bruno and David Sammartino; what Orton witnessed just prior to David Schultz slapping John Stossel backstage at Madison Square Garden; Orton’s mixed feelings on McMahon exposing the business in 1984; and Vince McMahon, Jr. waiting until his father had passed away before taking the WWF national.

Though I, as a hardcore fan, rather enjoyed this interview I would caution casual fans to think very carefully before buying this release as it may not meet their specific expectations. Old school fans, however, are sure to enjoy this trip down memory lane.

Pick up a copy of “SUPERCARD: WrestleMania 1” now at KayfabeCommentaries.com. 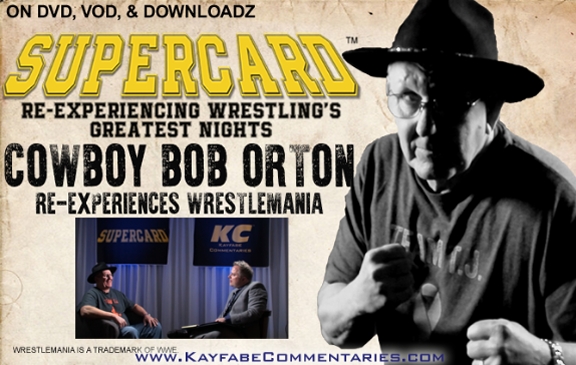