The show opens with Lilian Garcia singing a beautiful rendition of the national anthem which, in light of news leading into the event about a terrorist threat at the Philips Arena, seemed only right. 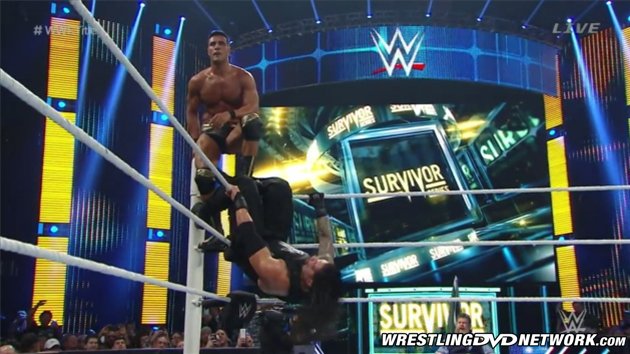 Since his return to the WWE at last month’s Hell in a Cell event, Alberto Del Rio has looked better than ever. But his job on this night was to make Roman Reigns look even better. This, for me, could easily be considered the match of the night if the Diva’s match wasn’t so good. Though the outcome was never in question, well placed false finishes and strategic psychology gave the match an unpredictable, urgent feel it sorely needed. On several occasions Del Rio looked like he might pull off the upset. In then end, however, Reigns capitalizes on a Del Rio mistake and advances to the Championship Final via the spear. 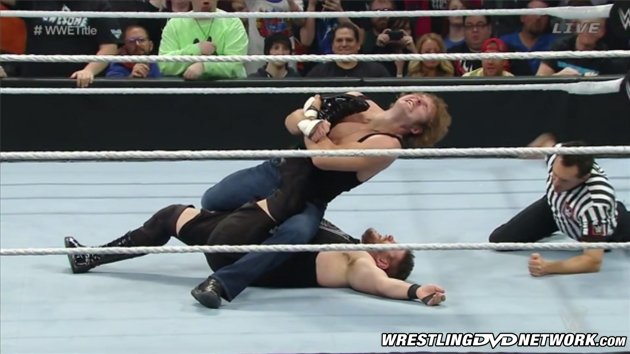 If there’s one Superstar who has benefited the most from this tournament it has to be Dean Ambrose. Languishing in the mid-card for some time (Ambrose hasn’t been on PPV since Sept.) Ambrose took advantage of the tournament opportunity, stepping up his game and proving that he is a World Champion-in-waiting. In Kevin Owens, Ambrose found a perfect opponent and the two brought the best out in each other with the limited time they had to work with. Another psychologically driven match, this one felt like it could go either way until Ambrose connected with a beautiful hurricanrana followed by “dirty deeds” to score the pin and move on to face Reigns in the Championship Final. 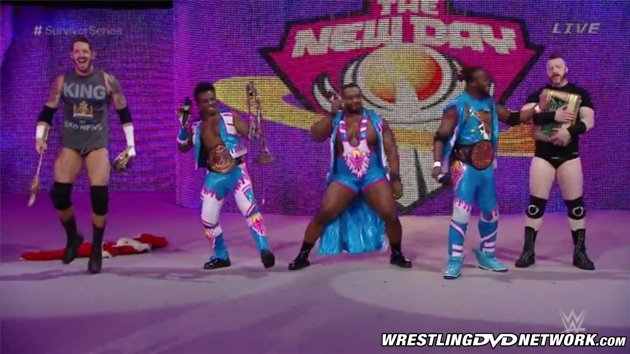 This is a tale of two matches. While the New Day were involved it was a fun, energetic “Survivor Series” match. When Kofi and Xavier walked out on the match after Big E was eliminated by Jey Uso the match fell apart, dragging on for over five minutes before Sheamus, without taking out a single babyface, was finally eliminated by Ryback via “shell shock”. I’m not sure what was supposed to be accomplished in this match, but having a relatively fresh Sheamus being unable to eliminate even Kalisto from the match before being eliminated himself made Sheamus look weak. I’d be remiss if I failed to mention the humorous New Day pre-match promo that is worth checking out. 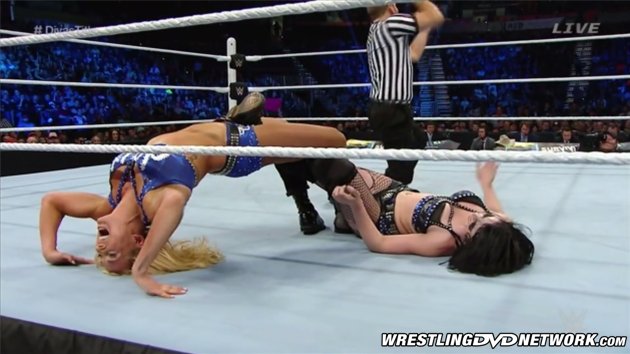 This was one of the most anticipated matches of the night both from both an athletic and storytelling aspect. And to me, at least, it lived up to expectations and was my pick for match of the night. A match worthy of the Intercontinental or United States title, it is easily one of the best pure women’s wrestling matches in WWE PPV history. Paige, the Diva’s Kevin Owens, and Charlotte are tailor made for each other. Charlotte’s mean streak is the perfect match for Paige’s narcissistic entitlement complex. After nearly 15 minutes of action Charlotte spears Paige off the barricade and rolls Paige back in the ring before getting the win via “figure-eight”. The only drawback to this match was the crowd, which seemed out of it for most of the night, to be honest. 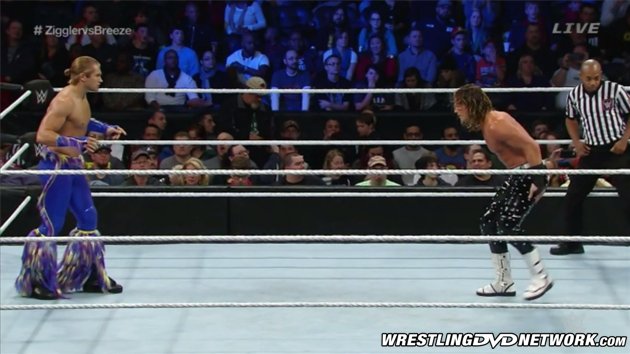 Easily the weakest match of the night this one felt like what it was, a time killer to bridge the gap between the Diva’s match and the main events. Breeze is looking better with each week while Ziggler continues to look strong. This is only one match of a lengthy program so there’s no need for anyone to light their hair on fire over “lost momentum” or “dead career” talk for Ziggler, they have to establish Breeze somehow. Breeze wins with the “unprettier”. 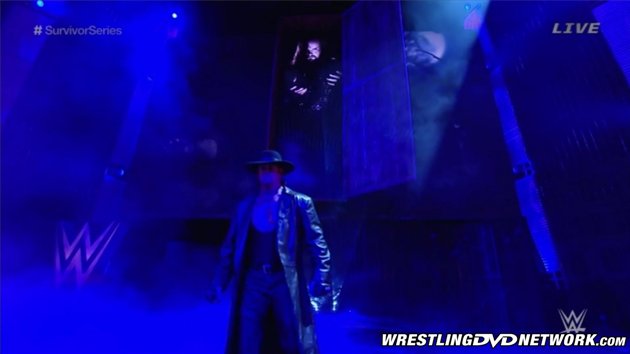 After an incredible video package and equally incredible entrance complete with a massive casket displaying the many incarnations of The Undertaker, this wound up being the nostalgia act many thought it would be. After about ten minutes The Undertaker hits the “tombstone” on Luke Harper to put the Wyatt Family to rest. Though it seemed to play a very small part in the match itself, Undertaker appeared to tweak his right knee as he and Kane took out Erick Rowan, limping noticeably early in the match.

This was, to me at least, the worst possible way for this tournament to end. The problem wasn’t the participants but in the fact that they had no time to work with and no story to tell. After weeks of teasing an Ambrose/Reigns showdown this match felt rushed and pointless at times. It wasn’t a terrible match, just rushed, too focused on the big move. In hindsight it is clear that WWE was far more interested in setting up the big swerve than giving fans a proper pay-off to the story we’ve been watching unfold. I’m not saying I expected Sting/Luger or Bret/Owen, but I did expect something better than what we got. In the end, Reigns connects with the spear and wins the title.

Confetti flies, pyro goes off, two friends embrace, and Triple H offers to shake Reigns hand. After a moment Reigns spears the COO and leaves him laying, only to turn around into a “brogue kick”. Sheamus, fresh and rested, cashes in his “Money in the Bank” contract and the bell rings. 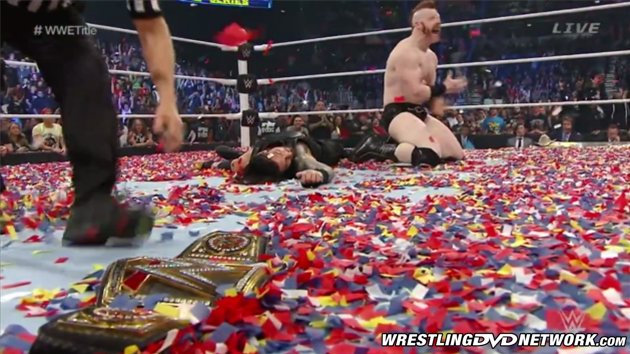 Reigns kicks out of the “brogue kick” and tries to shake the cobwebs as Sheamus preps for another “brogue kick”. Reigns ducks the kick, bounces off the ropes, and runs smack into a hellacious, second “brogue kick”. Sheamus hooks the leg and wins the match for his 4th World Heavyweight Championship. Afterwards Sheamus shakes Triple H’s hand and embraces the COO as he celebrates. A crushed, nearly teary Reigns lies shocked on the mat as the PPV fades to back.

While WWE sold Sheamus’s cash-in as a shocker, most fans saw it coming, even expected it. Though the two semi-final matches and the Divas Championship match were great matches it’s not enough to save the rest of the card. After a slew of memorable and largely solid PPVs this year, Survivor Series 2015 felt like a let-down. I understand Rollins’ injury forced a total rewrite but surely, with all the talent at their disposal, we could have gotten a better PPV.

Did you watch Survivor Series 2015? If so, let us know what you thought of it below.

Watch Survivor Series 2015 and your pick of 4,000 hours of content on the WWE Network for only $9.99 per month. Your first month is FREE! Click here to subscribe to the WWE Network.