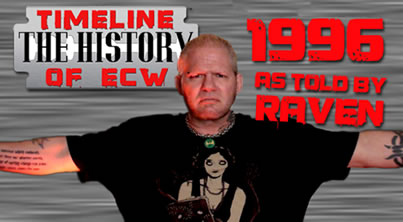 The year 1996 was a BIG year for Extreme Championship Wrestling; not only did some of its biggest stars debut, but it was also the year of some of the companies most famous (and of course infamous) moments, matches and even incidents!

So, why Raven? Well, for me, Raven is the perfect choice to talk about 1996 ECW.

After all, Raven reigned as the promotions World Champion Heavyweight Champion for 75% of the calendar year and was involved with some major angles with Tommy Dreamer in the beginning of the year, and the Sandman for the remainder of the year (the feud that of course also involved Sandman’s wife, Lori “Peaches” Fullington and son, Tyler). 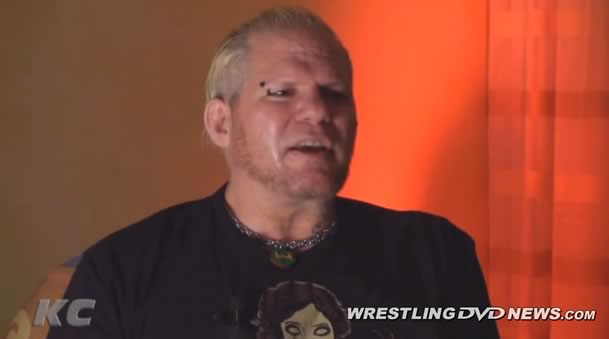 I’m sure by now you are all familiar with Kayfabe Commentaries‘ Timeline DVD series and also the fact that the ECW series also features a bunch of classic ECW clips courtesy of RF Video. In total the interview here with Raven runs for a little over 2 hours and 15 minutes.

If you know much about Extreme Championship Wrestling, or even just a little bit, you will probably be aware that 1996 was a huge year for ECW, not only in terms of in ring encounters, but also the incidents, arrivals and departures it played host to. 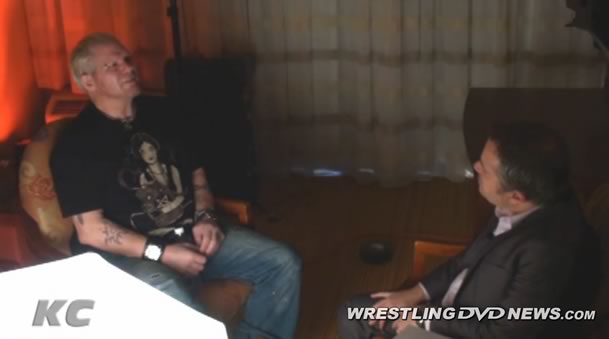 Many of the major stories of the year were covered by the release including: the lesbian kiss, the Mass Transit incident, the crucifixion, the WWE invasion, Pitbull #1’s broken neck, the bWo coming together, and the story behind the barbed wire match in which Raven recaptured the ECW World Title to close out the year. Many of the big arrivals and departures of the year were also looked at too. However, as the year was so, so big and had so many huge moments, incidents, arrivals and departures, sadly many weren’t covered. 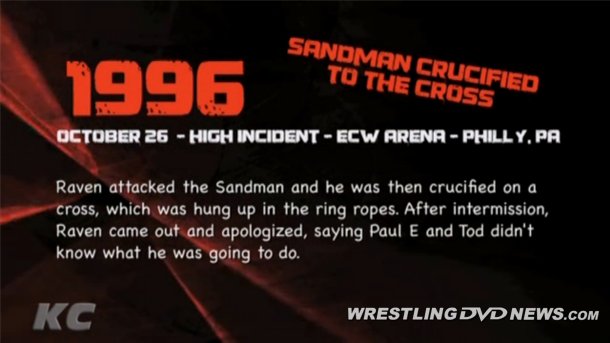 Some of the stories that I personally loved were the ones which I had completely forgotten and/or didn’t expect. Some examples of these were the story of Divine Brown’s ECW appearance (famous at the time for being arrested with British actor Hugh Grant for performing a lewd sex act in the actor’s car). Another interesting (and suprising) one was the formation of nWo in which Hall and Nash did portray very ECW-esque characters, being that they were more ‘real’ than many of the other WCW and even WWE superstars of the era.

An intriguing one was about Raven/Sunny “interactions” and his thoughts on her and Chris Candido’s relationship and Sunny’s infidelities. The final cool and unexpected segment was Raven’s recount of the awesome 2 out of 3 falls double dog collar match between he, Stevie Richards and the Pitbulls, and while this was a 1995 match, its inclusion was very welcomed. 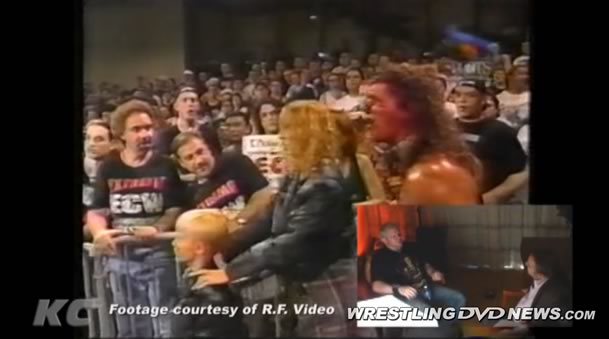 Raven’s drug and alcohol problems are looked at briefly, but maybe they weren’t included too much here because there is a ‘Breaking Kayfabe’ coming down the road. Raven isn’t exactly known as being one of the most self-deprecating individuals in the wrestling business, however at times here – especially when looking at his mistakes – we do get an air of this from Raven. However, Raven does of course manage to put himself over a few times as well (obviously). 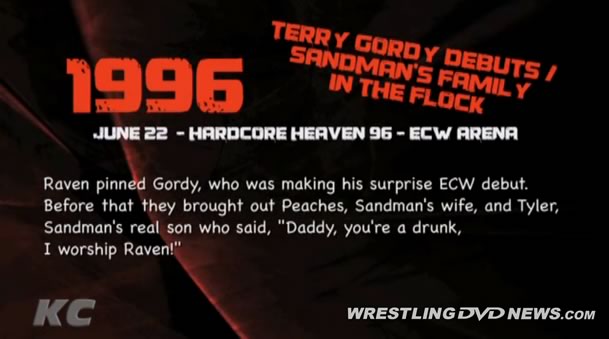 Unfortunately the second half of the interview really goes through the milestones very rapidly with the final quarter of the year only receiving about 30 minutes of coverage. A shame, as I would have loved to see more discussion and I would have liked to see another hour added. It could be possible that the lack of discussion for some of the moments may have been due to Raven’s lack of memory or recollections of the other moments, which is a shame.

That aside, and in conclusion, this is another really fun DVD release from Kayfabe Commentaries and if you are an ECW fan, or even someone looking to learn more about ECW, this is a release you will need to jump on and add to your collection. Sadly, we are very quickly approaching the end of this ECW Timeline series, as only 1993 remains uncovered (which is planned for release later this year)… unless the WWECW years are covered, which could be really quite interesting if the right interview subjects can be sourced.

“Timeline: The History of ECW – 1996” is available now at KayfabeCommentaries.com. You can purchase a physical DVD copy or stream instantly On Demand.