Review: ‘Timeline: The History of ECW 2000’ DVD – As Told By Justin Credible

Having now reviewed a number of different installments of the Timeline series, it’s pretty safe to say that this is the most reliably entertaining video series released by Kayfabe Commentaries (and based on how frequently they’ve been coming out, they are probably also some of the best selling).  I’m also a pretty big fan of ECW, but it’s rare that you hear many interviews about the final days of ECW outside of stories about bounced checks and the TV show on TNN.  This interview allows you to look back at the demise of the company, but also look at some of the good matches and moments from its final days.  Being one of the few guys who was there for the entire year, Justin Credible was a solid choice to serve as the interview subject.  While he may not be the most charismatic interview, he is very informative, and doesn’t seem to be holding much back.  That being said, there isn’t much “dirt” spread during the interview.

The total runtime is around 85 minutes, and the DVD is intended for mature audiences. 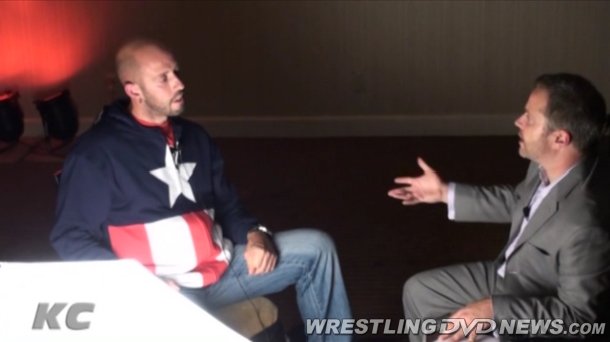 Even though it was building to the eventual demise of ECW, 2000 wasn’t a particularly interesting year for the company.  Sure, there are a few big stories to discuss, such as the cancellation of ECW on TNN, Mike Awesome leaving for WCW while still champ, and of course the infamous “bounced checks”.  For the most part, Credible just confirms most of our suspicions in regards to these stories.  Yes, he probably lost around $50,000 in unpaid money.  Yes, Mike Awesome was hated for leaving ECW, and when he came back to lose the title to Tazz, he used a separate locker room.  Yes, TNN really just used ECW to prepare for getting Monday Night Raw.  You don’t learn too much new throughout this interview, simply because Credible confirms so many of the rumors we already thought were true.  However, I still found myself thoroughly entertained throughout the course of the interview.  The one story that really surprised me was Credible’s claim that ECW’s style was gentler than WWE’s style today.  Even with the use of weapons, the matches were a little easier to work.  I can definitely see where Credible is coming from with this claim. 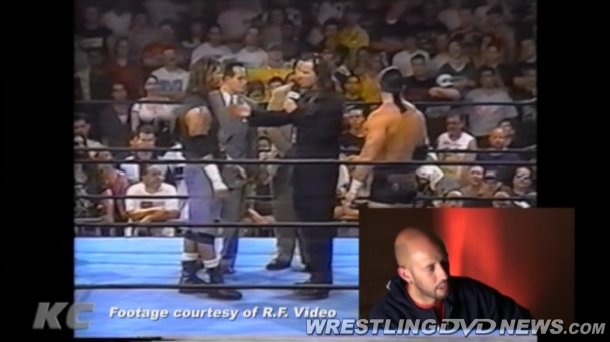 This was the first ECW Timeline edition I’ve reviewed, and the biggest thing that helped this stand out from other Timeline episodes is the availability of footage.  Since RF Video still has the rights to use some ECW footage, Kayfabe Commentaries was able to use some video clips throughout the interview.  This is a major help for the overall flow of the program.  For those who don’t have a huge history with ECW, it allows you to see some of the bigger moments discussed in the interview.  The way the clips are incorporated is not great, though.  The clips are added over the interview, but the sound is not muted from the clips.  Therefore, we have two competing soundtracks running at the same time.  Since you can only listen to one thing at a time from a biological standpoint, it can be hard to watch the clip while not missing out on some of the interview.  I feel like in the future, KC should mute the audio on the clips, or just take a break from the interview to show the clip.

While I can’t say that this a must-buy, it still was a very enjoyable interview.  I watched the entire thing in one sitting, which is rare for me with Kayfabe releases.  Credible keeps you entertained the whole time, even if he isn’t telling outlandish stories or going on too many tangents.  In a way, this is almost the polar opposite of the Roddy Piper Timeline interview.  Piper told a ton of road stories, and it was often at the expense of discussing the actual topics from 1984.  Credible stays much more on point, and answers all of Sean’s questions very directly, which helps make him feel like a reliable source.  If you are an ECW fan, there’s no question that you will enjoy this.  It doesn’t add anything new to the discussion about the fall of ECW, but backs up most of the stories you’ve heard over the years. 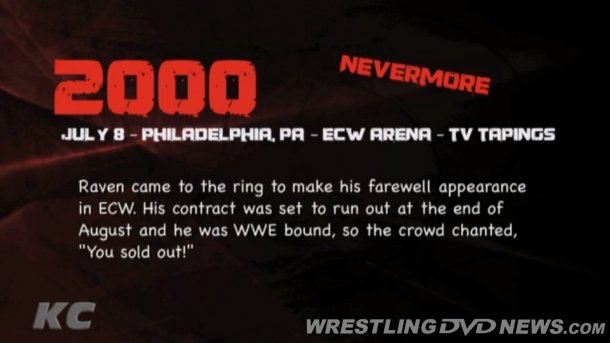 “Timeline: The History of ECW – 2000” is available now at KayfabeCommentaries.com.