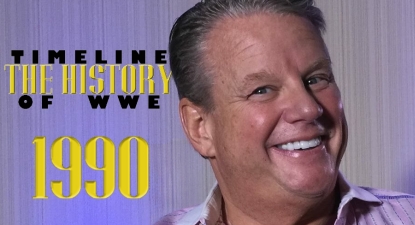 It’s time once again for another trip down memory lane with Kayfabe Commentaries‘ ever-popular “Timeline” series!

“Timeline” is Kayfabe C.’s innovative historical shoot interview series hosted by Sean Oliver. Each edition focuses on one year in a promotion’s life as told by the stars who lived it. All the hot angles, stars, backstage politics, and marquee matches are broken down by a special guest.

In the case of “Timeline: The History of WWE – 1990” Sean Oliver is joined by the one and only Bruce Prichard to talk all things World Wrestling Federation in 1990. 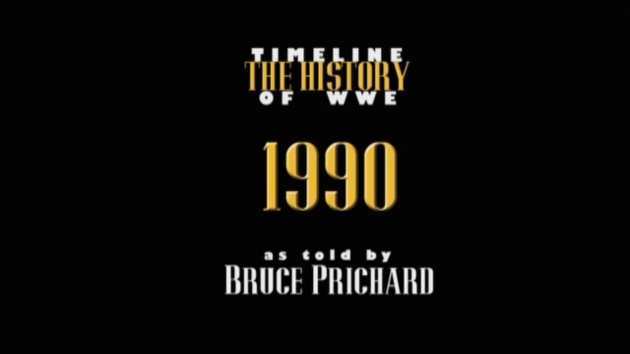 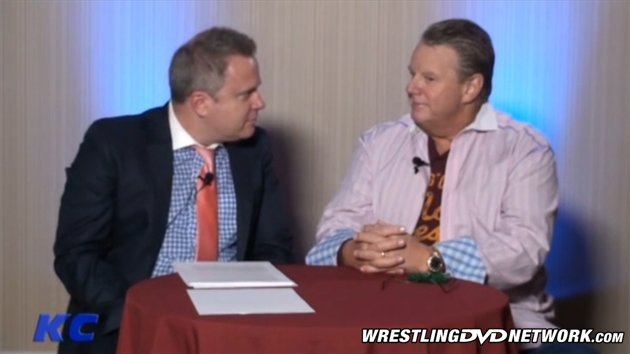 1990 was a year highlighted by the tremendously successful WrestleMania VI, the ascension of Ultimate Warrior, the heel turns of Sapphire and Sgt. Slaughter, and the debuts of Kerry Von Erich, the Gobbledy Gooker, Crush, The Legion of Doom, and The Undertaker, to name a few. But 1990 was also a goofy year full of “mutant sewer rats”, the “Battle Cat”, “Ultimate Love”, and the World Bodybuilding Federation (WBF). As both a performer on TV as “Brother Love” and the head of WWF television, there may be no better candidate to dissect the ups and downs and crazy booking decisions of 1990 than Bruce Prichard.

While the biggest matches, moments and events of 1990 are detailed here, the interview serves more to demystify the era and put to rest some of the most popular myths and stories of the day, many of which are dead wrong, such as why Ted DiBiase never won a title in the WWF, why WrestleMania VII was moved, the truth behind the “Red Rooster”, and Vince’s original intentions for the Gobbeldy Gooker, to name a slim few. 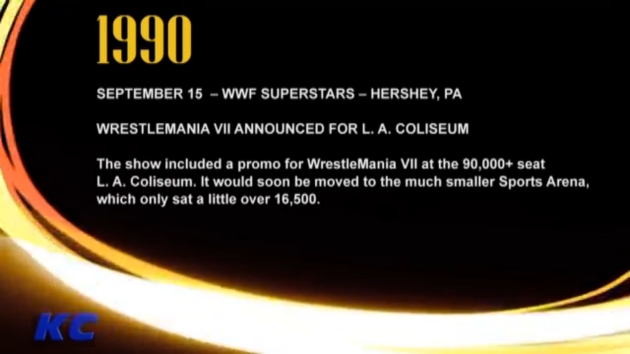 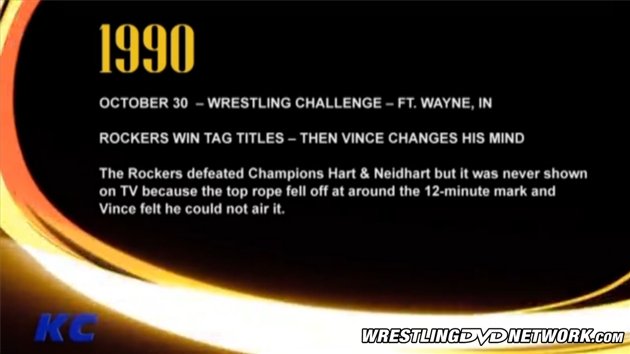 The true magic to this interview, though, lie in the little things, like Prichard talking about the origins of his televangelist alter-ego and future “Brother Love” (a must-hear story); tales of riding and working with Dusty Rhodes and the difference between Virgil and “The Dream”; talking about the greatness of Sherri Martel; debating Jesse Ventura about drugs and politics before recording commentary with Vince McMahon; trying to get Roddy Piper to properly pronounce the word “bidet” (“It’s an ass washer!”); having John Tenta cut a promo on him when the big man first started in the company; Ultimate Warrior upsetting the Slim Jim folks during a commercial shoot; the genesis of the Buddy Rose “Blow Away Diet” infomercial; and Randy Savage legally separating from Elizabeth to protect kayfabe while they were still happily married! The asides and stories are just as fascinating, entertaining and enlightening as the history itself, and that’s saying something.

For those looking for the dirt on The Ultimate Warrior circa 1990, you won’t be disappointed. Prichard tells the inside story on the booking of WrestleMania VI and how it went exactly as planned, why Warrior was paired first with Andre and then with Randy Savage, and describes the train wreck that was Warrior’s appearance on the Arsenio Hall Show. Prichard talks about the original plans for Warrior potentially “replacing” Hulk Hogan as the WWF’s top babyface colliding with the reality of Warrior’s ability and the lack of depth to the character, which they tried to overcome with the infamous “Amanda Ultimate Warrior” segment and appearances on television programs such as “Seriously… Phil Collins”, among others. 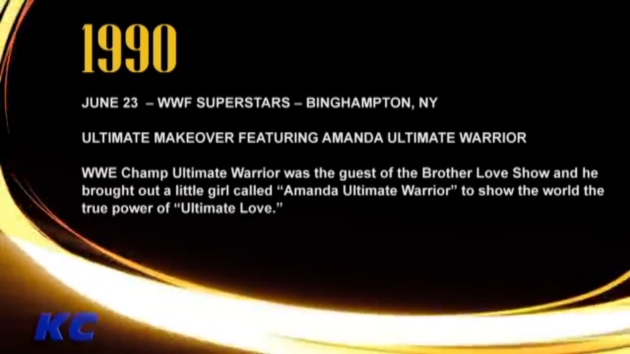 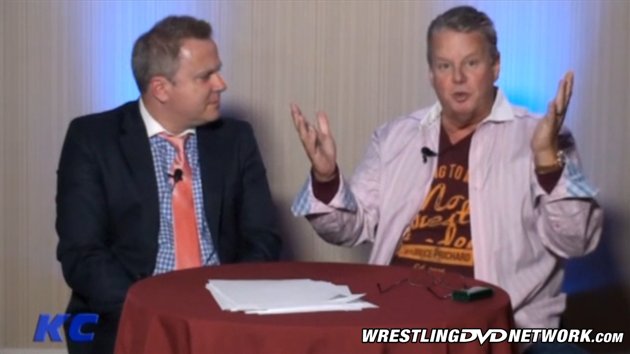 But it’s not all about Ultimate Warrior. Along with the insightful and often humorous asides is talk of Kerry Von Erich’s debut, why the Road Warriors changed their name in the WWF, the real reason why Sapphire was “purchased” by Ted DiBiase at SummerSlam ’90, why Vince had his eye on the late Herb Abram’s UWF, the classic “cheese cutting” and food fight filmed in Frankenmuth, Germany costing the company a whopping $27,000 in damages, why Vince McMahon hated Tony Schiavone’s work and the dictation classes he put the poor guy through, and the origins of the “Model” gimmick for Rick Martel and the role Vince McMahon’s own wardrobe played in getting the character off the ground. 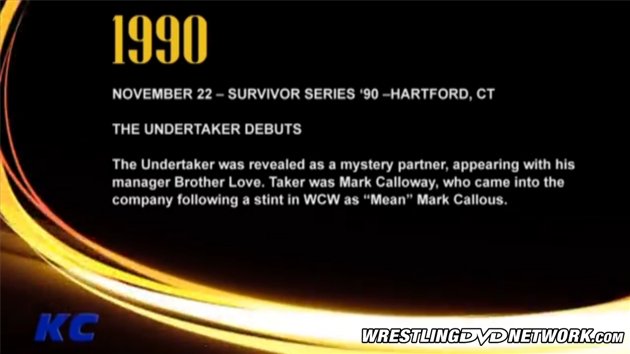 The true standout portions of the interview, for me, have to deal with the signing of “Mean” Mark Callous (which had nothing to do, contrary to the rumors, with Suburban Commando) and the original “ying and yang” idea for “Kane the Undertaker” and Brother Love, and how Hawk, on the toilet, came up with “Paul Bearer”; the true story behind why WrestleMania VII was moved from the L.A. Memorial Coliseum to the Sports Arena; the WWF’s financial issues that saw the end of the touring C-shows; how NBC’s restructuring of Saturday Night’s Main Event caused the restructuring of all WWF TV; how “Titan Towers” came to be and why; and how WWF miscalculated Sgt. Slaughter’s heel turn (that scrapped the planned “Sheik Tugboat” angle for WrestleMania VII) and how it backfired on the company once real life tensions with Iraq dominated the world news.

Throughout Bruce Prichard gives his thoughts on everything and everyone from Bad News Brown, “Mean” Gene, the Road Warriors, Paul Heyman, Tugboat, John Tenta, and Andre the Giant to the WBF (and ICOPro), Rick Rude (including why Rude quit and if he felt Rude was truly done in the WWF), Vince McMahon and his legendary stubbornness, the “Ultimate Survivor” (“So, if you’re gonna have an ‘Ultimate Survivor’, how the f**k you have two of ’em?”), Jim Johnston being an unsung hero, and Chuck Austin being paralyzed. 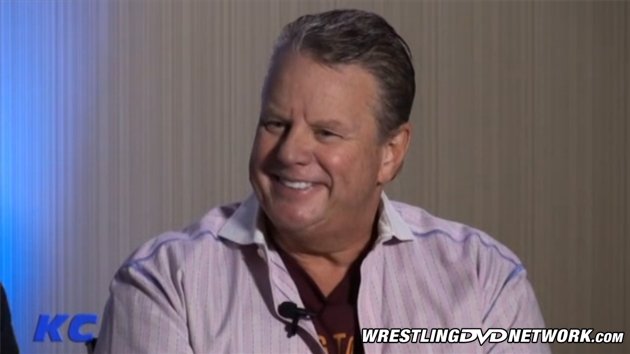 At 2 hours and 22 minutes “Timeline: The History of WWE – 1990” is must-see for any serious WWF/E fan. There’s no fluff here. Be it the stories or the history there is something here for any fan of WWE. It’s funny, it’s educational, it’s insightful, and (most importantly) it’s one helluva fun ride!

If you’ve never see a “Timeline” DVD before, there may be no better place to start.

“Timeline: The History of WWE – 1990” is available now over at KayfabeCommentaries.com.

You can purchase the physical DVD, stream it instantly On Demand, or download a copy to watch any time in the future! A “Signature Edition” was available but has since sold out.