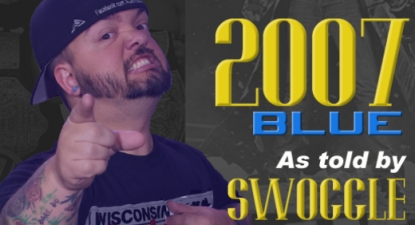 No year tested the viability or the very fate of WWE quite like 2007. A mere 12-weeks after setting records with WrestleMania 23 the WWE was rocked by the Chris Benoit double-murder–suicide. Overnight, talk of steroids, brain damage and drugs ripped the veil off the dark side of the industry, leading to cable news exposes and congressional hearings. WWE, meanwhile, was forced to rebuild, which is exactly what they set out to do.

“Timeline”, for the uninitiated, is Kayfabe Commentaries‘ historical shoot interview series in which series host Sean Oliver and a special guest break down one year in the life of a promotion, including the stars, the angles, and the big matches.

For “Timeline: The History of WWE – 2007 (BLUE)” Sean Oliver is joined by Dylan “Swoggle” Postl, who not only worked for WWE in 2007, having a career year in the process, but was witness to some of the years biggest and most talked about moments in and out of the ring. 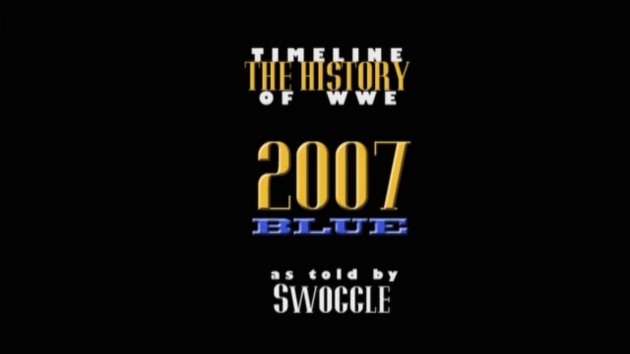 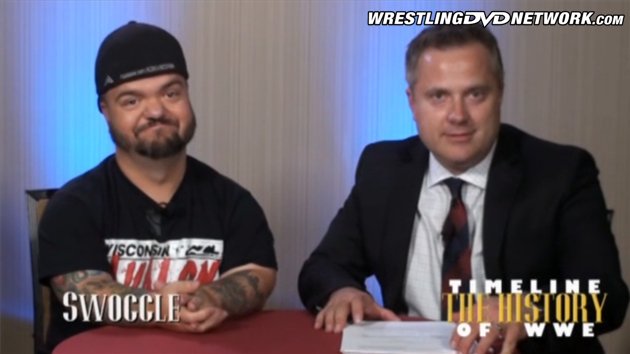 If you’ve seen Dylan’s previous KC outing, the classic “YouShoot: Swoggle”, then you know that Dylan is an avid fan of Kayfabe Commentaries and has a lot of fun doing the interviews. As much as I enjoyed Dylan’s “YouShoot”, “Timeline: The History of WWE – 2007 (BLUE)” is even better.

Though all of 2007 on the SmackDown brand (and some of RAW)—the signings, releases, suspensions, angles and biggest matches, behind the scenes stories—are touched upon, I’ll be focusing on three of the bigger moments of the year—WrestleMania 23, the Chris Benoit tragedy (and its aftermath), and the Vince McMahon illegitimate son angle—for this review.

In telling how his infamous Green Bay Plunge spot came to be at WrestleMania 23, “Swoggle” offers incredible insight into just how manufactured a modern WrestleMania is. From rehearsal schedules to move by move direction, we learn that “WrestleMania Moments” don’t just happen, they’re largely produced. Dylan dishes on what it was like to work with then-reality TV star Donald Trump, saying that Trump, like Ozzy Osbourne, Mike Tyson, and Bob Barker, loved working with WWE and enjoyed being there. “Swoggle” also details why having Trump on the card was the key to WrestleMania 23‘s overwhelming success.

The most compelling and engrossing portion of the interview is Dylan’s memories of how the locker room first found out about the Benoit tragedy, what they were told, and where Dylan went after finding out. Dylan recounts sitting in a hot tub in the early evening as the murder-suicide news broke in real time on the boy’s phones and flipping over to USA Network to find the Benoit tribute show still running. Dylan reveals the reaction of those within WWE and what the meeting that Tuesday was like. “Swoggle” also talks about the impact the tragedy had on the outside worlds perception of WWE, including celebrities like the cast of Jackass. In a moment that may shock some, Dylan gives his real thoughts on what he believes happened in the Benoit house. 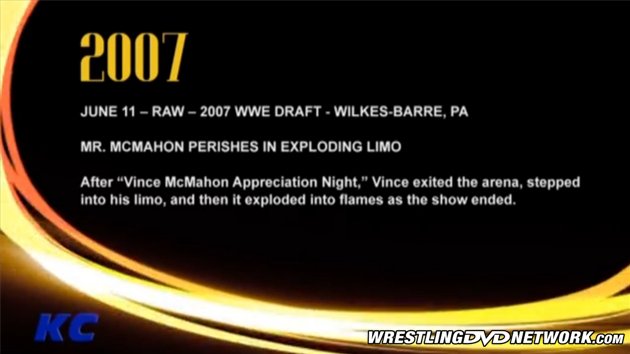 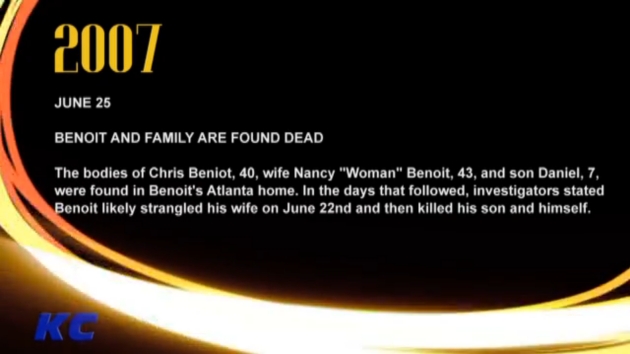 Another big story in 2007 was Vince McMahon’s infamous illegitimate son angle with Hornswoggle. Dylan talks about how he got the gig, including Bruce Prichard swiping Dylan’s phone to keep the little guy quiet. “Swoggle” goes into to great detail about where he was stationed in the arena, how the swerve was kept secret for so long, how they were able to get Sandman out of the ring, and who exactly knew ahead of time what was going on. Dylan talks about working with Vince McMahon and how, as Mr. McMahon, Vince relies on the writers/producers as much as the boys.

Besides these three big topics everything and anything WWE 2007 is covered. Dylan gives his thoughts on The Undertaker, winning the Cruiserweight Championship, Vickie Guerrero as SmackDown General Manager, working around the world, Vince ribbing Coach, and working with Stephanie McMahon and Johnny Ace. Along the way “Swoggle” dishes on everyone from Deuce & Domino, Rey Mysterio, Edge, and Jamie Noble to Melina, Fit Finlay, Booker T & Sharmell, Mark Henry, CM Punk, and Great Khali, just to name a few. Dylan also talks about the Wellness Policy, how it’s implemented, and who is (and isn’t) tested!

Best of all, this interview is hilarious. Aside from the more serious subjects that come up, this interview is full of laughs from start to finish, thanks in no small part to the excellent work of Sean Oliver. As an added bonus we get special footage of a BS session between the KC staff and “Swoggle” over the closing credits that puts a perfect bow on a nearly flawless edition of “Timeline”. A sign, I hope, of things to come in future releases. 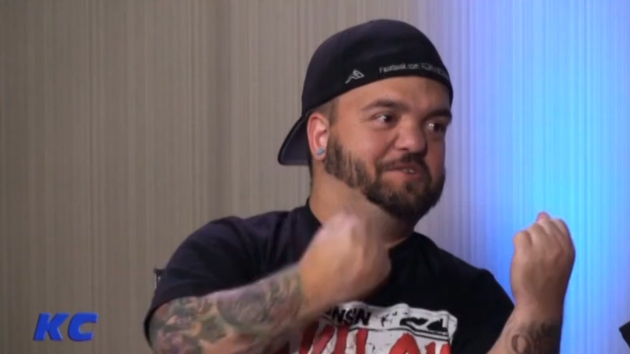 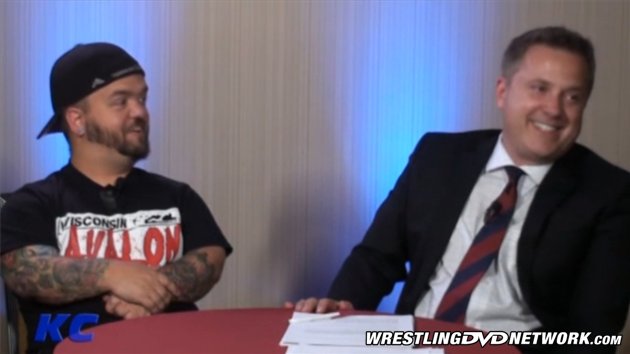 With a running time of 2 hours and 26 minutes, the DVD feature is frankly everything it’s advertised to be and more, and is easily one of the very best “Timelines” yet.

For this reviewer, “Timeline: The History of WWE – 2007 (BLUE)” is as close to perfect as any “Timeline” before it. With brutal honesty, keen insight, and a great sense of humor, Dylan Postl carries 2007 with ease. Whether you’re a fan of Hornswoggle, the SmackDown brand, WWE in general, or Kayfabe Commentaries, this one is must-see material. Period.

“Timeline: The History of WWE – 2007 (BLUE)” is shipping now at KayfabeCommentaries.com.

It’s available for download, instant streaming, and of course as a physical DVD. 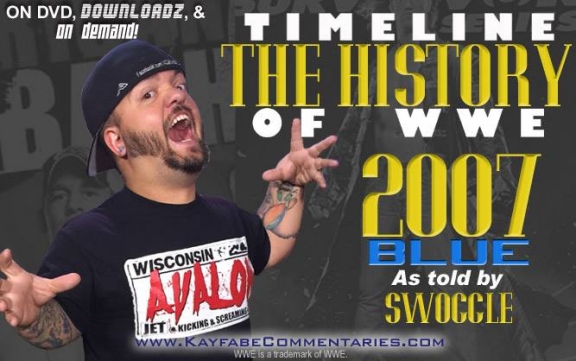