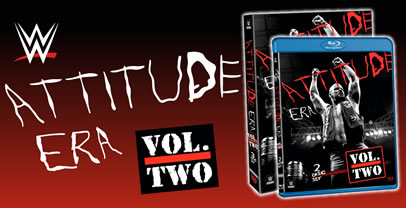 I’ve always been a bit outspoken in regards to my thoughts on the Attitude Era.  While I can see why it was popular at the time, I’ve found it to be a bit overrated.

That being said, back in late 2012, I enjoyed the first Attitude Era Blu-ray released by WWE.  Even if the documentary was superfluous, it represented the era well, and included a nice balance of matches and promos to represent those years.  Since that Blu-ray, we’ve gotten a lot of additional exposure to the Attitude Era, through both the Raw 20th Anniversary box set and, of course, the TV shows and PPVs featured on the WWE Network.  While I certainly wasn’t upset to see a 2nd volume of Attitude Era announced, I was curious how the WWE could make this set unique. Fortunately, they did a pretty nice job.

“Get It”: The Interviews & Segments

As I’m sure you’ve seen in previous reports on the site, Michael Cole is the host for the Blu-ray.  He is featured very infrequently, though.  He only shows up at the very beginning and very end, making his presence in the first place feel odd.  In between various matches and moments, we do get some interviews with a number of different Attitude Era stars.  I appreciated the list of talent used for the interviews a lot.  Sure, we’ve got an interview piece with The Rock, and one with Triple H as well, but for the most part, some of the less heralded stars of the era were interviewed.  This includes people like The Godfather, X-Pac, Sunny, and Jerry Lawler.  There’s no real through-line for the various interviews; instead, they are a number of different “shoot interview” style stories about the moments and backstage life from the era.  You will learn a few things you didn’t know from these interviews, making them worthwhile inclusions.  As usual, I would have preferred more, but I thought we got a nice balance throughout the set. 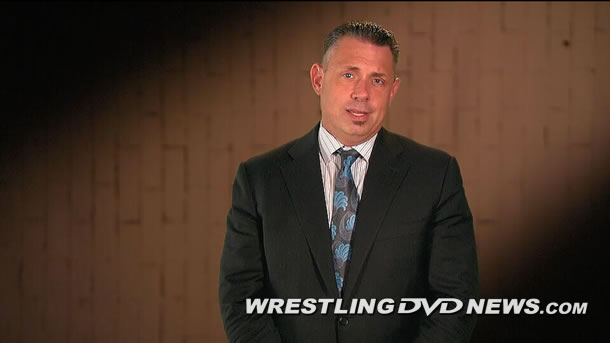 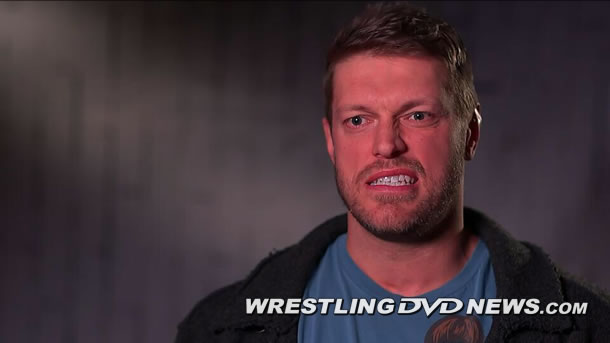 Overall, I thought the segments were well-chosen.  They represent the era well, even if there aren’t too many famous moments.  Fans of unreleased footage will certainly approve of this fact.  It may appear that there are many more matches than segments included on this DVD, and overall that is true, but a lot of the matches end up being glorified segments, since they break down pretty quickly.  For example, the Kaientai match is really only included to set up the infamous Val Venis/Kaientai moment backstage.  It ends up being a lot of fun going into a match only seeing the generic match listing, and then discovering which moment this ends up leading to.

“My God, King”: The Matches

Note: I am not reviewing every match for this set; I’ve instead chosen to only focus on the more notable matches.  The matches not reviewed were either very standard matches, or were glorified segments.

A great brawl that represents the Attitude Era nicely.  I usually am not a fan of this style of match, but there was a storyline reason for the two to be brawling throughout the ring area, which helped give this match some focus.  Being a TV match, there isn’t a clear ending, but as a storyline piece this was very well handled. 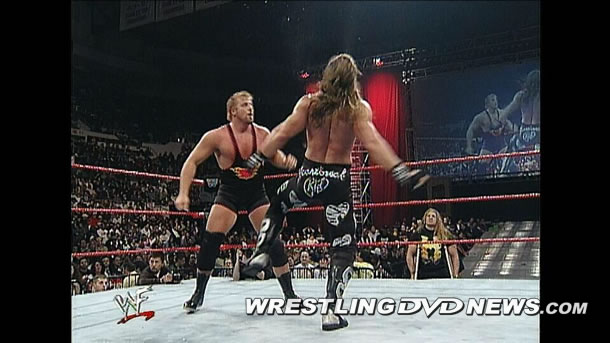 This is a pretty by-the-numbers title defense, but it really stands out due to The Rock’s performance.  You can tell that he is pretty much nearing the end of his transition to a big time guy by this point, and he is in pretty firm control of the crowd throughout the match.  While the match doesn’t have a “clean” finish, I still found it to be a pretty clever ending, so I can’t complain over that.

Another pretty standard title match, with another non-finish, but Austin & Shamrock did everything they could with the amount of time they were given.  The action is very fast paced, and the match feels longer than it really is.  Austin was pretty much at the peak of his power at this point, so the crowd helps make this match work as well.

While this match is pretty short, and not super memorable, I wanted to single this match out because I enjoyed its inclusion on the DVD so much.  It allowed us to see a number of lesser seen Attitude Era stars all in one place, which made for a fun watch.  We also saw some of the start to The Brood formation, which was a nice piece of history that isn’t shown too often.

There’s a memorable ending to this match, but it is pretty dull leading up to it.  The Rock & X-Pac did not have much chemistry; X-Pac’s kicks looked particularly weak.  I’ve seen much better from him before. I still found this was a nice representation of the Corporation at its strength, though. 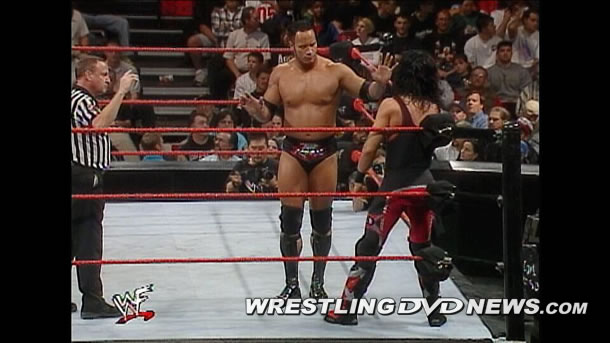 Another great representation of the Atttitude Era’s midcard in this match.  The Godfather gimmick had just started, and the pre-match segment, while pretty tasteless, was entertaining.  The match itself is pretty standard (I’m guessing you’re starting to notice a pattern here), but everything surrounding it makes for an interesting watch.

While it doesn’t do anything special, this match was a lot of fun to watch, and a PERFECT representation of the Attitude Era.  The crowd is really excited for Austin, the action is over-the-top without being flashy, and there are a ton of different story beats to the match.  The match never actually finishes, and in the end, I didn’t even care. 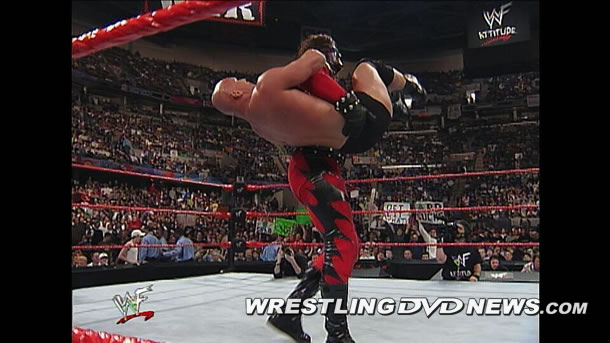 I enjoyed this significantly more than I expected to.  I figured it would just be a typical garbage-style hardcore match from the time period, but there was a nice balance between using weapons and still doing some wrestling.

Big Show looks great in this match, with the two big name superstars having trouble bringing him down.  While the match isn’t very good, it is an interesting piece of history, and there is a nice post-match segment with Austin included as well that we haven’t seen on video too many times before.

It’s Angle and Jericho, so you know you are going to get something pretty good.  Unfortunately, this isn’t one of their stronger outings.  Nothing bad, but nothing memorable either. 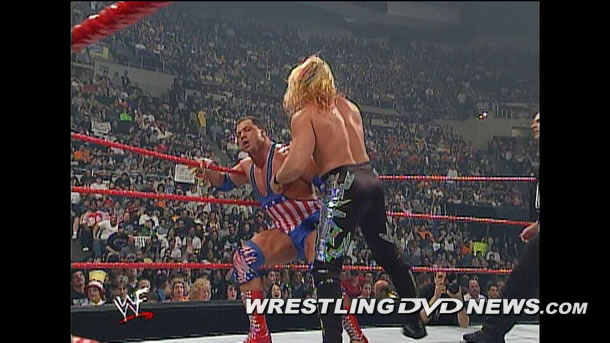 This is one of the more memorable moments of the Attitude Era.  The fact that this match even exists is pretty bizarre, and while it certainly isn’t good, it is a notable piece of Attitude Era history.

Two memorable feuds are represented in this match, but this isn’t exactly a strong showing for either of them. The Rock and Triple H are both great when they are fighting each other, but the match mostly focuses on Trish and Lita.  At this point, they weren’t exactly at the peak of their power, and the less said about them at this time, the better. 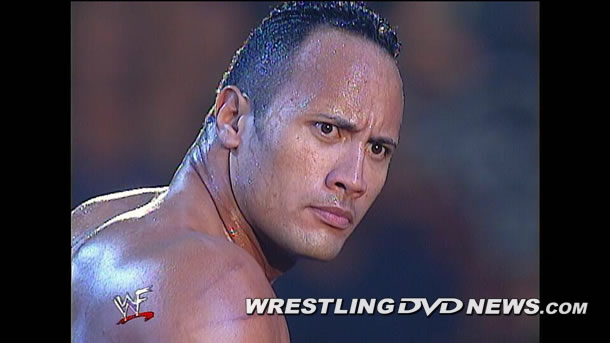 When I first started this match, I was surprised to see what appeared to be a fairly traditional match be included on this set.  It was a nice change of pace, and features some solid performers.  In the end, the match devolves into Attitude Era silliness, but it fit pretty well.

Unlike the earlier Holly/Gunn match, this is your traditional “garbage” Hardcore Title match from the era.  It’s fun to see the comparison between the two matches.  While these are never technical masterpieces, these matches are always fun.  This one ends up outside in the snow, which makes for a neat visual. 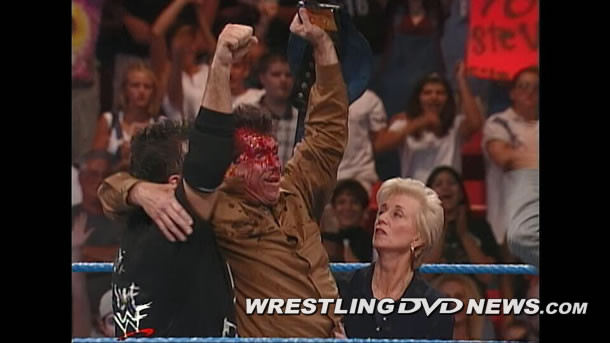 While this isn’t really a match, it is a very notable segment, and the actual match part lasts a lot longer than I expected.  A worthy inclusion for the DVD for sure.

This match has gained a lot of notoriety over the years simply because it had (almost) never been released on DVD before.  I’ve made clear my thoughts on Last Man Standing matches in the past, but I thought this match did a nice job to overcome a lot of those issues.  Any time the ref was counting, Triple H was usually there to keep the crowd entertained.  There’s a great story told over the course of this match, making it the easy standout on this release. 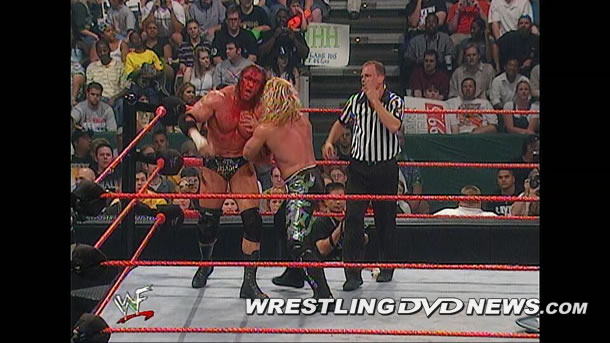 “We’ve Got Two Words For Ya…”: Closing Thoughts

The biggest question that this DVD needed to answer for me was “is this a good representation of the Attitude Era?”.  Without question, I thought that this set was a great representation of the era, and surpassed Volume 1 in that regard.  There are a number of over-the-top matches and moments, and the main superstars of the era are featured often.  This set did a nice job representing some of the undercard from the time period as well.  The early Divas get a nice look, as do superstars that include Godfather, Val Venis, Mark Henry, and the bizarre Patterson/Brisco feud.  These guys were all part of some of the more infamous angles from the time period, so it makes sense for them to be featured so prominently.  There’s some nice balance here, which also helps prevent the set from featuring too many repeated moments.  A lot of the footage here I had not seen before, and a lot of it comes from TV, which helps separate this DVD from the WWE Network.  I’ve always felt that the Attitude Era was all about Raw (and later SmackDown) moments, so this makes a lot of sense. 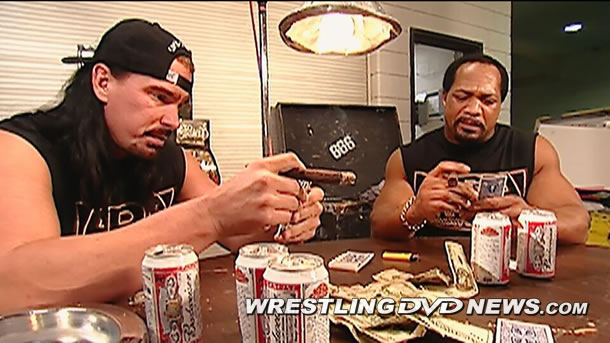 The biggest issue with this set is easily the match quality.

Since this is the Attitude Era, I wasn’t expecting technical masterpieces, but there could have been some additional, higher quality matches included.  The only match that stands out at all is the Fully Loaded 2000 match, which is only on the Blu-ray.  This is easily the lowest rated set I’ve watched in terms of the matches.  Since this DVD is so short, I would have included a few longer matches, even if they were repeats, to help boost the overall quality.  Because of that Fully Loaded match, I would recommend the Blu-ray over the DVD.  That is a match a lot of fans have been waiting for, and you can finally get it here. The other Blu-ray extras, while not spectacular, are still worthy inclusions.  I’m happy to say that this set is a pretty easy recommendation, especially if you were a fan of the era.

Get your WWE “Attitude Era Vol. 2” DVD or Blu-ray…


– UK/Europe: Available now! Get a copy ordered from WWEDVD.co.uk.

– USA: Available now! Get a copy here on Amazon.com or WWEShop.com.

– Australia: Available now! Get a copy ordered from WWEDVD.com.au.