Here we have it, the third installment of “Attitude Era” on WWE Home Video. Is it third time a charm, or is it just a case of ANOTHER Attitude Era DVD/Blu-ray falling short of my expectations?

The answer… I still can’t quite make up my mind.

So, to help, I’m going through the good points and the bad points of this release, then maybe by the time we reach the end, I’ll have the Low-Down for you folks (and no, not the Chaz & D’Lo one).

GET IT!? Click here to get your copy of WWE’s next Attitude Era DVD, or here for the Blu-ray.

In the ‘Network Era’, in which we all live now, we’re fortunate enough to have access to pretty much the entire Attitude Era (RAW, SmackDown and PPVs) in our pockets – 24/7, no matter where we are, by way of the WWE Network. So it’s a massive plus when WWE goes out of their way to deliver a DVD of content that we can’t find anywhere else. In fact, I think that this really has to be the future of WWE Home Video – they need to deliver us original content (documentary, countdown, etc.) or compilations of matches that can’t be viewed elsewhere. Then, if they have to utilize already available content it should have some form of added value (i.e. special commentary).

Right off the barbed-wire baseball bat, we’re off to a pretty good start with this set! 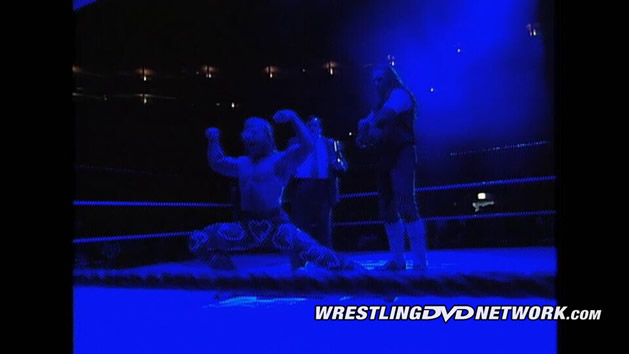 Granted, there isn’t an ‘official’ beginning and end to the Attitude Era and I’m sure everyone has an opinion on where the era begun and concluded. The content on this particular set though spans from the period of April 1996 to October 2000.

I’m pretty sure that if you polled wrestling fans, the general consensus would be that the Attitude Era began at either the 1997 Survivor Series or when Mr. McMahon’s “Cure for the Common Show” promo aired (where the scratch logo debuted). This is of significance as it’s more than a full year from where this DVD actually begins; and in fact the set begins more than 8 months prior to the term ‘Attitude’ ever being uttered on WWE TV (for you trivia buffs, it was December 1996 when ‘Attitude’ was first mentioned by a member of the WWE Universe during a call in segment with Vic “Vince Russo” Venom on WWE Livewire). 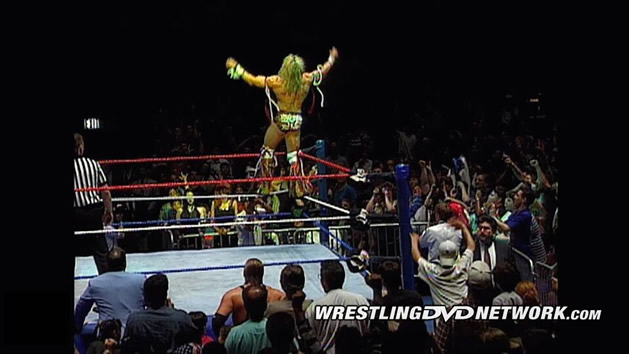 On top of that, it finishes up in October 2000, similar to the previous two Attitude Era releases in which the latest piece of footage was from December 2000 — why is there no love for 2001?!?

After all, we all know that the Attitude Era has to end at WrestleMania X-Seven when the ‘Texas Rattlesnake’ joined forces with Mr. McMahon. Even WWE acknowledges that the era ended between the March 26 and April 2, 2001 edition of RAW (look at the thumbnails on the Network).

So, is this an Attitude Era DVD? By my standards, probably not. 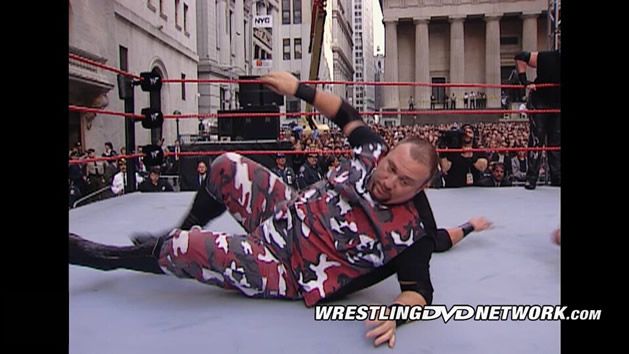 As a matter of full disclosure; I’m a really big Corey Graves fan. So for me the choice of host was a good one. Yes, Graves didn’t wrestle or commentate during the Attitude Era, BUT he saw the era unfold from the exact same spot that majority of you folks reading it did – his sofa. Graves is a pro-wrestling fan, and nowhere is this more evident than here on this DVD/Blu-ray.

Graves does a great job hosting and introducing the matches on discs one and two. Disc three is treated as a bonus set of matches so it doesn’t feature the introductory segments – the reason for this, I guess is to keep an Attitude vibe going early on when it may feel that the content isn’t actually from the era (but I went through this previously). 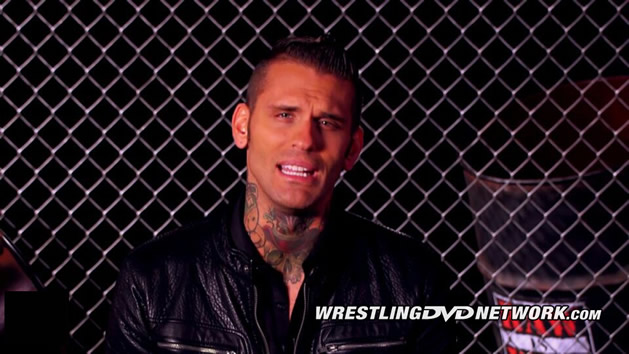 In a cool little feature that you may not have heard much about, we also have a number of “GTV” segments and it’s here that Graves fandom is truly evident. The GTV segments feature a hidden camera focused on Graves between takes. Here you’ll see him discussing topics such as WWE’s Kuwait Tour, Owen Hart’s broken arm and the Warrior with seemingly uninterested WWE production staff. These are a cool little feature and definitely adds to the Attitudinal authenticity of the DVD.

In addition, the choice of set is also very Attitude Era inspired with a reproduction of the 1997-2002 RAW backstage interview set. The host and hosting setup get two big thumbs up for me. 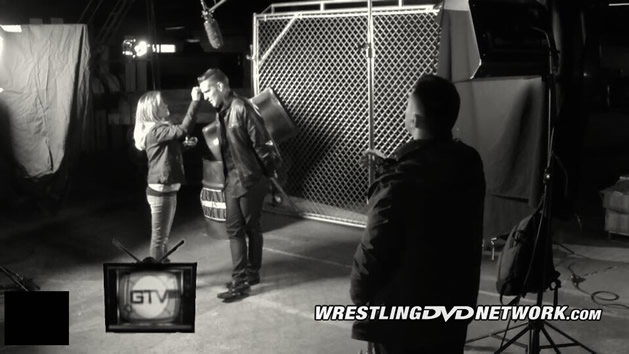 For me personally, the commentary adds so very much to pro-wrestling. Hell, I’ll even take *some* bad commentary over none (as modern day WWE viewers, we’re used to bad commentary).

Generally, whenever I am watching wrestling (or any TV, frankly) I’m always doing something else too; be it keeping notes, texting, tweeting or even just browsing the Internet. I very rarely just watch without the extra activity. So without the commentary, I’m kind of in the dark while I’m not staring at the screen. An occasional match here or there without any commentary isn’t too much of a bad thing – see the NXT DVD from earlier this year or even “RAW: After The Show” from a couple of years ago. I’m aware those RAW matches also didn’t feature commentary, but if you recall there were only handful of actual matches featured on that DVD.

In actuality only one match on this entire set features any commentary (Yokozuna vs. The Sultan). For some of the others, particularly the bouts from Kuwait, we expected to hear commentary as they were broadcast on television locally, but they do not feature any commentary whatsoever. 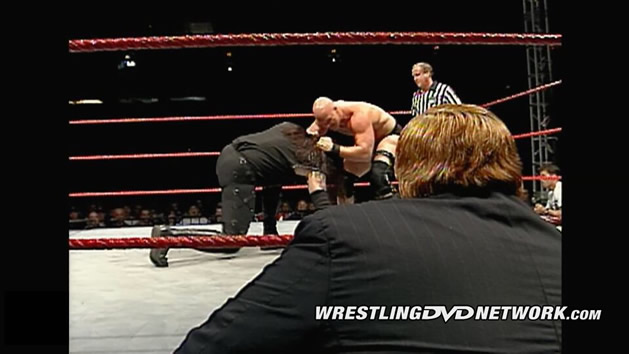 Of course we did get a heads up going in that the DVD/Blu-ray wouldn’t feature a commentary track – but as a not quite completely jaded fan there was always a little bit of hope deep in my heart.

In a dream scenario it would have been really cool if WWE had drafted in Jim Ross with Corey Graves to lay down a commentary track – that could have been an incredible plus point to this set! Frankly had that have been the case I could see many more folks picking up this DVD on day one; but hey, maybe I should keep this little day dream for a Fantasy Concept…. 😉 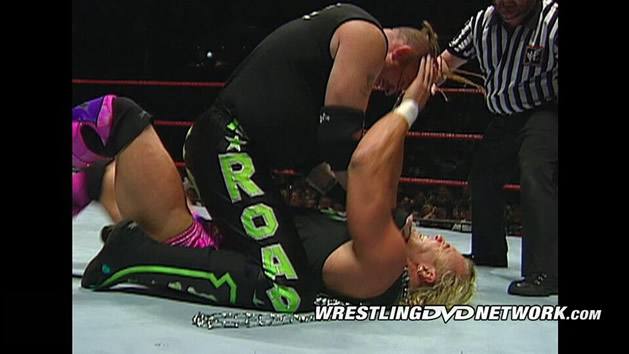 The vast majority of the matches compiled are not filmed in your typical WWE style with multiple cameras and mix of hard and roving camera work. These matches, for the most part, are shot with one or two ringside cameras through the ropes (there’s even some fan camera shot footage that WWE mixes in with hard and ringside footage for one or two of the matches).

On the whole the quality is very good as even some of the ringside camera work looks to have been shot with WWE’s broadcast quality equipment – however I would be remiss to mention that some of the footage is camcorder quality and so you need to be aware of this going in. For the most part though I was very presently surprised with the video quality on this set. 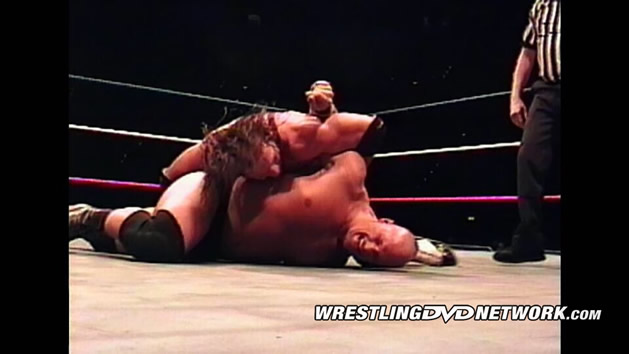 Aside from the fact that many of the matches don’t actually emanate from the Attitude Era, you can’t really complain about the match selections made here. Pretty much all of the matches feature at least one major star (the likes of Steve Austin, Bret Hart, Undertaker, Triple H, Mick Foley, HBK and The Rock) and in some combinations which we haven’t ever seen before – I don’t recall seeing other Triple Threat Matches with Steve Austin, The Undertaker and Bret Hart or Bret Hart, Shawn Michaels and Sycho Sid anywhere before. So, for me these are the real gems on this set.

Additionally, maybe you didn’t realize while simply looking at the match list, but the new DVD/Blu-ray features some historic encounters such as: one of the earliest Bret Hart vs. Steve Austin matches (a year prior to their WrestleMania 13 showdown), the match where Owen Hart broke his arm in 1996, the very first Undertaker vs. Mankind match… and that’s just THREE of them! 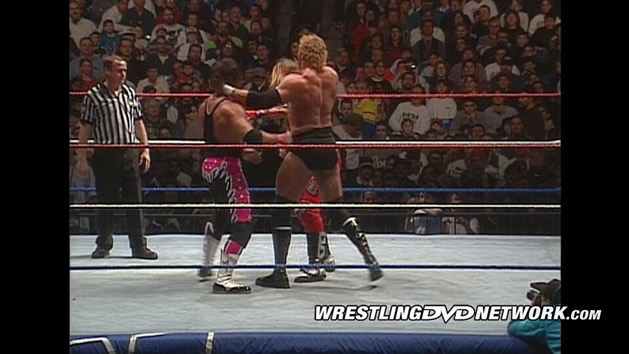 Because they are mainly from live events, the matches are all a decent length. An issue for some, especially during this era, was TV main events lasting less than five minutes. The shortest matches on the set are about five minutes but the average length of the matches are between 10 and 30 minutes – so there’s plenty of action for your money on this one!

All in all, I really did enjoy this release and I have no real hesitation in recommending that you too pick it up. Was it the perfect release? No. Were there elements which could have been improved upon? Yes. Was it a true “Attitude Era” DVD, no — but maybe as longtime WWE fans, we should be getting used to having the rug pulled out from under us.

This was a really enjoyable watch and the mix of never-before-seen and unique matches made the viewing all the more fun. So, if you can get past the name not quite matching the content and the fact that there isn’t any commentary (the two biggest negatives), then I’m sure you’ll it. 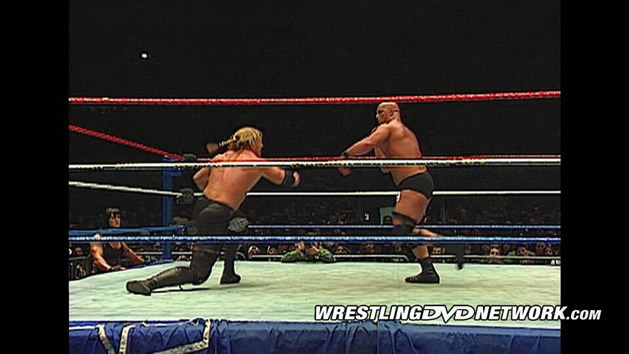 I really hope that you guys and gals enjoy this one and who knows, maybe afterwards we can look forward to future Unreleased comps with more rare matches from live events and television tapings – the possibilities are near endless! This is sounding like a fantasy that needs to be a reality…