Since I started writing for this site, I don’t think there has been a DVD release that has met as much derision as this new Batista DVD.  Since his return, he has really come under the wrath of a lot of wrestling fans.  I’m not going to pretend Batista is one of my favorite wrestlers (he is far from it), but the strong negative reaction has been a bit surprising.  We certainly didn’t need another Batista DVD, but a documentary following Batista’s return to the ring had potential to be interesting.  I don’t think this DVD is going to change anyone’s opinions on Batista the performer, but the interview may help give some new perspective on Batista the person.

Of course, we’ve already seen a detailed documentary on Batista’s career with the 2009 release I Walk Alone.  This short documentary serves as a nice companion piece to that one.  We start with a very quick rundown (about 3 minutes) of Batista’s career up until he left WWE in 2010.  The framing device of the documentary then revolves around Batista’s return to the ring at this past year’s Royal Rumble.  If you are a fan of getting a behind-the-scenes look at WWE live events, you are going to love this documentary.  There is a ton of backstage footage shown revolving around the Rumble, and it probably takes up about half of the documentary’s runtime.  I enjoyed getting a look at all of this. 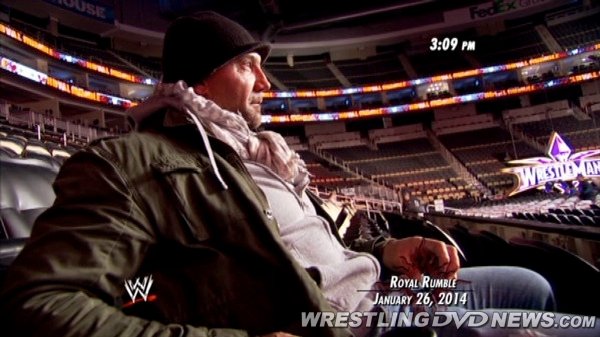 In between these segments, we are given interviews with Batista discussing his departure from WWE, what he has been up to since he’s been gone, and the decision to return.  Outside of a few short interview clips with his MMA trainers, Batista is the only person interviewed for the documentary.  This gave it a strong shoot interview feel.  It also didn’t hurt that Batista comes across as a very “no-nonsense” guy.  I don’t get the feeling that he was sugar-coating anything he was saying, so you really get a look at Batista’s thoughts on the industry.  His reasons for leaving were surprising at times; for example, one reason he wanted to leave was that he was struggling with the PG environment of the company.  He seemed genuinely happy to be returning, though.  On Piper’s recent shoot interview with Kayfabe Commentaries, he described himself as someone who loved the wrestling industry, but didn’t feel like it was the only thing important in his life.  I got the same feeling from Batista in this interview.  He clearly respects the industry, but it’s never going to be his entire life.

Your mileage will vary in regards to the segments on Batista’s life outside WWE.  Some time is spent discussing his MMA “career”, his love of cars, and his film roles.  If you are interested in these topics, then you will enjoy these segments.  But if you really don’t care about low-riders, for instance, you may get a bit bored during that segment.  None of these segments run all that long since the doc itself is so short, so even if you are bored by a segment, it ends pretty quickly. 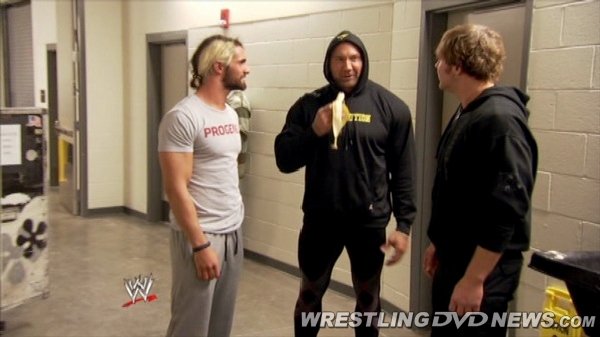 While I enjoyed the interview and the majority of the segments throughout the interview, it didn’t feel like it totally came together.  There was something missing, and I’m not 100% sure what needs to be added.  My guess is that there just needed to be a little bit more wrestling footage in the documentary.  It would have been nice to have some time dedicated to Batista’s career in late 2009-2010, when his previous DVD left off, rather than jumping right to when he quit.  This was a great run in Batista’s career, and would have given us a little bit more wrestling footage in the documentary.

The matches throughout this DVD can be grouped into 2 general categories: those that overlap with the time period focused on on I Walk Alone, and the matches from after that DVD’s release.  This pretty nicely breaks down in Discs 1/2 and Disc 3.  Since most of Batista’s best matches from 2002-2008 were already featured on his previous DVD, I was nervous that all of the matches throughout the first two discs would be total throwaways, especially since a lot of the matches were TV matches.  I was pleasantly surprised with the selection here, though.  A lot of the TV matches were given a good amount of time, and felt like significant matches.  Of course, there are exceptions.  The trios match from Saturday Night’s Main Event was very short and a big disappointment, and the matches from early in Batista’s career weren’t too exciting.  The other TV matches delivered, though.  The Triple Threat match was great, and the singles matches against Edge, Punk, and Jericho all were entertaining, even if they were fairly similar.  I don’t like Last Man Standing or Stretcher Matches much at all, so I didn’t enjoy these matches, but your mileage may vary on those. 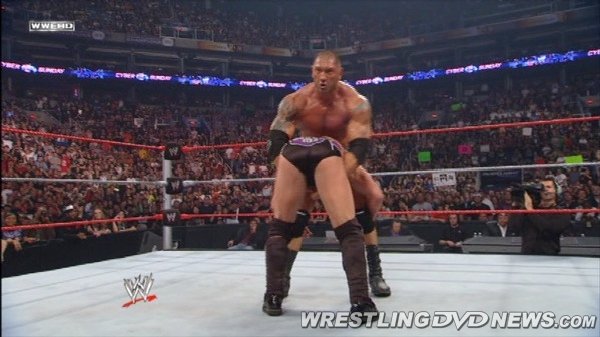 As far as the bonus matches go, I was most looking forward to what we were going to get on Disc 3, since there were no concerns with repeating matches from a previous DVD.  Unfortunately, these matches didn’t impress me all that much outside of Batista’s heel run in 2009-2010.  The two Mysterio matches are both pretty entertaining since Batista & Rey had such great chemistry.  The Triple Threat match with Orton and Sheamus also worked out pretty well, even if there isn’t anything “special” about it.  Of course, we’ve seen the I Quit match with Cena before, but this is a strong match.  The rest of the disc is pretty forgettable, and Batista’s return matches in 2014 are especially disappointing.

No, we certainly did not need three discs worth of content dedicated to Batista’s WWE return.  It can be a bit difficult to look at this DVD’s content objectively since it feels so superfluous in the first place.  In general, I did enjoy the documentary on the first disc of the DVD.  Yes, it’s pretty short, but you get some great backstage footage from Royal Rumble, and the interview with Batista is well done.  It feels much more in line with some of the recent specials we’ve seen on WWE Network, though.  I would have much preferred to see it put up there, instead of being given its own DVD.  The overall structure is pretty similar to the recent Daniel Bryan special on the Network, and I would hope that they will continue giving us specials like that on the Network instead of always putting them on DVDs.  I honestly wouldn’t be surprised if it pops up on the Network in the next few months anyway. 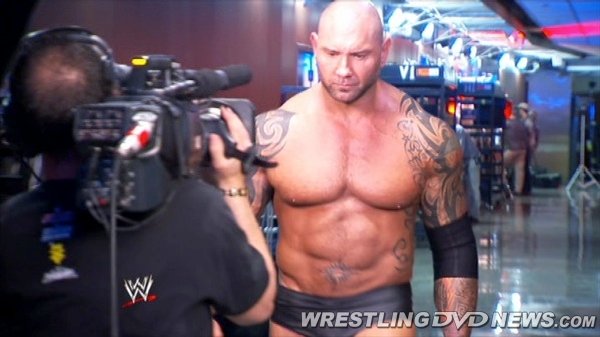 This DVD also runs into WWE’s recent decision to only give us “budget DVDs” or 3-disc sets.  I don’t think we’ve seen a 2-disc set since the Bobby Heenan DVD in late 2010, and it’s unfortunate those have gone by the wayside.  While I would most prefer this to just be a Network special, if it was going to be a DVD, then it should have only been a 2-disc set.  There were definitely a few good matches throughout the set.  While Batista’s matches are usually decent, they also have very similar beats.  Watching a large number of them in a row becomes very tedious, and this would have been a more enjoyable DVD if there were simply less matches.

Overall, it’s tough to really recommend this DVD, even though it isn’t as bad as most people are going to be make it out to be.  The matches are better than I expected, especially for TV matches, but they aren’t necessary.  I’d just wait for the documentary to show up on Netflix or the WWE Network and check it out that way.

Get your Batista “Animal Unleashed” DVD

– USA: This Tuesday! Gets yours now here on Amazon.com.