Pre-Release Review: WWE The Best of RAW – After The Show DVD

For me The Best of RAW: After The Show was a set which really intrigued me when it was first included as part of the October 2013 Fan Council Survey, and when it was actually added to the release schedule I was really excited to see the finished piece. Now-a-days us “hardcore” collectors crave unreleased and never before seen content and on the face of it Best of RAW: After The Show looked to promise a high proportion of never before seen material, and on that count this set most definitely delivers. 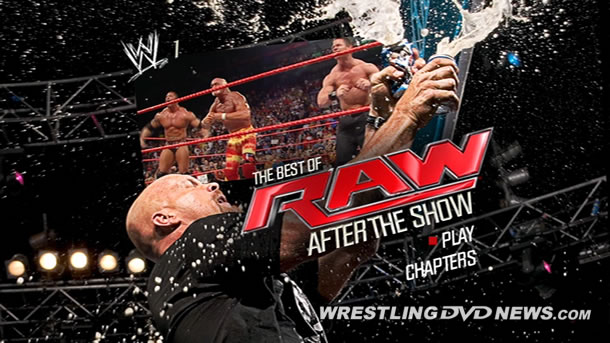 The set is packed with segments which were taped after the RAW television broadcast concluded, these segments are widely known as “dark segments”. These dark segments have only been released on a handful of DVD sets in the past and very occasionally on WWE.com. Often times the only opportunity to see this post-TV taping footage is when it pops up online, and of course as soon as it does it’s all over twitter, Facebook and the “newz” sites and we ‘rasslin fans jump all over it. This DVD set basically that footage, shot professionally rather than with a shaky cell phone from a cheap seat in the arena. 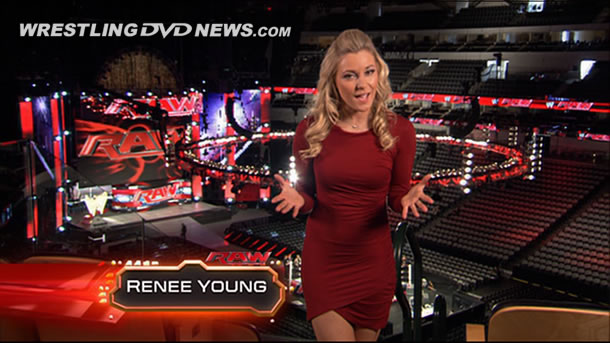 The host of the set is Renee Young, who hosts from a skybox above an empty arena while the crew are doing the last minute setup for a television taping (granted a post-RAW backdrop may have been a tad more appropriate with the ring-crew taking apart the ring etc. but that is really just me being picky). Renee is a great host, she always comes across as very personable and knowledgeable about the product which are great qualities for any host. 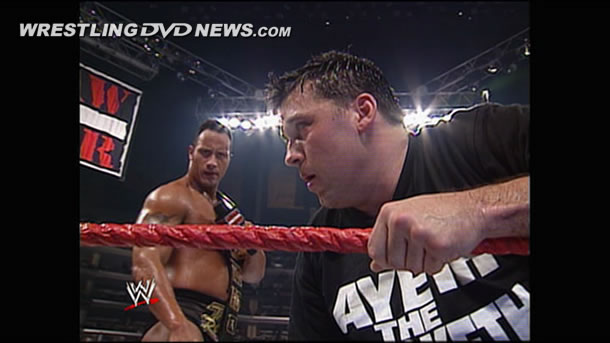 An important point to note about this release is that it does not feature ANY commentary on the segments or matches. As Renee Young explains in the open, it is the norm that the announcers return backstage as soon as the television taping has concluded. A way to look at the matches is that they are presented in the exact same way in which the live crowd experience them on that night. However, in saying that personally I would have preferred if WWE added some commentary on the matches at least. Given the selections which WWE made only five actual matches have been chosen, and this may have been by design with the lack of commentary. 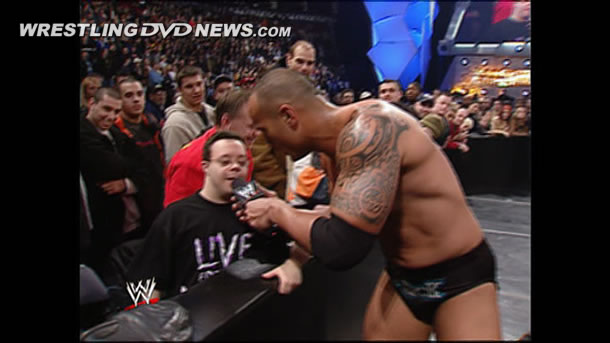 The DVD begins in 1999 with a segment following the Steve Austin, The Rock & Vince McMahon vs. The Undertaker, Triple H & Shane McMahon match from the highest rated RAW in history (May 10, 1999) and concludes; very appropriately with the WWE universe “Fandango-ing” as they exit the Izod Center at the post-WrestleMania XXIX RAW. 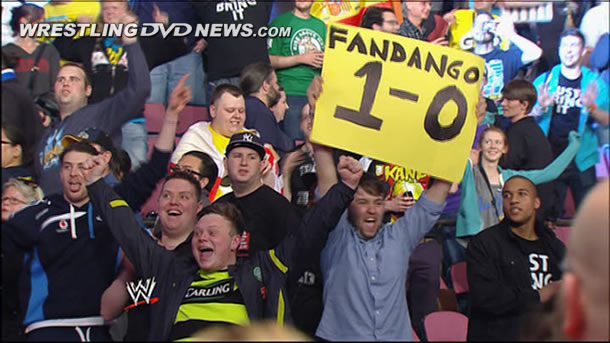 In total the DVD runs for six hours and forty minutes, which is really rather short (even by today’s standards) this is really rather regrettable, I would have happily sat through at least another hour of footage. The Blu-Ray version of The Best of RAW: After The Show has an additional 1 hour and 27 minutes of bonus material which includes two matches, the Bret Hart Appreciation segment and a collection of other segments. 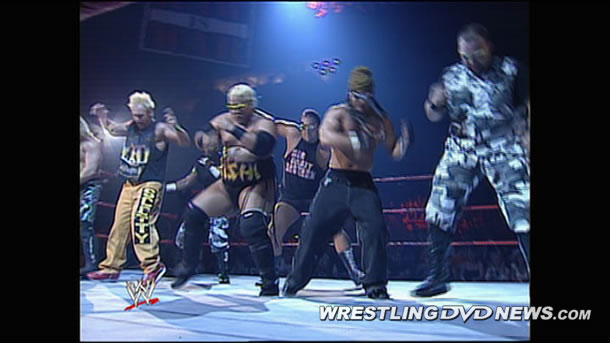 As is the norm with WWE DVD releases the set is presented in widescreen format and the older (4:3) footage is pillar-boxed with black sidebars, which I know is preferred by a large percentage of readers here over “patterned” bars.

The Best of RAW: After the Show is made up from mainly off air segments rather than matches, these segments vary in length from a couple of minutes through to one instance which exceeds 40 minutes! I’m not going to go through each and every segment on the set, however I will give you a quick recap of my personal favorites, but I will keep it brief as I believe the best way to enjoy the segments is in full retaining the element of unexpectedness which really adds to their uniqueness. 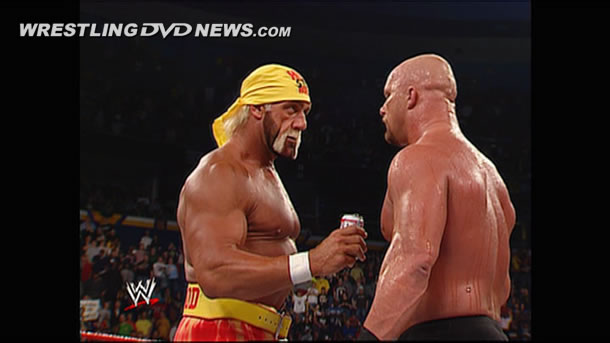 “Stone Cold and Hulk Hogan share a cold one” 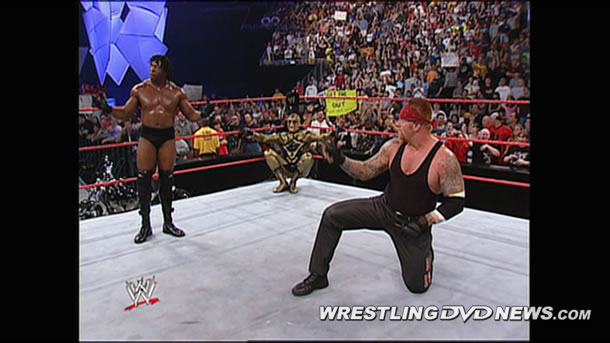 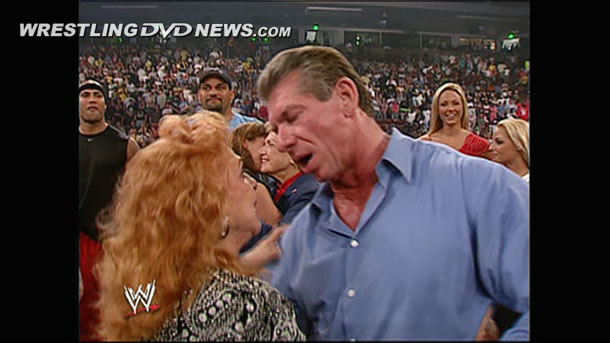 This was a very cool moment as many of the WWE roster members lead by the Chairman of the Board came out to celebrate the 80th Birthday of arguable the greatest female sports entertainers – The Fabulous Moolah. Judging by the looks on many of the guys and girls faces this was a very cool moment for them and an incredible emotional moment for Moolah herself in her home town. 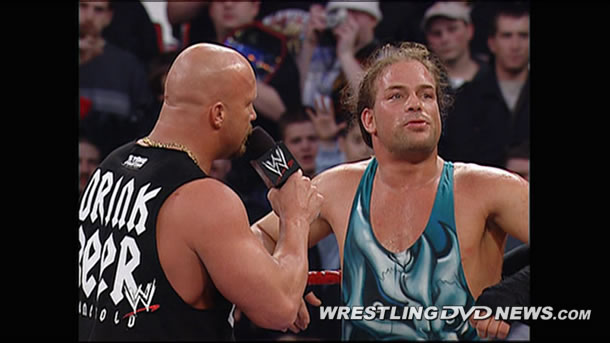 This is the longest segment on the set at more than 40 minutes; it primarily features Stone Cold Steve Austin, Booker T, Rob Van Dam and Lillian Garcia, but also does involve a number of other WWE production staff and provides lots of laughs and results in the drinking of quite a few beers. 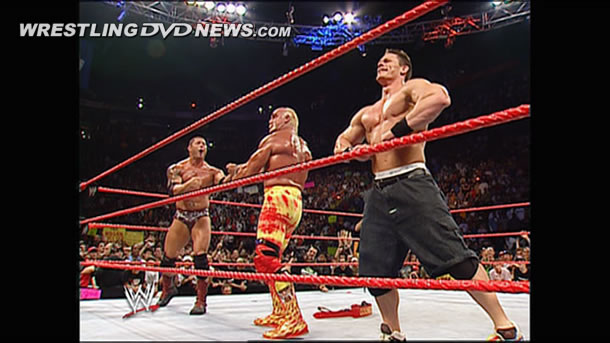 Again this is a self explanatory, it features arguably the biggest star in WWE history, accompanied by two of the biggest stars in the company (at the time) celebrating a victory, they are even joined by a rather dedicated member of the WWE Universe as well. 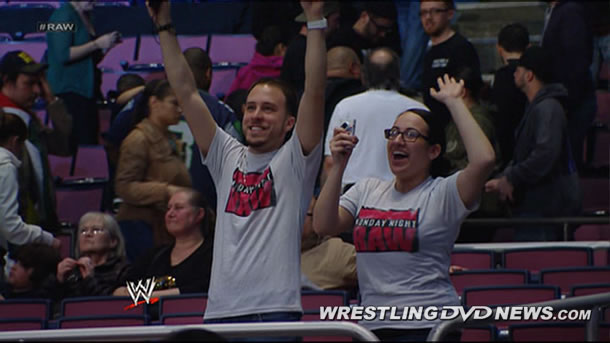 The closing segment for the set comes from the post WrestleMania XXIX RAW, and basically features the fans “Fandango-ing” as they file out of the Izod Center – this was a really appropriate closing point for the set. 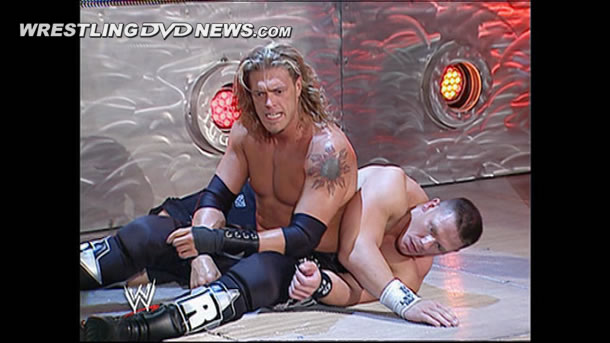 As I mentioned earlier there are only five matches featured on the set, all of which are located on disc three. Of the five matches my favorite would be the Edge vs. John Cena “San Antonio Street Fight”, the match which I enjoyed the least would easily be the Randy Orton vs. Triple H encounter, which did include a chin lock which felt like it lasted FOREVER! Historically speaking there were two other matches, the first being the Cena/Punk showdown from the week prior to Money in the Bank 2011 and the 6-Man Tag from after WrestleMania XXVIII where the “Yes Movement” had its roots. 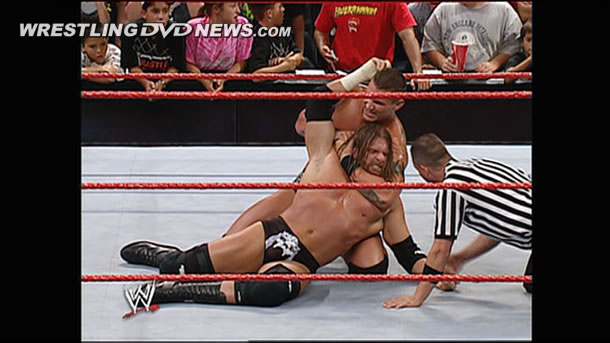 In conclusion, I really enjoyed this release. I loved its uniqueness. If I were trying to be critical the one flaw with the set that would be that there is no exposition to the segments, they simply begin with a number of superstars in the ring. This means that you almost have to be aware of what was happening in the company around the time.  A great way to combat this would be to include a minute of two of the RAW broadcast before each “After the Show” segment begins helping set them up. While this didn’t really matter for some matches/segments/moments it really would have been a welcome addition to others. However this really is a small point and I don’t believe it will hurt your enjoyment of the set too much. 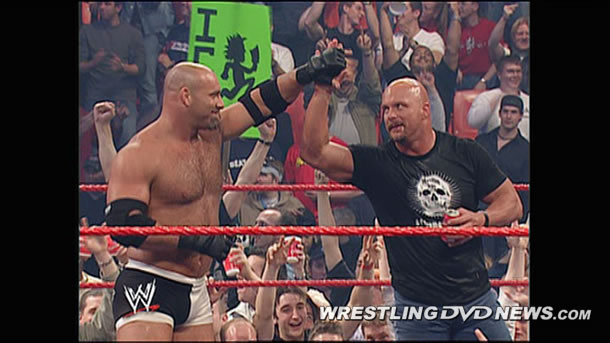 If you are really into matches and not so much talking, I could see you not enjoying this set as much, personally I really like (interesting) talking segments and so I really loved this set and can’t recommend it highly enough. I’d say you should definitely pick up a copy when it is released in a couple of weeks.

Pre-order your copy of RAW – After The Show…