2014 will be forever remembered by wrestling fans for 5 things (thus far) 1. The launch of the WWE Network, 2. The Undertaker’s Streak being broken, 3. The “Yes” movement, 4. The Warrior’s return and untimely passing, and 5. Sting finally with WWE!

A Sting WWE DVD release was rumored as far back as 2008; even when Sting was still heavily involved with TNA. Fast forward a few years and in October 2013 the idea of a Sting DVD was brought up again on a WWE Fan Council survey (a survey which in hindsight featured the vast majority of 2014’s WWE DVD releases – have another look at it). 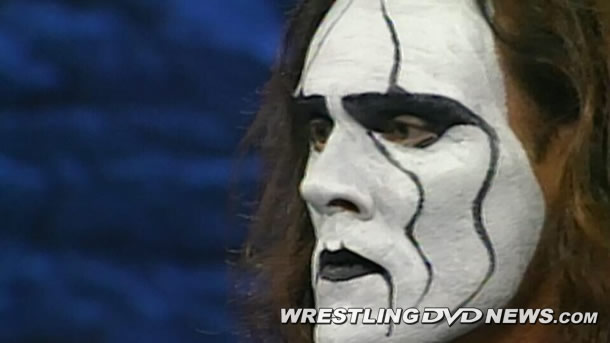 As you will probably know, Sting has never been involved with WWE and throughout the years fans have almost salivated at the prospects if it ever did happen. The Sting character has even almost developed into an enigma to the WWE Universe, coupled with the fact that WWE would always refer to Sting in the highest regard on DVDs and WWE.com pieces; even when he continued to work for TNA (something we haven’t really seen before).

When the prospect of WWE and Sting working together came about in early 2014 the anticipation was reaching a fever pitch, most evident with the WWE 2K15 trailer, Comic-Con and even the WWE Network documentary – “Warrior: The Ultimate Legend” (for which Sting was interviewed). So, as with the other Sting/WWE projects thus far, this DVD set was highly anticipated and thus promised to be one of the bigger 2014 releases. (In fact the Blu-ray version is currently ranked #1 in the Amazon.com best selling sports category!) 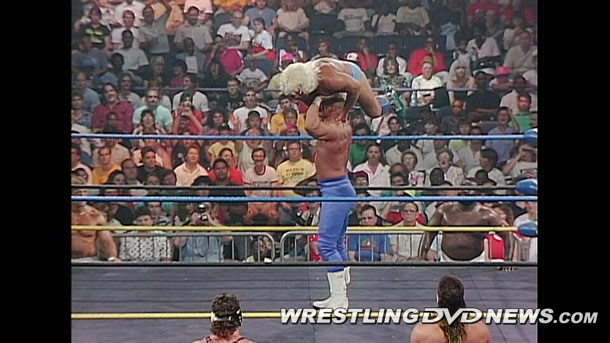 The total run time for the DVD set is roughly seven hours and 10 minutes, with the Blu-ray version having an additional one hour and fifteen minutes of mainly promos and interviews (with a couple of matches thrown in). As is the norm, the video is presented in 16:9 widescreen format, with the matches having plain black sidebars. All of the video package footage is either native 16:9 or is “panned and scanned” to fill the 16:9 aspect ratio. 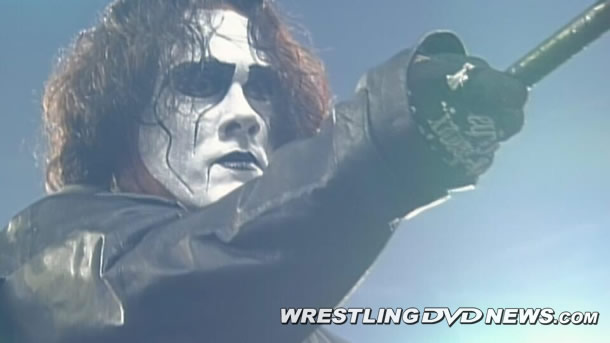 The Best of Sting is obviously a match compilation set, however the set does feature “documentary” style video packages which comprise archive interview footage of Sting taken from WCW interviews in 1995 and 1998 (the latter coming from the “Sting Unmasked” VHS release). In addition to archive Sting, the set also includes a number of interviews with other personalities discussing the Stinger and aspects of his career and personality.

Some of those interviewed include: Hulk Hogan, Scott Hall, Lex Luger, DDP, Kevin Nash, Kevin Sullivan and Tony Schiavone, in addition to a handful of modern day WWE superstars such as: Natalya, Brodus Clay and Dean Ambrose. These video packages are interspersed between the 32 selected matches (with an extra 3 on the Blu-ray exclusives) which come from the UWF and WCW between 1986 and 2001. 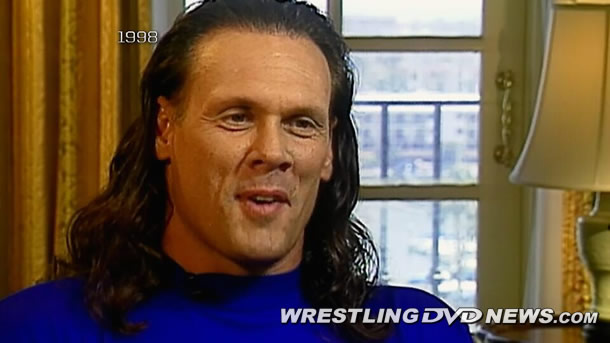 The matches themselves are an eclectic bunch. They vary from some of the more known and high profile Sting matches, like Starrcade 1997 and The Great American Bash 1990 (side note: did you know that the Great American Bash match with Ric Flair has been released on THREE WWE DVDs this year?), right through to some rare and completely forgotten bouts such as the 1990 match verses Dutch (Zeb Couler) Mantel and a WCW Main Event match against The Midnight Express’ “Sweet” Stan Lane. 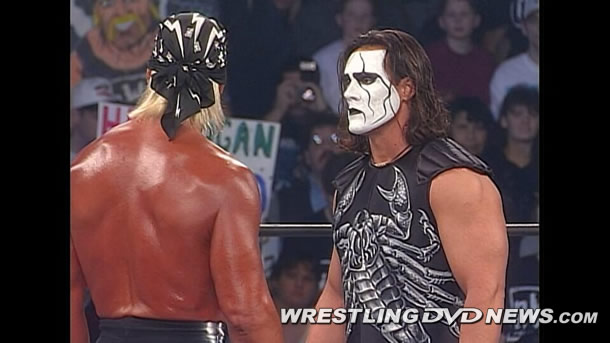 Personally speaking, the highlights on the set for me had to be the very early Sting vs. Ric Flair match – the only disappointment on that was the fact we didn’t get a finish (as was common with NWA television regretfully “we [were] out of time!”). Other personal highlights were The Great Muta match to determine an undisputed TV Champion following the disputed finish from the 1989 Great American Bash, and the WCW Saturday Night 8-Man Tag Team Match from 1992. 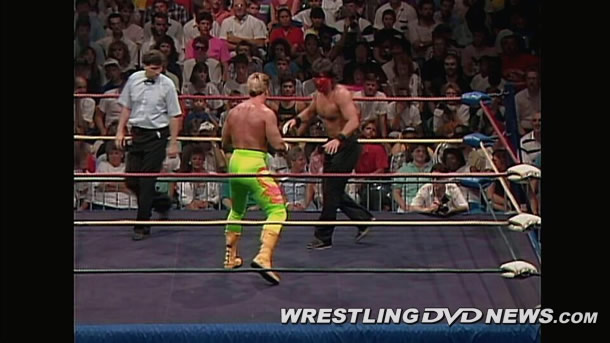 I did enjoy the selection of bouts which were chosen for the DVD. I love DVDs which feature a random collection of matches. However, one tiny issue which I have with the set is: was this truly “The Best of Sting”? Do not misunderstand me, I would much rather have a compilation in this ilk over a collection of matches we have had so many, many times or even lots of matches which are now available on the WWE Network. Maybe the title of the set could have had a little tweak to better represent the content – maybe something like “This is Sting”? instead?

Also, it feels like a couple of Sting’s feuds were ignored or neglected; namely his feud (and team) with Lex Luger, his rivalry with Rick Rude and even his legendary (and awesome) series with Big Van Vader could have been given a little more love. Maybe a couple of these matches could have replaced a few of the “filler” matches with the likes of Butch Reed? 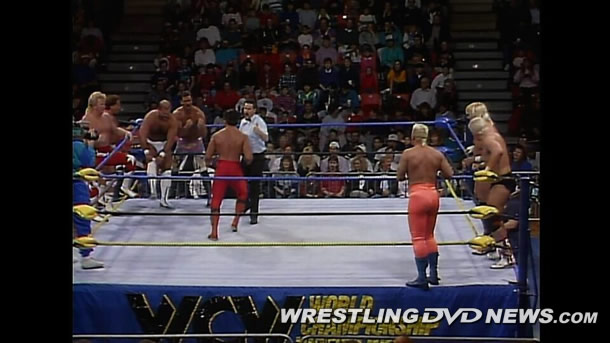 Overall the set was a fun trip through the Stinger’s past and also achieves its job of providing insight into just who Sting is. I always looked at this set as WWE’s way to educate their “universe” to Sting and his importance to wrestling. We have seen over the years that the WWE philosophy looks to be: if it didn’t happen on our TV, fans will likely have no knowledge of it.

This is certainly not the end of WWE – Sting DVDs; I really see this as the first in a series of Sting sets and I fully believe that when Sting’s story has an appropriate “WWE ending” (i.e. a Hall of Fame induction and/or WWE match) we will get the full blown career documentary that everyone is really hoping for. Plus not having Sting interviewed on this set has made us fans want it even more now…. 😉 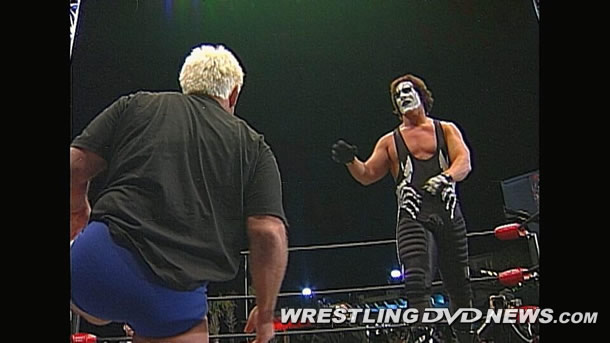 If you like Sting and liked World Championship Wrestling then I’m sure you will love this DVD and its match choices; whether you are a casual collector, WWE Network subscriber or even a hardcore WWE DVD collector this set will appeal to you.

I hope you really enjoy(ed) “The Best of Sting” WWE DVD as much as I did. If you haven’t picked it up yet, what are you waiting for? Get your copy using the links below.

Get your “Best of Sting” WWE DVD or Blu-ray…

– USA: In stock now here on Amazon.com and WWEShop.com.