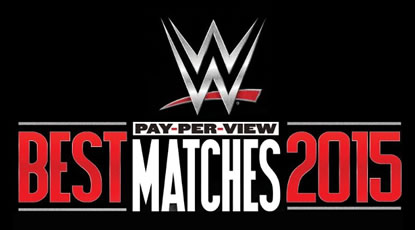 Just hours from the very first Pay-Per-View spectacular of 2016, what better time is there to look back at the previous year’s greatest Pay-Per-View matches?

This year the “Best PPV Matches” release returns for fans WORLDWIDE! Sadly we’re without a Blu-ray version again (especially as all the matches and segments were recorded in high definition — but hey, that’s another rant for another day). The Best Pay-Per-View Matches DVD is packed with sixteen matches from between January and October 2015. The set is hosted by Corey Graves (who makes his WWE DVD hosting debut since becoming a part of WWE’s broadcast team). 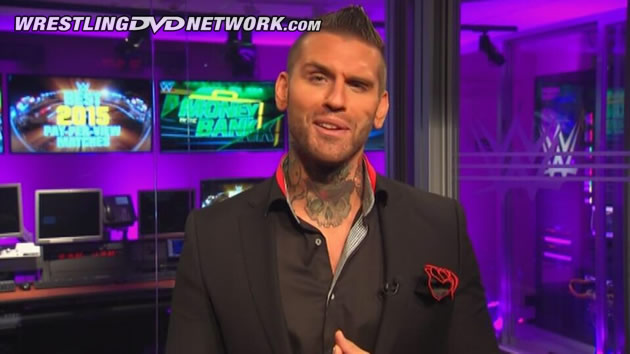 A few points to note about the DVD, firstly all of the screen clutter has been removed from each match – that includes hashtags and WWE logos, which is nice. Also another new addition to the PPV matches DVD this year is a series of video recaps of each PPV event. These are great and really provide a good overview of each event. The videos add a lot to the compilation and take it from matches thrown on a DVD to a more finished and complete set.

However, a real true negative of this set is that it abruptly ends in October – last time I checked a year ran all the way through to December. Sadly, WWE’s usual rush to get this DVD out as soon as the calendar changes results in a couple of missing months. Even if WWE could manage to just squeeze on two video packages for the Survivor Series and TLC that would make the set feel a little more rounded and like the last two months of the year weren’t completely forgotten! But hey, I doubt that WWE will change their thinking when it comes to this, so let’s all just move on.

It’s often hard to beat the Royal Rumble match to win “match of the evening” at the Royal Rumble event; in fact I only recall a handful of matches that were better than the Royal Rumble and this Triple Threat Match is most definitely on that list! This match was awesome – a thrilling 20 plus minute encounter which had everyone on the edge of their seats from the opening bell. How couldn’t this match be one of 2015’s “best”? 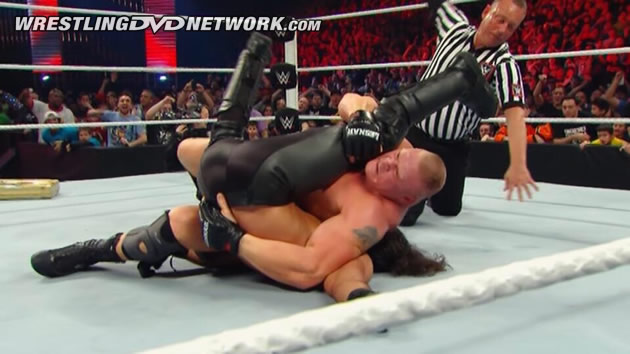 For the second consecutive year, the Royal Rumble match left a little bit of a sour taste in the mouths of fans around the world. In 2015 however WWE attempted to “put things right” by having the Rumble winner – Roman Reigns defend his WrestleMania main event shot against Daniel Bryan. I would like to think that I am bigger than making a comment about this match being used to make Roman “look strong”, but I’m really not! 😉 This one was intended to make Roman look strong heading into WrestleMania at ‘Silicon Valley’ and Bryan helped Roman greatly, as these two warriors put together a really awesome match. Sure many of us didn’t really think we’d have Daniel Bryan vs. Brock Lesnar at WrestleMania 31, but they sure had me a couple of times – as a fan you really can’t ask for much more. Really, really awesome match here – both Bryan and Reigns headed into WrestleMania looking strong. 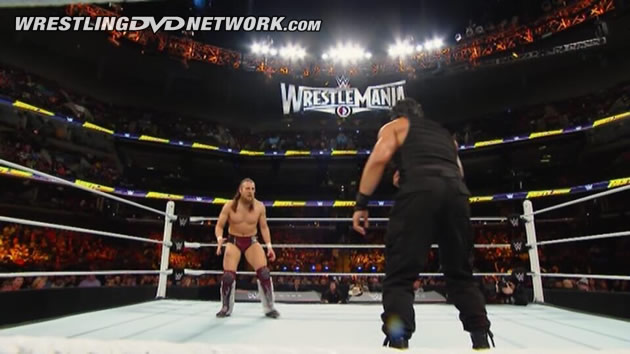 Honestly, I wasn’t too sure going in what kind of match this would be, and frankly I was very presently surprised as what we were given was a really great WrestleMania main event, from the drama and brutality of the Lesnar vs. Reigns portion, to the shock and awe of the Seth Rollins cash-in. This might have been one of the most iconic MITB cash-ins (and possibly a good point to let the concept die — or at least take a break). Great match and a great way to close out a fun WrestleMania card. Plus, let’s not forget this match also gave us the immortal “Suplex City” line! 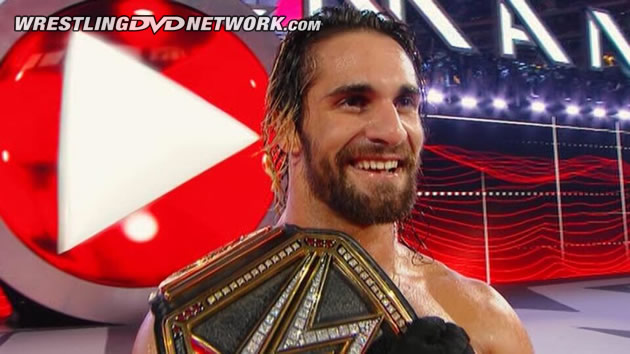 Was Elimination Chamber actually a Pay-Per-View? Technically I don’t believe it was available via traditional PPV (at least domestically) but hey, I guess when you have a match the caliber of Owens vs. Cena, it definitely warrants release as part of a “Best of 2015” set.

This one was great and most definitely the show stealer. Deep down fans worldwide never really expected the newly debuting Kevin Owens to pick up a big “W” — especially given that he was taking on “Mr. WWE” John Cena. This one (at least at the time) was a star making performance for Kevin Owens, maybe the follow-up wasn’t quite what it should have been, but just looking here at this match, it was as damn near five stars as you are ever going to get. 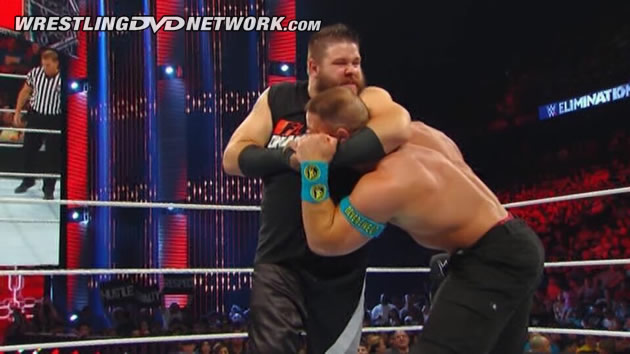 The Divas Revolution comes to the main WWE roster! Just weeks after Charlotte, Sasha and Becky were brought up from NXT, the ladies (well two, at least) had the opportunity to shine on the grandest stage. Well, Battleground.

The NXT women arrive on the main WWE stage and bring with them a so-called “Divas Revolution” just days after Charlotte, Sasha Banks and Becky Lynch show up we were given this three-way match. Sadly the match pointed out that the main roster divas (namely Brie) are just a step or two behind the NXT divas. Granted this match wasn’t as good as some of the NXT outings we’ve seen the ladies have, but hopefully this is the first step down the long road. 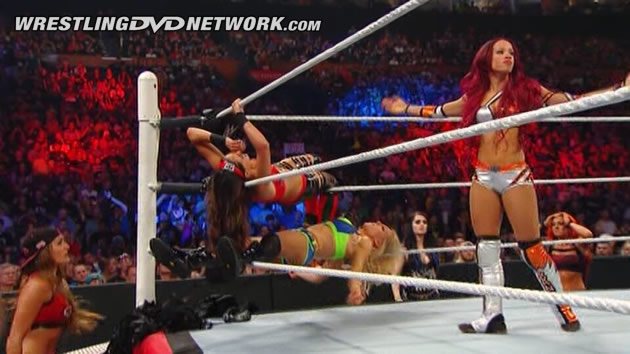 2015 will be forever remembered by wrestling fans as the year that we FINALLY got to see the Stinger wrestle inside a WWE ring. Sadly however it might have been the one and only year that we see Sting inside a WWE ring, and maybe we’ll never ever get to see that fabled Sting vs. Undertaker showdown we’re craving. What we did get was a great Sting vs. Seth Rollins matchup. This was great, great stuff and other than the scary power bomb into the corner spot Sting and Rollins put together a really awesome match; Rollins managed to hide the older Stinger’s weaknesses perfectly and both guys looked great. 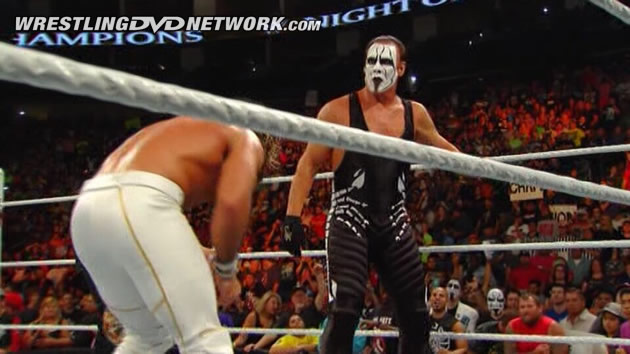 For me, The Undertaker and Brock Lesnar’s epic SummerSlam showdown will be forever tainted by it’s near ‘botched’ screwy finish. However both guys had the opportunity to eradicate memories of that finish by redeeming themselves with a ‘Hell in Cell’ match. Taker and Lesnar’s previous Hell in a Cell (No Mercy 2002) was epic, but after thirteen years could these two juggernauts equal (or even surpass) their previous Hell in a Cell encounter? Simple answer… Yes. This one featured it all: violence, blood and that all-important ingredient: DRAMA. This was a great match with a really unexpected and unique finish; both guys deserve all the respect of the wrestling fans. Also, in the modern era, it’s nice to see a rivalry worthy of being inside the Hell in a Cell actually end up inside the Cell. Even though it’s only October, this match was a great way to close out this DVD. 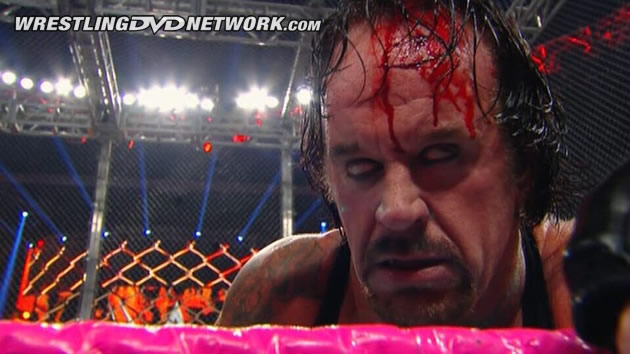 Overall this is a really good DVD set – each of the matches included vary from good to great. Historically we always got at least one or two matches that we all thought “why is this match on here?” but this year all of the matches featured warrant inclusion. The only real downside of the DVD is exactly that – it is a DVD only release. Whether it is attributed to low Blu-ray sales or some other unknown reason, it always perplexes me that the two releases each year which comprise entirely brand new high definition footage (“Best PPV Matche”s and “The Best of RAW & SmackDown”) are the two which aren’t actually released in HD on Blu-ray.

If you are a collector who doesn’t pick up all the monthly PPVs anymore, I’m sure you will love this set. The addition of the video packages for each show really add a lot and make the set feel like a more comprehensive look back at the year. That, coupled with the fact that all the matches are pretty damn good means that this set is easy for me to recommend – so pick it up now!

– USA: Right now! The DVD is in stock here on Amazon.com.