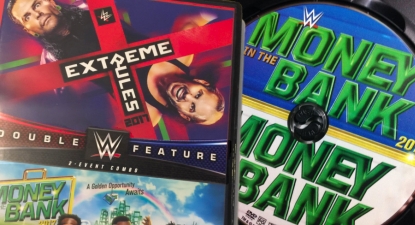 The Superstar Shake-Up had long been in the rear-view mirror by the time June rolled around, but its after-effects on the RAW and SmackDown brands were and still are being felt, especially on Pay-Per-View. Though the influx of name talent has kept things feeling fresh on the red brand (along with the returns of the Hardyz and Finn Bálor, it has to be said), SmackDown Live has suffered from baffling pushes, wafer-thin feuds and disappointing matches.

The trend continued at Extreme Rules and Money in the Bank. The former didn’t meet expectations of past Extreme Rules events, but it was still a fun night with several standout matches, with a great main event shining in particular. As for Money in the Bank: the hype was largely around the first women’s MITB match and ultimately became a big disappointment, whilst the men’s MITB clash delivered strong action with a slightly underwhelming finish, and the WWE Title clash between Jinder Mahal and Randy Orton evoked memories of JBL’s WWE Title push in 2004 on a SD roster containing Eddie Guerrero, The Undertaker, Kurt Angle, Booker T, Rob Van Dam and others.

That quickly sums up the shows, but here I’ll break down the card found on each disc, bout-by-bout. Let’s take a look at the “Double Feature: Extreme Rules & Money in the Bank 2017” DVD! 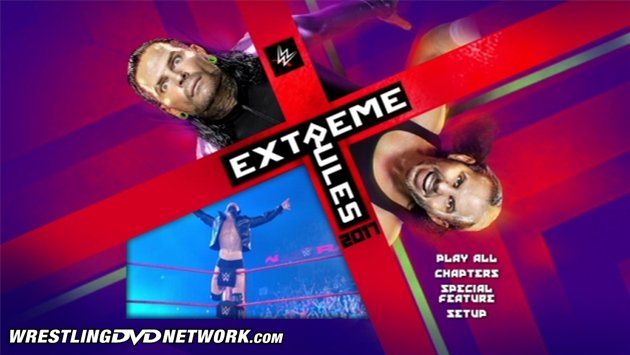 Extreme Rules has lost some of its edge in recent years; after all, how extreme can WWE go in the PG era? There have been a fair few hair-raising moments along the way, however; Brock Lesnar pummelling John Cena into a bloody mess, Daniel Bryan sending Kane through a (partially) burning table and Dean Ambrose slamming Chris Jericho down onto thumb tacks stand out from the last couple of Extreme Rules shows. More importantly, the action has generally been of a high standard at the gimmick-themed PPV, and that proved to be the case again this year.

This is probably the best of the Ambrose vs. Miz matches (and there have been many) that we have seen on television and Pay-Per-View this year. It’s nothing exceptional, but it’s a well-told story leading to Miz regaining “his” title. On a side note, it’s a shame that Miz’ entertaining celebration ceremony from RAW the following night isn’t included as a DVD extra. 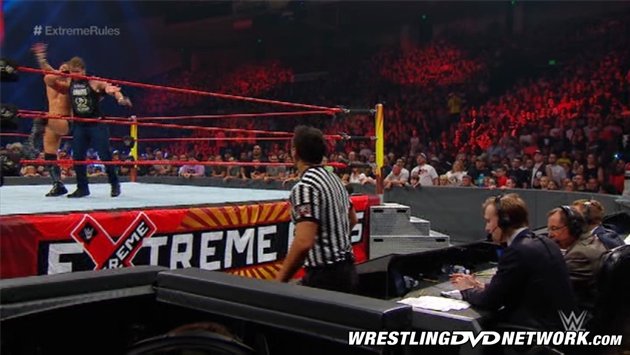 If nothing else, this match provides a PPV debut for Noam and some exposure for Rich after a few barren months (which were partly due to injury). Swann and Sasha seemed to work well together here, so it’s a shame (for Swann, anyway) that their on-screen partnership ended here just days after it began.

I assume that this match was cut for time, because the presentation of this makes Bayley look totally irrelevant. Between this, her previous hometown defeat to Alexa at Payback, the This Is Your Life segment on RAW the previous Monday and the boos she received in her pre-match interview here, it marked a new low for The Hugger, and her career hasn’t recovered since (especially since a separated shoulder has just scuppered her SummerSlam title shot at Little Miss Bliss). 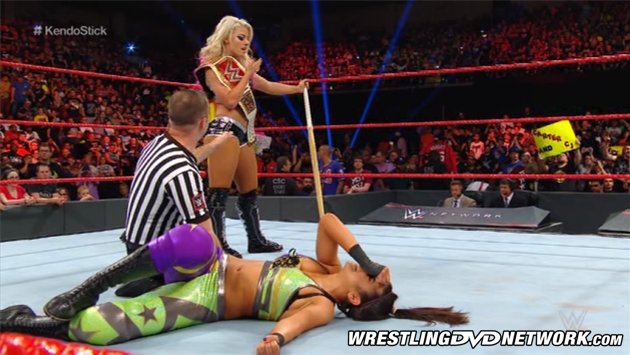 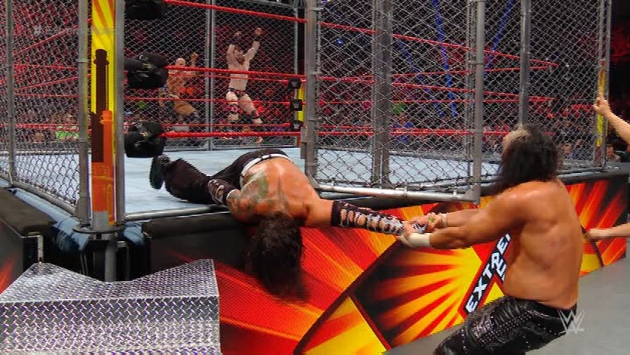 Fortunately, the subsequent Steel Cage clash between Sheamus and Cesaro (Shesaro?) and The Hardyz is a great battle. It has simple psychology but is very well-executed, and keeps fans waiting for the inevitable high spot involving Jeff, as well as having a dramatic finish.

This is another good match, but one which suffers from a lack of crowd heat. Perhaps the audience were burned out, or perhaps they didn’t care either about the cruisers or about the submission stipulation being applied to the high-flying division. Either way, this stands out as being Austin’s last WWE match as he was released from the company in early July (the reasons for this depend on who you wish to believe). 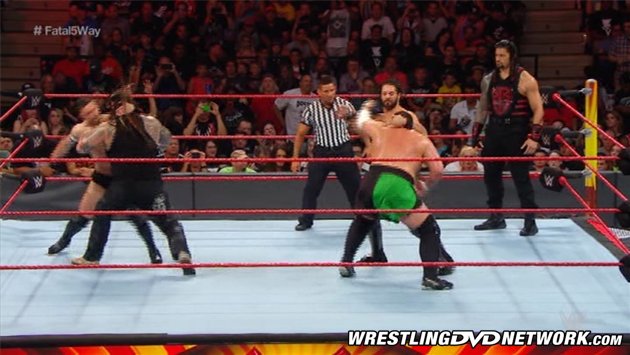 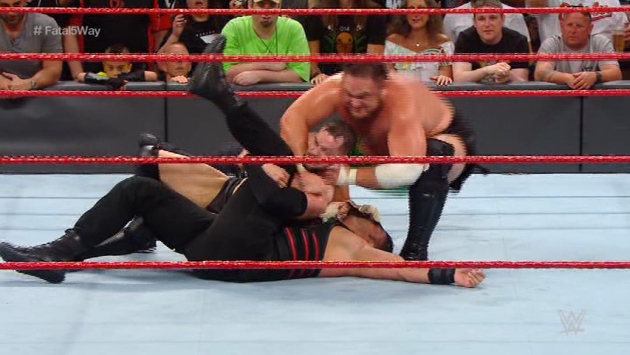 Extreme Rules Match To Determine The #1 Contender To The Universal Championship
Roman Reigns vs. Seth Rollins vs. Finn Bálor vs. Samoa Joe vs. Bray Wyatt

Extreme Rules ends on a high with the five-way showdown to determine Brock Lesnar’s next challenger. Each competitor had a persuasive reason to back them, keeping the outcome unpredictable. In addition, the action is of the highest standard, and coming in at nearly 30 minutes, it’s one of the top WWE PPV main events of the year! 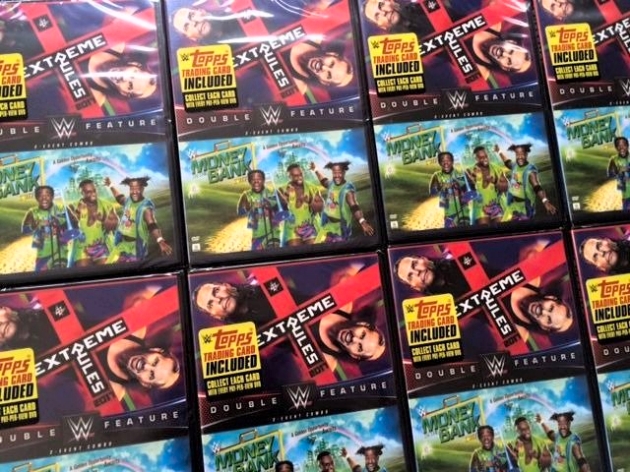 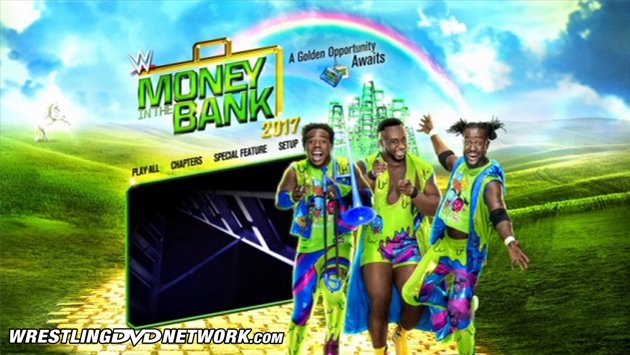 As noted, Money in the Bank is a rather lacklustre show. On paper, the two MITB matches and the WWE Championship rematch (which potentially set up hometown hero Randy Orton regaining the gold) sounded appetizing, but in practice the show ended up being inferior to the previous SmackDown-only PPV Backlash. And here’s why…

Money in the Bank Ladder Match
Charlotte Flair vs. Becky Lynch vs. Carmella vs. Natalya vs. Tamina

Although the biggest out-cry about this match concerned how Carmella (or more rather James Ellsworth) obtained victory, I was more disappointed with the match itself. It was a commendable effort, but it felt like it ended just as things were really heating up; with five or six more minutes, this might have reached expectations. As it is, this is inferior to the rematch held on SmackDown nine days later. Again, DVD extras come to mind. 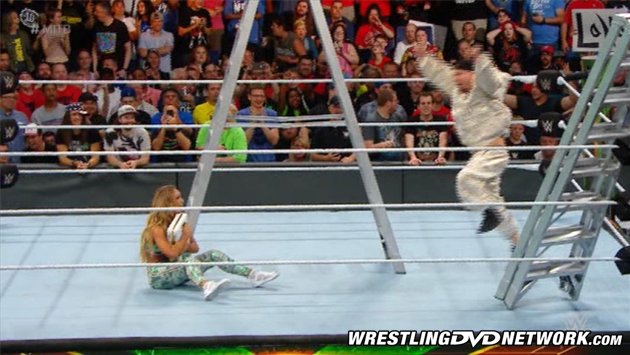 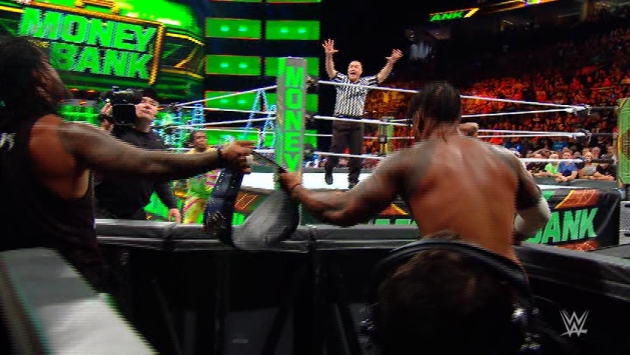 This is a fun doubles outing between two teams that nearly always produce the goods on Pay-Per-View. It isn’t quite as good as their recent follow-up at Battleground, partly due to the finish, but it’s still well worth watching.

This is pointless, to be honest. It either had to be a complete squash (as in, 30 seconds or less), or Lana had to deliver a performance that would pleasantly surprise everyone watching. Instead, it just feels like a second-rate title match, and does neither competitor any favors. Lana’s entrance music is awesome, though. 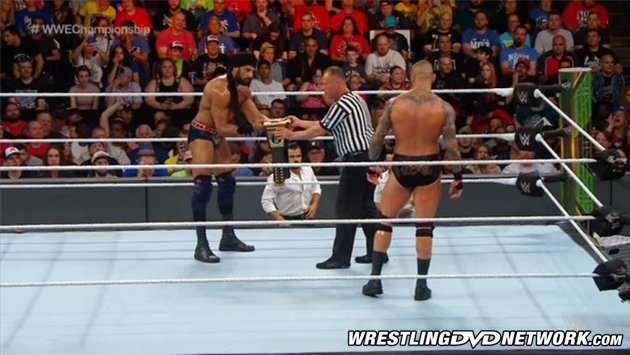 After Maria and Mike Kanellis make their WWE return and debut respectively, we get a rematch from Backlash between Jinder Mahal and Randy Orton. As with their Backlash bout, it’s not bad, but it’s not particularly interesting either. The add-ons (the legends in attendance and the interfering Singh Brothers) enhance the match, but the finish is too similar to their Backlash encounter.

Breezango vs. The Ascension

This match seemingly ended the whodunit concerning which person or people destroyed Breezango’s office, though post-MITB developments proved that this wasn’t the case. It’s still amusing to watch, though not as entertaining as Breezango’s previous clash with The Usos at Backlash. 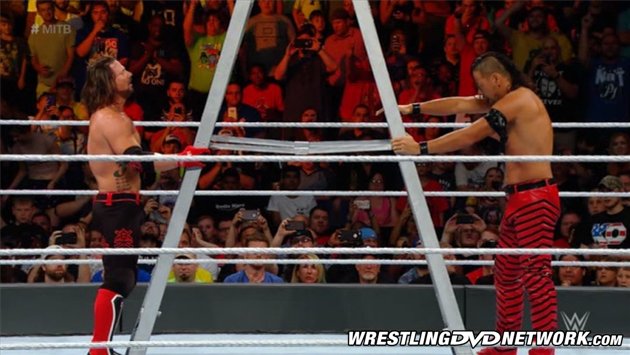 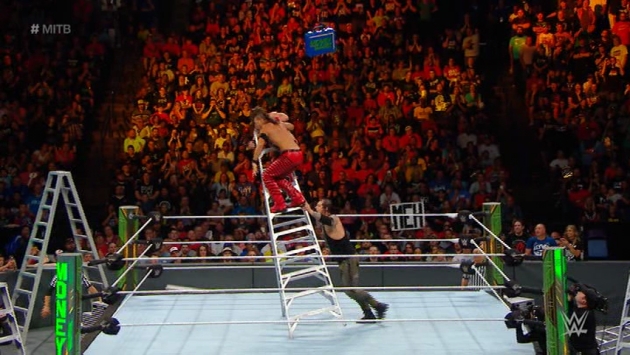 Money in the Bank Ladder Match
AJ Styles vs. Shinsuke Nakamura vs. Sami Zayn vs. Kevin Owens vs. Baron Corbin vs. Dolph Ziggler

Compared to past Money in the Bank events, the 2017 edition had been something of a let-down up until this point. Thankfully, the main event ends things on a fairly high note with some great spots and memorable moments. Some may disagree with the outcome, but one definitely cannot fault the effort or the action in the body of the match.

The bonus features consist of the Kickoff Show bouts from each card: Kalisto vs. Apollo Crews and The Hype Bros vs. The Colons. Both are entertaining filler, but nothing more.

Watching Kalisto vs. Crews now in early August makes it seem like a lifetime ago, since Kalisto has been absent from television and the Titus Brand has focused more on Akira Tozawa in recent weeks. 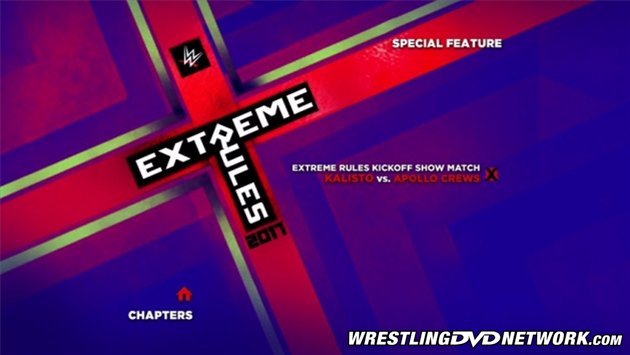 This “Double Feature” DVD highlights the ever-growing divide in quality between RAW and SmackDown since the Superstar Shake-up after WrestleMania 33 (and this will be even more noticeable when we get the twin-disc set for Great Balls of Fire and Battleground).

Extreme Rules 2017 isn’t the best show of the year by any means, but there are several high-quality matches including a memorable main event, whereas Money in the Bank 2017 is basically a one-match card, and even that one match isn’t the greatest MITB bout that we’ve seen. If you happen to find this “Double Feature” for a reasonable price, then there is enough worthy action to justify a purchase, but otherwise I would suggest that you use the Network to catch up with these shows.

So what did you think of Extreme Rules and Money in the Bank? Together do they make a double pack worthy of your DVD collection? Let us know by leaving a comment! 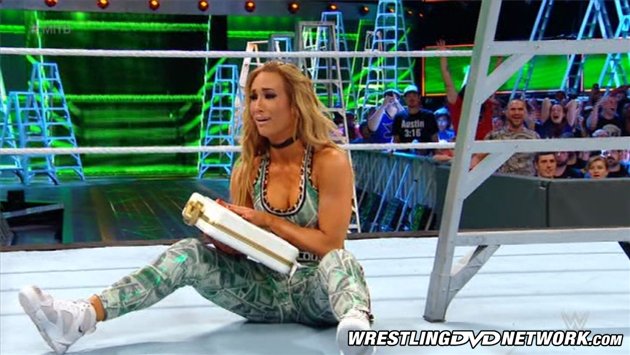 – UK/Europe: Next Monday! Grab the next “WWE Double Feature” DVD here on Amazon.co.uk.

– Australia: Next Wednesday! Get the next “WWE Double Feature” DVD at Madman.com.au.