John Cena has had an unusual career. His first few years and his controversial rapper persona saw him achieve great popularity with the 18-35 crowd, only for him to then become a target of ridicule during his lengthy period on top of WWE, at which point he became a superhero-style figure to younger viewers. But once he exited the main event picture on a permanent basis, he began demonstrating more of his in-ring repertoire against many of WWE’s rising stars, which breathed new life into his work. The upshot is that 2015 onwards became a peak period for John from an artistic standpoint, and it is this range of years which is under the spotlight for Cena’s newest profile DVD from WWE.

“John Cena: Hustle, Loyalty, Respect” is another two-disc set, which seems to be the norm for the most part amongst modern compilations. That’s quite sad, because it’s a sign of the reducing focus of home video releases by WWE. Still, amongst the two discs, there is still room to include some gems, and that is definitely the case with this new profile on Cena, which we’ll now look at in greater depth. 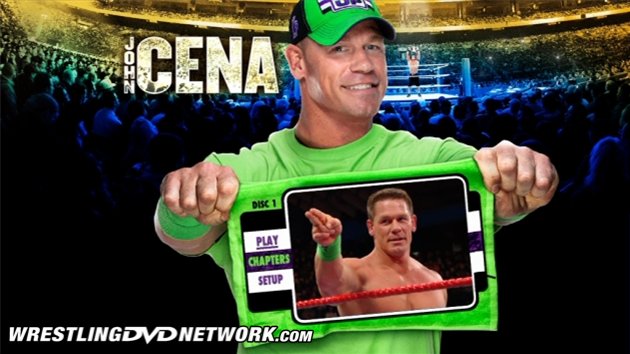 YOU CAN SEE THIS!! Grab the latest Cena DVD on Amazon.com (USA) or Amazon.co.uk (UK).

We open with Cena dethroning Rusev to win the United States Title at WrestleMania 31. It’s an underrated battle, accompanied by one of the all-time great ‘Mania entrances as Rusev arrives on a tank! The match itself is enjoyable; it’s not a classic by any means, but it exceeds expectations, and Cena ends Rusev’s long undefeated record with a victory here. The next night, Cena would initiate the United States Championship Open Challenge, which is the basis for most of the remainder of disc one.

I’m surprised that this match made it in, and not just because of Cody Rhodes’ post-WWE exploits. Cena had some epic RAW contests against Dean Ambrose, Neville, Cesaro and others, and many of them didn’t get included, but this forgettable contest did. Cena comes out on top to prove his superiority over the future AEW flag-bearer (okay, maybe that was a factor in this match being tossed onto the set). 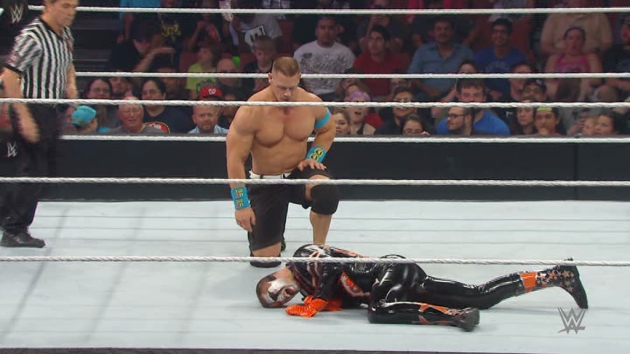 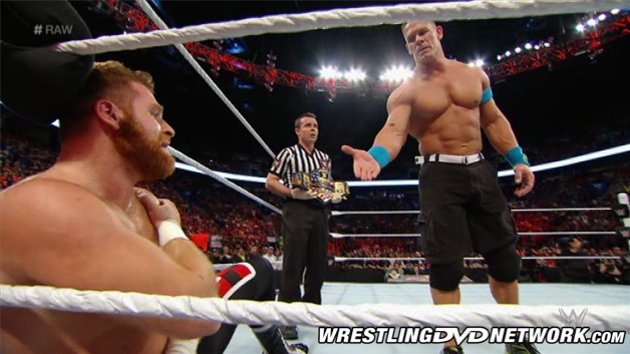 This match marked Sami Zayn’s main roster debut, though it would be a one-off due to a shoulder injury that Zayn suffered, during his entrance actually and then to greater effect during the early going of the bout. But it doesn’t stop Sami putting on a great performance in front of a hot-as-hell Montreal crowd. Cena retains the gold, but not before having one of the most memorable RAW matches of the year against Zayn.

Believe it or not, this was the fourth consecutive supercard clash between Cena and Rusev, which was at least one too many. At least their overly-long conflict ends with a decent I Quit showing here, but since Cena is renowned for never giving up, the chances of Rusev winning were microscopic. And so it was no surprise that Cena wins in a match which was the final step towards a Rusev/Lana split the next night on RAW.

This rounded off Cena’s star-making feud with Kevin Owens, who had made his main roster debut at Cena’s expense. It’s one hell of a contest, with so many near-falls and a raucous crowd to witness it live. Some complained about Cena submitting KO to win the match and their rivalry, but the saga still did a tremendous opponent to put Owens on the map. 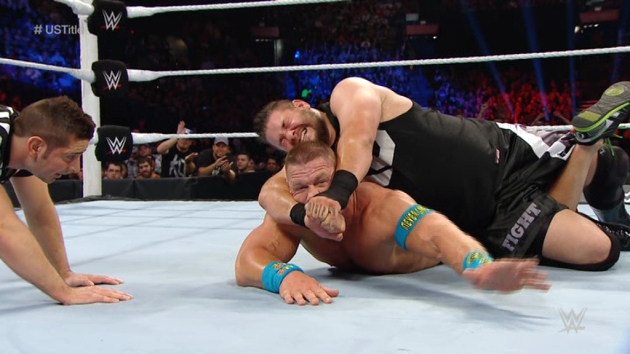 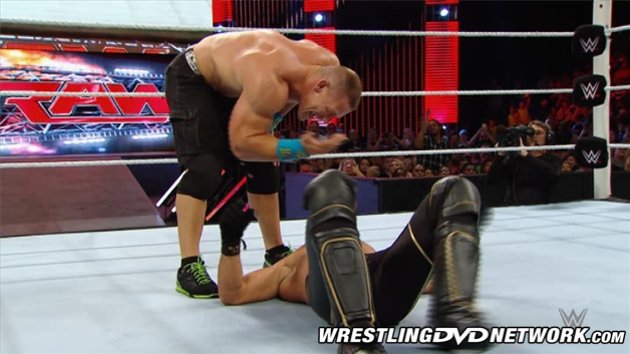 This was an infamous match due to Rollins breaking Cena’s nose inadvertently with a stiff knee, which led to him bleeding everywhere. But to quote JBL, Cena is “one tough son of a bitch”, as he continued on despite being in total agony, and he even picked up the win over the then-WWE Champion. It only marked the beginning of their rivalry that year, but this was arguably the most memorable match due to the bloody injury that Cena suffered.

From the day that the U.S. Open Challenge was announced, Dolph seemed like the ideal opponent for Cena, so this bout was inevitable. It’s pretty good, though not quite as memorable as other battles that John had during this period. Still, throw Dolph in the ring regardless of a storyline or the staleness of his character, and you’re usually guaranteed a strong outing.

Opening disc two is my favourite match from 2017. This is even better than their previous SummerSlam 2016 classic, and it marks Cena’s 16th heavyweight title win in WWE. The assumption at the time was that he would one day set a new record with title #17, but given his lack of recent in-ring activity, it looks like this won’t be the case. 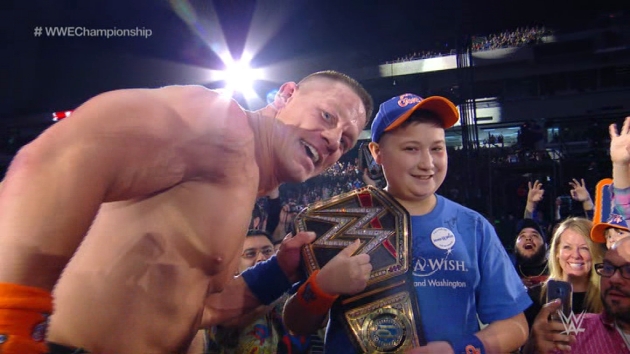 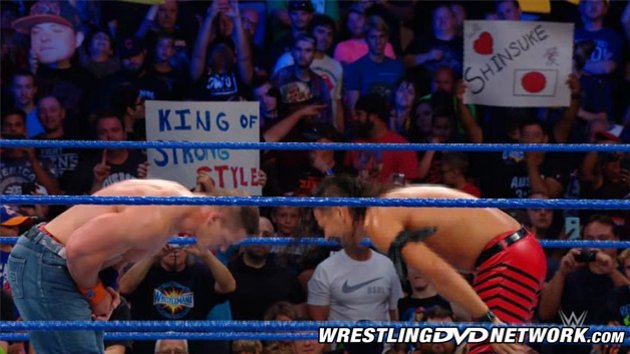 Cena vs. Nakamura is the dream match you never knew you wanted until Shinsuke showed up in WWE in early 2016. Their first-time battle would ultimately be their only televised singles collision, meaning that Shin holds a perfect record over Cena in one-on-one action. Not least due to a frightening back suplex which almost breaks Cena’s neck; thankfully, John was fine before tasting the match-winning Kinshasa.

I still believe this should have been saved for a WrestleMania, but due to Cena’s reduced ring schedule, perhaps WWE felt this was their only chance to book such a major match. It starts a little slow, but it accelerates and leads to a strong finish, with Cena putting over Reigns as The Guy, in what was a passing of the torch-style moment. 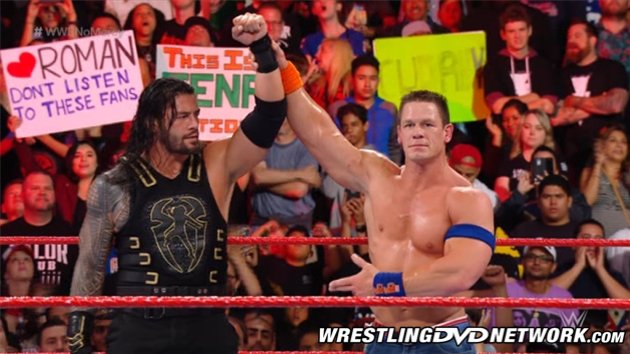 What better way to spend your Christmas night than with John Cena and Elias? That was the thinking in 2017, with Cena making an appearance at RAW in Chicago on 25th December, leading to a match and a relatively easy win over The Drifter. This is a fun spectacle, and the first step in what has turned out to be quite a long-running on-and-off spat.

Could Cena get to WrestleMania 34? The storyline of Big Match John potentially missing out on ‘Mania altogether began with this bout, which saw Cena put up quite the fight against Finn Bálor to earn his way into the Elimination Chamber match at the PPV of the same name. Cena giving a “Too Sweet” before planting Finn with an AA off the ropes made me chuckle. 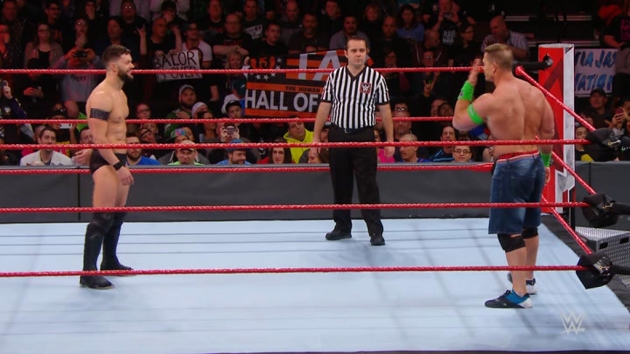 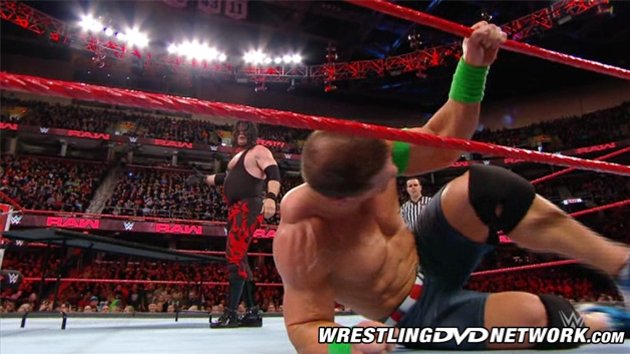 Cena would end up facing and losing to The Undertaker in short order at ‘Mania 34. Before he got there, though, he had quite the journey just to make the match happen, and that included this battle with Kane. It’s okay but nothing more, and many were expecting Taker to show up at the finish. Because he didn’t, it was a bit of a let-down, making it a bit of an odd inclusion for this DVD.

A few months before Triple H faced The Undertaker in their “last ever match” (which was followed by the two men opposing one another in a tag bout a few weeks later), we had what is likely to be the final clash between Cena and HHH. It’s a good match; it’s basic but effective, and Cena picks up the win to beat The Game on a major stage in singles action for the first time since WrestleMania 22. 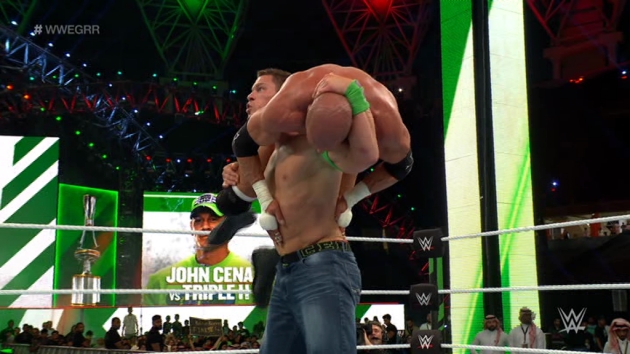 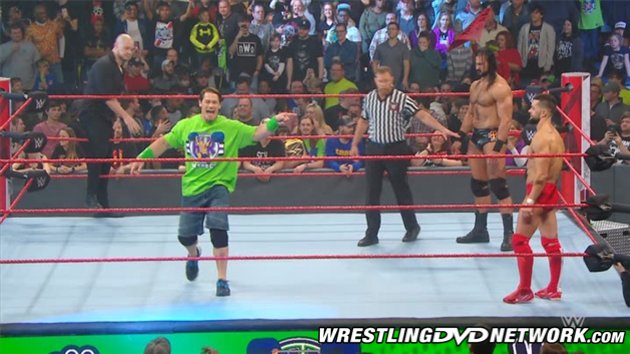 This is a random way to end the DVD, though it is an exciting four-way bout. This would be more suitable for a Finn Bálor DVD (and guess what, there’s one on the 2019 WWE DVD schedule). Mind you, it could go down as a footnote in WWE history: Cena hasn’t wrestled on-screen since then, and since he only participated in an angle at ‘Mania 35, it’s possible that this was his last RAW match. I expect him to wrestle again eventually, and to have some sort of big farewell match (perhaps at WrestleMania 36?), but as things stand, this bout could go down in history. 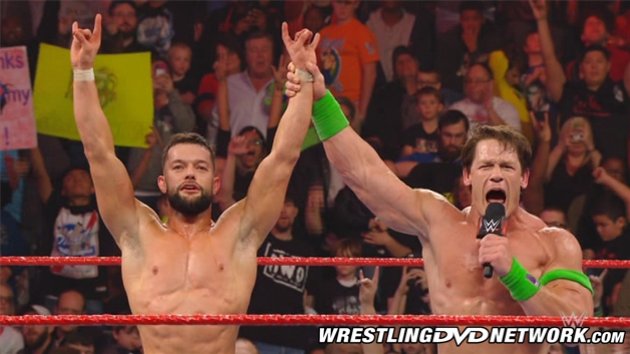 This is an enjoyable trek through the past few years, and presumably the final few years, of Cena’s career. It was an interesting period for John, as he went from The Face That Runs The Place to a part-timer, but in the process, he put on some of his greatest matches against a wide variety of opponents. Many of those bouts are here, though it’s not a complete round-up by any means (damn WWE not giving us a third disc!).

The majority of these are RAW contests, so if you’re hoping to catch Cena’s biggest showdowns, this is not the DVD for you to watch. If you’re just looking for some great in-ring action from Big Match John, though, then “John Cena: Hustle, Loyalty, Respect” should be quite a treat. 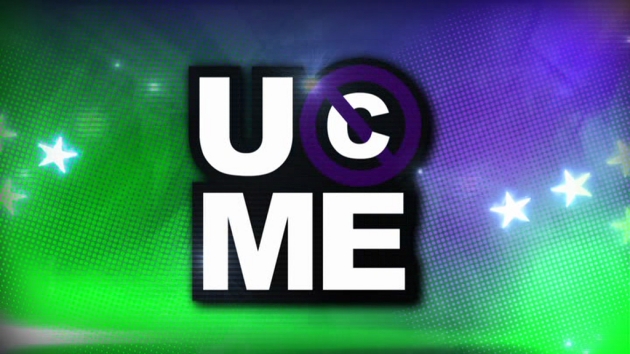