As much as we all love our DVDs and Blu-rays here, I think we’ve all enjoyed the WWE Network quite a bit as well.  Now that a couple months have passed by, we’ve gotten a nice look at some of the original programming the Network has to offer.  I’ve decided to do some mini-reviews for some of the more notable pieces of original programs released so far.

Please note that I have not seen EVERY piece of original programming the Network has to offer (there’s just too much good TV on right now in total to dedicate all my time to the Network).  These are just some brief thoughts on my impressions so far.

Part of me felt like Legends’ House was never going to see the light of day.  It was filmed quite a while ago as a potential piece of programming for the Network, and it ends up serving as a solid introduction to new programming for the Network (meaning it is not a clip show/documentary).  First of all, let me note that I am a pretty big fan of reality television in general.  Of course, there’s plenty of dreck, but I enjoy a good deal of the programming out there.  WWE made a great foray into this world recently with Total Divas, which has proven to be a very entertaining show (even if the situations are contrived).  Suddenly, Legends’ House actually had another show to live up to, and my biggest concern was that it would pale in comparison. 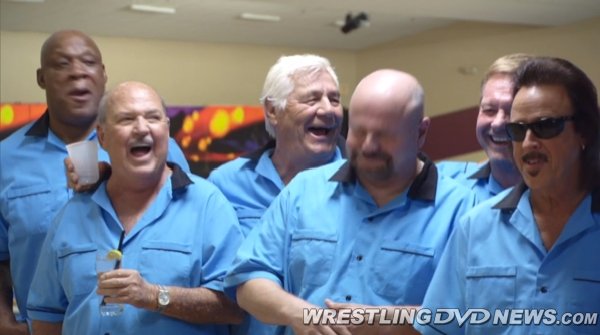 Fortunately, the show has proven to be fairly entertaining.  Yes, the “activities” the legends participate in are contrived, but I never get the feeling that this show is being scripted in any other way.  The casting was well done, and the big personalities help keep the show going.  The editing has also been very well done; storylines have been built into the show even if there isn’t too much action.  I also love the way the editors occasionally intersperse old wrestling footage into the show.  They know their audience, and this is a lot of fun for WWE fans.  If you don’t have any history with the men on the show, you may get bored, but most WWE Network subscribers are going to be somewhat familiar with the guys.

Unlike Total Divas, I don’t know that this would work on another TV network; I don’t think it has the same level of crossover appeal, and it definitely is not as “exciting”.   Legends’ House is designed to be a more laid back show to begin with, so the comparison may not be totally fair.  You can’t go in expecting the crazy storylines you get on Total Divas.  At this point, we’ve only seen 3 episodes, so hopefully the show doesn’t start to get repetitive and the activities can keep things fresh. For now, I’ve been entertained, even if this isn’t the reality TV goldmine WWE hit with Total Divas.

I’m gonna keep this review fairly short, because I don’t want to give away too much in case you haven’t seen this one yet.  In short, this a must-watch documentary (and gives good evidence to my claim that WWE documentaries don’t have to be 2+ hours to be good).

WWE cameras followed Warrior along during the weekend of WrestleMania XXX, as well as during his initial meetings at WWE HQ before returning for the Hall of Fame.  Interspersed throughout the recent footage are looks back at different moments throughout Warrior’s entire career.  A large number of personalities were interviewed for these segments, including Hulk Hogan and even the man called Sting, making his WWE documentary debut.  Fortunately, a lot of the interview pieces were new to those of us who have seen the recent Warrior DVD/Blu-Ray.  A lot of topics that I felt were given short shrift on that DVD (such as Warrior’s WWE departures) were given a bit more time here.  The controversy surrounding Self-Destruction of Ultimate Warrior was also discussed in nice detail. 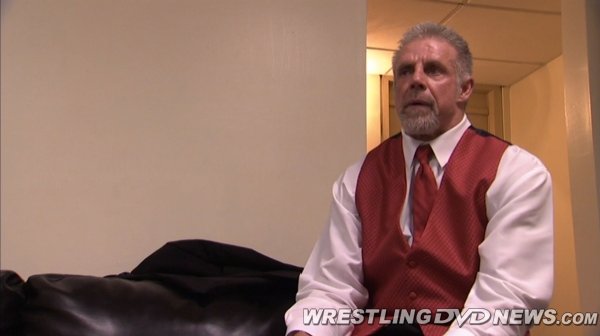 The real highlight of this doc, though, is the footage of Warrior during Mania weekend.  It was a very emotional weekend for Warrior, and we get to see all of the big moments.  From his interactions with his family, to those with members of the WWE family, everything is worth watching.  The absolute highlight is the gift Warrior gives to Vince McMahon before his induction.  It’s a very touching moment, and Vince clearly was moved by it.  This is probably the most emotional I’ve ever seen Vince McMahon in any sort of interview.  At the end, Warrior’s death is briefly discussed, and, not surprisingly, everyone is pretty emotional about it.  As a whole, this makes for a really worthwhile documentary.  It’s very impressive WWE was able to get this doc together so quickly, and for the quality to be as high as it is.  This may be better than any DVD that comes out in 2014.

While I wasn’t thrilled to hear that we were getting yet another release from WWE focusing on WrestleMania, I love the format of this show.  A short 20-30 minute documentary on the build-up to each match, followed by the complete match, is a great format, and allows the match to be watched in a proper context.  We’ve seen a lot of content in the past about WrestleMania matches, though, so I was a bit concerned that the show could be a bit repetitive.  As I expected, the quality of each episode really depends a lot on the match being focused on. 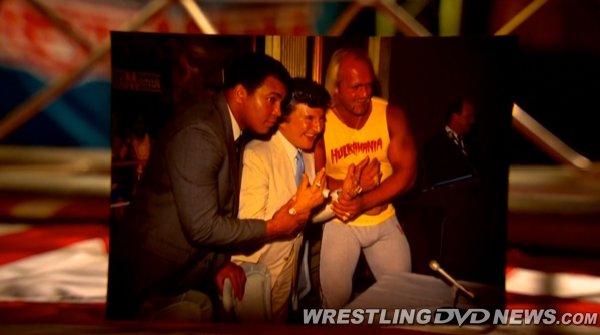 The show started off pretty well, with a great look back at the original Mania main event.  Surprisingly, we haven’t heard much about the build to this match in the past (everyone usually focuses on the creation of the show as a whole when talking about Mania 1), so there was a lot of new stuff in there.  It still remains one of the high points of the series.

Unfortunately, only two weeks later we saw what was probably the low point of the series: Austin vs. HBK from Mania XIV.  The large majority of the documentary in this episode focused on Austin’s rise and the formation of DX, topics that we’ve heard about way too many times, and don’t really have anything to do with the build-up of the match.  The match build-up is rushed through pretty quickly, and they never address the big topic in regards to this match: that it was a pretty big disappointment.  HBK talks about this a bit on the Mr. WrestleMania DVD, but it’s addressed even less here.  I think another reason this episode came off as so repetitive is that there weren’t any new interviews filmed, so the documentary had to be cobbled together from old footage.

Ever since this episode, I’ve watched WrestleMania Rewind a bit more sporadically.  In general, the most successful episodes tend to be focused on matches that have not been shoved down on throats in other documentaries.  For example, I found the recent episode focusing on Big Show vs. Floyd Mayfeather pretty successful; the match build-up was focused on, and we don’t hear about it too often.  Of course, the quality of the match itself will vary a lot as well.  The Bret Hart Mania X episode was never going to be bad because it features the greatest match in Mania history.  While the show is far from a must-watch, if they choose an interesting topic or a high-quality match, it can be an enjoyable hour.  Unfortunately, it has not lived up to the rave reviews we all heaped on it after the first episode, though.

Everyone loves countdowns, so it makes sense that WWE would make a countdown show for the Network.  Most of the interviews appear to be archival material (the length of Bryan’s beard is always a nice way to check this), so they didn’t even need to do much work in putting this show together.  Much like WrestleMania Rewind, this is a show that is very dependent on the subject of each episode, which was something I expected going in.  So far, we’ve seen a few very fun episodes, and a few that weren’t all that exciting. 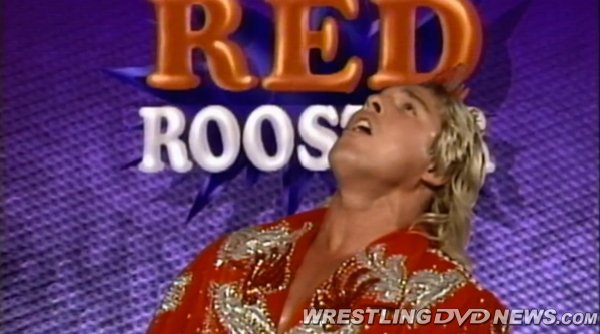 The first few episodes we were given felt like rehashes of things we’ve seen on old DVDs, with topics like the best catchphrases and finishing moves.  While these episodes weren’t bad per se, they were a bit boring.  The Top 10 Raw moments episode I didn’t even bother watching just because we’ve heard about this stuff so much.

Fortunately, there’s been some unique episodes so far as well.  The most enjoyable episodes have been on the topics that seem like they would be the most fun: most infamous gimmicks and biggest blunders.  Obviously, we haven’t seen too many past releases celebrating these silly/bad moments, and it’s entertaining watching the footage while current superstars give their thoughts on them.  The format for the show does work pretty well: a brief introduction to each episode followed by the 10 moments over the course of an hour.  It is odd that they have recaps of the countdown so far both at the halfway point and at the end of the episode (let’s be frank, most WWE Network watchers are using On Demand, not watching live), but other than this, the format works out well, and the quality just comes down to how much fun the topic is.

With any countdown, there is bound to be controversy over the rankings.  In a way, WWE avoided this controversy by having the fans rank the moments from a list of 10 chosen by WWE.  For the most part, WWE has done a nice job picking the 10 items that should be on each list (the only episode that you could make major arguments about is the Tag Teams list).  By having the fans vote on the ranking, they remove any culpability in regards to how the rankings pan out.  The bad part is that the modern moments tend to always rank higher than moments from the 80’s, just because they are most remembered by WWE fans.  The ranking is pretty irrelevant, though, because each item is given the same amount of time.  If you are getting mad over these rankings, you need to find something else to put your energy into! 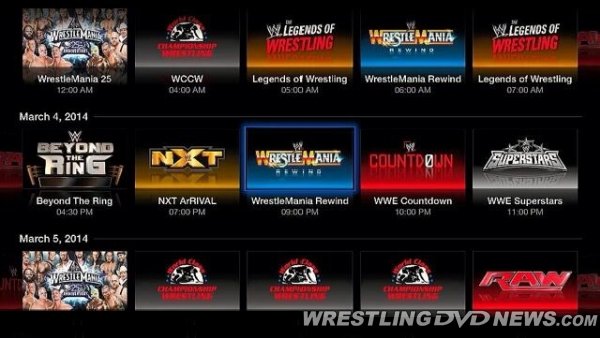 As you can see from my thoughts above, there haven’t been any total duds from the WWE Network yet.  Each show that has aired makes sense for the Network: they are designed with WWE fans in mind, and are not overly trying to cater to a mainstream audience.  I think this is the right direction to go in.  That all being said, there’s not much that has made me say “you must get the Network to see this!”.  The big exception there is Warrior: The Ultimate Legend, which you really should go out of your way to check out.

Legends’ House is a fun reality show, but it’s still a reality show, and if you hate reality TV, you’re going to hate this too (I hate to break it to you, but if you claim that you hate reality TV but like this show, then you do like reality TV).  Both WrestleMania Rewind and Countdown can be fun depending on the episode, but they are never much more than that.  As a whole, this is a pretty strong offering for WWE Network in its early stages.  The big selling point is still the PPV library and live events, but the original programming has made for a nice addition to the vault.  What has everyone else thought about these shows so far? Let us know in the comments!