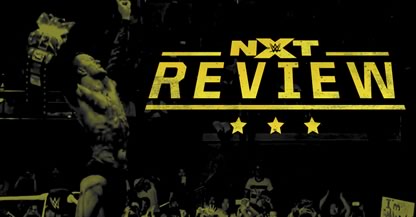 Hey, guys! Starting with NXT TakeOver: Brooklyn, (read the review HERE or watch the show HERE) I became your new resident NXT reviewer. As part of this great honour, I’ll be now reviewing the weekly show! Unexpected, right? I was also promised a key to the executive washroom, then Daniel disappeared to New York… Damn you, Bee! Okay, goofiness aside, let’s get on with reviewing this specially extended, 90-minute edition of NXT!

We start the show with an excellently (as usual) produced video of Saturday’s TakeOver special. It really did do an awesome job of putting forward the magnitude and importance of that show. Also, I hope that this means they’ll keep most of this extra time for in-ring action now.

Colin Cassady and Enzo Amore got a huge reaction on their way to the ring. While there’s still a legitimate point as far as them not being part of TakeOver, this kind of pop from a 15,000+ crowd pretty much makes up for it. 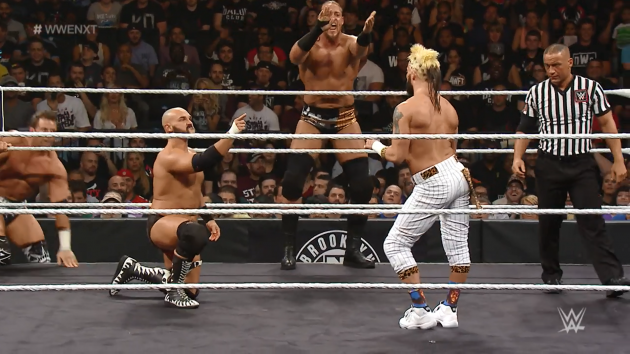 This was a fairly generic 8-man tag, if I’m being honest. With that said, the crowd were really behind Enzo and Cass (especially Enzo). The fans did die down considerably when the heel team took over though, which did concern me that the match would be taken down a notch or two. However, the excitement really came back in full force as all 8 men caused chaos down the homestretch. To the surprise of no-one Enzo & Cass got the victory for their team to make their “home town” crowd happy. This was nothing amazing, but with such a crowd reaction, it was definitely a fun, easy-to-watch opener.

We see NXT GM William Regal backstage, who reminds everyone that the “Dusty Rhodes Tag Team Classic” tournament will begin next week (September 2nd). Neville interrupts to ask to be part of the bracket. Of course, Regal agrees. Neville is a good choice as someone who can put on good matches, but also as someone who brings star power and legitimacy (as a former NXT champion) to the tournament.

We also get some brief stills of TakeOver: Brooklyn’s NXT Championship ladder match, narrated by Corey Graves. This is followed up by a brief post match interview with Finn Balor. A harmless short recap with some new content sprinkled in.

Lastly, we get some build for the NXT Divas fatal four-way later tonight.

Oh dear god. My first weekly show and I get to review this?! Look, I’m sure Eva Marie is trying very hard in her training. And as awkward as she looked, I’m sure that a more experienced Diva could bring something watchable out of her. Carmella is not that Diva. Carmella is still fairly rough herself, which made this whole thing painful to watch. The crowd even cooled on the “Princess of Staten Island” by the end of this, IN HER HOMETOWN! Triple H, you can tell me that NXT is not developmental, but matches like this prove otherwise. 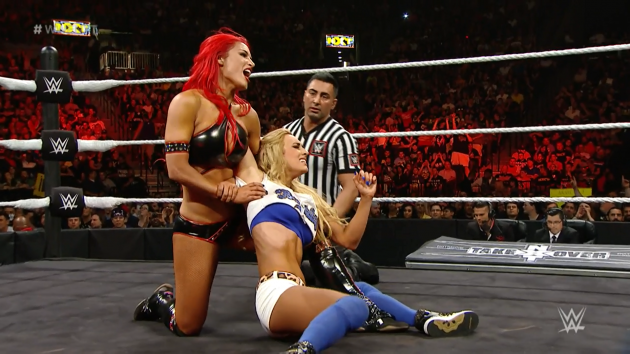 In news for next week, the “Dusty Rhodes Tag Team Classic” will begin with Baron Corbin & Rhyno vs. The Ascension.  That should be a solid brawl.

This was Dempsey’s “triumphant return” after his numerous training montages. It’s pretty clear that his character is going a bit more in the comedy direction. I think this may be for the best, as he was pretty much floundering in his “old school badass” role.

There really isn’t much to be said about this match, as it only lasted about 4 minutes. It was your trademark NXT “competitive squash” match. This is the first time I’ve seen Samson in his “drifter persona. Obviously this match wasn’t designed to showcase him, but what I saw was solid, if unspectacular. 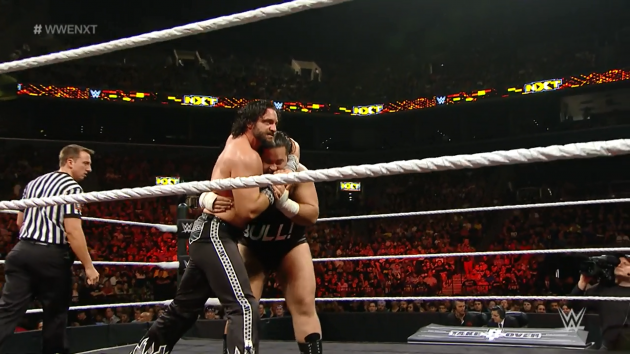 Dempsey had the crowd behind him here (especially with his slogan of “Bull! Fit!”), which makes sense due to him being from New York. All things considered, this should be classed as a successful re-debut of Bull’s tweaked character. This isn’t something that you need to go out of your way to see though.

We get another stills recap from TakeOver, this time focusing on Samoa Joe vs. Baron Corbin. In a post-match interview, Joe says that he’s putting NXT on notice. I’d expect an NXT Championship opportunity in his near future. And also probably a lot of twinkies…

Nia Jax is coming soon! If she gets to wear cybernetic arms, then I’m already sold.

I think you get the idea at this point, but we get yet more TakeOver recap and interview packages, this time focusing on the debut match of Apollo Crews and the NXT Tag Team Championship match.

More hype for the Divas fatal four-way tonight, as we get a reairing of a profile piece on Charlotte.

Emma vs. Dana Brooke vs. Becky Lynch vs. Charlotte

Like pretty much all of this show, this was good, but it felt like it was intentionally holding back a gear or two. It told a solid story though. The two PCB members just wanted to keep things between them in a sporting contest, whereas Emma and Dana were happy to work together for as long as it benefited them. Of course, the two heels ended up bickering and the whole thing ended up turning into chaos. Like I said, it was fun, but not on the level we often see, even on NXT’s weekly show. 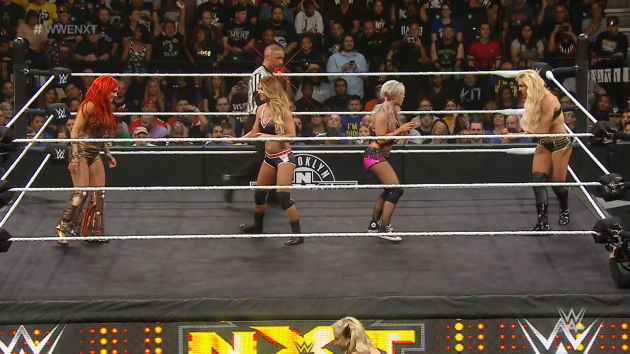 I should also point out that the ending came across as a bit flat. While the ending chaos was all going on, Emma managed to sneak in and steal the victory with an Emmamite Sandwich. The crowd wasn’t expecting it and pretty went dead until Becky and Charlotte fought back post-match. Of course, nothing is set in stone, but Emma looks likely to be Bayley’s first challenger.

Honestly, I really can’t recommend this show. The opener and main eventer were solid, fun affairs that may be worth your time. However, we also had a farly non-descript squash match plus a large amount of recap filler. This was the very definition of a “spinning the wheels” show.

Give the first and last match a chance for sure. The squash is harmless and served its purpose. Eva Marie/Carmella should be saved for only the truly masochistic wrestling fans. I will admit that the huge crowd really helped the 8-man tag and four-way feel bigger than they really were, however.

WWE Airing Full Slate Of Programming Prior To WWE NXT Takeover: In Your House Tomorrow