I love the Royal Rumble, but recent incarnations haven’t gone so well due to unpopular outcomes and questionable booking. With this in mind, it was also a worrying sign that WWE hadn’t done very much to promote the men’s Rumble match for 2018; we only knew less than half of the participants beforehand, with plenty of big names still yet to confirm their participation. I say “men’s” because, of course, this show would host the first ever women’s Royal Rumble match, which was bound to be a huge moment. But was there a chance of WWE watering down the concept of its famous gimmick bout by holding two full-scale Rumbles in the same night?

Happily, all of these fears were alleviated, because WWE came through with two highly entertaining Rumble matches, both with popular outcomes and featuring plenty of surprises. Add to that a very news-worthy debut and some enjoyable action on the under-card (albeit under circumstances where major title changes were somewhat unlikely), and you have the makings of a strong PPV event.

With Royal Rumble 2018 now available on DVD and Blu-ray, let’s take another look! 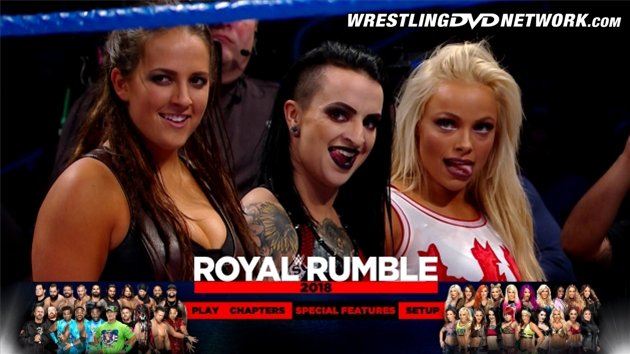 The Handicap match is a lot of fun. The assumption was that AJ’s limited odds of winning would be based on interference from Shane McMahon, but that doesn’t happen. Instead, Styles pins Owens with a roll-up, which KO and Sami still argued about considering Owens wasn’t the legal man. It helps to further the “conspiracy” storyline against Shane whilst making AJ look strong, and after a damn good match to boot. 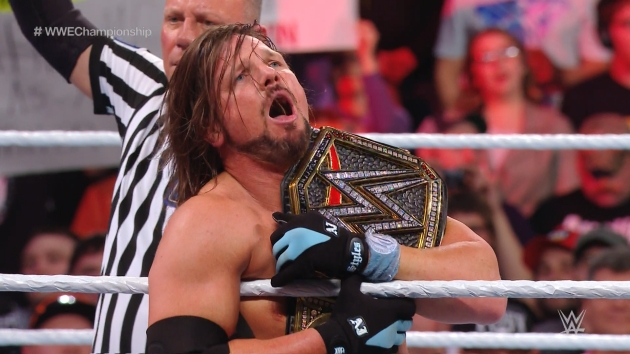 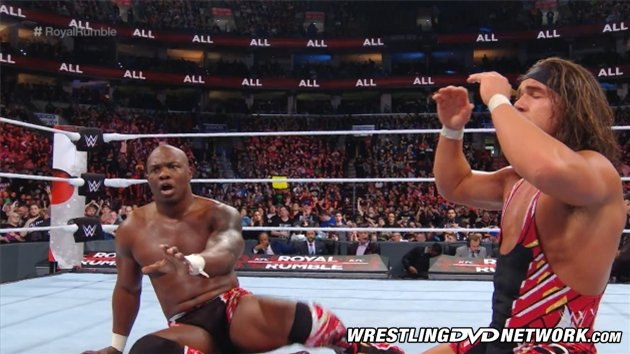 This is a well-worked affair and has some strong moments, but I didn’t see the need for it to be Two out of Three Falls, especially considering that The Usos clinch the victory in two straight falls. A more traditional tag match, which could have packed in most if not all of the same spots, would surely have been the more sensible option. 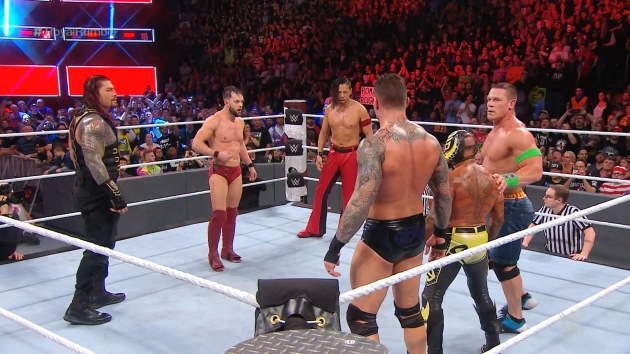 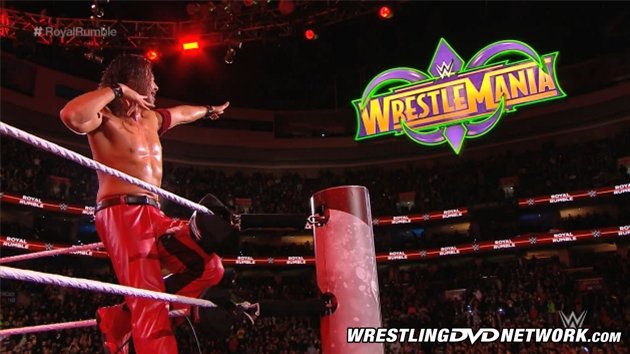 This is a hugely enjoyable hour of WWE television. There are fun spots littered throughout the bout, from unexpected eliminations to surprise returns (of which there weren’t any in 2017, at least from outside the usual WWE circle), and the outcome of Shinsuke Nakamura unexpectedly triumphing by tossing out Roman Reigns ensured that it ended on a high note. I feel like the match will lose some of its entertainment value over time, since part of the enjoyment factor comes from the low expectations created by the lacklustre build-up, but judged in a vacuum, this is one of the best Rumble bouts in years! 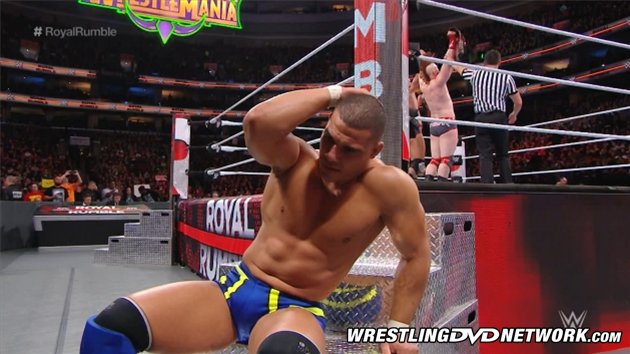 It’s strange to see a match take place after the Rumble bout, which involves wrestlers who had just been IN the Rumble. This is a very forgettable clash, with Jason Jordan unable to properly participate due to injury. On the night, it felt like the set-up for a future Rollins vs. Jordan match at WrestleMania 34, but with his injuries more severe than expected, it unfortunately put Kurt Angle’s “son” on the shelf indefinitely, causing him to miss the upcoming Mania card altogether. 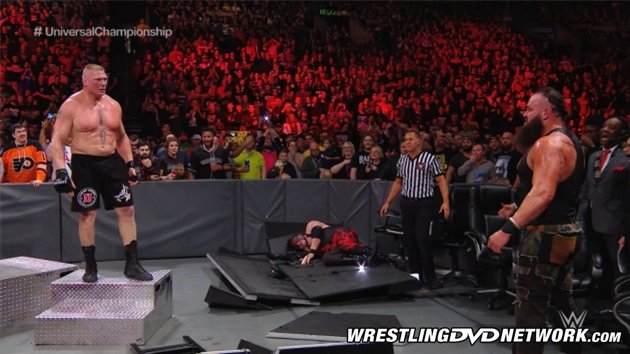 Had this taken place a few months earlier, Brock Lesnar’s title reign might have been in jeopardy. Coming so close to WrestleMania, though, the odds of Lesnar losing the title were almost non-existent, even to the red-hot Strowman (they really were non-existent when it came to a possible Kane title victory, given his age and his ongoing campaign to become Mayor of Knox County). Sure enough, Brock comes out on top in a match that is enjoyable enough, but has virtually no drama because so few people anticipated a title change. 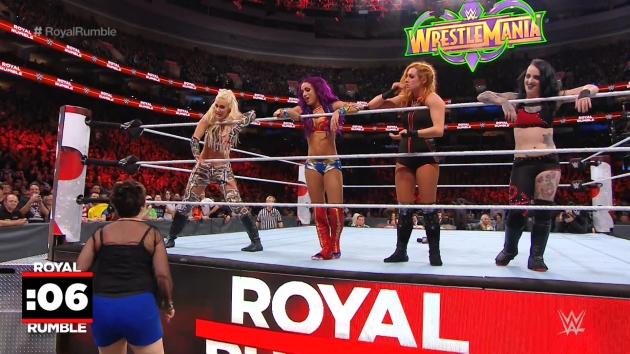 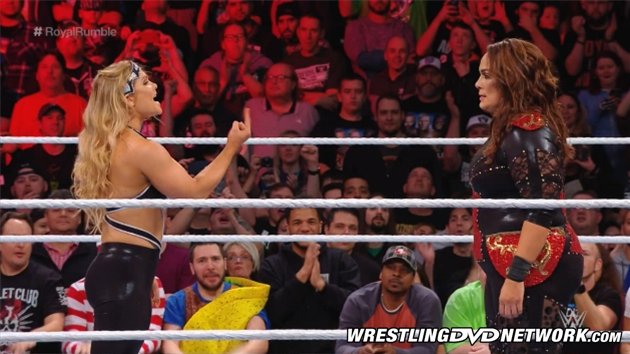 The show ends with the first ever women’s Rumble match, and as with the men’s match, this is a lot of fun. There are a lot of surprise returns to pad out the 30-woman line-up, and in some ways it felt like an hour-long retrospective of the history of WWE’s women’s roster, with everyone from Trish Stratus to Kelly Kelly to Vickie Guerrero making an appearance. Asuka seemed like the logical winner beforehand, given her undefeated streak in WWE, and that’s how it turned out with the Empress of Tomorrow earning a title opportunity against the champion of her choice for WrestleMania.

But that’s not the big story of the night. That comes moments later with the unannounced (though heavily-rumored) appearance of Ronda Rousey, who had just officially signed a WWE contract. It ends the card on a high note, and though in hindsight Ronda’s upcoming WWE debut match at WrestleMania 34 has no storyline connection with Asuka (or Charlotte Flair and Alexa Bliss, who were also in the ring at the time), this moment (in particular Asuka batting Rousey away) may be used to promote a future Asuka vs. Ronda mega-match. Could this be the match where Asuka’s undefeated streak finally ends, possibly at WrestleMania 35 (which may even be the first all-women’s main event match in WrestleMania history?). 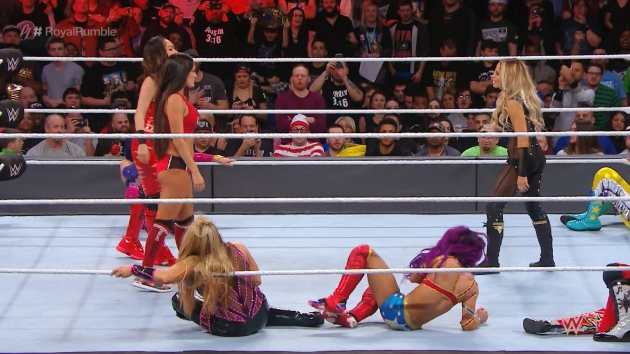 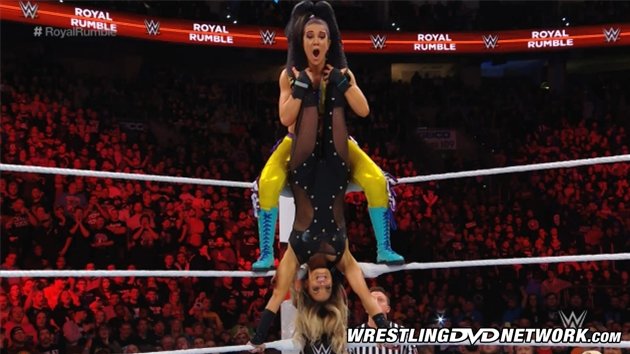 Unfortunately, none of the three Kickoff Show matches that are included as extras on the Home Video release are really worth watching. The cruiserweight six-man tag (Kalisto, Gran Metalik & Lince Dorado vs. TJP, Jack Gallagher & Drew Gulak) is well-worked but no different to any other cruiserweight tag that WWE tends to book; The Revival vs. Luke Gallows & Karl Anderson feels like filler; and Bobby Roode’s United States Championship defence against Mojo Rawley is another bout where the outcome is too predictable for the action to really have any substance.

It’s always nice to have the Kickoff Show bouts included on the DVD, but in this case, I wouldn’t recommend going out of your way to see them. 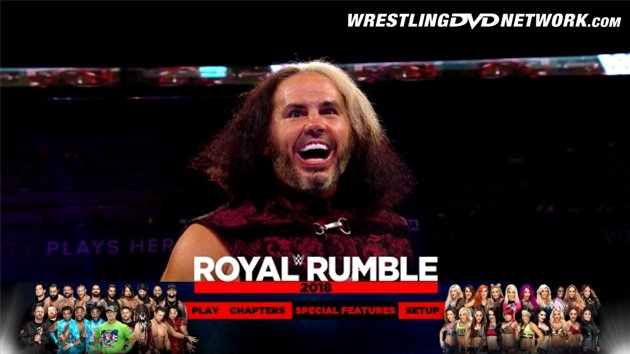 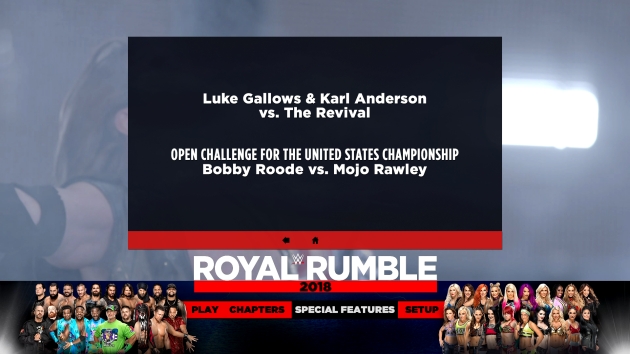 Royal Rumble 2018 is propped up by the two Rumble bouts and the WWE Championship Handicap match, and since they take up more than half of the running time, this ensures that the card as a whole was a success. Considering the huge negative reactions towards the outcomes of recent Rumbles, the almost-unanimous positivity coming out of the 2018 Rumble, whether it be for Shinsuke Nakamura’s Rumble win, Asuka’s history-making triumph or Ronda Rousey’s headline-grabbing debut (as a contracted performer; her WrestleMania 31 cameo happened while she was still fighting for UFC), makes this one of WWE’s best shows of 2018, even at this early stage of the year.

Hopefully, WrestleMania 34 will build on the achievements of the Rumble to deliver another night to remember (Nakamura and Asuka will surely win their respective titles in the Mercedes-Benz Superdome on April 8), but as you count down the final few days to Mania, it is definitely worth reliving one of the more entertaining and exciting Royal Rumbles of the last decade on DVD/Blu-ray. 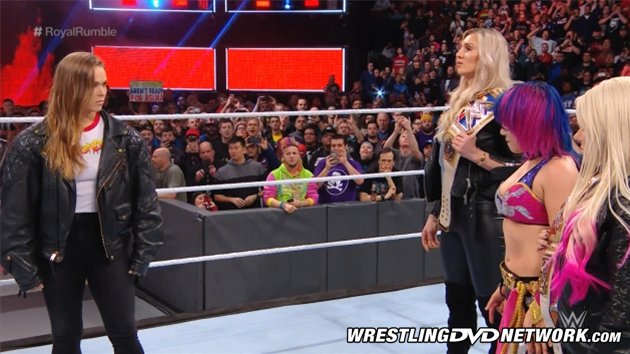