REVIEW: WWE The Rock vs. John Cena “Once in a Lifetime” DVD 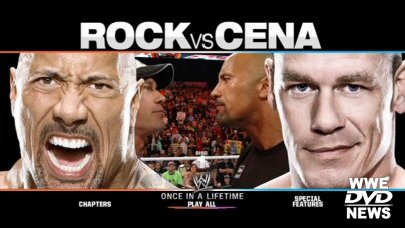 My interest in the WWE really started to wane in 2006, and although I still followed the product, I can’t say I was watching RAW week in and week out.  Around 2010-2011, though, I think the WWE really picked up steam, and has been operating at a high level again.  One of the chief reasons for this was the feud between John Cena and The Rock.  While it’s not anywhere near perfect, the interactions between the two men were usually pretty entertaining, and I was eagerly anticipating their match-up at WrestleMania.

All this being said, I had mixed feeling when this DVD was released.  I wasn’t sure if watching the entire feud in one go would make its flaws more apparent.  Fortunately, this didn’t really happen. If anything, it helped because we didn’t have the huge gaps in the year when The Rock wasn’t on the show.  I also was unsure how they would make this documentary.  Again, fortunately, the documentary is outstanding.  Disc 1 runs about 1 hour, and Discs 2 and 3 each run around 2 hours, 50 minutes.  The DVD is rated TV-PG.

“Hey, I Heard You Were a Wild One”: The Main Feature 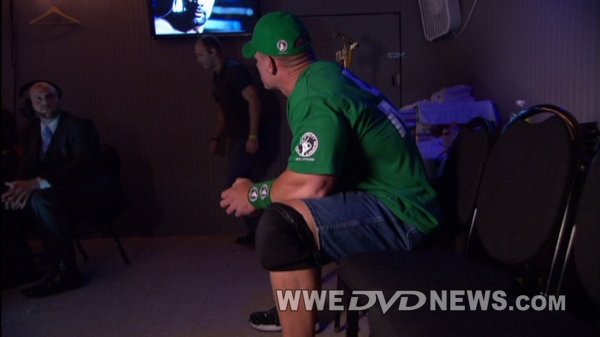 I did not get a chance to check out the Once in a Lifetime documentary that aired on USA back in March, so I cannot compare the documentary on this DVD to that one, but I understand that they are different.  This documentary is very different from that of other WWE documentaries, and that ends up being a very good thing. 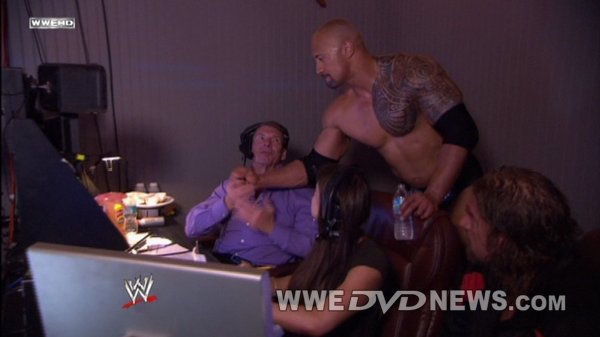 In addition to being a wrestling fan I also am a pretty big film buff, and one of my favorite genres is the documentary.  While I have always been a huge fan of WWE’s documentaries, they aren’t very structurally complex.  Usually, when telling the story of a wrestler, company, etc, there is a very traditional “rise and fall” arc to the story.  Of course, there are bumps along the way, but the documentaries are always told in a straightforward way.  What makes those documentaries great is how fascinating they are.  This documentary, though, is structurally complex, adding a new level to the feature.  Because of this, I don’t think it is hyperbole to say that from a film standpoint, this is the best documentary the WWE has ever made.  And it’s pretty damn close to being the best they’ve ever made period. 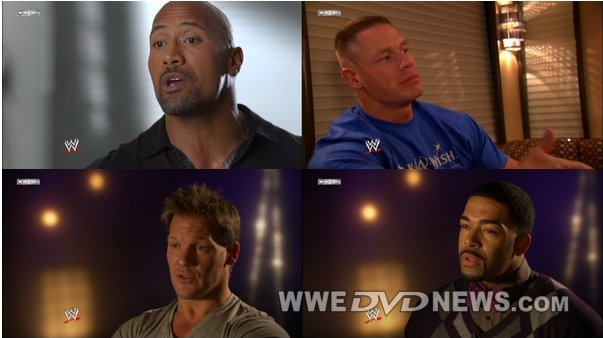 For the most part, the documentary focuses on the time from The Rock’s return in February 2011 up until the night of Wrestlemania XXVIII.  While they bring in a few details about each man’s past, the overall thrust of the narrative is from during this time period.  The documentary does a very good job blurring the line between story and reality.  While some of the comments from Cena or The Rock are clearly the two of them speaking “in storyline” about each other, most of the comments feel honest outside of their characters as well.  The comments from other wrestlers also feel pretty honest, particularly CM Punk (as WWEDVDNews reported earlier this week).  You also get what I feel like is unprecedented backstage access. I don’t ever remember seeing footage of a wrestler talking to Vince and Stephanie at the production desk.  The number of wrestlers interviewed for the DVD is kept pretty small, and I actually enjoyed that aspect.  Almost everyone interviewed is a major name.  While David Otunga may feel out of place as a talking head, he is a very articulate person, so I liked having the opinions of a current “midcard guy” who can speak for himself pretty well.

One of the bigger potential criticisms for this documentary is its short run time (43 minutes).  I actually thought that the run time was perfect, and, in fact, there were some sections that probably could have been shorter.  As fans of WWE documentaries, we have been trained to expect the 90 minute documentary, but this documentary doesn’t fit that format at all.  Since the focus is on one storyline that only went a year (of which the entire footage only lasts about 6 hours), it felt right for them to move this quickly, only hitting on the different aspects of the feud in broad strokes.  As I mentioned, there is a brief discussion of each man’s past, but they keep the discussion in relationship to this feud.  The documentary also ended with Wrestlemania XXVIII, which was the perfect endpoint.  I liked that they didn’t drag in any other outside information or post-match fallout; it would have dragged down the great pacing this feature has.  Again, from a film standpoint, the construction is fantastic. 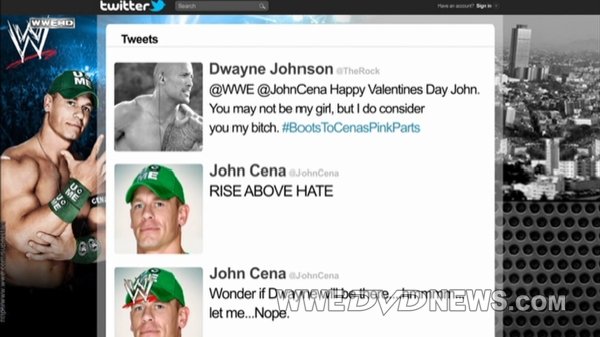 Although I have basically been gushing about this feature, it isn’t perfect.  There is a section on this documentary discussing the “social media” aspect of the feud, and I felt that this part went on for way too long.  This was the only time on the feature where I felt the pacing wasn’t perfect.  Also, in addition to addressing an interview Cena did on a radio show discussing The Rock, I wish there would have been a brief inclusion of their interaction at the Hall of Fame ceremony in which The Rock inducted Rocky Johnson & Peter Maivia.  It was the only piece missing.

The bonus features vary in how interesting I found them to be, but as a whole, I would say that they were pretty unnecessary. While everything in the documentary is centered around the feud between Rock & Cena, the bonus features really deal with each superstar individually.  The most interesting one is called “Tickets”; I don’t want to spoil the story, but it does deal with both The Rock & Cena (as well as John’s brother Matt). 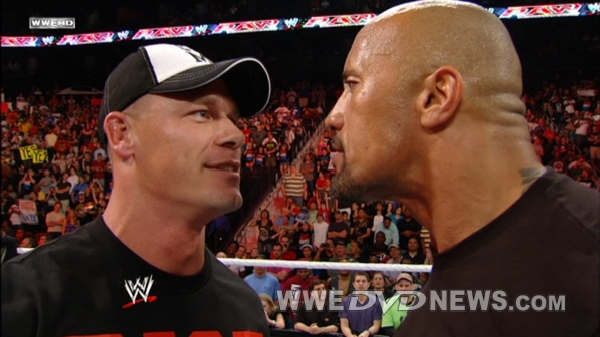 On Discs 2 and 3, we see every segment dealing with The Rock Vs. Cena feud, from The Rock’s return to WrestleMania XXVIII.  I love the idea of a DVD recapping a feud like this.  Showing how an entire feud builds over time is awesome to see, and we haven’t had a DVD yet that has outlined a feud like this.  By watching each segment in a row, it actually strengthened the feud from how it played out over real time.  Although there isn’t any stand-out segment, they do play into the larger picture pretty well.  I was able to get through each segment surprisingly quickly, which I think is the best compliment I can give to the segments.

That being said, there are a couple of segments that I didn’t enjoy.  The Rock’s “welcome address” at WrestleMania XXVII was probably fun for the live crowd, but it doesn’t work at all on video.  It’s unoriginal, and it doesn’t feel like something The Rock would come up with on his own.  The John Cena “This is Your Life” segment with Mick Foley is downright painful to get through.  I believe after this segment aired, Foley claimed on Twitter that his goal was to be part of “one of the worst segments in Raw history”, and he achieved that here.  I would highly recommend skipping through this segment.  Unfortunately, there isn’t a truly incredible promo in this feud, but all the other segments range from good to great.

“Never Before”: The Matches

This match is actually joined in progress starting at the double count-out.  I thought this was a great choice, and helps keep the flow of the DVD strong.

There were parts of this match that were a lot of fun, but the middle of the match really dragged.  I understand the decision to not have The Rock in the ring too much to “save it” for WrestleMania, but that really hurt the flow of the match. 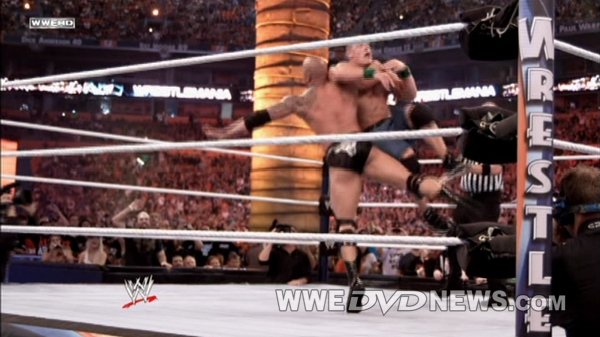 This match ended up delivering as well as I expected.  The atmosphere in the arena helped push the match over the edge as well.  The Rock proved he could still go in the ring, and Cena was a great opponent.

I think a lot of fans put this DVD in the “skip” column when it was announced, but in the end, that may not be the best choice.  Even if you did not particularly enjoy the feud, I still think the DVD is worth the price of admission for the documentary alone.  The closest thing that I am able to compare this documentary to is the documentaries featured in the ESPN series 30 For 30.  It tells a specific story in an interesting way, much like a lot of the ESPN docs did.  It definitely helped boost my appreciation for this feud, and I think it will do the same for almost anyone else who watches it. 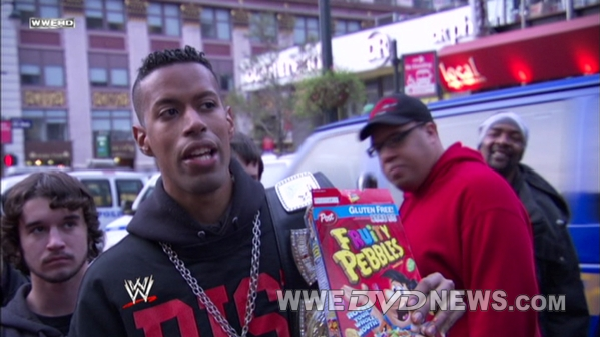 I know there are some people out there who did not like this feud at all, and if you really hated it, then you may not find much to like about Discs 2 and 3.  Regardless of what you thought about the feud, though, I think you have to appreciate the concept behind this DVD.  Including every match and moment in building up this feud was very cool to see.  While I loved the main feature of last year’s Greatest Rivalries: Hart Vs. Michaels, I didn’t think the bonus content was well constructed.  This is a much better method for outlining the feud.  I know that the Greatest Rivalries series seems to be dead, but if they were to ever bring it back, I would prefer the DVD’s follow the Rock Vs. Cena format for the bonus content.

Of course, there isn’t really much for me to say about the bonus matches because they are pretty few and far between.  The WrestleMania match is fantastic, and for Blu-Ray collectors, I think the “Director’s Cut” of the match will be a pretty neat extra.  The other match isn’t great, but it proved to be a good piece for the feud. 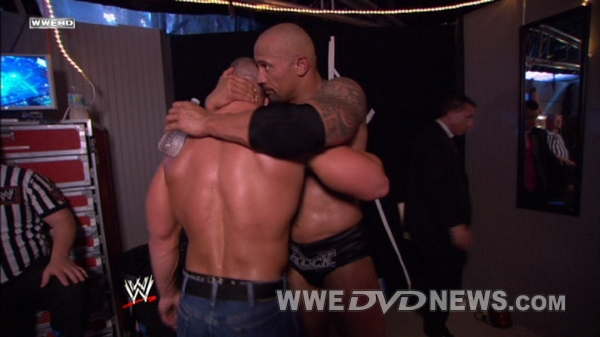 I’m curious to see the reaction to this, but I do feel that the documentary featured on the first disc of this DVD is probably in the Top 3 documentaries the WWE has ever released.  It is far and away the most ambitious piece of filmmaking the WWE has ever put out there, and deserves to be commended for this alone.  The fact that they were able to pull it off and show that they can be great filmmakers really excites me for documentaries from WWE in the future.  The documentary gets my highest recommendation, and overall I would give the set a surprising thumbs up.