While they usually look entertaining on paper, the past countdown DVDs from WWE have ranged from average to disappointing.  Because of this, I don’t think expectations were all that high for the Top 25 Rivalries in Wrestling History.  The match listing, on paper, didn’t seem particularly exciting either.  Of course, there are always going to be concerns that the countdown will be ranked ridiculously (as Top 50 Superstars of All Time was).  I think this particular list will get the least number of complaints, though.  A nice balance is given to different federations throughout wrestling history, and while there are always going to be a few choices to quibble with, overall it’s not too bad. 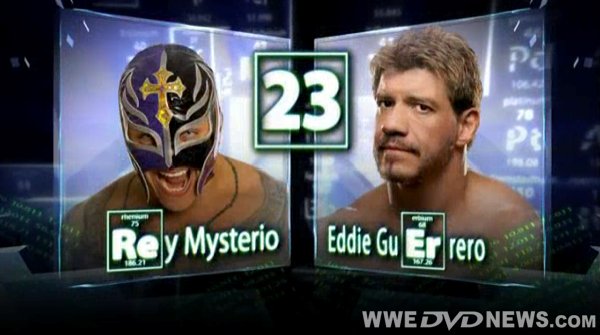 As I alluded to earlier, the countdown, without question, is the best one the WWE has released yet.  There are a number of reasons for this, but one of the basic ones is the choice to do a Top 25 instead of a Top 50 (or Top 100) as has been done in the past.  This allows for about 7 minutes focusing on each of the rivalries on the countdown.  While this may not sound like too much time, it actually worked out pretty well.  I felt like we were able to get a good sense of the overall feud, while still focusing on some individual matches and moments at the same time.  Not surprisingly, the WWE did a great job choosing which footage to include here.  The 25 rivalries chosen were pretty nicely balanced as well.  You get rivalries from all different eras, and from different promotions.  The countdown is never going to be perfect for everyone, but on the whole, it’s hard to complain too much.  Sting/Hogan and RnR Express/Midnight Express were probably the only really questionable omissions, but at the same time, it’s hard to make a strong argument to remove any of the rivalries that were included. 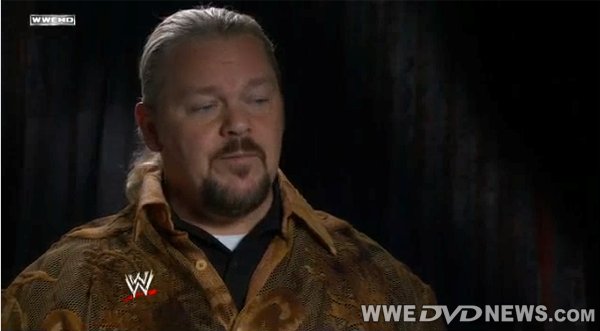 Another great choice the WWE made for this countdown was to only interview one superstar to discuss each rivalry.  This allows the superstar to really go in depth on the rivalry, rather than just cutting to a bunch of guys making pretty superficial remarks.  They also made sure to never choose one of the two men involved in the feud.  This allows for a nice outside perspective.  The choices the WWE made were, across the board, quite inspired, from Vince Russo discussing Austin/McMahon to CM Punk breaking down Hogan/Savage.  They even sought out NWA referee Tommy Young to discuss the Flair/Steamboat rivalry.  My favorite was probably hearing Bret Hart talk about the Angle/Lesnar feud.  The only choice that I can see getting any complaints is the Miz discussing Rock/Austin, but this has more to do with the “internet community” being conditioned to hate everything about the Miz than anything else.  He does offer some nice insights. 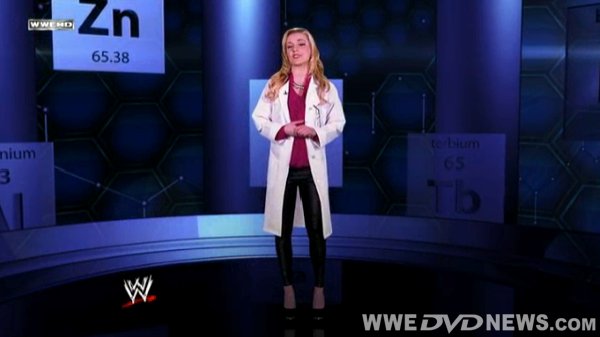 The only part of the feature I didn’t particularly care for were the interspersed host segments with Renee Young.  Young was fine, but she isn’t exactly given much to do.  The WWE decided to go with a chemistry theme for the overall set.  This sounds fine at first, but they end up going totally overboard.  And this is coming from someone who actually enjoyed college chemistry!  The comparisons made between the rivalries and different elements are silly, and they don’t add anything to the set.  After about the second segment, I found myself skipping through these entirely.  I think this is the first time I’ve skipped through the host segments on any countdown or match compilation set, which I think says something about the quality here.  But if you skip through these, you’ve got a really entertaining feature overall.

This match actually has the feel of MTV, the network it aired for.  The action is pretty constant, and it quickly degrades into a serious of interferences and celebrity cameos.  Not the blow-off to a feud that Hogan and Piper should have received.

Watching this match, you can truly feel the hatred between these two men.  The close-up image of Tully trying to drive the wooden spike into Magnum’s head is one of the great images from wrestling history.  An historic brawl that must be seen. 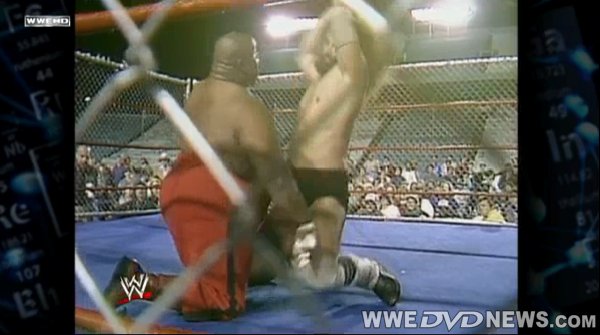 This is one of those matches that wasn’t really designed for “star ratings”.  Fun while it lasts, but it doesn’t really come together as a match.

I was very surprised by this match.  The street fight style gimmick was used really well, and I was interested in the story throughout the whole match.  The ending is disappointing, though.

Another match I was surprised by.  This match is paced very well to play to the strengths of everyone in the match, and it had the feel of a main event match even if the title wasn’t at stake.

This match played to the strengths of each man very well.  Mankind was pretty new to the company at this point, and they do a great job making him look like a big deal.  A nice “stepping stone” in the feud. 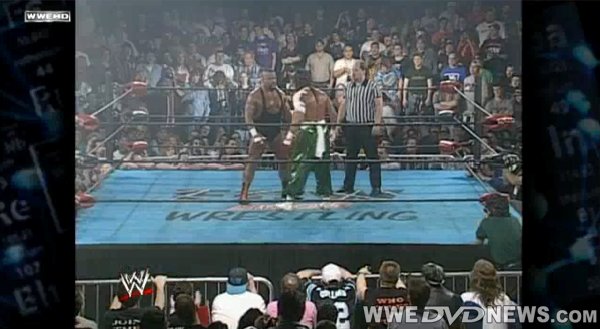 Knowing that this match was built up for a year leading to ECW’s first PPV, Barely Legal, you can really feel the “big match” atmosphere. The storytelling in this match is superb. It epitomizes what ECW was best at: combining great wrestling with the hardcore action they became famous for.  The match is given plenty of time to grow, and the finish works nicely.

I’m not a huge fan of this style of match, but Dreamer & Raven are probably two of the best at having crazy brawls.  This match gets really good at the end, though.  As the conclusion to a feud, I didn’t have a problem with all of the run-ins, and the near falls are done really well.  Even if there is a lot of “kicking out of finishers” and ref bumps, they work really well here, and even knowing the ending, I was on the edge of my seat. 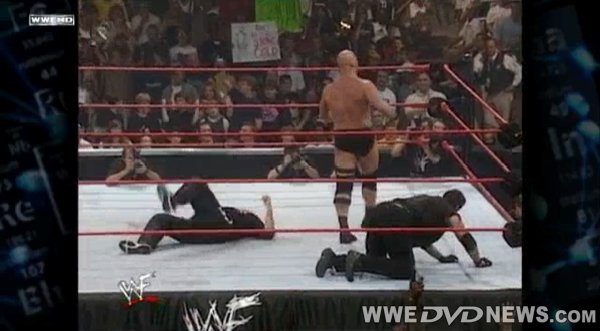 This match is way more fun than it has any right to be.  Say what you want about Vince and Shane as in-ring competitors, they are really good at taking an ass-whooping.  While not a technical masterpiece, I was really entertained with this match, and the crowd was really into it, which also helped.

This match was a disappointment for me.  The first 2/3 of the match were very by the numbers, and it never really has a chance to switch to another gear because of all the run-ins.  Watching this live, I’m sure the constant run-ins were entertaining, but looking back on the match, it feels a bit overbooked (something the Raven/Dreamer match I talked about earlier was able to avoid).

I appreciate that Rock & Austin tried to do something different with this match.  It didn’t feel like their earlier WrestleMania matches, especially due to Austin working as a heel.  It doesn’t quite reach the level of those previous matches, and ultimately serves as a nice lead in to that year’s Survivor Series. 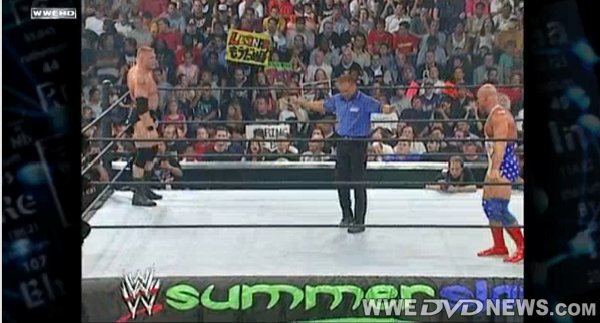 Angle & Lesnar pretty much always put on great matches, and this one is no exception.  It is very different from their WrestleMania match, and features much more psychology than I was expecting.

I’ve always been a fan of the Cena/Edge feud, but this isn’t one of their more memorable matches.  I’d call this an above average TV match, but nothing more than that. 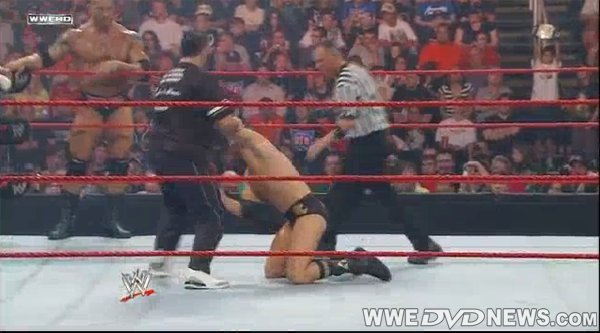 I found this match to be painfully boring.  While there isn’t really anything technically wrong with it, it didn’t hold my attention at all.  I also didn’t like how bad the match makes Rhodes & DiBiase look in the first 10 minutes or so.  They get buried by the other three men. 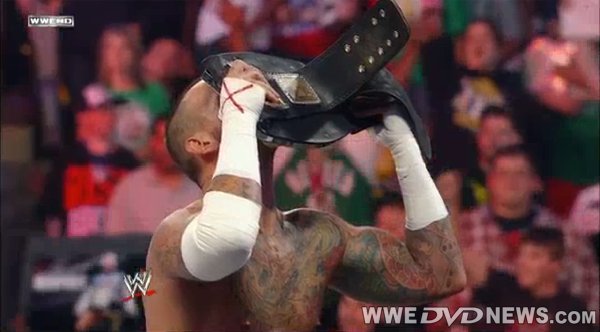 Punk & Cena have amazing chemistry, and this match is no different.  Fantastic storytelling that leads to a satisfying way to have a non-finish in the match.  Punk’s reaction to finding out he was still champ is wonderful.

I go into most new WWE Blu-rays with pretty high expectations, and they usually meet those levels.  This is one of those sets that did exceed my expectations.  The countdown feature is far better than it really has any right to be.  By using one superstar to talk about each rivalry, we really are able to get a good sense of WHY each rivalry was important.  Don’t come in looking for a timeline quickly running through each feud.  You aren’t going to get that, and, quite frankly, that would have been pretty boring.  I did learn a bit about some of the feuds with which I was less familiar, such as the Magnum/Tully and Freebirds/Von Erichs feuds.  But overall, you do get a great sense of what made each of the rivalries important.  It almost becomes a fun game trying to figure out who is going to talk about each rivalry.  Some of them are surprising, but when you think about it, each of them do make sense. 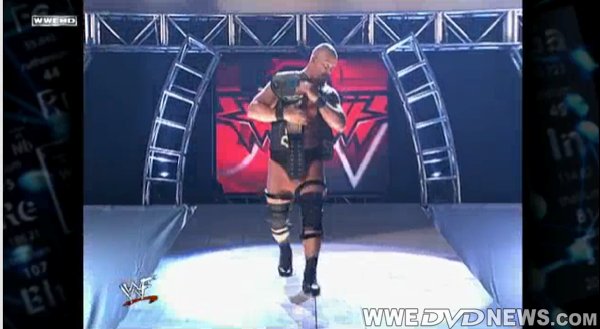 The match listing and bonus content for this set didn’t exactly light the world on fire when it was announced, but I will say that the match listing was fairly solid.  There aren’t any particularly BAD matches here, even if at the same time, there aren’t many total classics either.  I appreciated that they gave us a lot of Pay-Per-View and big event matches here rather than TV matches.  Most of the matches were given a lot of time, and are able to give you a nice sense of the rivalry.  I can understand why, due to time constraints, not each rivalry was represented in a match, but it did seem fairly random which were represented and which were not represented.  I know there will be a number of complaints about the amount of “repeats” on this set, and I do have a problem with the fact that some of the matches were included on compilation sets as recently as 1-2 years ago.  I feel like there should be a statute of limitations with this issue.  For example, the Magnum/Tully cage match hasn’t been put on a DVD in about 5 years.  I feel like enough time has gone by now to warrant its inclusion.  The Austin Vs. McMahons ladder match? That was on a DVD only 18 months ago.  That’s a little too soon.  If you are a match collector in particular, I wouldn’t say this is a set you need to rush out and get immediately, but if you do watch the bonus matches, there is a lot here to like. 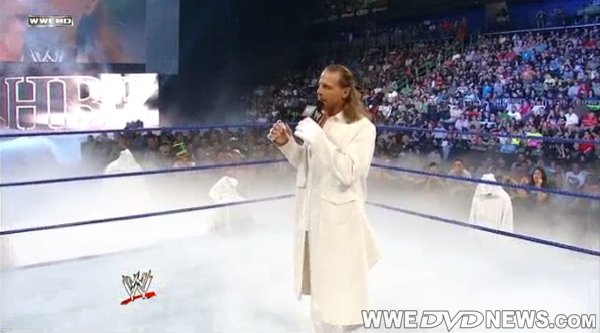 I also would say that this is not a set that I feel you need to own on Blu-ray.  The Blu-ray bonus features are pretty disappointing.  I’m glad we got at least one promo included, and it is a good promo, but not worth going out of your way to pick up.  The Cena/Punk match is fantastic, but I’m sure many fans already have it on the Best PPV Matches of 2012 Blu-ray.  And I was not a big fan of the six man tag team match.  If you are a die-hard collector, I’m sure you’re planning on getting the Blu-ray anyway, but if not, I would say this is an instance where you aren’t missing much sticking with the DVD.

While I would recommend this set, it’s not one that you need to rush out and pick up immediately.  If you like countdowns, you won’t be disappointed by the countdown.  The matches on here aren’t bad per se, but they aren’t particularly fantastic either.  I would call this a slightly above average overall release with a great main feature, and certainly worth picking up if you find it in a sale.  At the least, I would definitely recommend catching the countdown portion when it inevitably shows up on Netflix.  What did you all think? Let us know in the comments, and (Foley style cheap plug alert), I don’t think I’ve ever mentioned that I recently joined Twitter, so feel free to give a follow @JoeIsrael_.