For many WWE DVD collectors, a collection of War Games matches has always been one of the “holy grail” releases.  It was always one of the most popular responses when asked what collection WWE should release next.  Part of me thought we would never see this actually get released, but I’m happy to be wrong about that.  Even without watching a minute of this Blu-ray, I knew this would be a must buy.  This is the first time we’ve seen a lot of the War Games matches released on DVD or Blu-ray, and the fact that we have EVERY televised War Games match makes the release that much better.  Overall, this set delivered exactly what I expected.  Some great matches, some nonsensical matches, and a whole lot of historical value.

Disc 1 of the Blu-ray runs 4 hours, 10 minutes, and Disc 2 runs 1 hour, 50 minutes with 80 minutes of Blu-ray extras.  The Blu-ray is rated TV-14.  As Mark explained earlier this week, the 1992 and 1993 matches have no commentary from Jesse Ventura, and the 1988 match has no commentary.  Some commentary in the 1997 match in reference to Chris Benoit was muted as well.  On the Blu-ray front, the 1996 ECW bonus match does not have any commentary.

“It’s Time for the War Games”: The Format 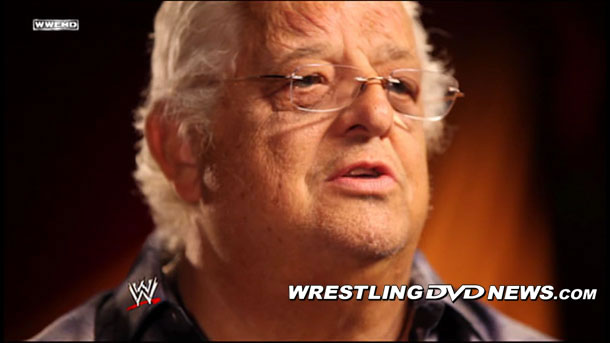 As mentioned in the intro, this set features every War Games match that has been televised in some fashion.  In between each match, we get a snippet of an interview with Dusty Rhodes.  Unlike Best of Clash of the Champions, he isn’t really serving as a host here.  Rather than simply introducing each match, Dusty gives insights into the history of War Games and what was going on in WCW at the time.  This serves as a bit of a double-edged sword.  You definitely will get some interesting tidbits from Dusty, and everything that he says feels very genuine.  The stories about the creation of the War Games context are particularly interesting.  At the same time, we don’t really get much context for each of the matches.  You can piece together some of the storylines from the commentary for each match, but it would have been nice to get a bit of back-story.  I did appreciate that we got an interview piece before each match.  I’ve always wanted WWE to do this instead of only using the host before a handful of matches.  It gives the feature a better overall flow.

“Submit or Surrender”: The Matches 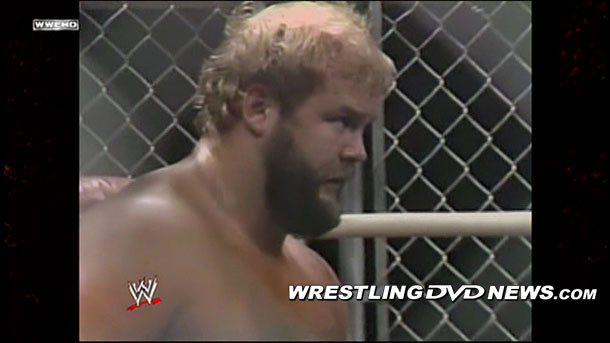 Overall an enjoyable match, but I did get the feeling that there was a bit of learning curve in dealing with the new match type.  The MVP of the match was JJ Dillon, who took a hell of a beating. The match really picked up once he got involved.

In this match, I think the wrestlers took what they did in the first match and only improved upon it.  There was a lot more storytelling going on here.  The term “controlled chaos” would be the best way to describe this. 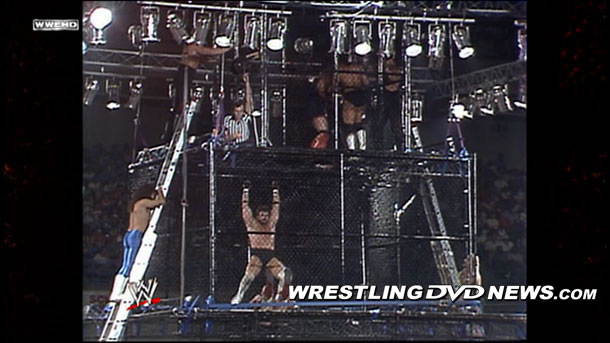 This gimmick was incredibly stupid.  It involved going from the top tier of the cage to the bottom to try to escape, but you could only move down a level during certain time intervals.  It felt more like a mini-game from Legends of the Hidden Temple than a wrestling match.  There also was a logistics issue in that by escaping the ring quickly, you left your team at a handicap disadvantage.  The only reason I gave the match the rating I did was because the match got good once it came down to only Garvin & Sullivan.  That happened way too late in the match, though.

While many of the War Games fit a pretty distinct storytelling formula, this one felt really formulaic.  There wasn’t really anything to this match that was all that unexpected or outside the box.  Since it’s a War Games match, you’re going to have fun, though.

This match featured a lot of very loud characters, which helped make it stand out.  The Freebirds make great opponents for the likes of the Road Warriors and Dr. Death, all of whom mix intense brawling and showboating really well. 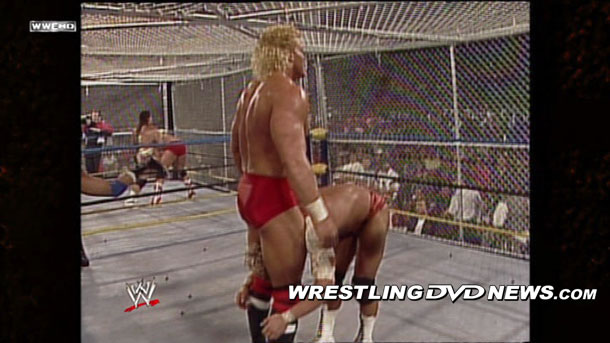 This match features a number of great workers (well, maybe not Sid), and they string together a very fun match.  There are a lot of fun spots, particularly one involving the Figure Four.  Pillman looks like a million bucks here, which is neat to see. 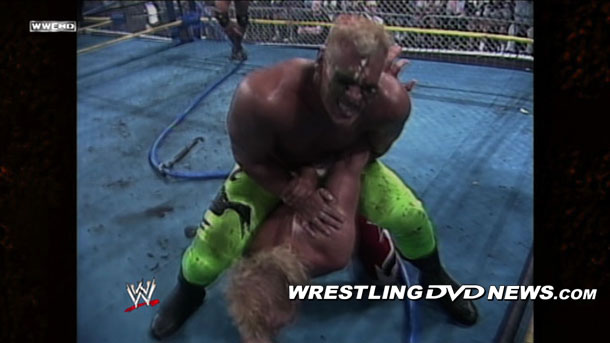 This might be the most famous of the War Games matches, and it is certainly the most brutal.  Rhodes and Austin in particular bleed buckets.  The big time feeling is huge here, which helps make the brutality feel authentic.  Add in the fact that most of these guys are pretty good in-ring workers, and you’ve got the makings of a classic match.

From an in-ring standpoint, this match was fine.  However, you never really get the feeling that there is much at stake.  The ending in particular further emphasizes that.  It comes completely out of nowhere, and doesn’t feel like it had any effect on the landscape of WCW at the time. 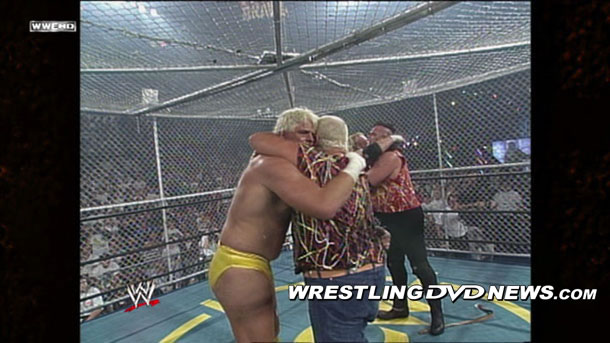 This match was probably the biggest disappointment on the set.  The heel team gets in almost no offense throughout this whole match outside of the time when they have a handicap advantage, and even at this point they still get beat up.  This includes the 5 minute opening period, in which Dustin Rhodes beats up Arn Anderson non-stop.  This is something that I don’t think should happen.  This predictability makes the match really dull.

I went into this match with even lower expectations than the previous one, but I enjoyed this match WAY more than I expected.  Even though there was really no doubt about the victor here, the Dungeon of Doom actually look like credible threats to “The Hulkamaniacs”.  May not be a technical masterpiece, but you will have fun watching this one. 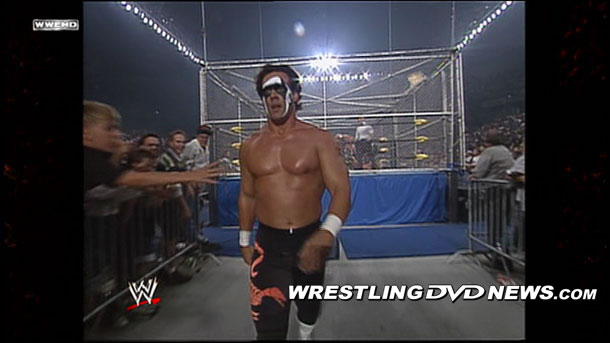 The nWo had just gotten going at this point, and I think this match does a good job of making them feel strong without making the opponents look like total losers.  The real story in this match involves the future of Sting, as this match would kick off his departure and return as the “man in the rafters”.

This match starts off pretty strongly.  This feels like a big time feud, and even if the in ring talent isn’t amazing, the match is still fun.  However, this match quickly falls prey to classic “WCW overbooking”.  The finish of this match goes on forever, unless you enjoy watching Kevin Nash beat guys up.

The antics with The Warrior in this match completely overshadow anything else going on.  Honestly, it’s worth watching just to witness some of the disaster that is Warrior’s WCW run.  The match itself is pretty generic and short. 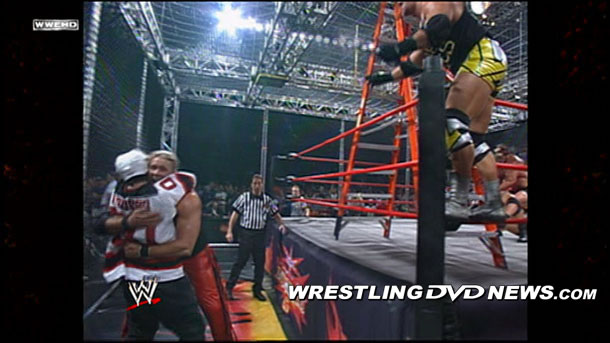 The “triple cage” gimmick is completely ridiculous (and, again, feels like it should be on a game show), and this match isn’t even booked all that well to begin with.  I know I shouldn’t complain about this, but the Harris Brothers and Kronik vanish about 8 minutes into the match with little explanation, and at this point, the match becomes more about Vince Russo than the actual wrestlers.  This match falls into that “so bad you can’t look away” category, similarly to the Lesnar/Goldberg disaster.

This match is joined in progress, so I decided not to give it a rating.  For historical purposes, it’s very cool to see this match.  The match itself isn’t really anything special, and since it’s joined in progress it takes a little while to pick up on all of the storylines going on.  There is a large post-match angle included as well, which is also a neat inclusion.

This match as a lot of fun to watch, but since there are so many wrestlers involved, it devolves into a giant brawl pretty quickly.  Shaving 5 minutes off this match wouldn’t hurt at all either.

Based on the wrestlers featured in this match, it shouldn’t be a surprise that this match is a weapons-filled bloodbath.  If that’s your type of thing, you will probably enjoy this.

“The Match Beyond”: Closing Thoughts

This DVD/Blu-ray comes with a lot of expectations.  For a lot of wrestling fans, War Games is the mecca of WCW.  After watching through this Blu-ray set, it’s not hard to see why.  For the most part, there is a “big match” feel to each of these matches, and a lot of the feuds do seem pretty personal.  As Dusty points out in one of the interviews, the gimmick did become a bit diluted over time (like most gimmick matches tend to be).  With the birth of the nWo, the War Games became a bit rejuvinated as one of the perfect gimmick matches to settle the WCW/nWo war.  As you can tell from my match descriptions above, the match quality does vary pretty wildly here.  For the most part, the classic matches are all solid, and some are fantastic.  As we go on, though, some of the matches become a tad overbooked and have silly endings.  I’ve always enjoyed multi-man matches, so I had fun watching each of these matches even if they weren’t great.  The strange choices WCW made in some of these later matches can be fascinating, so even if they don’t produce great wrestling, they are fun to watch. 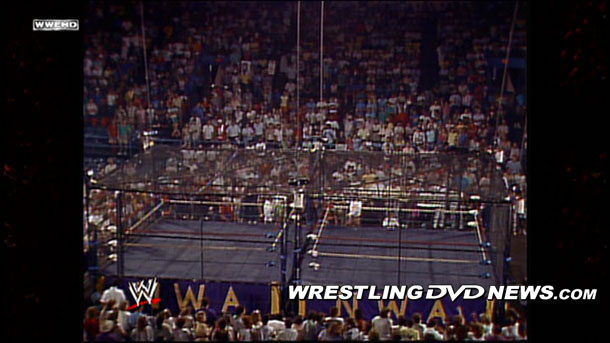 A personal highlight of this DVD/Blu-ray set is the strong sense of history you get while watching it.  I would compare it to a past set like History of the WWE Championship for WWE.  Just by watching through these matches, you see the changing landscape of the NWA/WCW.  I’m really glad each match was included because, for the most part, we get a match a year.  This allows us to “check in” on what’s going on in the company at that particular time.

I quickly discovered that I don’t think this set is really meant to be watched in a short time period, though.  One of the biggest downsides to the War Games concept is that the matches become very formulaic.  The formula is a great one, but if you watch a lot of these matches in a row, you will definitely start to see some similarities.  I would recommend watching this set over a longer period of time so that the similarities don’t become so distracting.  While I enjoyed watching almost every match on this set, I can’t see myself sitting down and watching the entire thing again.  Sure, I’m going to revisit this set a lot to watch certain matches, but that’s likely the most I’ll do.

As far as the Blu-ray goes, you do get some nice extras, but I wouldn’t call them essential.  The SMW match is neat from a historical perspective, but isn’t anything special.  The two ECW matches are a lot of fun, though.  If you are a big ECW fan, I would definitely recommend getting the Blu-ray.  Otherwise, I don’t think it’s necessary, especially since none of the matches are in HD to begin with.  The “Fantasy Booking with Dusty Rhodes” segment is fun, but after you watch it once I don’t see you revisiting it.

Overall, I think this is a must buy set from a historical perspective.  It’s awesome to finally have all of these matches in one place.  A lot of the matches are really good, and even the bad ones tend to be interesting to watch.  I’m sure a lot of you are already planning on picking this one up, but if you were on the fence, I’d recommend it wholeheartedly.  Did it live up to everyone else’s expectations? Let us know in the comments below!