Say hello to “The Bad Guy”. Kayfabe Commentaries‘ popular shoot interview series returns with a no-holds-barred interview with one of the most popular superstars of all-time in… 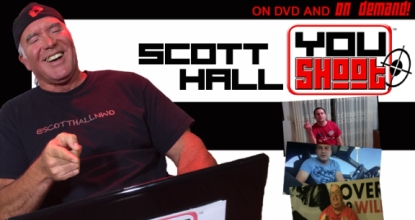 Whether as Razor Ramon or founding father of the New World Order with friend Kevin Nash, Scott Hall has had the kind of career many only dream about. With host Sean Oliver leading the way Hall relives many of the highest highs and tragic lows that have come to mark his life and career. 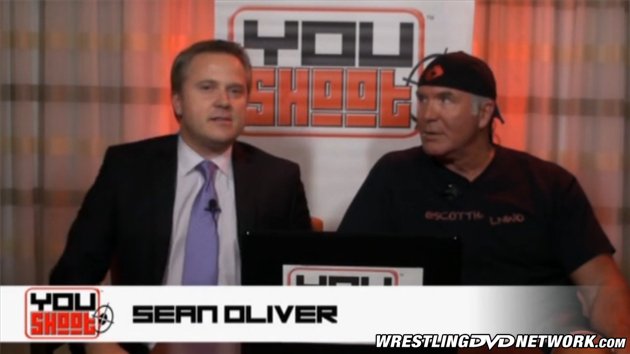 If you’re new to “YouShoot” you should know this isn’t the typical shoot interview. “YouShoot’s” questions are fan generated which has a tendency to take the interview in some pretty strange directions. Like previous installments, the show is broken into sections. Here Scott Hall covers topics like “Early Years”, “Sex and Drugs”, “Potourri”, “Scarface”, “Ribs”, and “Heat”.

The first thing that must be said is how good Scott Hall looks and sounds in this interview. Hall is clean, sober, funny, and honest, and for the most part his memory holds up extremely well. To start Hall talks about being paired with Dan Spivey as the “American Starship”, going to Georgia, and landing in the AWA after a stint in Kansas City. Hall admits that the lifestyle drew him to the business but that wrestling was always fun and something he loved to do. 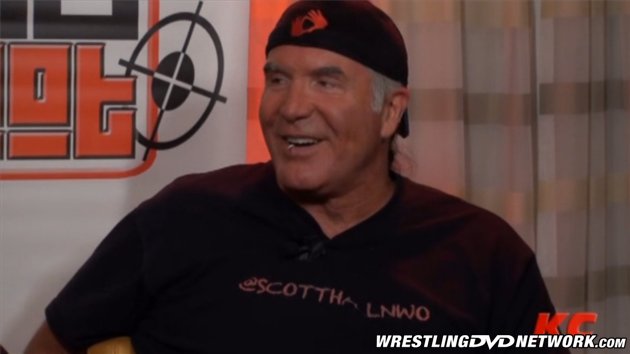 Talk quickly turns to “Sex and Drugs” and while the sex talk is light, often humorous, it does become tedious. The drug talk is highlighted by various tales of debauchery with the likes of the Kliq, Steve “Mongo” McMichael, and Curt Hennig among others. But where the conversation shines is in Hall’s honest and frank assessment of his own battles with substance abuse. Crediting the Menninger Clinic in Houston, TX for getting to the root causes of his self-destructive behavior (PTSD among them) and Diamond Dallas Page for saving him at a time when Hall didn’t care whether he lived or died, Hall is thankful to be alive and sees his life as an example that recovery is possible.

“I’m not a hypocrite about it, I don’t say that drugs and booze don’t work cause they do. They’re fun, they work,” Hall says. “But what sucks is when you wanna quit and you can’t. And then you hurt everybody around you.”

“Potourri” is a fun hodgepodge of topics that includes Scott Hall giving away his Intercontinental title to a terminally ill child at a Jerry Springer Show taping in 1995, his thoughts on scripted promos, the tryst that earned him major heat in WCW, the WrestleRock ’86 rap promo, and his thoughts on the Hulk Hogan “N-word” controversy among other things. 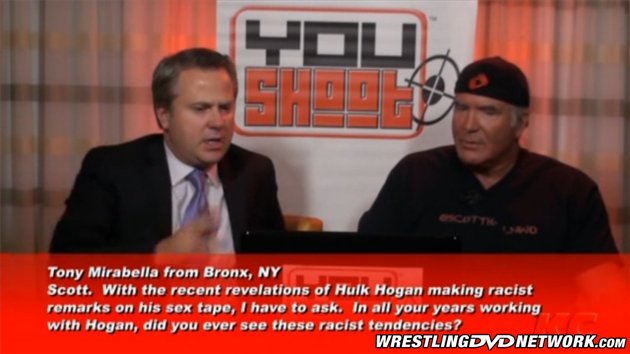 The “Scarface” portion of the interview is fantastic. Scott Hall reveals that “Shrug Shadow” was the name he had in mind for his new, undetermined WWF character. Vince McMahon originally shot down the Razor name citing popular heavyweight boxer Donovan “Razor” Ruddock. When Hall responded that he would “kick [Ruddock’s] monkey ass” in the now-famous Razor Ramon accent Vince “popped”. Hall tells how McMahon then personally oversaw the filming of the Razor Ramon vignettes (shot in a single day) and how they came to be. In a truly memorable moment Sean Oliver and Scott Hall discuss and re-enact their favorite moments from Scarface, complete with music.

Next, Hall discusses ribs, who were the best and some of his favorites, including Curt Hennig making “buddy bags” out of Greg Gagne’s and Scott LeDoux’s luggage, and the shaving of Sean Waltman’s eyebrows. This is probably the weakest portion of the interview. Though the section is entertaining there is nothing discussed here that can’t already be found online.

“Heat”, however, features a series of interesting and fascinating stories. Chief among them is the story of Hall’s decision to leave the WWF for WCW after squabbling with McMahon over merchandise royalties. After Hall’s final match at Madison Square Garden, which Scott remembers vividly, McMahon discussed staying in the WWF with Hall mere hours before Hall’s WCW deal went into effect. After hearing the details, however, Vince, unwilling or unable to offer a guaranteed contract, gave Hall the final blessing to go to Atlanta. 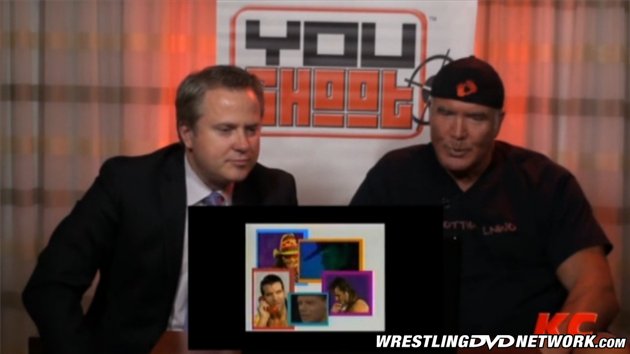 Some of the other topics touched on include stiffest workers; origins of the “surf walk”, “cha cha”, and “spooky fingers”; working with Bill Goldberg and Steve Austin; opinions on the “Montreal Screwjob”; Henning and Hall re-creating Scarface for McMahon; the infamous “drunk” angle in WCW; the recent JCW/GCW incident; personal issues with the Goldust gimmick in 1996; and thoughts on Shawn Michaels getting credit for the success of the WrestleMania X Ladder Match.

Clocking in at 2 hours and 25 minutes this is one of the best “YouShoot” interviews yet. Sean Oliver, as always, perfectly steers the ship and gives Hall the time and space to answer questions his own way. Honest, authentic, and funny, Kayfabe Commentaries’ latest DVD offering contains must-see material for any wrestling fan. A sort of hybrid with “Breaking Kayfabe”, “YouShoot: Scott Hall” is raw and real in ways few wrestling programs are. I can not recommend this enough.