I can’t say I really go for shoot interviews often and I don’t think there’s anyone who has recently departed WWE that I’d actually like to hear from (outside of maybe CM Punk), but an exception for me would be Theodore Long. Teddy’s long-standing character on WWE TV for over 10 years that I was quite fond of, combined with his career there prior to that as a referee, sparked my interest in checking out the “YouShoot: Teddy Long” DVD.

The Kayfabe Commentaries offering is 1 hour and 37 minutes in length. Believe it or not, two ‘themes’ running through the shoot are Viagra in wrestling and racism in wrestling, and that oddly turns out to be a good thing. Believe that, playa! Despite the aforementioned Viagra, sex references, some choice language (or just the trailer in general), things are kept pretty clean and professional for the most part, so you won’t feel too dirty after watching this one. 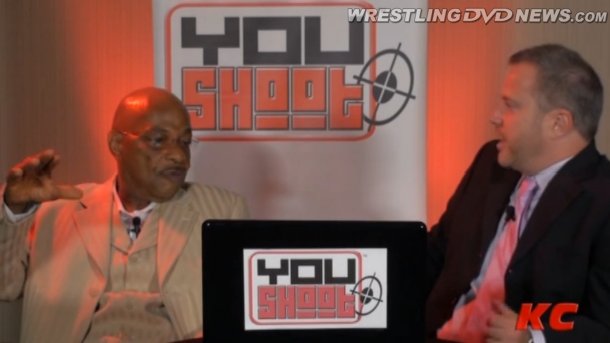 Stories from Teddy’s life on the road are aplenty. The questions posed to Teddy (in the usual “YouShoot” format of fan submitted questions in written and video form) allow those to flourish and are both interesting and diverse, leading to discussion of not only his time in WWE but also his early days in wrestling which date back to NWA in the mid ’80s, and some of his life in general. I’ve found Teddy to be fun to listen to in the few interviews I’ve heard before and that’s the case here. He seems open and honest with all responses, perhaps toeing the company line somewhat when discussing his time with WWE but never really holding back.

On that same subject, one criticism of the shoot is that there’s not always a whole lot of depth to Teddy’s discussion of his time in WWE, or perhaps rather that he’s not asked quite enough questions regarding it. However, throughout the feature you’re never far away from the next WWE centered question and the flow is generally good, so too are the topics. For instance, quickly into the interview Teddy’s release from the company this year is covered with discussion on whether or not he’s angry with them, if he felt he was gone too early and even his thoughts on Triple H’s impression of him on a recent episode of Smackdown. 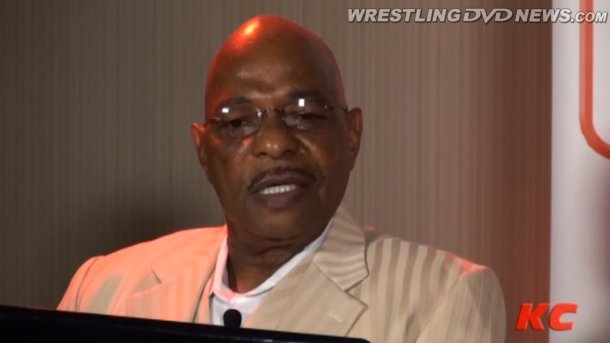 That criticism of the depth to the WWE discussion is only really joined by the negative of having bizarre fans wearing masks submitting video questions, although that seems to be a tradition for “YouShoot” releases. Apart for that, the rest of the interview is either good or really good! At times it’s broken up by fun extra pieces – such as one called “Players” during which Teddy has to name the 3 wrestlers who get the most women (Batista tops the list), and “Tag Match” where he has to make a tag match out of a list of wrestler and celebrity names given to him.

So, why were ‘themes’ of Viagra and racism a good thing in this production? The Viagra talk becomes more of a humorous running gag throughout the interview after Teddy revealed that he was once taken to “wrestler’s court” for selling it to some of the boys. A James Brown story ensues. The discussion of racism in wrestling is more on the eye-opening side, as Teddy says often people were “smiling to your face yet stabbing you in the back at the same time”. While he is sure to say racism is not prevalent in the present day WWE, he noted that during his time in the business the worst offenders for being racist toward him were Ole Anderson, Bill Dundee and Ric Flair. This leads on to Teddy giving his opinion of the greatest African American wrestler of all time and his take on the state of black wrestlers in the industry today. 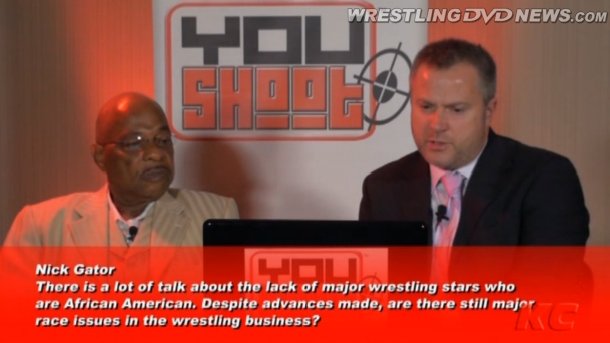 On the one hand Teddy Long’s comments on the subject of refereeing are very interesting and are among the best parts of this shoot interview (he gives his take on such topics as referees now being nameless, mistakes they often make, his best and worst matches he refereed and he even states that he’d like to go back and do it again now given the chance), while on the other hand they are rather harrowing, as he talks about refereeing the match in which Darren Drozdov was paralyzed (and what Droz said to him after it happened) and being a referee the night Owen Hart tragically fell to his death, witnessing the aftermath up close.

Some personal highlights for me of the WWE coverage were talk of his storyline with Kristal Marshall (the heart attack angle and how it was cut short thanks in part to Kristal and Bobby Lashley’s backstage antics), working with new talent such as Drew McIntyre and how he’d help them out along the way, his relationship with Vince McMahon, and the backstage fights he witnessed – such as between Eddie Guerreo/Kurt Angle, and William Regal/Booker T.

If Teddy Long talking candidly about his whole career from NWA/WCW through to WWF/WWE (and if he was ever asked to join ECW) isn’t quite enough, you might be convinced to get this DVD if you want to know the origins of his word “playa”, where his nickname of “peanut head” came from, the idea behind coming up with tag team matches on Smackdown, and if his walk to the ring was real or all part of the character. Check it out and holla, holla, holla!