The winner of the “Shawn Michaels: Mr. WrestleMania” DVD in yesterday’s giveaway is Sean (email address beginning “dabrisk1…”). Congratulations if that’s you!

Next up for Giveaway Week is your chance to win the “WCW Greatest PPV Matches” DVD from earlier this year. Start by “Liking” our Facebook page – Facebook.com/WDNcom.

After you’ve connected with our Facebook page, all you’ve got to do find the photo of the WCW DVD on there (also shown below), then “Like” and “Share” that photo.

That’s it! Enter before tomorrow to be eligible for the giveaway.

The latest word on “Macho Man: The Randy Savage Story” next month is that the total runtime of the DVD content will be approximately 6 hours and 12 minutes. On top of that, the Blu-ray edition will have approximately 1 hour and 14 minutes of extras.

Get a reminder of the full content listing for the DVD/Blu-ray at this link:
Complete Match Listing for WWE ‘Macho Man: The Randy Savage Story’ DVD.

As previously reported, the documentary feature on the set runs 1 hour and 34 minutes. 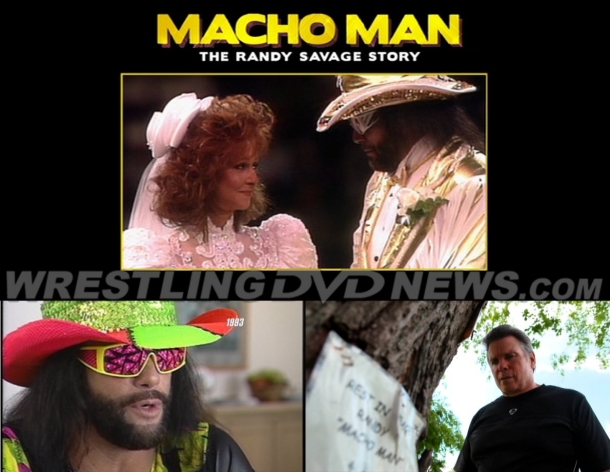 We’re now hearing that the format of the upcoming “True Giants” WWE DVD has changed. Instead of individual bios on each of the “giants” featured, there will now be more of a straight up documentary piece on the set, accompanied by bonus matches in the extras.

You can already pre-order the “True Giants” DVD or Blu-ray by clicking here. It’s scheduled for release to both North America and UK/Europe in December, then to Australia in January.

We’re also hearing rumblings of special 2015 WWE DVD or Blu-ray release planned for fans in the United Kingdom and the rest of Europe early in the new year.

Possibilities for what that might be include an exclusive Blu-ray version of “Best of RAW & Smackdown 2014” (releasing only on DVD format elsewhere), or an exclusive “Best PPV Matches 2014” DVD and Blu-ray (the series reportedly cancelled in the United States).

Please consider this unconfirmed until WWEDVD.co.uk make an announcement.

Look out for these 8 WWF/E DVD rarities ending on eBay today and tomorrow:

Look out for these 8 WWE Blu-ray deals expiring on eBay today and tomorrow: