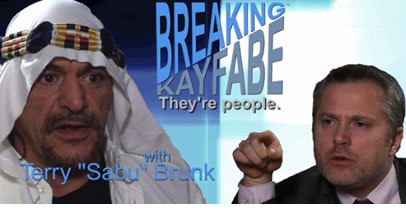 In the newest Kayfabe Commentaries DVD release, Sean Oliver and the gang are back and “Breaking Kayfabe” with: the homicidal, suicidal, genocide, death-defying maniac known the world over as… Terry Brunk… well, Sabu (as he’s more commonly known).

The Breaking Kayfabe series is the most unique series of shoot interviews done by Kayfabe Commentaries (or anyone, come to think of it). The premise of the series is to discuss the personal lives of the superstars in question rather than their in-ring exploits, where the other pro-wrestling shoot interview companies naturally place their focus. 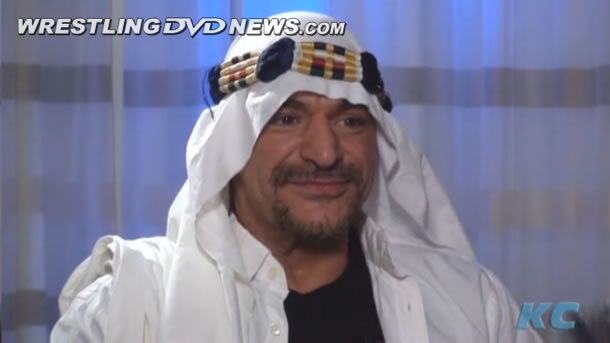 Sabu is one of those individuals in wrestling that we (the fans) don’t really know much about, yes we know the wrestler who helped inspire a revolution, but other than this and his family link to The Original Sheik, what else do we really know? So, thinking that at the conclusion of this 75+ minute interview we would know more about Terry Brunk was really very intriguing.

Sabu hasn’t really done a whole lot of shoot interviews, especially considering that he has been around the business for nearly 30 years now. During the interview we learn about how Sabu feels about interviews and talking on camera, the reason we haven’t seen many interviews from him and we why we never really saw him do promos.

Sean Oliver does a great job as the host (as always). He manages to get Sabu to open up but also doesn’t shy away from posing follow-up questions; which many other shoot interview hosts don’t do — which as a viewer is really infuriating. The interview opens up with a great ice breaker, as Sean follows up on Sabu’s YouShoot interview (also available at KayfabeCommentaries.com) with a story about Kurt Angle’s penis, which puts Sabu in a great mood and all set for the rest of the more serious topics to come in the rest of the interview.

You can watch an exclusive preview clip of the Sabu DVD shoot below.

Throughout the interview a number of topics are discussed, including stories about: growing up and his relationship with The Sheik, what kind of man The Sheik was away from the business, his thoughts on drug use in pro-wrestling, the responsibility of the promoters, rehab and coping with constant pain, as well as the events surrounding the first Extreme Rising event in 2012 (where it was reported that Sabu had passed away!).

Another of the more intriguing topics was the discussion of “where is Sabu’s due?” If you have seen previous Kayfabe Commentaries releases when Sabu is brought up, everyone comments that Sabu is the man who hasn’t got his just due from the business; as without a doubt Sabu brought ECW to prominence and helped change the wrestling business. Sabu certainly isn’t the most boastful of wrestlers, in fact you could say through the interview he is incredibly grounded and maybe even undervalues his contributions to the business. Rightly, Sabu does comment that he was possibly his own worst enemy when it came to the ‘business’ side of things as he tended to place his focus on his in-ring abilities in the vain hope that his work would speak for itself, but maybe politics are a bigger part of pro-wrestling than the ring work.

Sabu discusses his close relationship with his mother, how he met his wife (and how Terry Funk was involved), along with whether he would ever accept an invitation to the WWE Hall of Fame. 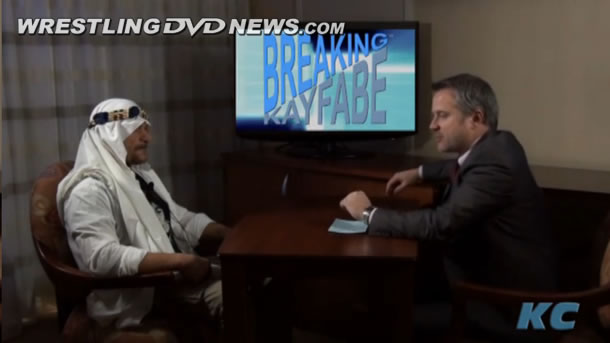 Along with the “Timeline” releases, “Breaking Kayfabe” are my favorite Kayfabe Commentaries DVD releases. The series (pardon the pun) breaks the mold of normal shoot interviews by turning the tables on the mundane, repetitive and formulaic questions.

After seeing a bunch of Breaking Kayfabe interviews, Sabu’s edition ranks at the very top and the 77 minute interview just flew by. It is very easy for me to give it my highest recommendation and this is most definitely something you should have on your wrestling must-see list.

“Breaking Kayfabe: Terry “Sabu” Brunk” is available now at KayfabeCommentaries.com.
You can purchase a physical DVD copy or stream instantly On Demand.