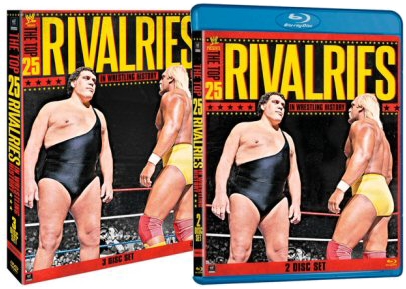 In case you missed it, The Top 25 Rivalries in Wrestling History has now been listed for pre-order here on WWEShop.com. That’s available on DVD and Blu-ray formats and is the next release this month following WrestleMania 29.

We can now reveal that one store exclusive for the WrestleMania 29 DVD will have a limited edition dog tag bundled in. We can’t yet confirm which store will stock this, but as you probably recall FYE has offered a dog tag version each year since the WrestleMania 26 DVD and therefore it’s very likely that will remain the case this time around. 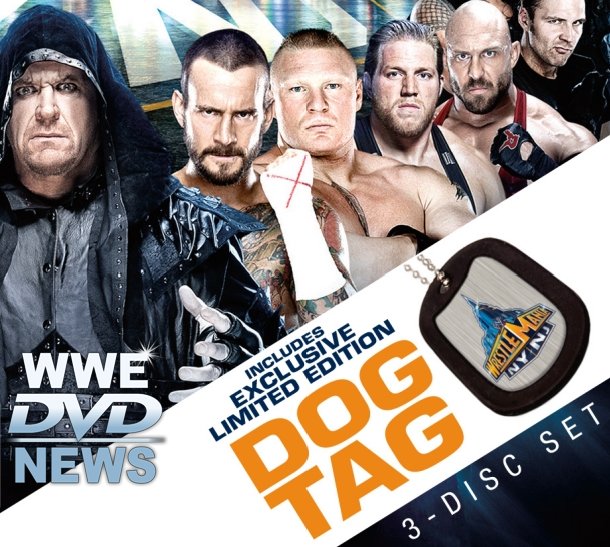 If that exclusive or the recently announced WWEShop packages don’t excite you, the standalone WrestleMania 29 DVD and Blu-ray editions can be pre-ordered from $19.99 on Amazon using the widgets below. We are just nine days away from release day.

Here are some stand-out WWE DVD auctions to track, all expiring in the next few days. 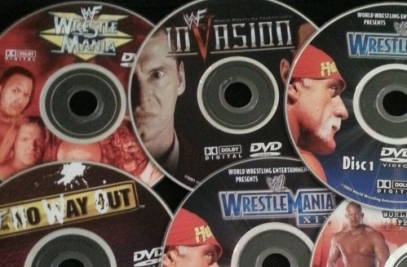 – $31, three days remaining. Worth keeping an eye on because these have been selling up to and over $100 as of late.

– A rare DVD you must already be aware is scarcely seen for sale, currently $56 and not long to go!

– At $5 with just hours remaining this could be a steal.

– This seller has lots of the UK exclusive Tagged Classics available to US buyers and they are being auctioned off for cheap prices. Great if you can play Region 2.

– No cases but lots of great rare DVDs to be had like WM15.

– Another potential steal at $4.99 for the two disc version.

– $19.99 is a bit steep considering the cheap FYE sightings but if you can’t find it, well here it is.

– Great if you’ve got the Anthology volumes but no outer box.

For All Mankind + Socko

– $20 for all those, including WWF Tropical Pleasure & Divas Search aint bad.

– Prices only going up for this one. Two chances.

– Last a not very well described lot of 19 WM DVDs/Blu-rays for a steal price. Lucky day for whoever spots it first.

Bret Hart: The Dungeon Collection will finally hit UK/Europe this month, on May 13th. You can pre-order your DVD or Blu-ray here on WWEDVD.co.uk. Below is a new preview clip.

More news for UK fans – the WWE Studios movies The Reunion, Inside Out and Bending the Rules will be released to Europe on DVD and Blu-ray for the first time ever from July.

Anyone pre-ordering The Reunion at WWEDVD.co.uk will be entered into a draw to win one of two John Cena signed, framed Reunion cover sleeves. These will be personalised to the winners and contain the sleeve, discs and COA all professionally framed. Winners also get a big bundle of Cena merchandise on top so this is quite the prize!

Mick Foley and Vader shared some comments on Twitter recently about the new “For All Mankind” DVD and Blu-ray. Foley praised Vader for his contributions to the documentary piece. As you may know, one chapter of the biography is devoted to Vader and their feud, however, there were no Foley/Vader matches included on the set.

Very thankful to have insight on the DVD from @itsvadertime – one of the fiercest in-ring monsters ever – on our brutal 1993-94 WCW battles.

Currently, for reasons unknown, the Blu-ray edition of the new Mick Foley feature (the version with Mr. Socko bundled in) is listed as “Under Review” on Amazon and unavailable to purchase. You can take a look at that over here. It is possible Amazon were mistakenly sending out copies without the bonus item included. The full message reads as follows.

While this item is available from other marketplace sellers on this page, it is not currently offered by Amazon.com because customers have told us there may be something wrong with our inventory of the item, the way we are shipping it, or the way it’s described here. (Thanks for the tip!)

We’re working to fix the problem as quickly as possible.