This week Throwback Thursday on WrestlingDVDNetwork.com journeys to a truly groundbreaking moment in modern wrestling history as we relive ECW’s very first Pay-Per-View event, Barely Legal, as seen, of course, on the WWE Network.

Though Extreme Championship Wrestling’s hardcore product scared PPV providers away for years they managed, thanks to fan demand, to land a PPV spot for early 1997. But the Mass Transit Incident, and the subsequent bad press, cost ECW the PPV on Christmas Eve of 1996. After months of negotiations and fan demand ECW was returned to the PPV schedule by a select few providers for April 13, 1997 – 20 years ago today! Per negotiations the show would start at 9PM, as opposed to the standard 7PM, and feature a toned down product. 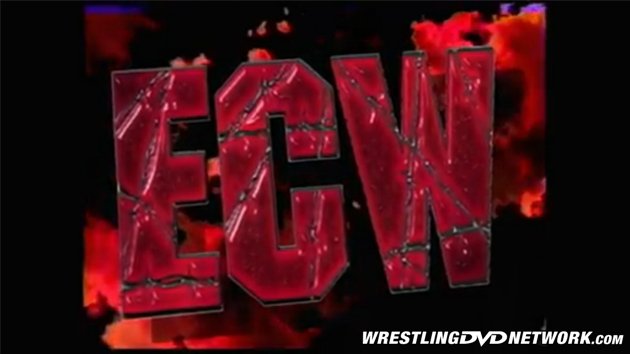 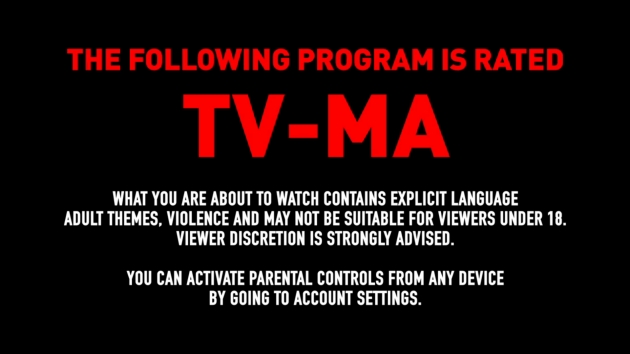 Built around three main stories; Terry Funk’s pursuit of the ECW World title, the nearly year-long feud between Taz and Sabu, and the bitter war between Shane Douglas and Pitbull #2, Barely Legal remains, without question, the most important event in ECW history. The event would become immortalized in Beyond the Mat, along with Funk’s journey and Heyman’s pre-show speech.

Context for this one isn’t an issue as all previous editions of ECW Hardcore TV, as well as select supercards, are currently available to view on the Network.

A note on edits. Regular readers of TBT will know I don’t mind minor edits on the Network, but the edits to Barely Legal are ridiculous. Segments are missing (like Terry Funk’s vignette) and language is both censored and uncensored, as are hand gestures. The only constant is the music edits.

The show opens with Joey Styles in the ring welcoming us to ECW’s very first PPV event. As Styles begins to run down the card the ECW World Tag Team Champions, The Dudley Boyz, come to the ring and interrupt him. D-Von runs down the fans and tells the fans it’s time to “testify”, after which the usual ECW opening airs.

In the ring Joel Gertner introduces the Dudley Boyz. 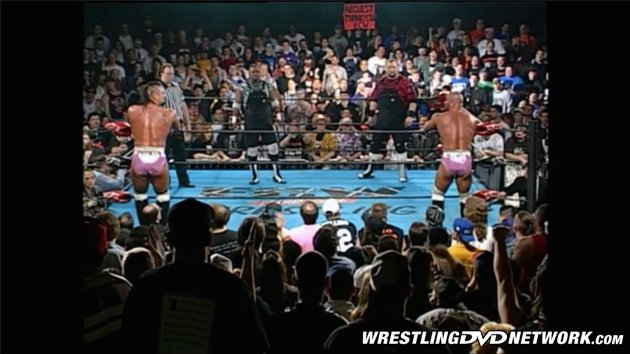 Though this match set the tone of the night and got the crowd hot, it’s little more than a glorified squash. After minutes of pummeling the Dudleys, Saturn and Kronus hit Buh Buh Ray with Total Elimination to win the ECW World Tag Team titles for the third and final time as a team at 6:33, ending the Dudley Boys second reign at 29-days.

After the match Joel Gertner gets on the mic and says that on the “stud muffin” scoring system, by a score of 86 to 83, the Dudley Boyz are still the champions. Saturn and Kronus respond by crushing Gertner with Total Elimination. 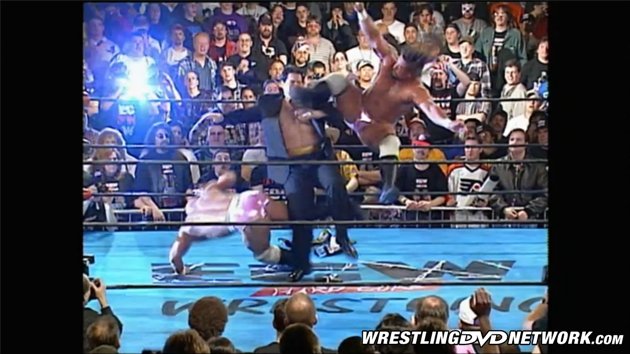 Next Joey Styles talks about the number one contender “three-way dance” before throwing to a highlight package of The Sandman.

After the vignette Joey Styles announces that the scheduled Lance Storm/Chris Candido match is off after Candido suffered a torn bicep. Though he can’t wrestle, Candido is in the ring and complains about not being advertised and dares Sandman to hit him “with a stick”, before trashing Stevie Richards and Terry Funk, saying it’s Chris Candido who should be in the main event and that he’ll be a part of the show somehow tonight. 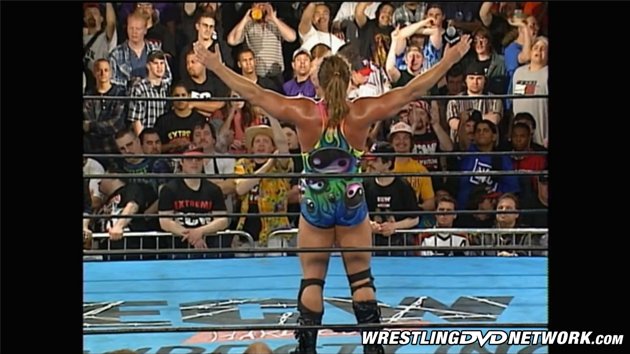 This is the match (including the post-match promo) that put RVD on the map in a big way. The match itself is a great little bout featuring some unique psychology. Lance Storm makes a comeback late and tries to put RVD out with a steel chair. RVD turns the tables with a Van Daminator before hitting a beautiful standing moonsault for the pin at 10:10.

After the match RVD gets on the mic to say that he sold out to himself for wrestling on the PPV after only being chosen to replace an injured wrestler. RVD says his win on this night means he’s “worth more money here. And Rob Van Dam is worth more money elsewhere.” The crowd responds by chanting “Get the f**k out!”

Terry Funk’s vignette should air here but, for whatever reason, it’s been cut. 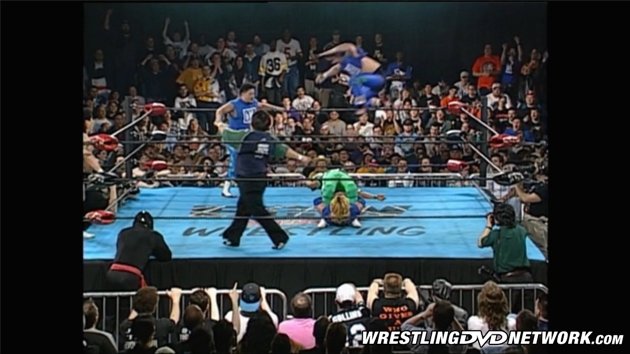 This is just a great, great match. A Barely Legal preview match, featuring Gran Naniwa (in place of Yakushiji) aired on the March 24th edition (#205) of HCTV and was arguably as good, if not better, than this match. These six guys simply tear the house down in a match full of great wrestling and high flying action. Great Sasuke hits a devastating powerbomb on Taka Michinoku before closing the show with a beautiful tiger suplex for the pin at 16:57.

Next Joey Styles introduces a pre-taped promo from Big Stevie Cool, who says that tonight’s “three-way dance” isn’t about “Big Stevie Cool” or the bWo, but about Stevie Richards coming out of his shell, becoming a man, and earning respect. 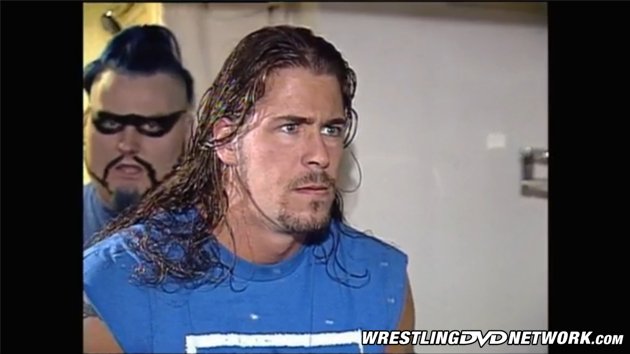 Shane Douglas and Francine come to the ring for the next match and Douglas gets on the mic to say that he came back to ECW to lead ECW to the “promise land” of Pay-Per-View. Footage of the Douglas/Pitbulls angle plays as Douglas trumpets his history in ECW, winning the TV title, and breaking Gary Wolfe’s (Pitbull #1) neck.

The stipulation in this one is that if Pitbull #2 loses, the “masked man” would have to unmask. As hot as this angle was, this match, save a few scant moments, is a dud. At no time in this match is the eventual outcome ever in doubt. The crowd, dead for most of this match, finally comes to life near the end. Pitbull #2 eventually steals the chain from Douglas’ right boot and begins using it when Chris Candido runs out to interfere. When Pitbull #2 tries to go after Francine, Douglas takes advantage. After a failed schoolboy Douglas ducks a Pitbull #2 clothesline and connects with the belly-to-belly to retain the TV title at 20:43.

After the match we hear Rick Rude over the PA telling Douglas that “a deal’s a deal” and to turn over the girl or get the “ass kickin’ of a lifetime.” A masked man dressed in Rick Rude’s robe comes to the ring and kisses Francine, who acts like it was Rude. Douglas attacks the man from behind and removes the mask to find Brian Lee, the third member of the “new” Triple Threat. Rick Rude, dressed in “riot gear” at ringside the entire time, is standing behind Douglas. Rude drops Douglas with the nightstick before Lee crushes Douglas with a chokeslam. 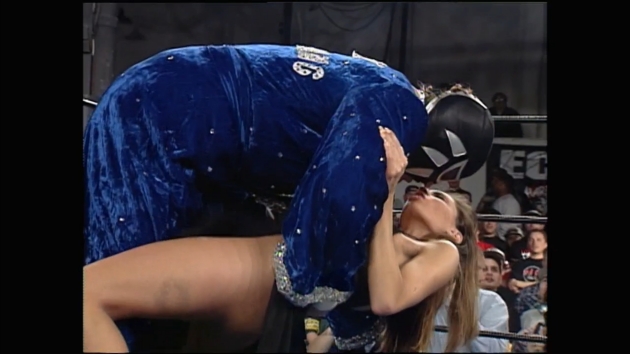 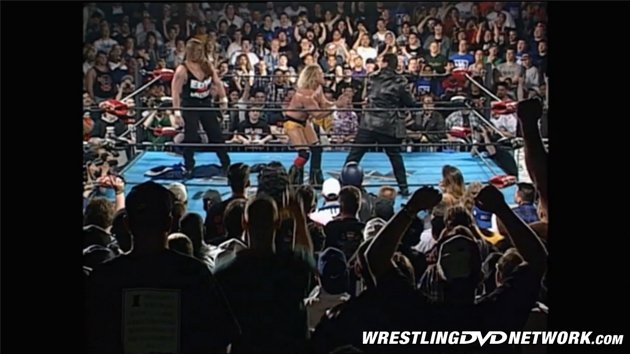 In the back, Raven says that the world has tuned in to see Terry Funk, a “has-been”, defeat “greatest grappler of the modern era” (Raven) while “10%” have come to “rage against the machine”, to show themselves as martyrs of a dysfunctional society, and see Raven win. “Quote the Raven, nevermore.”

Next, Taz, with Bill Alfonso, says the talk is over, that he’s waited his entire life for a match like tonight’s and an opponent like Sabu. We see footage of Taz choking out Bam Bam Bigelow, Paul Varelans, 2 Cold Scorpio, RVD, and Chris Jericho. Taz hopes Sabu is prepared for war because he’s going to choke Sabu out.

This angle was so well executed, the hatred so well defined, that some fans expected nothing short of a legitimate death match. Though these two would have an even wilder brawl two-years later at Living Dangerously ’99, this match remains the definitive showdown between these two hardcore icons. This one is an even, back-and-forth brawl until Taz hits a series of Taz-plexes that injures Sabu’s neck before locking in the Katahjime for the submission win at 17:49.

After the match Taz offers Sabu a rematch anytime, anyplace. The two shake hands and embrace as RVD ambushes Taz. Sabu joins in, eventually putting Taz through a table at ringside. Alfonso gets in the ring, looking to fight, before taking off his “Team Taz” gear to reveal a Sabu shirt. Alfonso says he bet on Sabu and that Taz cost him a lot of money. RVD says that those who don’t like him at least respect him, and now they must respect “my entire family.” RVD tells the “other promoters” to get in touch with Alfonso. “He knows my schedule,” RVD says. “And I love to work Mondays.” 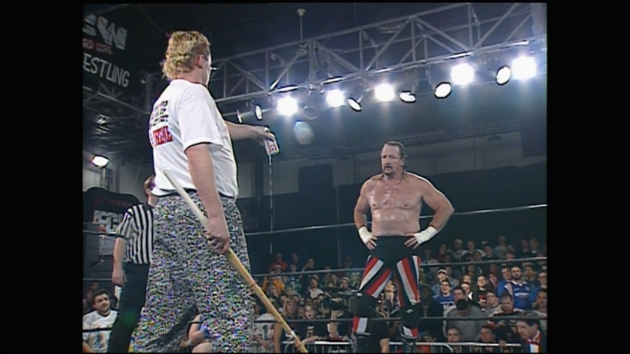 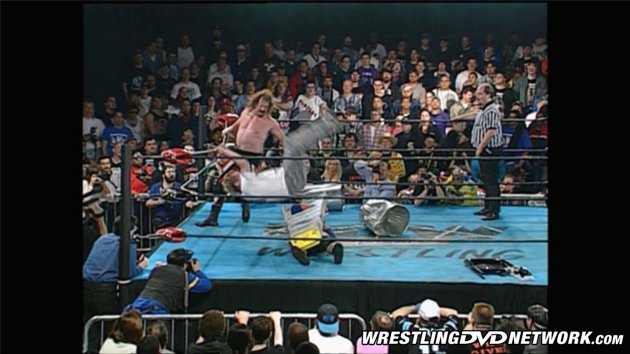 Originally it was to be Tommy Dreamer instead of Funk but Dreamer gave up his spot in the match to Terry Funk out of respect. The match itself is a hardcore war that stands as one of the best “three-way dances” in ECW history featuring non-stop action and numerous iconic moments. Sandman and Terry Funk put Richards out after a double powerbomb at 15:44. Sandman and Funk continue to brawl, through barbed wire and trash cans, until a Richards assist allows Funk to hit the moonsault for the pin, and the title shot, at 19:12. 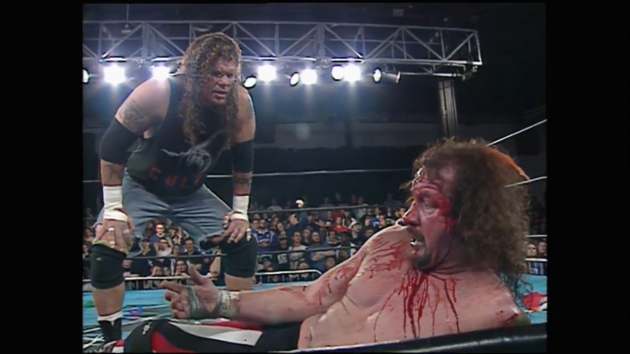 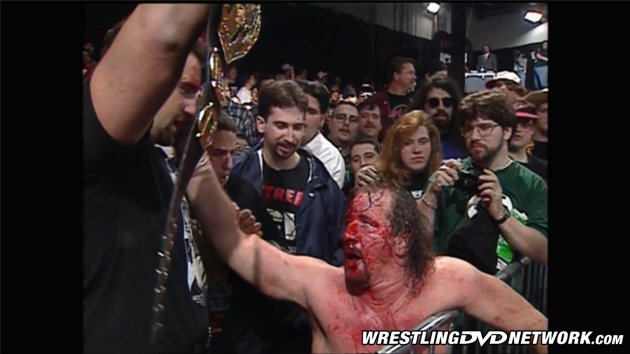 The previous match is barely over when Raven comes out and attacks Terry Funk, hitting a drop toe hold on a chair that has Funk bleeding like stuck pig. After putting Funk through a table Raven calls out a bunch of people from the back. One of them, Reggie Bennett, attacks Funk with a chair before botching a piledriver or powerbomb or something! Raven grabs the mic and tells Dreamer that he’s going to end Funk’s career and do it at Dreamer’s feet. Dreamer stands up and stares Raven down when Big Dick Dudley shows up and tries to chokeslam Dreamer off the balcony. Dreamer goes low and chokeslams Dudley off the balcony through three tables the Nest set up. Soon enough Dreamer is in the ring and DDTs Raven. Out of nowhere Funk reverses a Raven body slam into an inside cradle for the pin at 7:21 to win his 2nd and final ECW World Heavyweight title. This marked the end of Raven’s 2nd and final reign as ECW World Champion at 127-days.

After the match, as the ECW Arena goes nuts, Terry Funk celebrates with Tommy Dreamer and the fans as Joey Styles tries to sound emotional. Styles plugs ECW’s next PPV in August as the show goes dark. Literally. Minutes after the show went off the air the transformer blew and the ECW Arena was left in darkness. Or so the legend goes.

The historical significance of Barely Legal is massive. The event legitimized ECW overnight, making them a real force in the industry and the true #3. While not the classic event later ECW PPVs would be, Barely Legal was an excellent first attempt that calmed the PPV providers and proved to fans that ECW belongs with the “big boys”. If you haven’t seen it, it’s worth checking out. 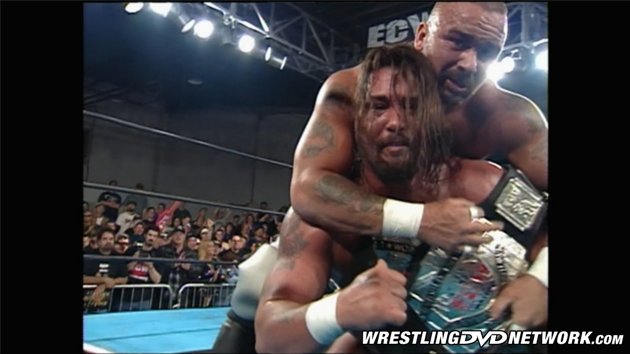 Already subscribed to the WWE Network, are ya? Then check out ECW’s first Pay-Per-View now! As always, don’t forget to tell us what you think in the comments below.

Watch every ECW PPV in history, Payback 2017, and over 7,500 more hours of content on the WWE Network. Your first month is FREE! Click here to subscribe to the WWE Network.