On this date 15 years ago Extreme Championship Wrestling ran their pay-per-view swan song with Guilty as Charged 2001 from the Hammerstein Ballroom in New York City.

To mark the occasion Throwback Thursday on WrestlingDVDNetwork.com looks back at ECW’s final televised show, Guilty as Charged 2001, as seen on WWE Network. 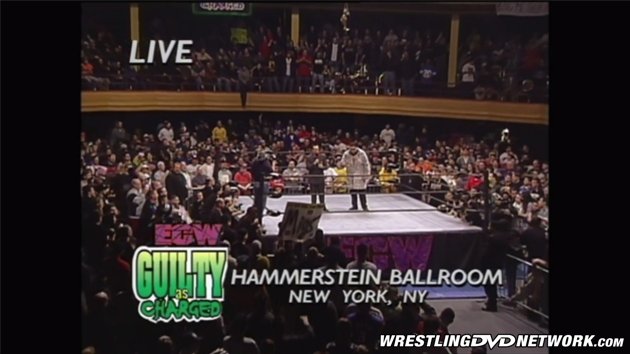 By this time, ECW was in a nearly vegetative state. Hardcore TV tapings had stopped; more shows were canceled than run; few, if any, of the talent were being paid; and Tommy Dreamer was largely in charge. After December’s PPV, ECW ran only two shows, Dec. 15th in Queens and a final ECW Arena show on the 23rd. Only the fanbase was keeping ECW from going completely dark, and even they knew the end was near.

There is no context to speak of on the Network as only the previous month’s Massacre on 34th Street is available for viewing. Edits are a big deal in this one as many of the ring entrances, and a few little things, are cut entirety. The Live event was slightly longer than the Network version.

We open the show with a lengthy music video (Rage Against the Machine’s “Renegades of Funk” is overdubbed with generic music) highlighting the feuds and matches on the card. In the ring Joey Styles and Joel Gertner do their usual shtick. Gertner then introduces the team Gertner says are future ECW Tag Team Champions, Joey Matthews and Christian York. 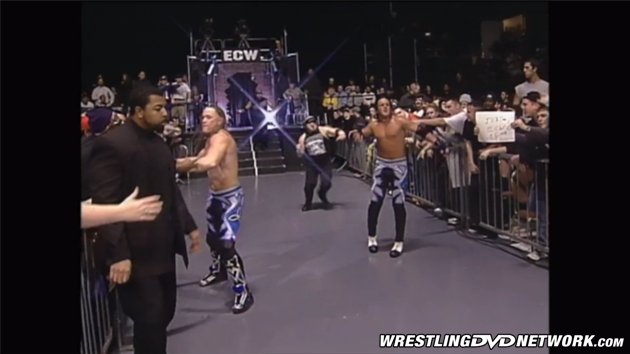 York and Matthews are attacked from behind by The Baldies (Tony Devito & Angel) while Joel Gertner is DDT’d on the floor. Jerry Lynn comes in, hits the cradle piledriver on Matthews, allowing Cyrus to make the pin at 2:43. After the match Cyrus pays off The Baldies with cigars before Jerry Lynn calls out Rob Van Dam who does not come out.

After Lynn’s promo we get an extended cut of the standard ECW opening.

The final televised ECW Tag Team title match is also Roadkill & Doring’s last ECW match together as Roadkill would miss the last ECW shows of Jan 12th and 13th. Chris Hamrick’s interference finally backfires and Doring and Roadkill connect with the “Buggy Bang” on Dinero for the 1-2-3 at 10:07 to retain the titles in a decent contest.

After the match Chris Hamrick and Hot Commodity do a number on the champs until Nova makes the save and an impromptu match is under way. 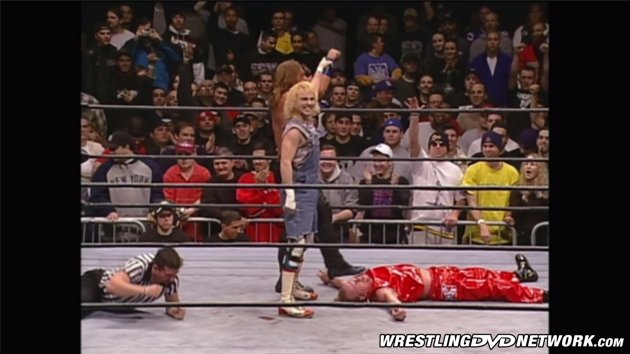 This is a decent back-and-forth match that sees Nova battling outside interference as much Hamrick. After a false finish at 5:08 and much interference, Nova hits Hamrick with the “Kryptonite Krunch” for the Spike Dudley counted thee-count at 7:48.

Next we get the standard promo from Steve Corino, with Jack Victory, about the upcoming ECW World title match.

— “‘I Quit’ Match” (WATCH)
“The Enforcer” C.W. Anderson vs. “The Innovator of Violence” Tommy Dreamer

This is a smart, psychological brawl. In the end, after “towel boy’s” interference, Dreamer nails the “Spicolli Driver” from the second rope through a table. Out of the wreckage Dreamer grabs a strip of banding from the table, wraps it over Anderson’s eyes, and pulls back on a modified crossface for the submission win at 14:10. After the match the two shake hands.

Next we get a lengthy interlude featuring Corino hitting on Francine and Justin Credible in the bathroom with Missy Hyatt. When the segment ends we’re back in the ring with the next match. 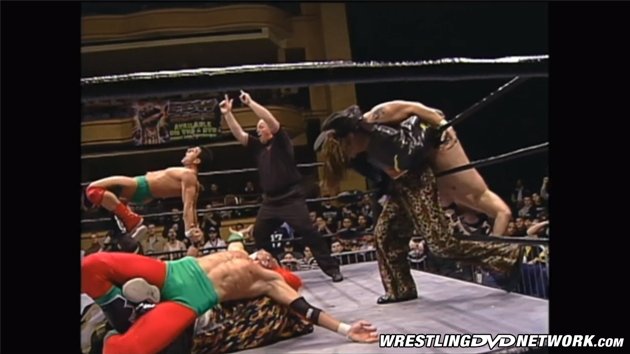 These are the kinds of matches that ECW became famous for. This one is a high-flying demolition derby. After Big Sal E. splashes Kid Kash, Tony Mamluke scores the pin at 6:58 to eliminate Kash & Crazy from the match. In the end Tajiri saves Whipwreck from a double Fujiwara armbar before the two connect on duel tiger suplexes for the simultaneous pinfall at 13:32 to earn a shot at Doring & Roadkill’s titles.

Next is a promo from The Sandman about the ECW World title match.

This isn’t even a match. After a short brawl Rhino runs in and wipes everybody out before nailing a sick looking second-rope piledriver on Jasmin St. Claire.

NO WINNERS declared (No Contest, :53)

Afterward we get an angry pre-taped Rhino promo: “I’m not done yet.” 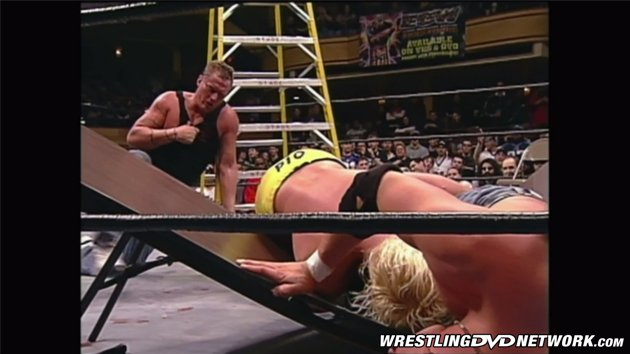 After Sandman stole the ECW title at the end of Massacre on 34th Street this “TLCC Match” was made to settle the dispute once and for all. This match feels rushed, though. While there are plenty of great spots, the match never seems to find a proper pace or tone. After Corino and Credible drive each other through a table Sandman scales the ladder and grabs the title at 13:10 to become the NEW ECW Champion for the 5th and final time.

After the match Corino, Credible, and Sandman shake hands. The Baldies come out next but Corino and Credible fight them off. As Sandman celebrates Rhino sneaks into the ring, attacks Sandman, and threatens to “kill” Sandman’s family if Sandman doesn’t give Rhino a title match right then and there. Sandman accepts. 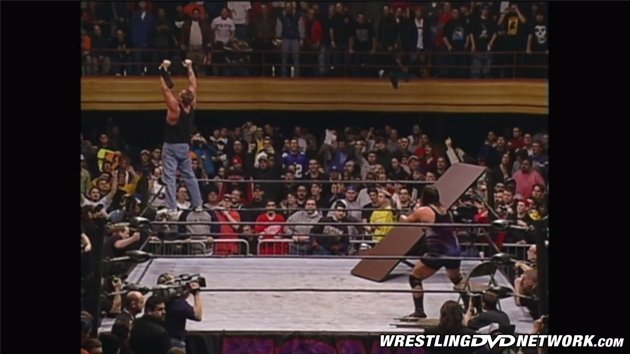 Rhino gores Sandman through a table in the corner, piledrives Sandman off the ring apron through a table, and hits another piledriver on the shards of a broken table to score the 1-2-3 at 1:25 to win the ECW World Heavyweight title for the first (and final) time.

After the match Cyrus challenges any man from any promotion to a fight with Rhino. Rob Van Dam’s music hits and the two stare each other down until Jerry Lynn runs in and attacks RVD from behind, kicking off the final match of the night. 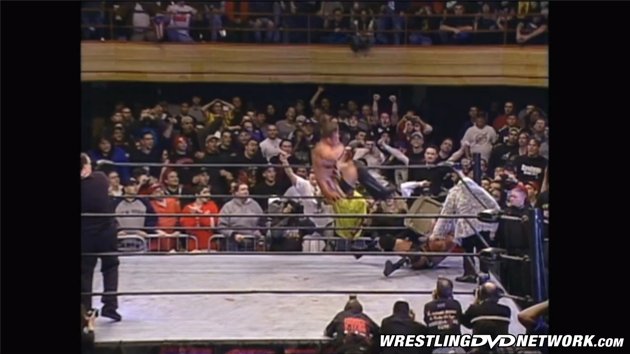 This is the match of the night. Rob Van Dam and Jerry Lynn took ECW to a new level, even headlined the very first ECW on TNN, so it’s only fitting that RVD and Jerry Lynn close out the final ECW PPV. After a solid back-and-forth match reminiscent of their earlier work, Joel Gertner arrives to assist RVD, sticking it to Cyrus one final time. Gertner holds the chair for RVD as Van Dam crushes Lynn with the “Van Terminator” for the 1-2-3 at 19:32.

After the match we see Steve Corino, Jack Victory, Justin Credbile, and Francine together forming a new stable. Next up is the highlight package and a promo for Living Dangerously 2001.

In hindsight this show feels like a One Night Stand show as opposed to an ECW PPV. While the writing is on the wall that ECW is dying there was still an eye to the future (Rhino’s title win, the new Francine led stable, the Unholy Alliance’s push). Though the PPV is mostly intact this is, perhaps, the most egregious example of editing on the WWE Network. Some fans love this show, others not so much. But ECW purists will always have a soft spot on their hearts for Guilty as Charged 2001.

ECW ran their final show ever in Point Bluff, Arkansas just six days later on January 13, 2001, where a simple yet poignant chant of “Please Come Back” played ECW into history.

And that’s a wrap for TBT this week – thank you for reading! Are you a WWE Network subscriber? If so, check out ECW’s final PPV, see it for yourself, and let us know what you think.