Throwback Thursday is back for another excursion through the archives of – you guessed it – the WWE Network. TBT goes back 24 years to the day to revisit ECW Hardcore TV #21.

By the end of August 1993 Eastern Championship Wrestling was in a state of transition. Eddie Gilbert, whose personal demons were beginning to take their toll, was nearing the end of his run in Philadelphia. Paranoid that Paul Heyman and Tod Gordon were looking to push him out and join Jim Crockett’s upstart World Wrestling Network (WWN) promotion, Eddie Gilbert was threatening to leave ECW. While the relationship between Gilbert and Gordon soured, the relationship between Heyman and Gordon flourished as the two traveled together and booked entire programs on the fly while on the road. 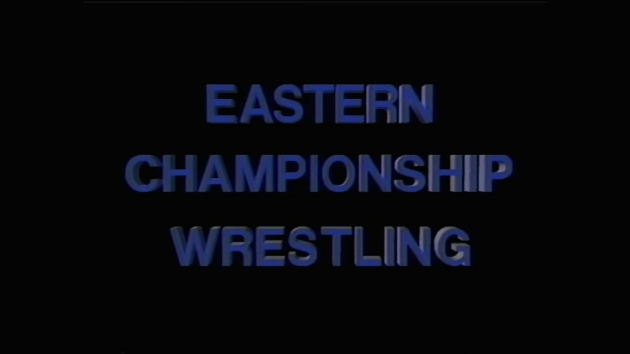 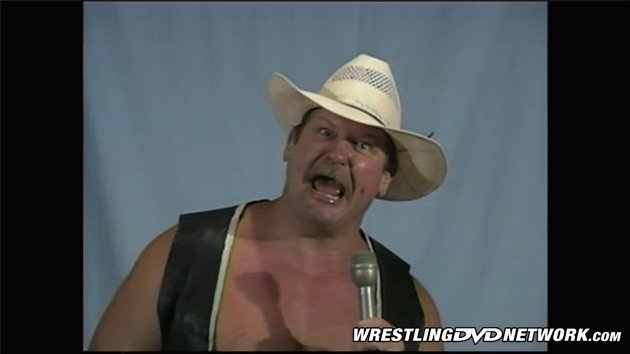 Less than a week after this edition of HCTV aired Tod Gordon, at Eddie Gilbert’s insistence, would join the National Wrestling Alliance at the 1993 convention in Las Vegas (though Gordon nor any other ECW representative attended), which would give the promotion added credibility as they grew. By September 18, 1993, the date of ECW’s first true “Supercard”, UltraClash ’93, Eddie Gilbert would be out of ECW with Paul Heyman slowly gaining more control thereafter.

If you’re worried about context with this one, don’t be. All previous editions of HCTV are currently available on the WWE Network for you to enjoy today!

As usual with the ECW archives here the bulk of the original music and entrance themes are replaced with canned music, something you should be aware of if you’re new to ECW on the Network.

The show opens with Stan Hansen cutting a promo about teaming with Terry Funk at the upcoming UltraClash ’93 event on September 18, 1993 to battle Eddie Gilbert and Abdullah the Butcher.

After the usual (overdubbed) open Jay Sulli, in the “ECW control room”, reminds us of UltraClash ’93 (with the correct date this week) and runs down the bulk of this week’s card before Eddie Gilbert crashes the set. For the next almost 10 minutes we get one goofy, corny joke after the next as Eddie Gilbert picks on Jay Sulli, who has the personality of a dead skunk, does his “best” John F. Kennedy, Howard Cosell, and Beavis impressions, calls out Jerry Lawler and explains what really happened in the quarter-finals of the ECW Tag Team title tournament where Gilbert and Dark Patriot advanced via reverse decision. 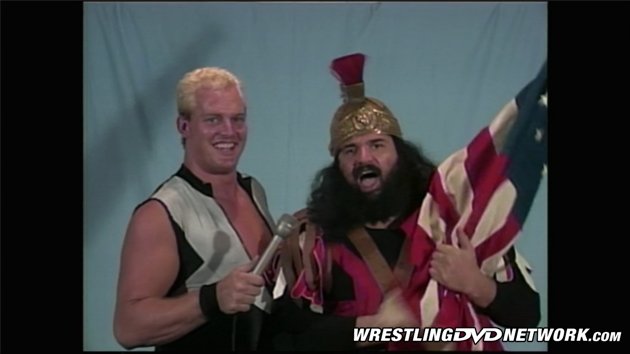 After a break Sandman and Sal Bellomo cut a promo about facing the Koloffs in the semi-finals. Bellomo takes over the promo and rants about fighting for the American flag as Sandman grins.

Next Ivan Koloff, with “nephew” Vladimir Koloff, talks about how prestigious the ECW Tag titles are and how dangerous Vladimir is. For those curious, the Tag Team title tournament was set to fill the vacancy left when Chris Candido, one half of the ECW Tag Team Champions The Suicide Blondes, left ECW for Jim Cornette’s Smoky Mountain Wrestling promotion. 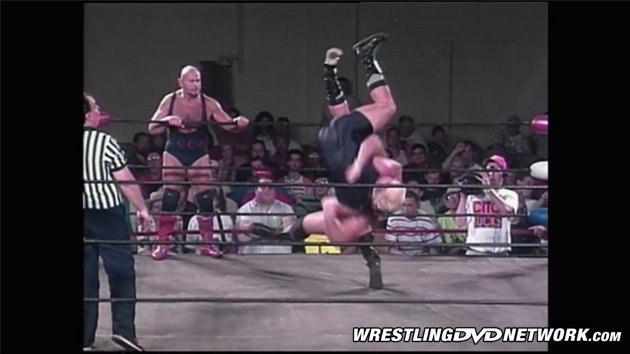 The future champion poultry farmer Vladimir Koloff (Carl Brantley) had been wrestling professionally for about three years by this point and doesn’t look too bad in this one. As for the match, it’s a basic tag match to say the least. In the end Vladimir hits a beautiful Belly-to-belly suplex on Sandman but the referee is busy trying to get “uncle” Ivan out of the ring. Bellomo takes off his boot and smashes Vladimir in the back, which allows Sandman to roll over and score the pinfall at 3:41 to advance to the finals of the ECW Tag Team title tournament.

After a break we join ECW President Tod Gordon in the ring. Gordon announces a “mixed gender” battle royal at UltraClash ’93. Gordon introduces Peaches, Hunter Q. Robbins III (to a chant of “K-Mart Suit!”), Terrible Tigra, “Big Busty” Angel, the flamboyant and “Fearless” Freddie Gilbert, and each cut a short promo about winning. “Sensational” Sherri Martel comes out last and the ring empties before she can step inside. Sherri wants to go and is ready to “kick some ass.” It looks like the segment is over when Freddie Gilbert returns with a dozen roses behind his back. A sign in the crowd reads, “Freddie Gilbert is Corey Feldman on Ico-Pro”, which is simply tremendous. Gilbert tells Sherri how great he thinks she is and starts handing over the roses when Angel returns and drags Gilbert out of the ring by his ear for making moves on another woman. Sherri says there’s not many men she’s ever run from and there’s “damn sure not a woman I’m ever gonna run from.” Sherri says she’s marking the days off on her calendar. “So come on Philadelphia,” Sherri says, “lets kick some ass!” 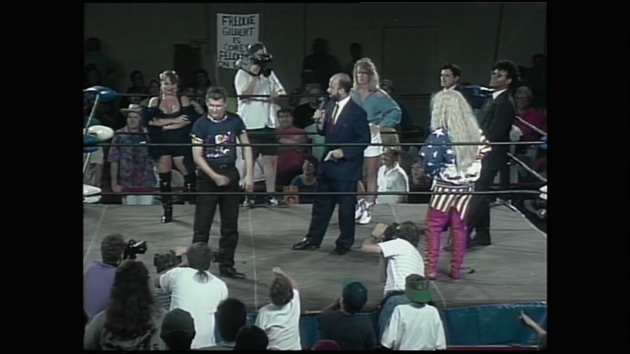 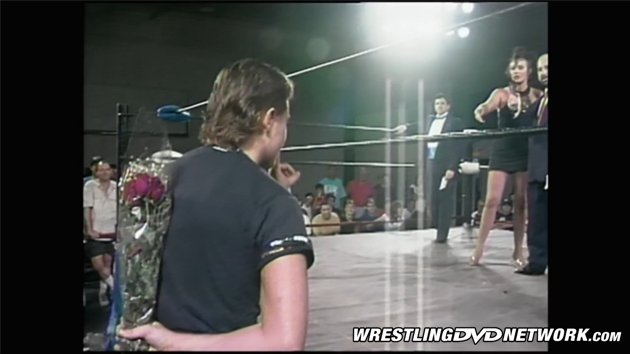 Before the next match can begin the screen fills with static and we’re back in the “ECW control room” with Jay Sulli and Eddie Gilbert. Gilbert says the match was boring just as a delivery man brings a box of Dunkin’ Donuts to Sulli, but the guy is a plant advertising Gilbert’s “King” T-shirt. 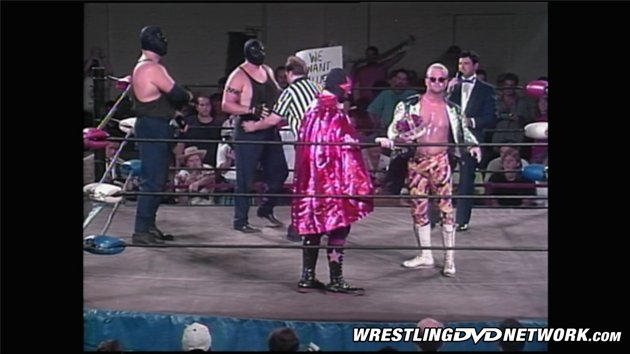 By the time we re-join the match it’s almost over. The Super Destroyers look to have the match won when Hunter Q. Robbins III comes to ringside and hands Destroyer #2 something which #2 stuffs in his mask. #2 then enters the ring and drops a headbutt on Super D #1 with the loaded mask and pulls “Hot Stuff” on top for the cover and the pin at 1:59. Everyone is speechless at the apparent heel turn. 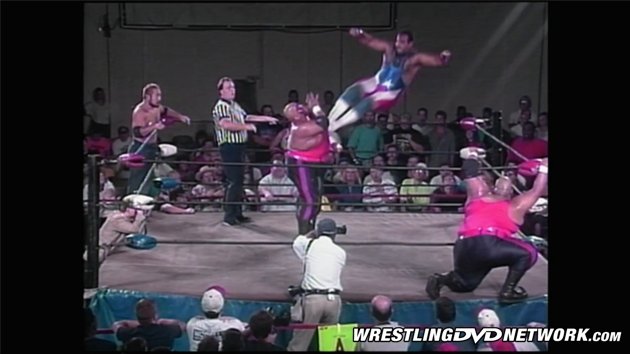 This one is a fight from the word go with the Headhunters taking it to Perez, Jr. and Matsunaga. The match turns when Perez, Jr. hits a mammoth superplex on Mofat and the match quickly breaks down. When Perez, Jr. misses a twisting senton Mofat takes advantage and lays out Perez, Jr. with a powerslam before nailing a beautiful, hellacious moonsault. In the scrum that follows Matsunaga rolls up Mohim in an inside cradle while Mofat covers Perez, Jr. for a double pin at 5:00. 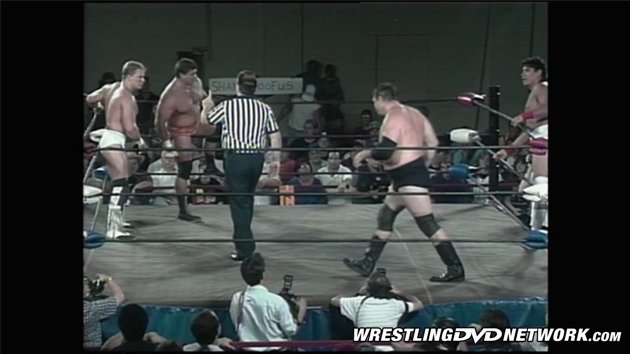 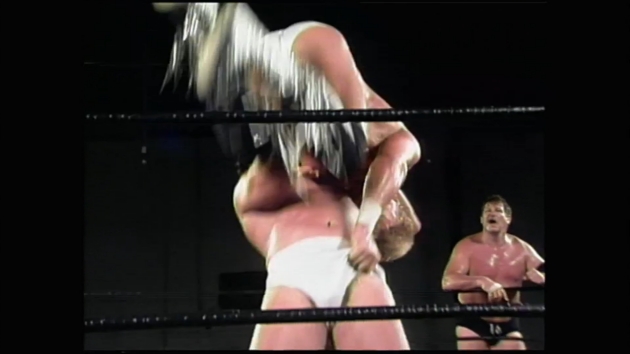 Tito is listed as the ECW Heavyweight Champion but this match was actually taped prior to Santana defeating Muraco for the title. As for the match, it’s not all that bad despite the stalling. Trouble is it gets cut off to show highlights of Abdullah the Butcher in Puerto Rico to help sell the “Texas Tornado Bunkhouse Match” at UltraClash ’93. We get back to the match with only a few minutes left in the show. Again, the action isn’t all that bad, I just wish we’d see more of it! All hell breaks loose when the top rope breaks. Eddie Gilbert, Jimmy Snuka, and Dark Patriot run to the ring and try to burn Hansen. Hansen ducks and the fireball hits Dark Patriot in the eyes. The bell rings and Tito Santana & Hansen pick up the win via DQ at 6:34.

The bell rings and the credits roll as confusion and chaos reign. Hansen clears the ring with his bullrope and stands victorious with Tito Santana to close out the show.

Aside from the goofy and nonsensical fluff this is a very solid early edition of ECW HCTV and a brilliant way to build towards UltraClash ’93.

Though it’s early days, the seeds of what made ECW so great in the years to come are on full display here. This was a fun 45 minute show to say the least. 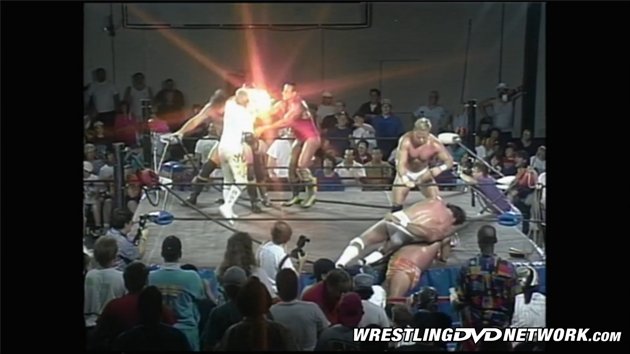 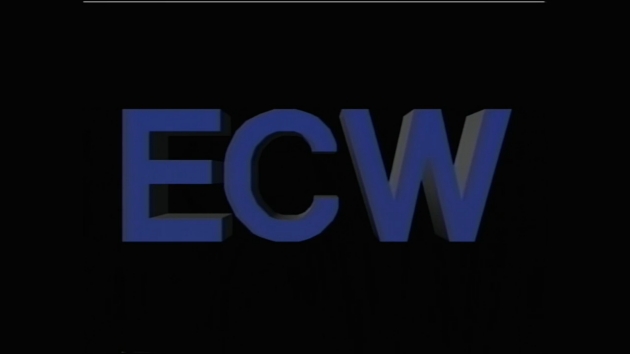 So, if you’re already subscribed to the WWE Network you can relive this classic dose of the original ECW or see it for the first time, right now! As always, let us know what you think in the comments.

Watch the ECW library, the upcoming No Mercy PPV, and over 8,000 more hours of content on the WWE Network. Your first month is FREE! Click here to subscribe to the WWE Network.