This week Throwback Thursday on WrestlingDVDNetwork.com goes “extreme” as we revisit a classic edition of Hardcore TV that aired, in some places, on this very day 19 years ago today, thanks (as always) to the WWE Network.

1997 was a landmark year for Extreme Championship Wrestling, arguably the most important year in the promotion’s history. Not only had the company produced their first Pay-Per-View, Barely Legal, but an “invasion” angle on the World Wrestling Federation’s flagship program Monday Night RAW brought ECW the kind of national notoriety it had been craving. It wasn’t all sunshine and lollipops, however, as 1997 spelled the end of the Tod Gordon era in ECW, as the founder left under a shroud of mystery during the infamous “mole” fiasco that still hangs over ECW to this day. 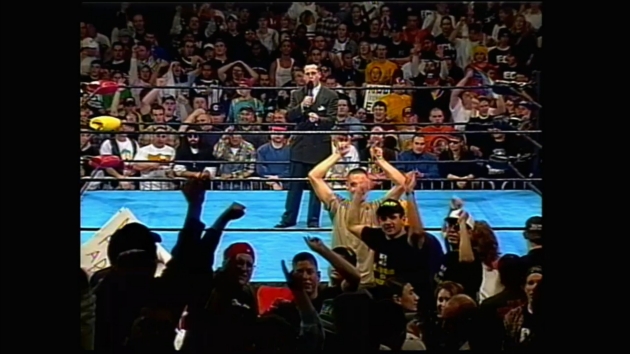 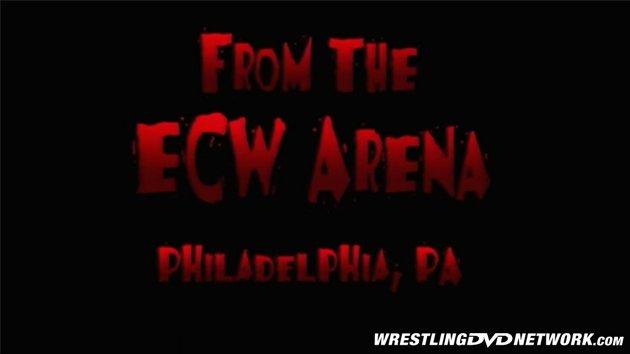 Context isn’t an issue here as all previous editions of Hardcore TV and previous three PPVs are currently available on the WWE Network.

This edition opens with Joey Styles in the ring welcoming us to the show. Styles begins by announcing that Kronus, one half of the Gangstanators with New Jack, suffered broken bones in both hands during a fight with the Dudley Boyz the previous night in Waltham, Massachusetts after Kronus and New Jack came to the ring to argue against the WWF’s Can-Am Express (Furnas & LaFon) getting the Tag Title match with the F.B.I, which the Can-Am Express won to claim the titles. 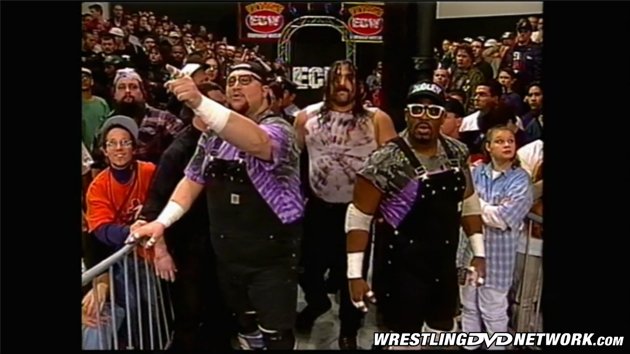 Styles calls Kronus to the ring for an interview but Kronus never gets a chance to speak as The Dudley’s hit the ring and attack Kronus. As Buh Buh prepares to smash Kronus’ broken hands with a chair New Jack makes the save, sparking an impromptu tag team match. 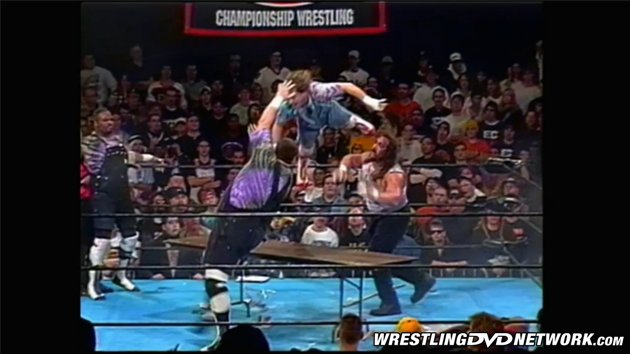 This is a just a flat out ECW war. As the Dudley’s start to work over New Jack, Spike Dudley hits the ring and makes it a true 6-man. New Jack and Spike get in their shots but the Dudley Boyz are too much. Big Dick launches Spike to Buh Buh for a kind of rocket launcher 3-D through a table but the spot doesn’t work as planned. Buh Buh picks up Spike and drives him through the table with a Buh Buh Bomb. After a stiff trash can to the face Buh Buh pins Spike at 5:17 with a foot on the throat.

After the match we get the normal ECW opening before going right to the ring for the next match. 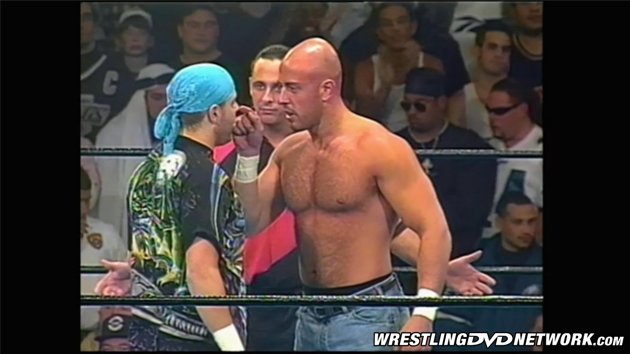 This was a rematch from November 2 Remember ’97, where these two had a solid (though poorly received) match with Whipwreck pulling off the improbable upset. The rematch is as much a fight as it is a wrestling match. Mikey sells like a champ, as usual, and Credible goes out of his way to make Whipwreck look like a real threat. When Mikey goes for the Avalanche Whipper-Snapper Jason interferes and gets a Whipper-Snapper for his troubles. Mikey then hits the Franken-Mikey on Credible for the win at 6:31 and another big upset, popping the ECW Arena.

Up next Joey Styles talks about ECW World Champion Shane Douglas having to have surgery on his right elbow after injuries sustained in Douglas’ title win over Bam Bam Bigelow at November 2 Remember ’99. To fill the gap, Styles explains, “Superstar” Stevie Richards has returned. Next we see the closing few minutes of the Stevie Richards/Chris Chetti match from December 6th where Richards hits the Stevie Kick for the pin.

After a break we see Al Snow arguing with Head about why he has to sit in the back of the car with all the junk, saying he’ll sit in the back so long as Head drives Snow “to the land of success”. The camera pans to the right and we see Head buckled in and driving the car! 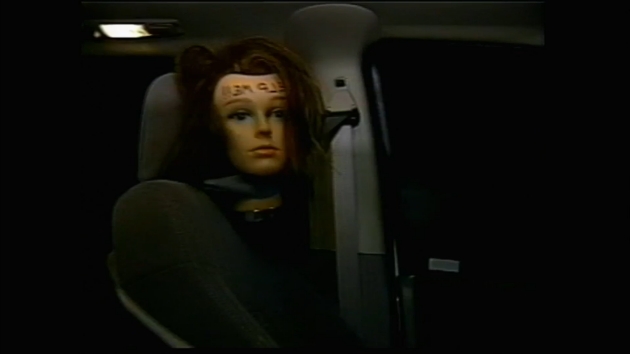 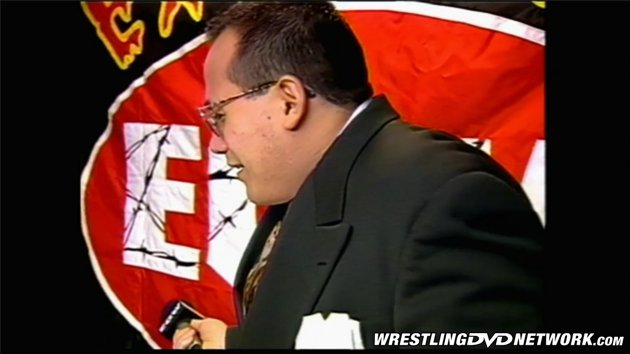 The new ECW World Tag Team Champions come out next with Lance Wright and Brakus, draped in a WWF flag. Lance Wright gets on the microphone and says that Fernas and LaFon will be taking the Tag Team titles to the WWF and throwing them in the trash on Monday Night RAW. After Brakus and Wright head to the back Axl Rotten and Balls Mahoney come out and tell the Can-Am Express that the only way they’re going to take the ECW Tag titles to the WWF is with steel chairs wrapped around their heads. Suddenly Chris Candido and Lance Storm (unofficial member of The Triple Threat) come out, with Francine on crutches.

Candido tells Furnas and LaFon that there’s no way they’re taking the title to the WWF and there’s no way that Axl and Balls are representing ECW because the Triple Threat runs ECW. Francine suggests a “Three-Way Dance”, leading us into our next match… 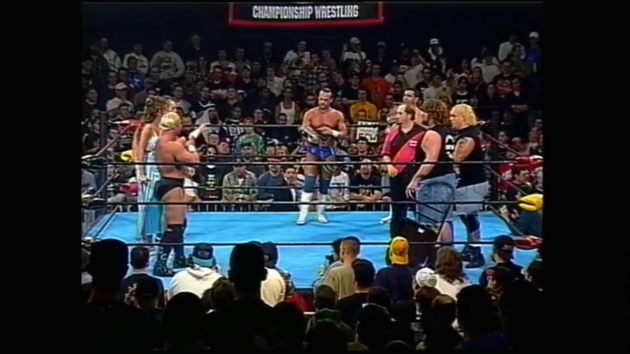 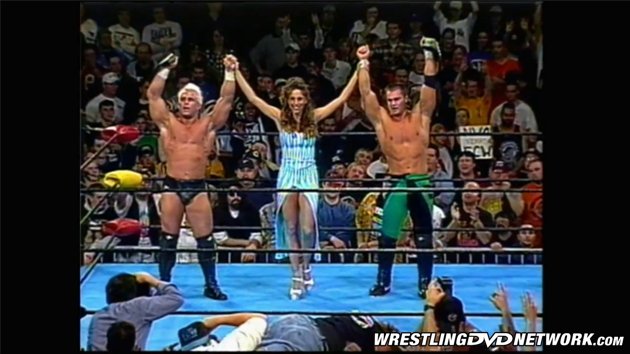 This one starts out as a brawl with guys getting turns in the ring to work one-on-one before turning into a tornado match with all six in the ring at the same time. When Doug Furnas lifts Balls Mahoney for a powerslam Axl dropkicks Balls on top of Furnas for the elimination at 4:54. The remainder of the match is a fight with momentum swinging back and forth. Francine interferes late, tossing a crutch to Candido, who smashes the crutch over Balls’ back. With Axl out of the picture momentarily Storm and Candido deliver a huge double superplex to Balls Mahoney for the win and ECW World Tag Team Championship at 9:32. This ended Furnas and LaFon’s one and only ECW Tag title reign at one day and marked Candido and Storm’s first and only ECW Tag title reign as a unit, though this marked Candido’s 3rd (and last) ECW Tag title reign.

After a break Brakus comes to the ring to confront Taz when security and wrestlers come out to hold Brakus back. Next Joey Styles talks about Rob Van Dam and Sabu facing off with Sandman and Tommy Dreamer and next week’s show emanating from Buffalo, New York. The show goes off the air with Dreamer and Sandman, with Beulah, making their way to the ring for the big showdown with RVD and Sabu in Philadelphia.

Whatever the twists and turns of the year, ECW looked to finish 1997 strong, and that’s just what they did. With the ECW/WWF “invasion” angle coming to an end and ECW on the verge of a national boom, this edition of ECW sees the hardcore promotion firing on all cylinders.

You can watch this HCTV right now if you’re already subscribed to the WWE Network. 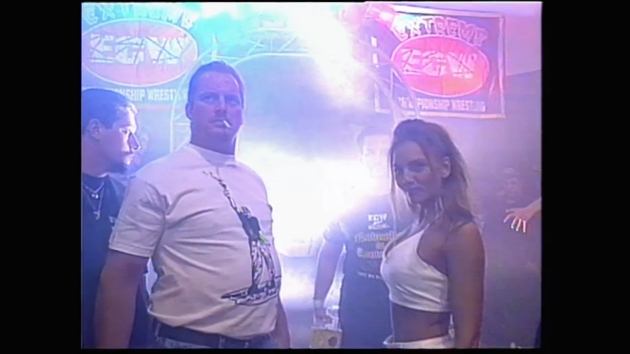 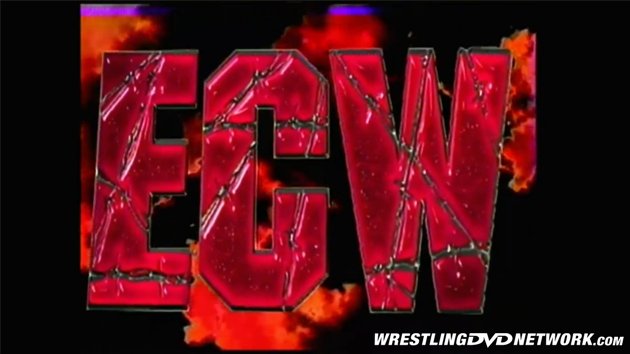 Go check it out and let us know what you think below. And for more great coverage on the award-winning WWE Network be sure to stop by the guys at WWENetworkNews.com.

Thanks for reading, and until next week, see ya at ringside!

Watch the ECW library, every WWE PPV (including Roadblock), and 6,000 more hours of content on WWE Network. Your first month is 100% FREE! Click here to subscribe to WWE Network.