15 years ago today, Dec. 3, 2000, Extreme Championship Wrestling put on their penultimate PPV event with Massacre on 34th Street from the Hammerstein Ballroom in New York City.

To mark the occasion Throwback Thursday on WrestlingDVDNetwork.com looks back at (you guessed it) ECW’s Massacre on 34th Street, as seen on the WWE Network.

ECW was nearing the end of a long, slow, painful demise. After losing ECW on TNN in September, ECW pulled back, cutting house shows and holding marathon TV tapings for their only source of exposure, Hardcore TV. Centered on tried and true ECW storylines, Massacre played it safe while still being able to entertain the ECW crowd. 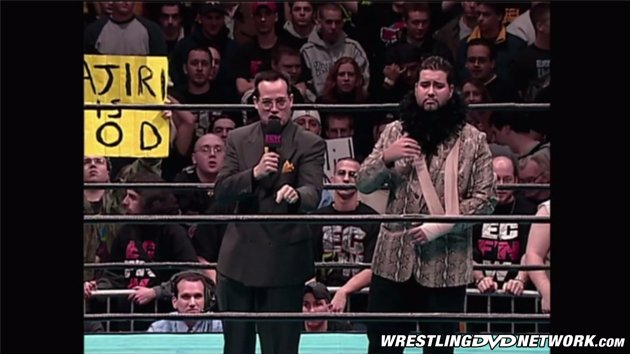 Context is frankly non-existent. The only prior programming available on the WWE Network is November 2 Remember 2000. All entrance music and some commentary has been overdubbed due to licensing issues, much to the chagrin of many “hardcore” fans.

After a fiery promo from ECW champ Steve Corino we get the usual comedic opening from Joey Styles and “quintessential stud muffin” Joel Gertner.

Before the match begins Dawn Marie offers her “services” to the winning team. This is a decent, fast-paced opener. Joey Matthews hits a top rope hurricanrana on Swinger before York connects with the “rebel yelp” for the pin at 5:38. After the match Dawn Marie swerves York & Matthews and joins Diamond & Swinger. Gertner leaves the broadcast position to tend to an injured Matthews.

Next Danny Doring and Roadkill talk about their upcoming tag title match, as Cyrus joins Joey Styles on commentary. 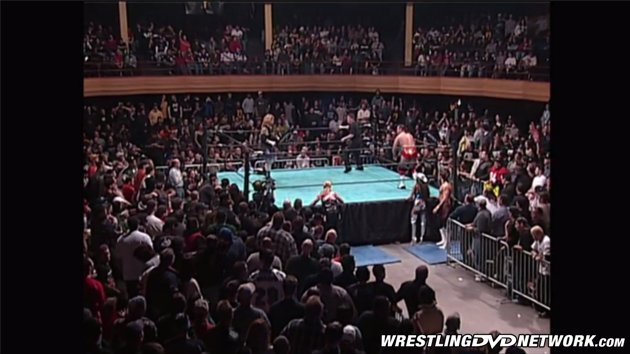 Another fast-paced match sees Balls and Money put on a pretty good show before interference costs Mahoney the match. With the referee distracted Balls gets blasted by Dinero’s leaping neck breaker and Hammrick’s “confederate munch” before being finished off by Money’s picture-perfect moonsault for the 1-2-3 at 7:53.

After the match Mahoney is triple-teamed until Nova makes the save to start the next match.

After a decent back and forth match Balls Mahoney destroys Hammrick and Money with the PPV adorned steel chair before warping the chair on Dinero’s head. Seconds later Nova connects with a swanton bomb for the pin at 5:58.

After replays Rhino cuts a scathing promo about the upcoming title match with Spike Dudley. 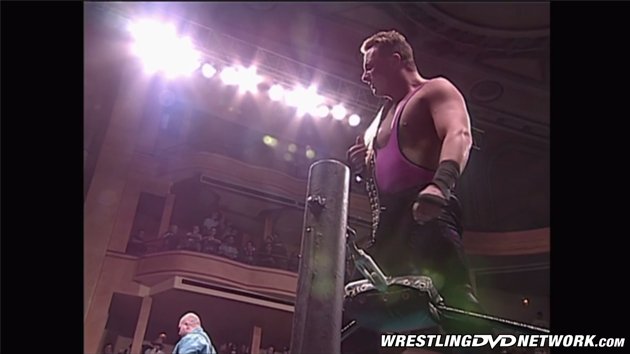 The story here was Doring and Roadkill agreeing to split up forever if they failed to win the tag titles on this night. This is a short but above average ECW PPV tag title match. After Mamaluke takes a hellacious bump into the front row Doring & Roadkill connect with the “buggy bang” for the 1-2-3 at 9:13 to win their first and only ECW Tag Team titles in what turned out to be the final tag team title change in company history.

After replays Spike Dudley talks about the upcoming TV title match with Rhino.

This one, as Joey Styles says, is “a good old fashioned pro wrestling grudge match.” This is one of the few psychologically driven matches on the card. The match features a Louie E./Paul Heyman confrontation that pops the crowd and spells the end to two ancient cellular phones. Dreamer inverts a table in the corner with the table legs pulled out and lifts Anderson for a Spicoli driver when Anderson reverses into a brutal spinebuster for the pin at 16:47.

After replays we get a short, macabre promo from Sinister Minister with Tajiri and Mikey Whipwreck. 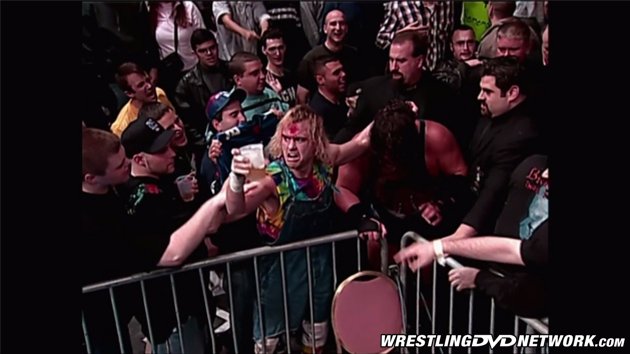 This is nothing short of a death match. Spike tapes Rhino’s left ankle to the bottom rope and is about to break Rhino’s leg when the “Man Beast” grabs Spike in a modified rear naked choke for the choke-out win at 9:51 to retain the TV title. A lifeless Spike, left in a pile of vomit, is battered by Rhino before the “Man Beast” drives referee Mike Kehner through a table and calling it a night. This marked the final time the ECW TV title would be defended on PPV.

Next, Steve Corino and Jack Victory are approached by Francine for a pre-match “warm-up”. Corino declines (“Well, I would but I just kinda, ya know, took care of myself, but – um…”), but Victory accepts and the two disappear into an adjacent room. Corino is then wiped out by Justin Credible while Francine leaves Victory screaming in agony.

On the Nov. 19, 2000 edition of Hardcore TV Super Crazy teamed with The Unholy Alliance, costing them a match with Hot Commodity. During the Tajiri/Crazy match that followed Whipwreck turned on Crazy, setting up this match. This one is a high-flying, hard-hitting ECW war. In the end, with Kash and Mikey wiped out, Tajiri lands the double stomp from the top through a table to Super Crazy below, buried in chairs, for the 1-2-3 at 18:24. 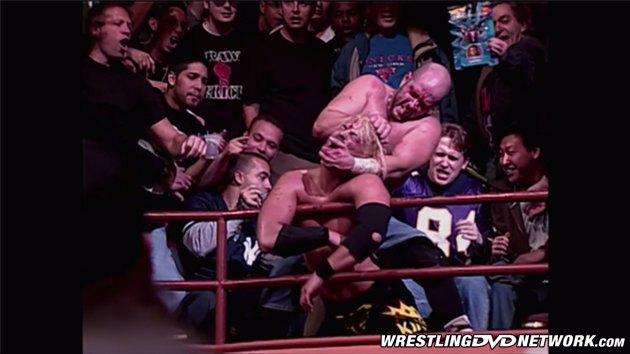 Though the story here goes back to the controversial “Double Jeopardy Match” at N2R 2000 where Corino won the ECW title from Lynn, this one is all about Corino and Sandman. This is a rapid-fire match with all three men working together until Credible takes out Lynn with the tombstone piledriver at 8:59. Corino and Credible continue to brawl through the arena before finishing it in the ring. Credible Irish whips Corino into a ladder and charges in but Corino moves and hits the “old school expulsion” for the 1-2-3 at 20:07 to retain the ECW title. As Corino recovers Sandman’s “music” hits. Moments later Sandman destroys Corino with the Singapore cane before stealing the ECW title as the PPV goes off the air.

Though nothing seemed to be going right, ECW pulled a rabbit out of the hat this night. It may not be a classic PPV but Massacre remains to be an exciting, action packed event. Sadly, ECW would run only seven more cards after this event before the final show on Jan. 13, 2001 in Pine Bluff, Arkansas. Though it was the end, Massacre is an example of what made ECW so great while exposing all the faults that forever held the beloved promotion back. 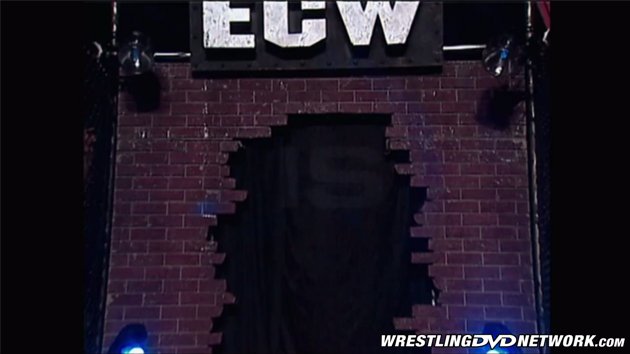 That’s all for this week’s TBT on WDN – cheers for reading! Are you a WWE Network subscriber? If so, check out ECW Massacre on 34th Street and let us know what you think below.