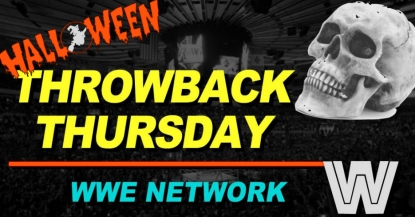 Conjuring up thoughts of goblins and ghouls, tricks and treats, Halloween is the season of fright and terror. Though Dracula, Michael Myers and Jason Voorhees are nowhere to be found on the WWE Network, horror and abomination is abound. 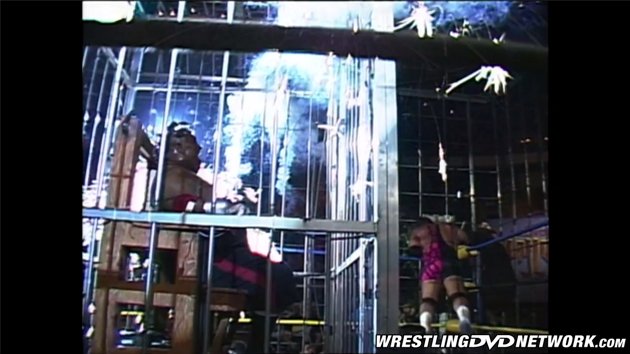 This week Throwback Thursday on WrestlingDVDNetwork.com looks at some of the most “horror-ible” matches on the WWE Network. So break out the candy, settle into your favorite chair, turn out the lights, and try not to scream as some of wrestling’s scariest, ungodly matches come your way courtesy of WWE Network.

For every Starrcade or “WarGames” Dusty Rhodes created there was a “Chamber of Horrors”. The concept was supposedly simple. Two teams would do battle in a “Thunderdome Cage” in the middle of which a “Chair of Torture” would descend. To win a wrestler needed to be placed into the chair and the “switch” pulled, “electrocuting” the unlucky victim. From last minute substitutions to the switch not staying up (not to mention a lack of space thanks to the chair) to the presence of the sorriest looking “ghouls” in wrestling history, the “Chamber of Horrors” was a train-wreck from the start that ended with Abdullah’s “electrocution” and the ring catching fire. 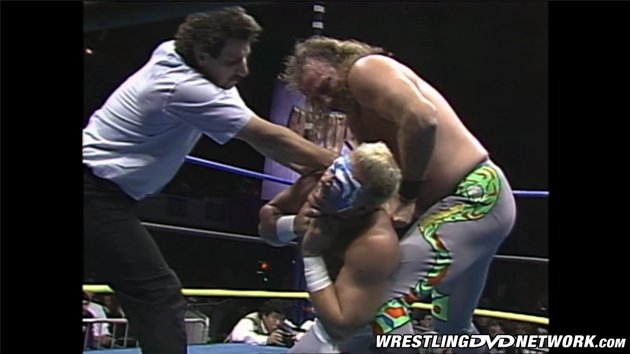 Thanks to terrible mini-movies and a plodding story Jake Roberts debut angle in WCW with Sting was a disaster that was left for dead at Havoc ’92. With options like “Barbed Wire”, “Texas Death”, and “First Blood” (among others), and with each man having signed waivers, “Coal Miner’s Glove” was a letdown of biblical proportions. Between the duct-taped glove, the boring gimmick, and a dead crowd this was the worst WCW PPV main event to date. For the record Jake’s snake at the end was real, it was just as disinterested in the match as the rest of the fans.

This mobile “Cage” match is as infamous for what happened off TV as on. Pre-taped near Atlanta a whole 5 days prior to the live PPV, Rhodes and Bully (Barry Darsow) were fired by Eric Bischoff for flouting the “no blood” policy while Mike Graham, the producer (who not only okayed the blading but provided the tools), was sacked as well, all three before the match even made air. The match was edited so severely to remove blood that a decent match to start with, by all accounts, became utterly unwatchable. While Rhodes would land on his feet in the WWF as Goldust, Barry Darsow, like many of the fans who viewed this horror, never quite recovered from the fiasco that was the “King of the Road”. 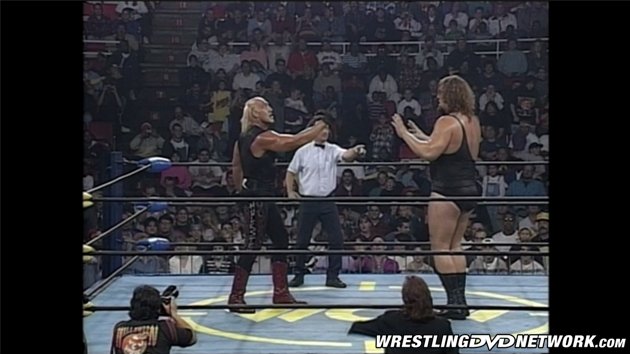 Say “The Yet-ay” to any wrestling fan and they will know immediately what match you’re talking about. After a “Sumo Monster Truck Race” ended with The Giant falling to his apparent death in the Detroit River Hogan, possessed by the “Dark Side” of Hulkamania, was met by a bone-dry, alive, well-rested Giant. After Jimmy Hart and Lex Luger turned on Hogan, costing the Hulkster the WCW World title, the dreaded, terrifying, ghastly “Yeti” (Ron Reis) debuted. While in the clutches of The Giant, Hogan was finished off by the Yeti with an epic dry-humping for the ages. This calamity was only the first steps toward something far more evil… DOOMSDAY!

This is one of the worst matches of the PPV era. From rules no one could quite comprehend to a three-tiered, four chamber cage that no one could quite make sense of, in a ring three-quarters of the arena couldn’t see, “Doomsday” was the last stand for babyface Hogan until 1999. Just when fans thought WWF-lite had reached its zenith in WCW in comes Zeus as “Z-Gangsta” and Robert Swenson as “The Ultimate Solution”, a name no one in WCW seemed to notice resembled the Nazi’s “Final Solution”. In the end Luger botches the finish and Savage nearly forgets to make the pin on Flair who had already been eliminated, but what the hell. This match was so bad none of it was ever shown on TV and was barely mentioned as ever happening. If this one doesn’t scare the bejabbers out of you, no match will. 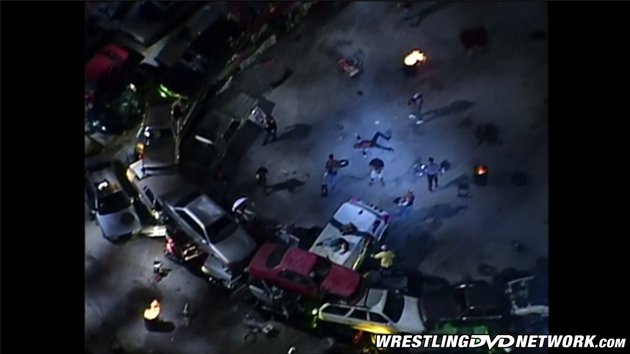 Though the entire BATB ’99 card could qualify as horrifically bad this “Hardcore Invitational” is the worst offender of the night. Hak challenged any WCW wrestler who had the guts to show up at the junkyard to a fight, making the “Invitational” not so invitational. The match was a who’s who of mid-card talent and below. With no real rules and spots as staged as Cats this junkyard brawl was, in an era of pointless matches in WCW, the most pointless of them all, helping no one while injuring many.

If there was ever a time when the WWF jumped the shark in the “Attitude Era” this match may be it. While the angle produced laughs at home thanks to the stellar work of Lawler and JR the live audience hated it. As politically incorrect now as anything from the “Attitude Era” this match, when the laughs die down, is nothing short of an abomination full of inside jokes and absolutely no story. From toilet paper and teddy bears as weapons to Patterson rubbing a “feminine napkin” in Brisco’s face this is, hands down, one of the worst WWF/E PPV matches ever. 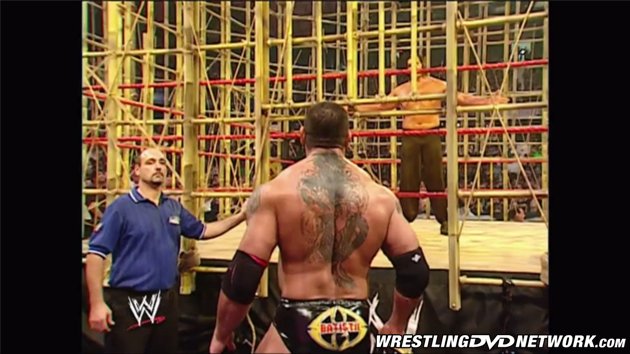 Though the first “Punjabi Prison Match” wasn’t a classic it wasn’t terrible either. The second, and thus far (thankfully) final, “Punjabi Prison Match” between Batista and The Great Khali was a train-wreck on paper that became a living nightmare. Batista, never a great Cage Match wrestler, tried his best to carry Khali, known to be great at exactly nothing, in a match virtually no one cared to see, but to no avail. With all of the ridiculousness of the first “Prison Match” and exactly none of the brutality this match was one of the biggest World title flops in WWE history. If this match doesn’t run a chill up your spine nothing will. I would imagine a week in Oz (the prison, not the land) as being far more enjoyable than re-watching this match.

These are only eight of the most “horror-ible” matches on the WWE Network. Like skeletons in the closet there are more terrible matches on the Network than any one fan could count. These matches, like the zombies of the season, will never die thanks to the Network. In this season of spooks and scares we hope you enjoyed this fun look back at some of the “scariest” matches streaming now. So enjoy the candy, enjoy the scares, and save some Smarties for me! 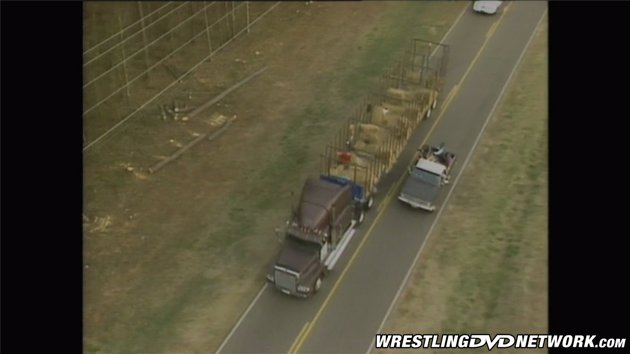 That’s a wrap on this special Halloween edition of TBT on WDN – thanks for reading! Are you a WWE Network subscriber? Then check out the matches, see them for yourself (if you dare), and let us know what you think. From everyone here, have a safe, fun, and happy Halloween. 😈