Throwback Thursday: WWF In Your House 13: Final Four, As Seen on WWE Network

The road to WrestleMania is upon us once again!

In preparation for the big event Throwback Thursday on WrestlingDVDNetwork.com is looking back at some of WWE’s most memorable pre-WrestleMania shows (as seen on the WWE Network, naturally), starting with one of the best of the 16 original In Your House events: Final Four. 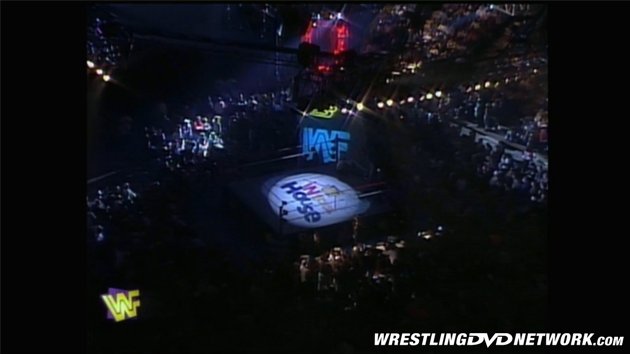 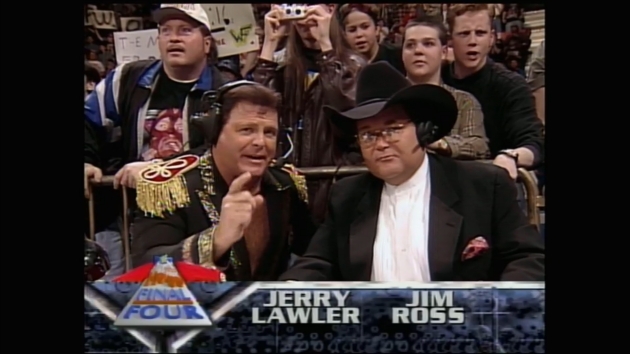 With WrestleMania 13 a mere 5 weeks away the WWF was shaken to its core when then-WWF World Champion Shawn Michaels, citing a “career-threatening” knee injury (and a lost smile) relinquished the World title, marking only the third (official) time that the WWF World title was left vacant. To make matters worse, WCW was eating the Federation’s lunch in the ratings, beating RAW 33 straight weeks leading into Final Four.

Disinterest in the WWF product was nearing an all-time high, with WrestleMania 13 drawing the lowest buyrate of any WrestleMania in history. By nearly any measure the World Wrestling Federation was in serious trouble. But, as this event illustrates, the future was young, bright, and hungry. The WWF was far from dead, despite what Eric Bischoff may have thought.

In respect to context surrounding this one, all previous PPVs and all previous editions of RAW are currently available to watch on the Network.

Final Four opens with a video package highlighting the WWF World title and the four men (Vader, Bret Hart, Undertaker, and Stone Cold Steve Austin) fighting in the anything-goes main event to fill the vacancy left from Shawn Michaels relinquishing the title (and his smile). In the arena JR and Lawler welcome us to the show as Marc Mero and Sable make their way to the ring. 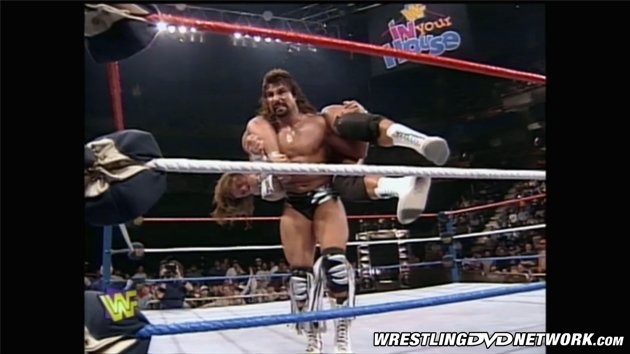 This is an old-school WWF show opener that, with no back story, was designed to simply prime the crowd. That said, this isn’t that bad of a match. Featuring some good psychology and action this is far from a one-sided squash. Cassidy (Al Snow), a few weeks shy of a year in the WWF, looks just as good as Mero in this match (if not better). The match turns when Cassidy goes after Sable for helping Mero escape the figure-four leg lock. Mero hits Cassidy with a plancha and proceeds to beat the bejabbers out of Cassidy before connecting with the Wild Thing (shooting star press) for the pin at 9:31.

As Honky Tonk Man makes his way to the ring we see a replay of Shawn Michaels’ speech from Thursday RAW Thursday Live in which he relinquishes the WWF World title to then-WWF President Gorilla Monsoon, telling the world he’s lost his smile. He doesn’t care if it’s not popular, he’s lost his smile, people! Next we see the clip of Gorilla Monsoon announcing the winner of the “Final Four” match would be declared the new WWF World Heavyweight Champion. 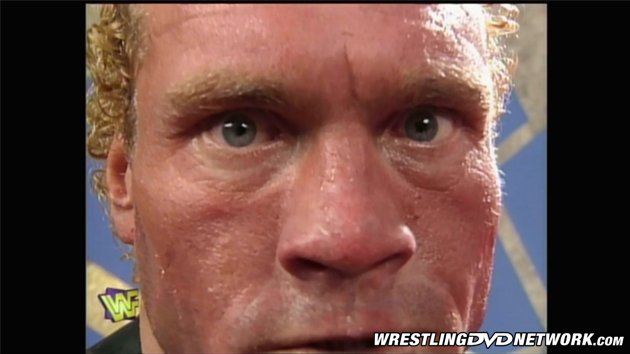 Kelly then interviews Sid, who faces the new WWF Champion the next night on RAW. Sid says it’s time for him to get back what’s his.

As the next match comes to the ring we see footage of the Nation of Domination taking out Bart Gunn and Goldust in separate attacks two weeks apart.

A set-up for the upcoming six-man “Chicago street fight” at WrestleMania 13, this one starts out as all babyfaces until the Nation isolates Flash Funk and the match turns in favor of the heels. Funk makes a hot tag to Bart Gunn who takes it to Faarooq. Soon enough the other four men are in the ring fighting. In the commotion Bart Gunn hits the top rope bulldog on Faarooq and makes the cover. With the referee still distracted Crush runs in and drops a big leg drop on the back of Gunn’s head, allowing Faarooq to pick up the win at 6:43.

Backstage Dok Hendrix interviews Stone Cold Steve Austin about the main event. Hendrix says Austin doesn’t have any clear-cut victories over Vader, Undertaker, or Bret Hart but Austin says he beat all of them in the “Royal Rumble”. Austin says it’s all part of the conspiracy that has kept him down and that he will win the “Final Four” and be the WWF World Heavyweight Champion. 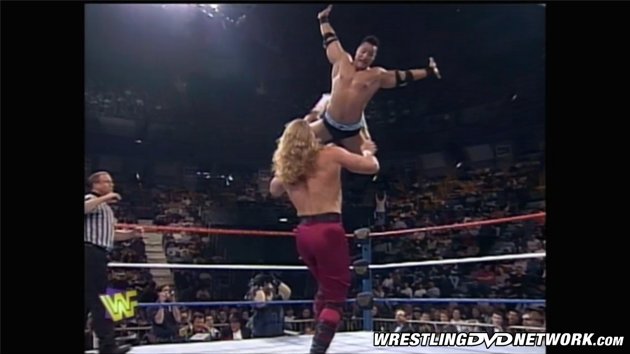 After serving hard time for the “Curtain Call Incident” of May 19, 1996, Hunter Hearst Helmsley was finally a free man. While Rocky Maivia was being groomed (unsuccessfully) as the next top babyface in the WWF, Helmsley was preparing for a “King of the Ring” tournament victory and a run as one of the company’s key heels as part of D-Generation X.

The match, as much a fight as a wrestling contest, features some solid psychology and action, though it isn’t quite as good as their previous meeting. Most of this one belongs to Helmsley, who repeats many of the same “mistakes” from Thursday RAW Thursday Live, which continually leaves openings for Maivia. Goldust comes to the ring to distract Helmsley, smacking his golden bum in “The Connecticut Blue Blood’s” general direction. Maivia takes advantage, hitting a pretty back suplex with a bridge for the win at 12:30 to retain the Intercontinental Championship.

Afterwards Marlena joins Goldust at ringside. Before Goldust and Helmsley can fight, an unknown woman (the debuting Chyna) grabs Marlena around the neck from the first row. Security removes the woman as Goldust tends to Marlena, carrying his wife to the back. 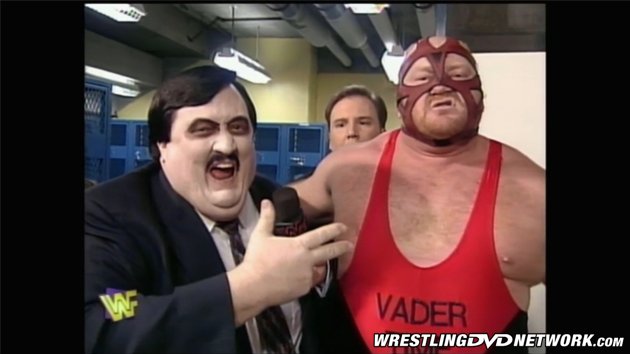 After a WrestleMania 13 promo Kevin Kelly interviews Vader and Paul Bearer about the main event to come. Vader calls out the other wrestlers while Paul Bearer says Vader has already destroyed the other men in the match and that Vader will be the new WWF Champion.

The story going into this one had little to do with the contenders and more to do with the continued problems between Davey Boy and Owen Hart. This is a solid wrestling match featuring some great tag team psychology. Owen and Davey Boy start to fight partway through the match giving Furnas and LaFon the chance to string some big offensive moves together, including a beautiful super kick-clothesline-DDT-leg drop combo on Owen, who comes back with a crushing enziguri. Eventually Bulldog blocks a Furnas monkey flip into a snake eyes. When Bulldog lifts Furnas for the running powerslam Owen reenters the ring and smashes his Slammy over the back of LaFon, giving the challengers the win via DQ at 10:29.

After the match Bulldog chastises Owen for causing the DQ and the two argue. Owen tells Bulldog it doesn’t matter, “We’ve still got our belts.” Bulldog tosses down his Tag Team title as he continues to yell at Owen before grabbing the Slammy from Owen and tossing it to the mat, separating the topper from the base. The two calm down and seemingly forgive one another before leaving the ring. But not before Owen glares at Bulldog, “Don’t f*ck with my Slammy.” 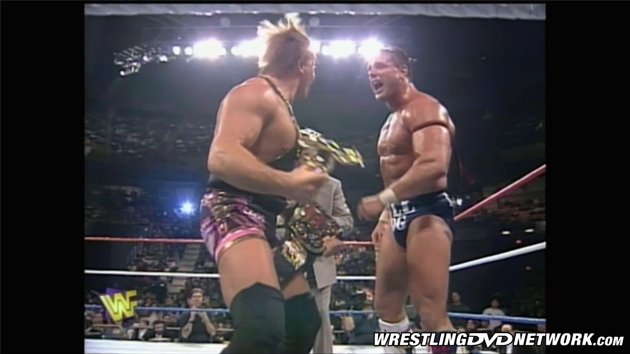 Backstage Dok Hendrix interviews The Undertaker regarding the forthcoming “Final Four” match. Undertaker says he’s recovered much of his old edge and that he’s not far away from being the same force that once dominated the Federation in early-’90s. “This spells doom,” Undertaker says, “for one Vader, for one Stone Cold Steve Austin, and yes, even the ‘Hitman’.”

Next we see footage from the 1997 Royal Rumble of Steve Austin being eliminated from the “Royal Rumble”, reentering the match, and going on to win.

Vader, Stone Cold, and Undertaker come to the ring before Kevin Kelly interviews Bret Hart about the impending main event. Bret says that nothing can stop him from winning, that while the other three guys are tough he has experience and heart. “The way I look at it,” Bret says, “may the best man win – me.” 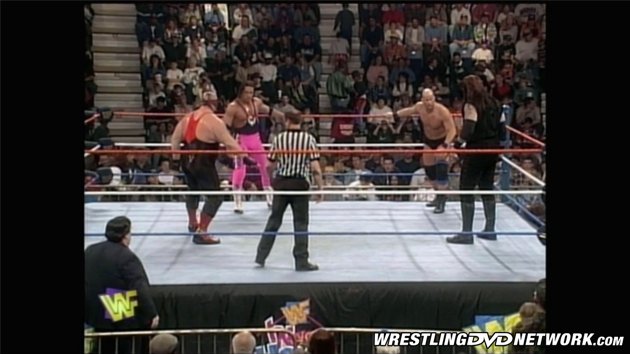 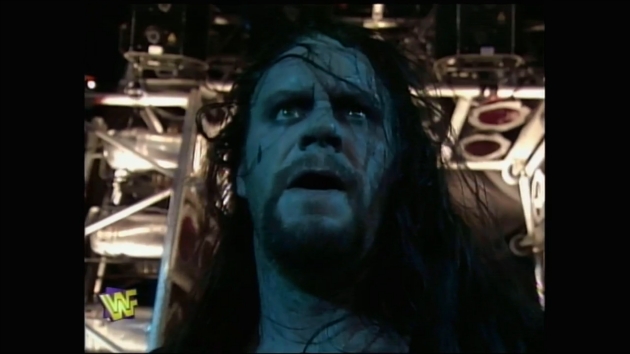 The “Final Four” is a brawl from the start. Vader tries to hit Undertaker with a steel chair on the outside but gets the chair kicked back in his own face, opening up a nasty cut right above Vader’s left eye. For the next 18 minutes this match is nothing short of a war. The rules such as they are allows for three distinct one-on-one matches in and out of the ring. Austin, who came into the match with an injured left knee and a serious stomach illness, is the first to be eliminated over the top rope by Bret Hart at 18:09. Austin returns in a few minutes to beat up Bret Hart on the outside of the ring. Vader goes up for a Vader Bomb on Undertaker who sits up, hits Vader with a low blow, and eliminates the “Rocky Mountain Monster” over the top at 22:32, leaving just Bret Hart and The Undertaker. Undertaker looks about to win with a tombstone piledriver when Austin again interferes. Both men go after Austin when Hart steps back and clotheslines Undertaker over the top rope at 24:04 to win his 4th WWF World Heavyweight Championship.

After the match we see a WrestleMania 13 promo before going back to the ring where Bret continues to celebrate. Suddenly Sycho Sid’s music hits and Sid makes his way to the ring to stare Bret down ahead of their showdown the next night on Monday Night RAW.

While there were a couple of better complete shows (Canadian Stampede, for example), In Your House 13 ranks as one of the very best of the original 16 two-hour IYH events.

Featuring a solid opener, Intercontinental and Tag Team title matches, and an all-time classic WWF World title match, this one is mandatory viewing for anyone who calls themselves a WWE fan. 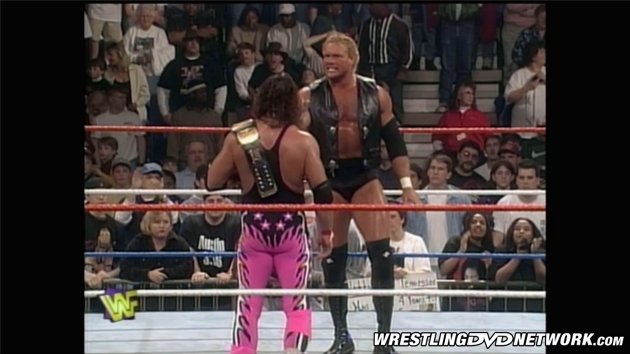 You can check out In Your House 13: Final Four right now if you’re subscribed to WWE Network. And don’t forget to let us know what you think in the comments below.