Throwback Thursday: WWF In Your House 16: Canadian Stampede, As Seen on WWE Network

This week Throwback Thursday celebrates the 20th anniversary of one of WWF/E’s greatest events: In Your House 16: Canadian Stampede, as seen on the WWE Network.

As was documented last month in TBT’s look back at the 1997 King of the Ring, the WWF was in the early stages of their remarkable comeback against World Championship Wrestling. After a slew of either unremarkable or simply so-so PPV events, the WWF was beginning to find its footing that, with the start of this event, would embark on one of the great runs in company history that produced some of the best television and Pay-Per-Views in company history.

This would mark the final 2-hour IYH event. Starting in September with Ground Zero: In Your House 17 all monthly WWF PPVs would be 3-hours in length. 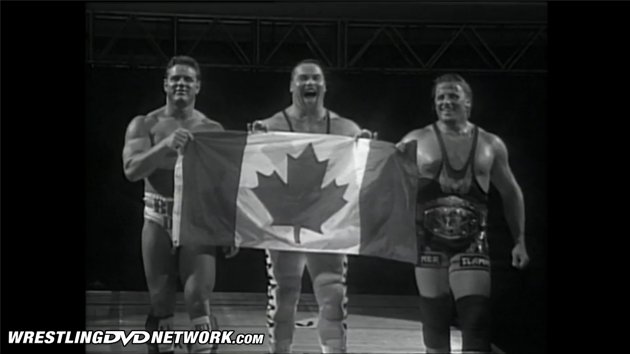 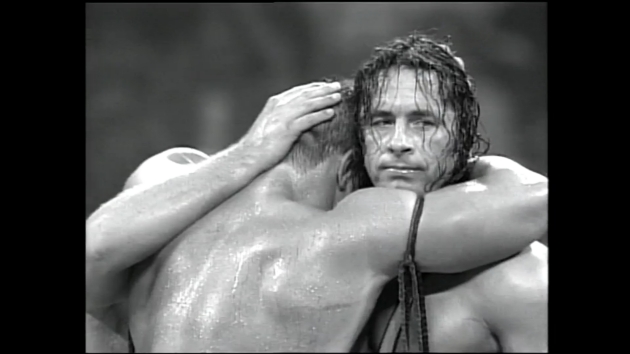 What’s important to note about this particular event is that it marked the last truly great moment for the Hart family in professional wrestling. The Hart family, in and out of the ring, would never be the same in the wake of Bret’s falling out with the WWF in November ’97.

For those worried about context, don’t be. All previous editions of Monday Night RAW as well as all prior PPVs are currently available on the Network for you to enjoy right now.

The show opens with a great vignette highlighting the 10-man tag that talks about black and white fading to a “canvas of muted grays where good is indistinguishable from evil and renegades receive a heroes embrace.” 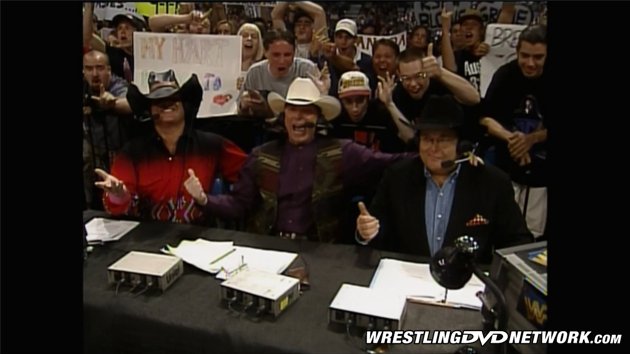 The pyro goes off and Vince McMahon welcomes us to the show. McMahon and Jim Ross are wearing traditional cowboy hats while Jerry Lawler is wearing a hilariously over-sized cowboy hat and calling himself the “king of the cowboys”. McMahon and JR talk about the upcoming Sasuke/Michinoku match while McMahon and Lawler discuss the opening match between Helmsley and Mankind.

As Helmsley makes his way to the ring we see a vignette spotlighting the Mankind/Helmsley feud, particularly Helmsley defeating Mankind to win the 1997 King of the Ring tournament. 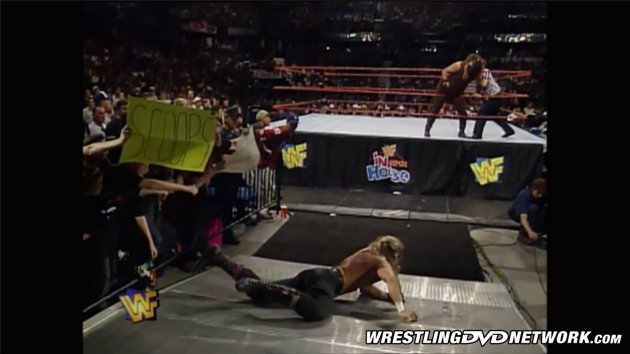 Despite the braided hair and Greenwich gimmick, the transition from “Hunter Hearst Helmsley” to Triple H was in full swing. This one is a battle from the opening bell featuring a number of memorable spots and psychology that is everything their King of the Ring showdown wasn’t. Late in the match Mankind makes his comeback and the match spills to the outside where Chyna interferes. Helmsley and Mankind fight around the ring and eventually into the crowd where they are counted out at 13:10. After the bell the two continue to brawl in the crowd as officials try and separate them. The fight after the match is nearly as fun as the fight during the match.

Next we get a video highlights of the 1997 Calgary Stampede festivities, narrated by Dok Hendrix, including fans lining up for a mile for a Bret Hart autograph signing. 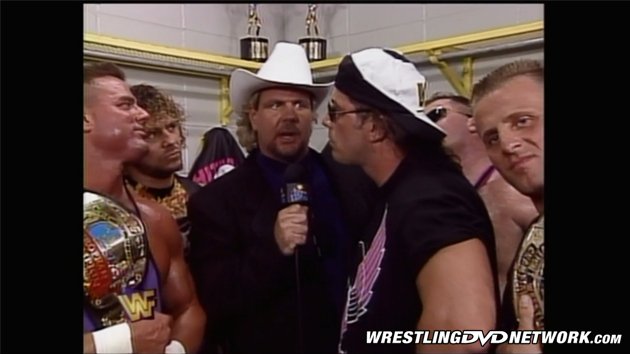 In the back Dok Hendrix begins to interview Bret Hart and the rest of the Hart Foundation about the upcoming main event 10-man tag when Stone Cold Steve Austin, held back by officials, tries to get to Bret. Bret says they could have jumped Austin and ended it right then and there but they don’t want 5-on-1 they want 5-on-5.

Before the next match can even start a bloodied Hunter Hearst Helmsley and Mankind break through a barricade and are fighting in the arena again. Eventually the two brawl back from where they came. 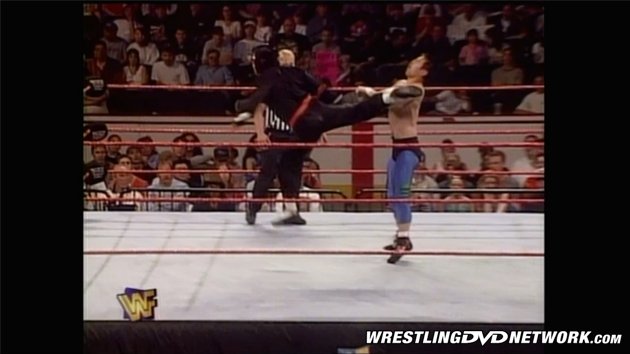 This match marked the debut of both men in the WWF. Originally the new Light Heavyweight division was to be built around Great Sasuke but, between the reaction Taka received and Sasuke’s bragging about only defending the title in Japan (as well as refusing to drop the title on WWF TV), the WWF decided to go with Michinoku instead. The match is decent enough but it feels like these two put on the kind of match they thought WWF wanted to see rather than truly showing what they could do. The two would put on a much better match the next night on RAW, Sasuke’s final WWF televised match, that despite the numerous flubs still stands as one of the divisions best matches. This one comes to an end after Sasuke hits Taka with the Thunder Fire Powerbomb followed by a Tiger Suplex for the pin at 10:00.

The cameras suddenly go to the back where Mankind and a bloody Hunter Hearst Helmsley are brawling outside the Saddledome. Helmsley breaks a shovel over Mankind’s back before attempting to Pedigree Mankind on a stack of skids. Mankind makes a comeback and continues to beat on Helmsley until WWF officials, for the moment, break up the fight. 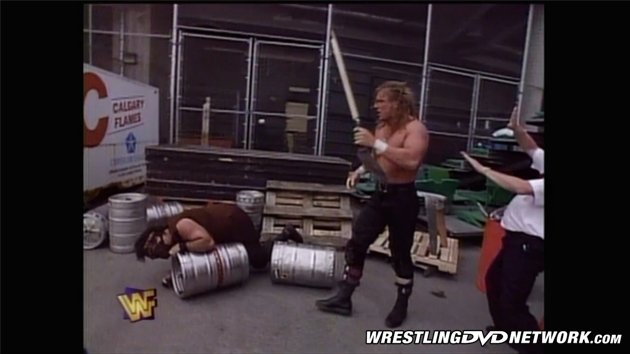 Up next we see footage from the June 23rd edition of RAW where the debuting Disciples of Apocalypse brawled with the Nation of Domination, during which Ahmed Johnson suffered a knee injury, forcing Vader to replace Johnson.

Backstage Dok Hendrix interviews Vader and Paul Bearer. Hendrix asks Bearer how he can look himself in the mirror after accusing The Undertaker of murder. “Dok Hendrix,” Bearer responds, “looking in the mirror is the best thing that I do every morning, if you know what I mean.” Bearer again calls Undertaker a murderer and says it going to be “deja vu” when the Vader defeats Undertaker as he did in January at the Royal Rumble. 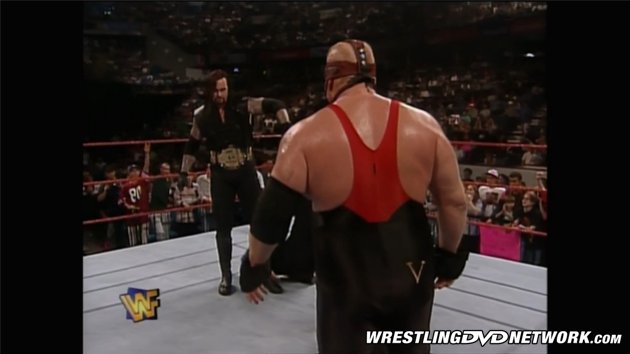 As J.R. says, “This in not gonna be a Brisco/Funk classic, this is gonna be nothin’ but a fight.” Vader had a hard time finding guys to work with where he could be “Vader” and not a “Sports Entertainment” replica, but Undertaker was one of those men. Whenever I see a Vader/Undertaker match I wonder what could have been had these two been able to really cut loose. Just when the match gets intense or interesting Paul Bearer, shouting “murderer” and hitting Undertaker with his shoe (“I tell ya what,” J.R. says “if the heel doesn’t get him the smell will!”), gets involved and stunts the momentum. Despite the outside shenanigans, Vader looks like a million bucks in this one while Undertaker proves yet again why he was one of the very best psychologists in the business. In the end Undertaker hits Vader low while going for the Vader Bomb and chokeslams Vader off the ropes for the near fall. Undertaker hits a second chokeslam before delivering a massive tombstone for the win at 12:38 to retain.

Next we see more footage of fans flocking to see the Harts over the weekend before a video package tells the story of the “chaos and mayhem” in the WWF as well as the war between the Hart Foundation and Stone Cold Steve Austin. “Ten men. One Brawl. The countdown to chaos in Calgary is complete. The moment of mayhem has arrived.” 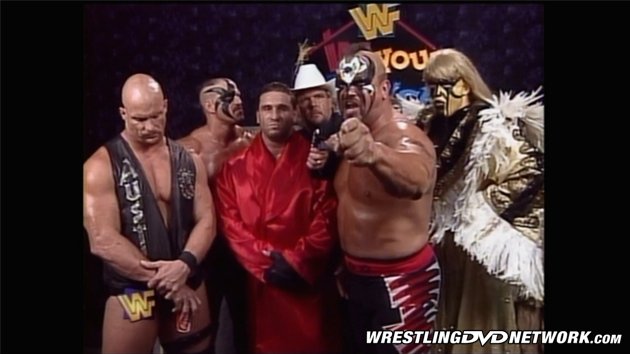 Backstage, Hendrix is with Austin, the Road Warriors, Goldust, and Ken Shamrock. Goldust says he was the “peacemaker” who brought the team together and that they’re going to bring the fight tonight. Shamrock says when he enters his “zone, it’s time to get it on.” Animal shouts about survival of the fittest as Hawk growls the obligatory “what a rush!” Dok tries to interview Stone Cold Steve Austin but Austin walks off, the rest of the team in his wake, to the ring.

In the arena Jake Leiske, Angela Kelman, and Shauna Rae Samograd, the British Columbia Country Music Association award-winning trio “Farmer’s Daughter”, are in the ring to sing “O Canada”, which the Calgary crowd loves. Afterwards Howard Finkel, in a cowboy hat, introduces a few of the “notables” in the audience. First is the late Ralph Klein, the 12th Premier of Alberta, followed by Stu and Helen Hart, each of which get a rousing ovation. 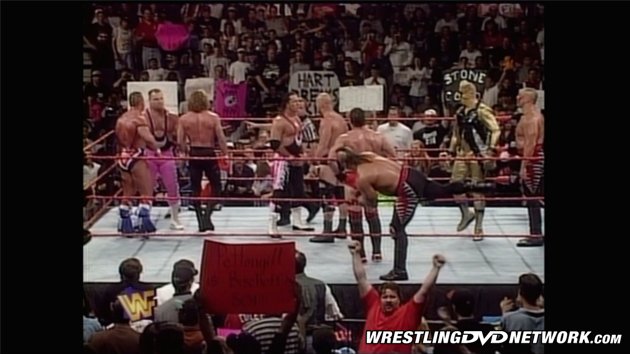 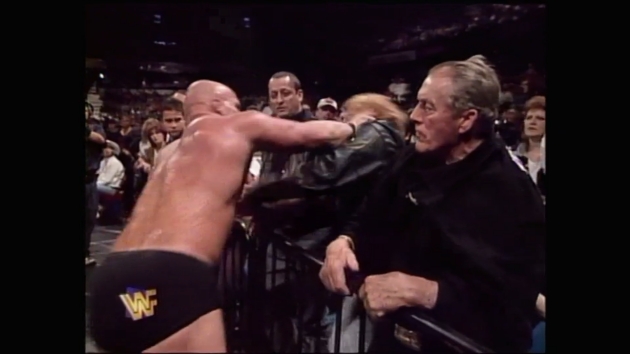 This match is, quite simply, one of the greatest matches—singles or tag—in WWF/E history. In and of itself this match is a masterclass in psychology, pacing, timing and, most of all, storytelling; every breath in this match has a purpose. The match itself is all-out war with everyone having a chance to shine. After injuries to Owen and Stone Cold Steve Austin the match becomes an 8-man fight until the two make their way back to the ring. Eventually Owen and Austin spill outside and fight right in front of the Hart family at ringside. After Austin grabs Stu Hart, Bruce and Wayne Hart storm the barricades and fight with Austin. Bruce legitimately bruised Steve Austin’s kidneys with a stiff shot that gets the crowd chanting for Bruce as Owen, in the ring, school boys Austin for the pin at 24:32.

After the match “all hell” breaks loose, as McMahon says, as the war rages on in and out of the ring until security comes to the ring and breaks it up. After the ring is cleared the Foundation’s music plays and the family celebrates the big win in the ring. Suddenly Stone Cold Steve Austin returns and waffles “The Anvil” with a chair. In a flash the Hart’s swarm Austin as security cuffs the “Rattlesnake” and lead him off. Austin bending and flipping the bird as he leaves. 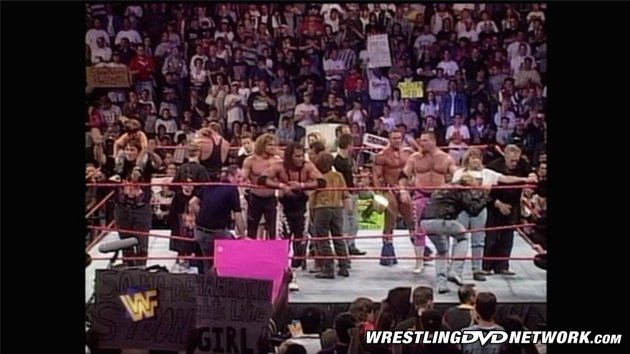 Back in the ring Bret and Brian Pillman help Stu into the ring as the rest of the family (and a few strangers) fill the ring to celebrate. Eventually every Hart in the country is in the ring and basking in the glory as the PPV comes to a close.

Looking back on this event today it’s hard not to rank this event as one of the very best the WWF/E has ever done! All the matches delivered or (in the case of Undertaker/Vader) over-delivered, and the self-contained Mankind/Helmsley angle created the kind of unpredictable feel that was sorely lacking from WWF TV at the time. 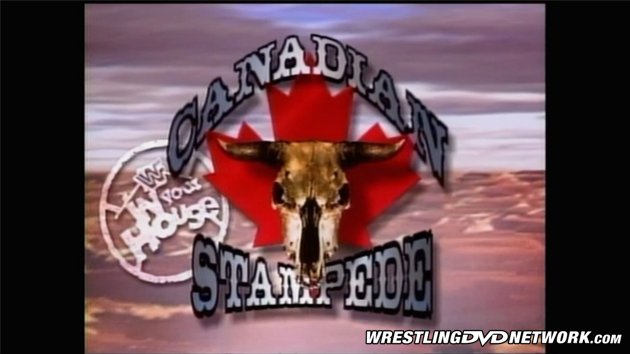 If you haven’t seen this event do yourself a favor and seek this one out. So if you’re already subscribed to the WWE Network, what are you waiting for? Hop over and check out this legendary In Your House event for yourself! As always, let us know what you think in the comments section.

Need more of your WWE Network fix? Be sure to visit our friends at WWENetworkNews.com.

Watch every WWE PPV (including Great Balls of Fire), and over 8,000 more hours of content on the WWE Network. Your first month is FREE! Click here to subscribe to the WWE Network.