This week Throwback Thursday dips into the archives of the WWE Network to revisit a classic edition of WWF Monday Night RAW that happened 25 years ago today!

The summer of 1993 was a down time for the World Wrestling Federation and the business writ large. Behind the scenes Vince McMahon was facing a serious federal investigation regarding McMahon’s role in the distribution and use of anabolic steroids in the WWF that would eventually lead to an indictment in November of ’93. If that weren’t bad enough a sluggish economy in the late 1980s spawned a recession that reduced the buying power of tens of millions of Americans and affected the entire entertainment industry, particularly professional wrestling, which was already weakened thanks to the “Golden Era” bubble bursting around the same time. As a result the Federation was in a state of transition. Not only had Vince McMahon resigned as President of Titan Sports (in name only) but Hulk Hogan, the WWF’s biggest star, was on his way out following the European tour in August ’93.

Though the WWF was looking to feature younger, more athletic wrestlers as top stars (Bret Hart, Shawn Michaels, Razor Ramon, etc.) and get away from the muscled-up babyfaces and the tired formulas attached to it, old habits die hard. Enter the infamous “Lex Luger experiment” in which Lex Luger, a former star of the rival World Championship Wrestling, would be positioned as the WWF’s next Hulk Hogan. With the push for SummerSlam ’93 in full swing the Luger/Yokozuna story was about to become the focal point of everything World Wrestling Federation. 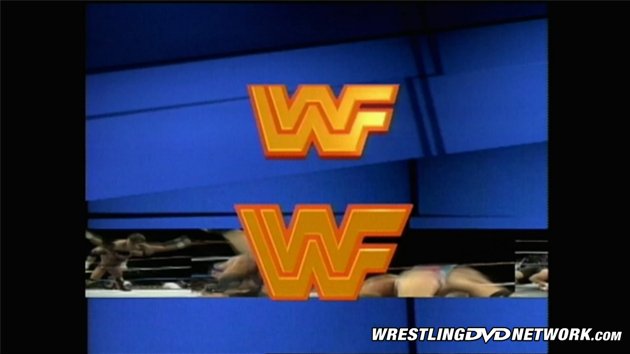 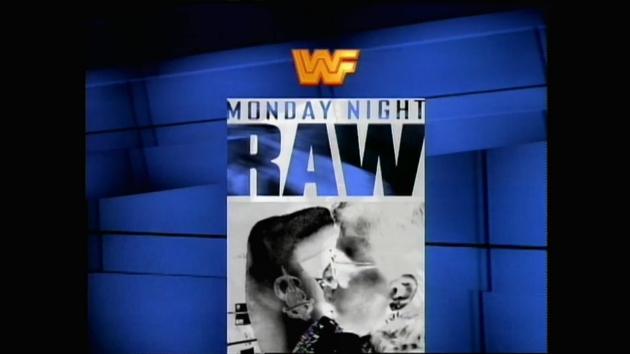 But how well does this edition of RAW hold up 25 years later? Let’s hit ‘play’ and find out!

Edits are few and far between, for those keeping score, and context is nearly complete with all prior editions of Monday Night RAW and all previous PPVs currently available on the Network for you to enjoy right now. The syndicated TV of the day, Superstars and Wrestling Challenge, as well as USA Network’s All American Wrestling, are currently not available on the Network.

The show opens with preview footage of the July 4th “Bodyslam Challenge” aboard the U.S.S. Intrepid at Pier 86 on the Hudson River in Manhattan. We see one person after another, wrestlers and pro athletes alike, try and fail to slam World Heavyweight Champion Yokozuna.

We get the great, original Monday Night RAW show open next followed by Vince McMahon welcoming us to the show and talking about the “Bodyslam Challenge” aboard the U.S.S. Intrepid from yesterday. 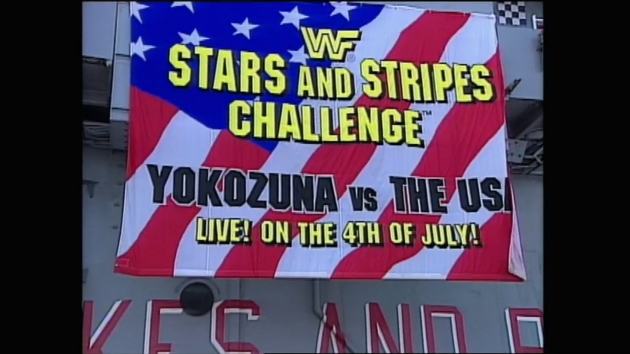 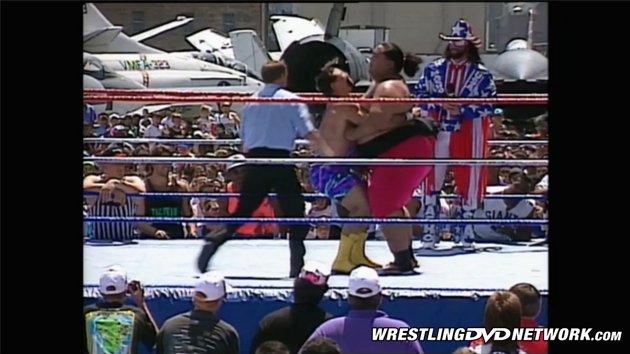 Next we go to the actual challenge aboard the U.S.S. Intrepid. The winner gets a brand new Chevy Silverado pickup truck! Lee Rouson, the recently retired running back for the New York Giants and Cleveland Brown, sings the national anthem. If you thought you were listening to Cuba Gooding, Sr., you wouldn’t be far off. We see one athlete after another, including Rouson, Bob Backlund, Pittsburgh Penguin Peter Taglianetti, Scott Burrell of the Charlotte Hornets, World Tag Team Champion Scott Steiner, Tatanka, former Atlanta Falcon Bill Fralic, Crush, and “Macho Man” Randy Savage try and fail (or in the case Scott Burrell, walk away) to slam the 550-pound Yokozuna, an “embarrassment to America” according to Vince McMahon.

The contest appears to be over when a helicopter arrives and Lex Luger, wearing red, white, and blue, walks to the ring, receiving a mixed reception to say the least. Luger pushes past Bobby Heenan, gets in the ring, calls Fuji a “cancer in the World Wrestling Federation”, and calls Yokozuna “an overstuffed, sushi-eating, rice-choppin’ wrestler”. Luger tosses Fuji from the ring and prepares for his attempt to slam Yokozuna. At last Yokozuna charges Luger, who sidesteps the Champion, and Yoko goes face-first into the turnbuckle. A dazed Yokozuna turns, walks into Luger’s forearm, and is body slammed as the crowd goes crazy. Luger celebrates on the shoulders of the Steiner Brothers with a flag in each hand as the segment ends. 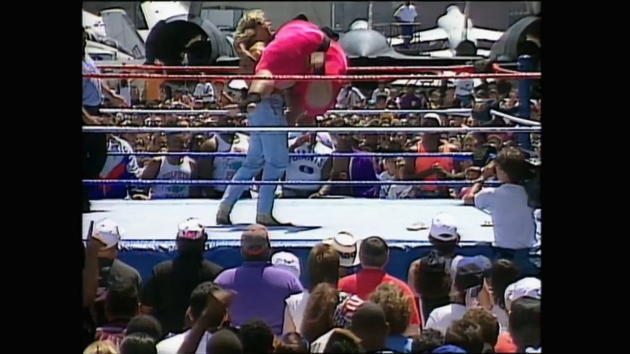 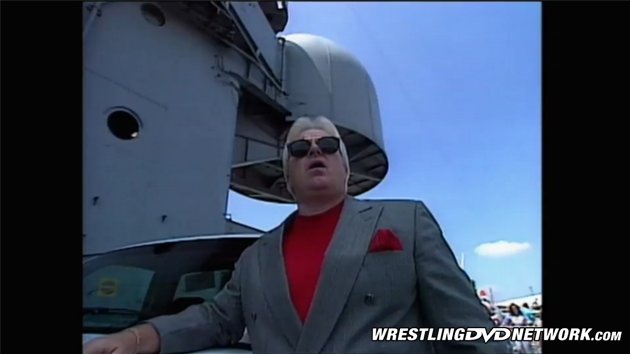 Back in the Manhattan Center McMahon says that Luger immediately challenged Yokozuna to a WWF title match but the offer was refused by Mr. Fuji and then thanks all involved in making the event possible. Savage says “Lex Luger, we are damn proud of you!” and tells Heenan it was “the bodyslam heard around the world.” According to Heenan Lex Luger was “damn lucky!” 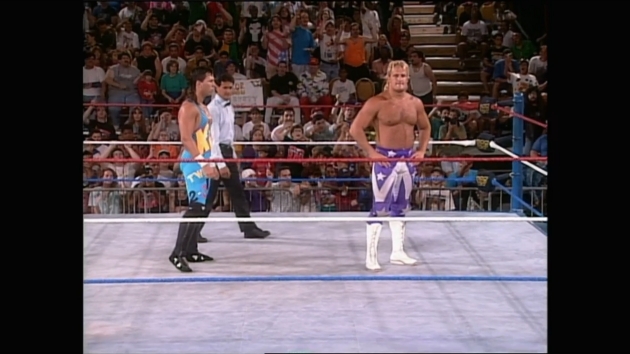 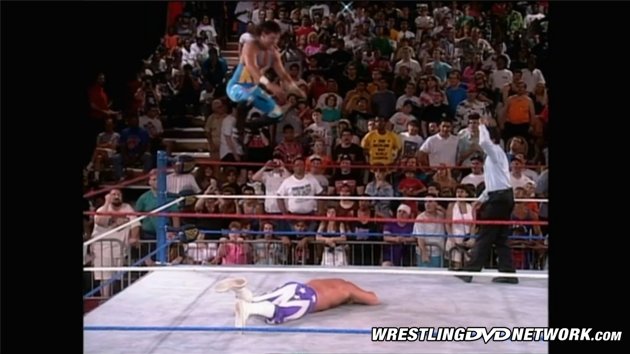 Blake Beverly had been working solo since his partner, Wayne “Beau” Bloom, retired at the end of April ’93. 1-2-3 Kid, meanwhile (sans eyebrows), was in the midst of a major upswing since defeating Razor Ramon on the May 17, 1993 edition of RAW.

This is a great showcase for the Kid who displays one impressive move after another, popping the crowd and commentators alike. Bloom takes over and thrashes Kid in and around the ringside area which allows Kid the opportunity to do some great Ricky Morton-esque selling. Eventually Beverly misses a splash from the second rope which allows Kid to hit a guillotine leg drop from the top for 1-2-3 at 8:02.

Up next is the first Monday Night RAW vignette for Men on a Mission (Mable, Oscar and Mo). This is followed by an IcoPro and old school WWF action figure spots.

We go to the back where Luna Vachon stands with Bam Bam Bigelow, calling Bigelow “the most dominant force in the World Wrestling Federation”. 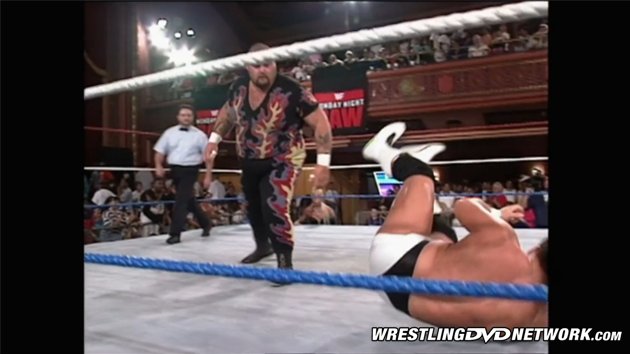 Squash city here! Bigelow runs over Maggs and hits a pair of avalanche splashes to score the pin at :42-seconds. The match is so quick that Heenan can barley spit out his Bigelow/Tatanka story!

Next we see a promo for USA Network’s All American Wrestling and the “Mean” Gene/”Brain” road trip across America.

At the announce position Heenan gives a few details of the upcoming SummerSlam ’93 PPV while McMahon sells All American Wrestling as the place to get the latest news on the event. 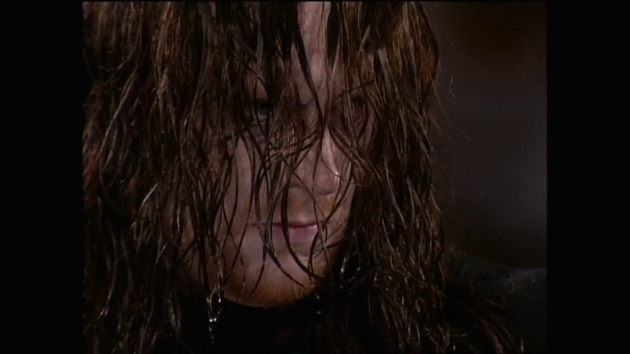 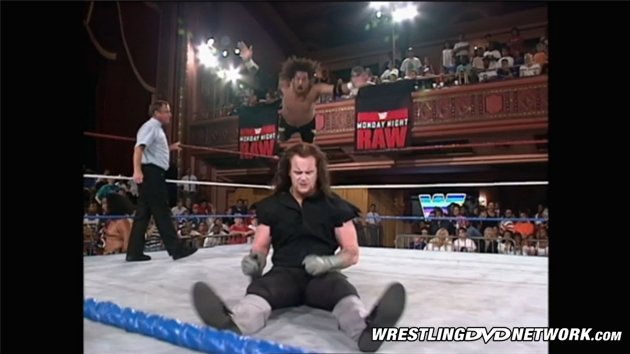 There’s a botched leap frog early but Undertaker simply walks through it, no-sells it, and carries on like a true pro. The story here is Undertaker seemingly being lost or a step off his game due to the absence of Paul Bearer and the urn. Samu manages to beat the bejabbers out of Undertaker in and out of the ring and, with Undertaker unable to sit up, looks to have the match won with a diving headbutt. When Samu goes for a second flying headbutt rather than the pin Undertaker sits up, chokeslams Samu, and ends the match with the tombstone piledriver at 7:25.

Next up is a goofy WWF Mania promo starring Todd Pettengill.

After a break Vince McMahon interviews Mr. Fuji and World Heavyweight Champion Yokozuna about the July 4th “Bodyslam Challenge” and Lex Luger slamming the Champion. Fuji says Luger cheated by using the metal plate in his forearm and claims, like Heenan, that the “slam” was actually a hip toss. Fuji says he refused Luger’s title match because Luger cheated and took advantage of “my Yokozuna”. McMahon asks why not take the challenge of Bret Hart, Randy Savage, or Hulk Hogan and Fuji says Yokozuna will face any man at any time, even right now, but that no one wants to challenge Yokozuna, that Yokozuna is a “human garbage disposal.” 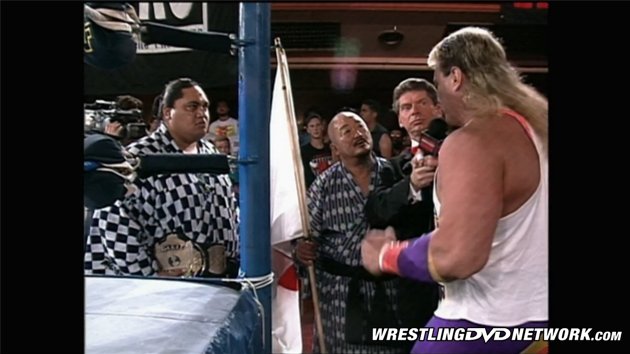 This brings out Crush, who thanks Lex Luger before taking Mr. Fuji up on the “open contract” to face Yokozuna. Fuji tries to take back the challenge but Yokozuna overrules Fuji and agrees to face Crush next week. Fuji says Crush will lose face in Hawaii while Crush says he’s proud to be from Hawaii and even more proud to be an American.

A SummerSlam ’93 promo airs next while back at the announce position McMahon, Savage, and Heenan shout about Crush challenging for the World title next week. 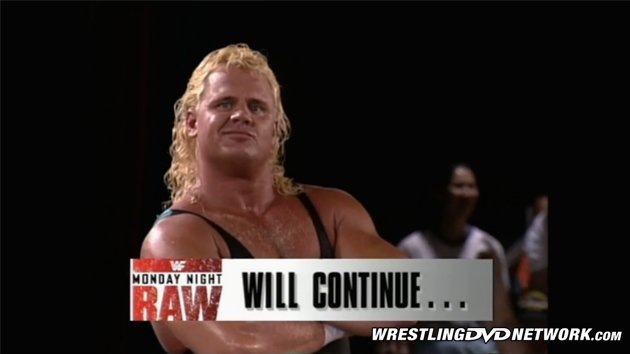 Prior to the match Mr. Perfect strings his chewing gum around the glasses of one of the RAW Girls who looks less than enthused. As for the match, it’s a squash. Perfect lands a beautiful dropkick, chops the hair off Costello’s chest, and ends things with the Perfect-Plex to score the win at 1:01.

After a break we see one final slow-motion replay of Luger slamming Yokozuna to end the show.

Surprisingly the show and the matches, including the squashes, hold up extremely well in 2018.

This is simple, compelling storytelling from start to finish that works, proving that even in the down times the WWF is as good as it gets. Besides, any show with 1-2-3 Kid, Bam Bam Bigelow, Undertaker, and Mr. Perfect on it is a winner in my book. If you’ve never seen this it’s well worth your time and if you have it’s worth another look. 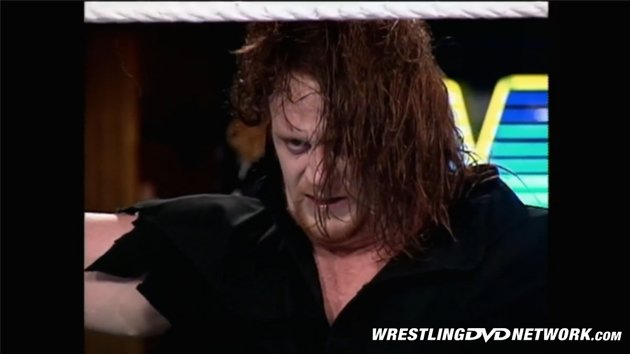 Already subscribed to the WWE Network? Then you can relive this classic edition of RAW right now or see it for the very first time! As always, let us know what you think in the comments.

Watch every episode of RAW’s 25-year history as part of more than 10,000 hours of content on the WWE Network. Your first month is FREE! Click here to subscribe to the WWE Network.