With the 30th annual Royal Rumble just weeks away, Throwback Thursday on WrestlingDVDNetwork.com is looking back at some of the WWE’s greatest Royal Rumble moments, from memorable build-ups to the show itself with a little help from the WWE Network.

This week we’re taking a trip back to the 5th anniversary of Monday Night RAW with RAW #214, one of the most memorable pre-Rumble RAW‘s ever. Featuring a flurry of Stone Cold Stunners and a classic HBK/Undertaker confrontation it’s no wonder the WWF was slowly gaining ground on World Championship Wrestling. Though this taped RAW lost in the ratings to NITRO 3.3 to 4.3 it could be argued, in hindsight, that the great war was already over. 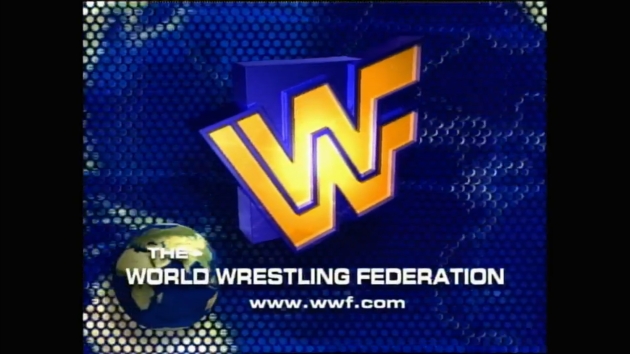 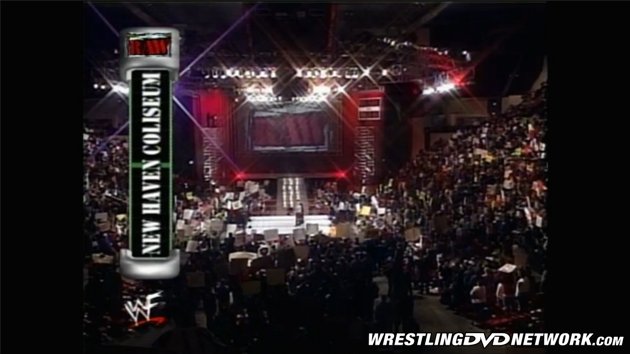 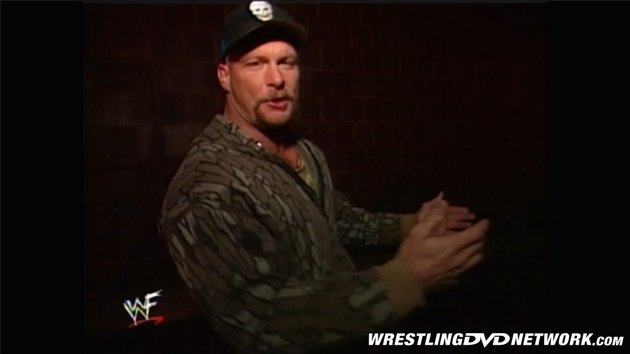 The show opens with Stone Cold Steve Austin walking into the arena cutting a promo about the upcoming Royal Rumble. Austin says that rumor has it everyone is gunning for him, but that’s not the way it is, that everyone in the locker room has a pager and when they all see “the 3-1-6” their ass belongs to him. Austin says he’s going to do unto others before they do unto him.

After the classic RAW opening Jim Ross welcomes us to the show, saying that Mike Tyson’s role at WrestleMania XIV will be revealed during the show as Faarooq and friends make their way to the ring for the first match. 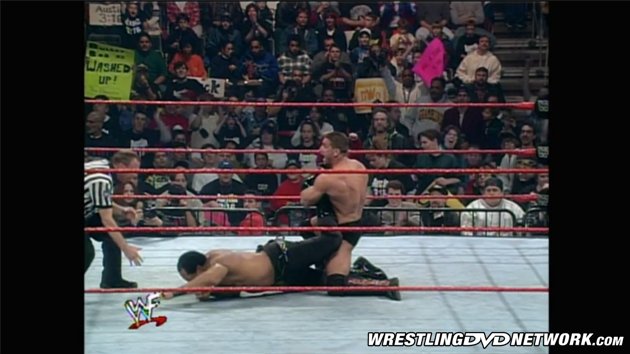 The story in this match goes back to the September 15, 1997 edition of RAW when Faarooq injured Shamrock with a spinebuster. This was also the beginning of Rock’s eventual takeover of The Nation. As for the match, it’s solid for what it is. Intercontinental Champion The Rock, who faces Shamrock at the Royal Rumble, comes out to give orders to Kama and D’Lo. In the end, The Rock distracts the referee as Kama holds a chair in the corner. Shamrock reverses the Irish whip and Faarooq hits the chair instead. Shamrock lands a belly-to-belly and then sinks in the ankle lock for the submission win at 5:04.

WINNER is “The World’s Most Dangerous Man” Ken Shamrock (Submission, 5:04)

After the match Kama and Faarooq argue at ringside while The Rock and Ken Shamrock walk each other down. Suddenly Stone Cold Steve Austin hits the ring and blasts Shamrock and The Rock with Stunners before walking out through the crowd. 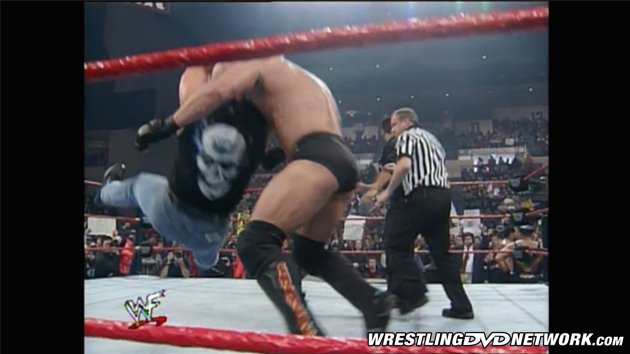 Next, Michael Cole, Kevin Kelly, and JR run down the rest of the show. Before the break we see Jim Cornette come to the ring with Dennis Coralluzzo and Howard Brody, vice-president and president, respectively, of the NWA. Back from break Cornette talks about the history and tradition of the NWA and announces the winner of the next match will be awarded the NWA North American Heavyweight Champion.

This one isn’t much of a match. Dennis Coralluzzo starts to argue with the referee as Windham sets Jarrett up for a superplex. With the referee distracted Cornette sneaks into the ring and smashes his racquet across Windham’s back as Barry goes for the superplex. Jarrett rolls over, tosses an arm across Windham, and wins the NWA North American Heavyweight title at 3:38.

After the match, as Cornette, Coralluzzo, Brody, and Jarrett celebrate, Stone Cold Steve Austin hits the ring, blasting Jarrett with a Stone Cold Stunner before mocking Jarrett’s strut and taking off to the back. 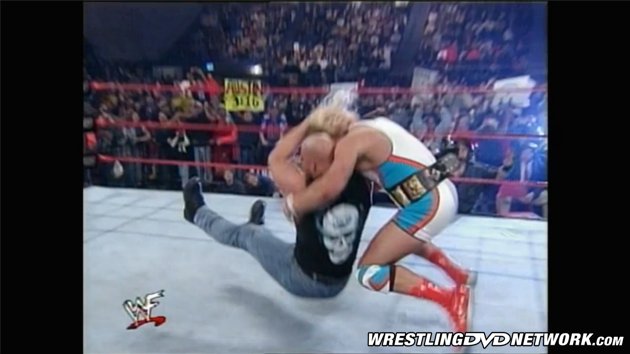 After a break we see replays of Austin taking out Shamrock and The Rock with Stunners. Next, Michael Cole asks Ken Shamrock about the Royal Rumble and Stone Cold Steve Austin. Shamrock says he’d like nothing more than to have it come down to he and Austin in the Royal Rumble. Sunny comes to the ring next, dressed as a school girl, to announce the next match.

This one is just a sloppy mess, period, and not at all entertaining. As Kurrgan makes his way to the ring Skull hits Sniper with a DDT for the win at 3:40. After the match the three Truth Commission members beat down D.O.A. until referees break it up as the commentators sell Kurrgan’s chances of winning the Royal Rumble.

After a break we see a Twix Rewind of Undertaker helping Kane the previous week fight off the D.O.A. and others before staring each other down. 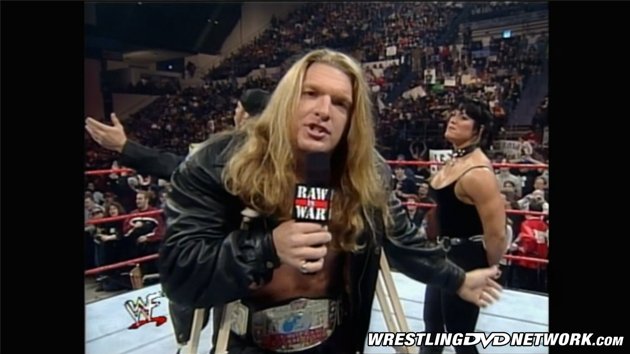 D-Generation X is out next. Triple H is in a wheelchair after dislocating his knee on December 28 in Hamilton, Ontario, Canada. Footage is shown of the last week’s RAW where Triple H helped HBK retain the WWF title over Owen. Triple H says Owen has gone from being the hunter to the hunted and calls Owen out for a fight. Owen shows up on the TitanTron instead, saying that he wants Triple H’s right knee to heal so he can break the left one. Triple H then mocks Owen, telling him to watch his back.

Back from break we see the 1-800-COLLECT Slam of the Week, featuring Vader crushing a jobber with a moonsault followed by a re-air of Stone Cold’s opening promo and replays of the Stunners so far on RAW. Next the classic War Zone intro airs and Savio Vega and Los Boricuas make their way to the ring. 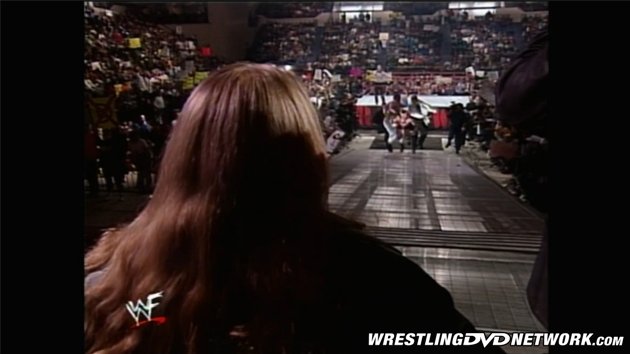 With Los Boricuas at ringside and D-X on the ramp, Owen Hart is outnumbered 7-to-1. Owen traps Vega in the Sharpshooter until Jesus climbs on the apron, forcing Owen to break the hold. Savio tries to take advantage but gets rolled up in a reverse cradle and pinned at 4:08. After the match Owen charges D-X but gets wiped out by Los Boricuas instead. Triple H slaps Owen around before paying off Los Boricuas!

After a break we see replays of Owen being attacked by Triple H. Paul Bearer makes his way to the ring as we see again Undertaker helping Kane from the previous week. Bearer says he curses the ground Undertaker walks on, hates his guts, and blames Undertaker for “losing” Kane. Bearer pleads with Kane to listen to him and come home. In the back we see Austin walking out of the locker room where Mark Henry lays under a table holding his head.

Brandi started out in the WWF as Salvatore Sincere until Mero outed him as a jobber. As for the match, it’s not very good. Mero falls through the ropes onto Sable and Brandi tries to help her. Mero attacks hits Brandi as Brandi lifts Sable. Mero hits a TKO and goes for another when Stone Cold runs in and hits Mero with the Stunner, giving Mero the win at 3:48 by DQ.

After a break we get replays of all the night’s Stunners from Stone Cold. JR and Lawler talk about Austin being the number one seed in the Royal Rumble and how it’s every man for himself. As Flash Funk makes his way to the ring we see footage from last week of Austin introducing TAFKA Goldust to “Crapper 3:16”, a porta potty. 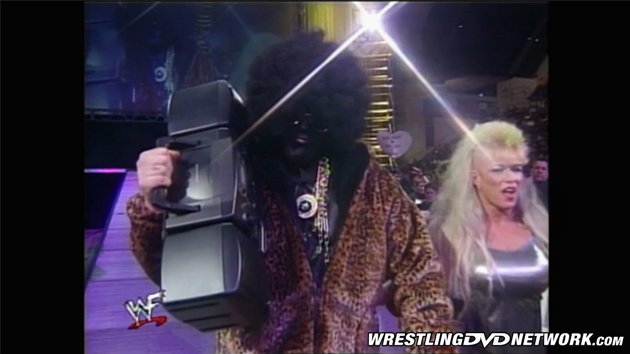 Goldust comes out… in blackface and an afro. You can only imagine what would happen in 2016. For a few moments this is actually a wrestling match complete with psychology. Funk goes up to the top when Luna pushes him off, resulting in a DQ for Funk at 2:35. After the match Goldust hits the Curtain Call. Out of nowhere Vader rushes the ring and takes out Goldust before hugging Flash Funk.

Next we see a vignette of Blackman kicking booty and taking names while JR and Lawler hype his chances in the Royal Rumble. After a break we see footage from last week of Cactus Jack fighting with the New Age Outlaws and the debut of Chainsaw Charlie (Terry Funk) who chases the Outlaws with the chainsaw.

These teams were on-again, off-again foes by this point. At this time, though, the Outlaws were preparing to face the Legion of Doom at the Royal Rumble. The end comes when Billy Gunn reverses the Stage Dive into a roll-up for the pin at 5:00. After the match Cactus Jack and Chainsaw Charlie hit the ring and chase the Outlaws off.

Now we’re headed to Ft. Lauderdale, Florida for a Don King promo. Don King says he’s excited for WrestleMania and Mike Tyson joining forces. But, he says, they’re not quite there yet, that they still need to dot the “i”s and cross the “t”s. When it’s done, he says, it’ll be one of the greatest shows on Earth. Then Don King hypes it like the deals done when he just told us it wasn’t!

After a break we see highlights of the legendary Hell in a Cell match between Undertaker and Shawn Michaels, hyping the “Casket Match” for the Royal Rumble. HBK comes to the ring alone and calls out The Undertaker. Michaels says Undertaker is a glutton for punishment who doesn’t know when to stop, and that at the Royal Rumble he’s going to prove Undertaker is “nothing more than a loser.” 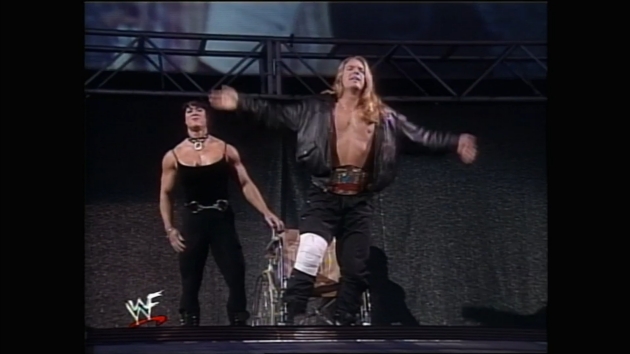 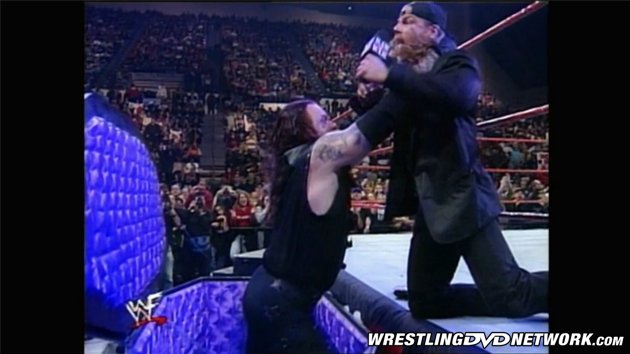 Undertaker’s music hits, the lights dim, and four druids push a casket to ringside. The casket is marked with D-X graffiti and HBK thinks its Triple H and Chyna in the casket and kneels down next to it expecting them to pop out. Instead Chyna and Triple H appear at the top of the ramp trying to warn Shawn it’s not them in the casket. Suddenly the casket opens and The Undertaker stands up, grabbing Shawn Michaels and pulling him into the casket with him.

The show goes off the air as the two fight inside the casket.

This frantic edition of RAW is both a nostalgic slice of the “Attitude Era” and, at the time, the perfect build to one of the most memorable and important Royal Rumble events in company history. If you’re already subscribed to the WWE Network, why not go relive it too?

Check out this classic Monday Night RAW and let us know what you think in the comments.

Thanks for reading! And until next week, see ya at ringside!

Watch every Monday Night RAW, the upcoming Royal Rumble 2017 PPV, and 7,000 more hours of content on WWE Network. Your first month is FREE! Click here to subscribe to WWE Network.