Exactly 18 years ago today the World Wrestling Federation taped yet another classic edition of Monday Night RAW. The WWF had a ways to go to outdo the previous week’s edition, which featured the classic Zamboni incident as well as Undertaker and Kane “breaking” Mr. McMahon’s leg, but Monday Night RAW #280 sure came close.

This week Throwback Thursday on WrestlingDVDNetwork.com takes a look back at this memorable edition of RAW thanks to, what else, but the WWE Network. From the debuts of Yurple the Clown and Mr. Socko to a PPV worthy main event, Monday Night RAW #280 is an “Attitude Era” masterpiece. But, how well does it hold up today? That’s what we’re going to find out. 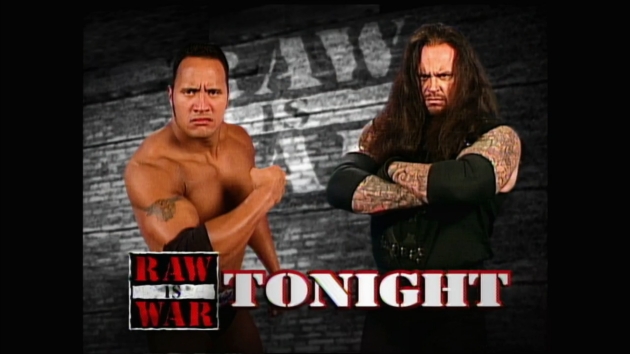 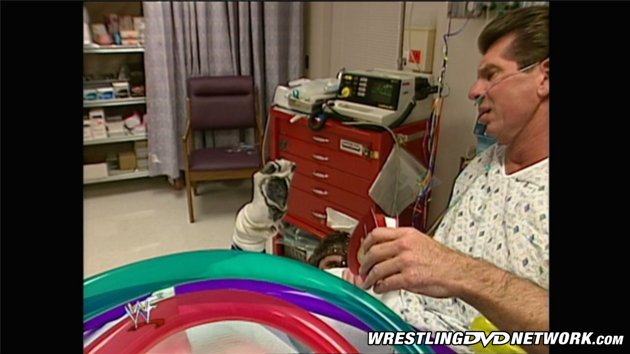 Remember, at this point in 1998 the WWF was still only live every other week. But taped RAWs, like this one, didn’t hurt the WWF’s ratings one bit. Having turned the corner in their bitter war with WCW, the WWF’s marquee show routinely outperformed NITRO, even with taped shows and results readily available online. On the night this edition of RAW aired it drew a 4.55 to NITRO’s 4.5, beating WCW in the ratings by a less than 600,000 viewers.

As for context, all previous Monday Night RAWs and PPVs are currently available on WWE Network.

The show opens with an excellent video package highlighting the iconic Zamboni incident (41:35 – 1:00:29) from last week as well as Kane and Taker destroying Mr. McMahon’s left ankle after Mr. McMahon reneged on his deal to award one of them the tile after they couldn’t keep Austin away from McMahon. After the usual fire and pyro open we go right to the ring for the opening bout. 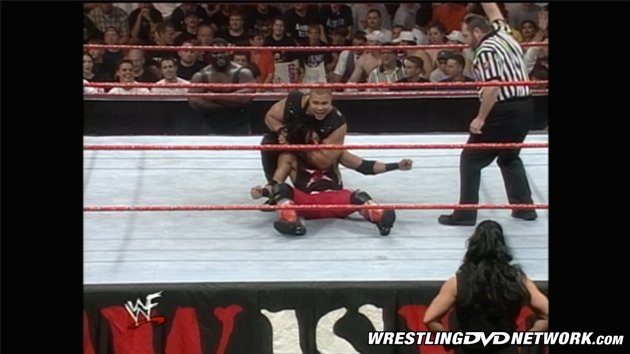 D’Lo Brown defeated X-Pac for the European title on the September 21st edition of RAW. D’Lo, meanwhile, won a 6-man four corners elimination match the previous week to earn this title shot. This is an often times fast-paced match that doesn’t rely on much psychology at all, just enough for the match to make sense. The subplot to this match was the ongoing Mark Henry/Chyna feud that sees Chyna served with legal papers in the middle of the match, legal papers from Mark Henry, we learn, accusing Chyna of sexual harassment. In the ring, X-Pac seems to have the match in hand until Mark Henry grabs X-Pac’s foot. X-Pac dives over the top rope at Henry who catches X-Pac and drives his spine into the ring post. D’Lo hits the frog splash for the pin and the European Championship at 5:17. This ended X-Pac’s first European title reign at 14 days, and marked D’Lo Brown’s second European title title reign.

J.R. and King run down the big matches on the card before footage of The Oddities playing touch football is shown. After a break The Headbangers come out unannounced and challenge Insane Clown Posse to a match.

ICP hit the ring and immediately this thing is a squash with Mosh and Thrasher putting the boots to ICP. After the Headbangers hit the Stage Dive on a steel chair The Oddities run out and make the save, sending Mosh and Thrasher running. The match is over, as a no contest, at 1:43. After the match Thrasher gets on the mic and tells the ICP they “suck” as The Oddities carry ICP from the ring.

We check in on Mr. McMahon via satellite before footage from the prior night’s Sunday Night Heat (a series currently unavailable on the Network) of Austin tracking down Mr. McMahon’s satellite remote wiring and destroying it is shown. Austin will be on RAW later in the show, we’re told, “to tell his side of the story uninterrupted.” 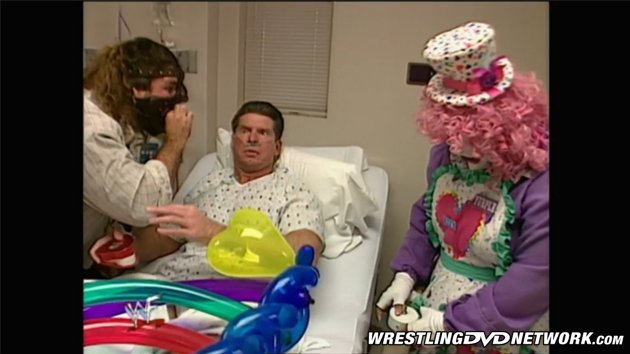 After a break we again see more of the Zamboni incident before going “live” to Mr McMahon’s hospital room (20:17). Mankind arrives, bringing two balloons, a box of chocolates that Mankind has already eaten, and a surprise visitor: Yurple the Clown, complete with priceless Mankind-created theme music. Yurple makes balloon animals while Mankind blows a siren whistle in McMahon’s face. Mankind has one more visitor: Mr. Socko! McMahon finally looses his temper and throws them out of the room. In the arena, Sable prepares to come out for commentary. 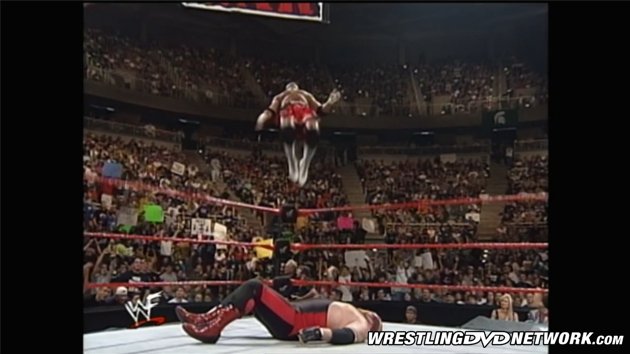 The night this was taped, September 29, 1998, marked Vader’s last night of television tapings in the WWF for 14 years. By this time the once unstoppable “Rocky Mountain Monster” was a glorified jobber, and, while Vader gets his fair share of offense in, this match is no different. Late in the match Jacqueline jumps on Vader’s back. Rather than slam her, Vader sets the Women’s Champion down. Mero takes advantage of the distraction and hits Vader low before hitting the Marvelocity (shooting star press) for the pin at 4:14. After the match Mero trashes Sable, who gets in the ring only to be attacked by Jacqueline, who cuts a portion of Sable’s hair weave.

After a quick preview of what’s to come, including more of Mr McMahon in the “medical facility”, we see a Steven Regal “Real Man” promo. As Owen Hart comes to the ring we see footage from last week when Owen hurt Dan Severn’s neck with a piledriver, the same way he nearly crippled Austin at SummerSlam ’97, and footage of Owen allowing X-Pac to cleanly pin him on the previous night’s edition of Sunday Night Heat.

Rather than wrestling, Owen Hart comes to the ring in street clothes. Owen cuts a promo about wrestling being his life and not meaning for anyone to get hurt, especially Dan Severn. Owen talks about seeing his wife and children in Severn’s eyes and apologizes before putting the microphone down and walking out of the ring.

Next we get promos for the matches to come and footage of Ken Shamrock warming up backstage. Back from break Michael Cole catches up with Owen Hart in the back. Owen has his bags packed and is leaving. “It’s over, I’m done. It’s over,” Owen says. 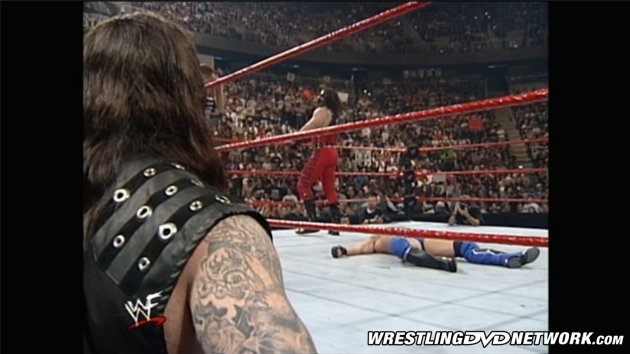 This was a sort of rematch from last week’s RAW when these two were on opposite sides of a big handicap tag team match where Shamrock prevented Kane from saving Undertaker from being pinned. This is a slow, plodding match that is house show quality at best. Undertaker comes out near the end and causes Kane to crotch himself on the top turnbuckle. Shamrock connects with a super belly to belly for the win at 7:11.

More promos for Austin appearing live on the show air.

The main story in this one is the continued Marlena/Val Venis/Goldust saga, but the secondary story revolves around Edge confronting his “brother” Christian, Gangrel’s newest partner, at ringside. As Edge argues with Christian, Gangrel slides under the bottom rope and attacks Edge. Gangrel is counted out at 2:36 as he and Christian put the boots to Edge. After the match an usher brings Val Venis a golden note. Suddenly Goldust’s music hits and “The Bizarre One” announces he’ll be returning next week on RAW to the shock of Val Venis and Terri.

More footage of Austin kicking tail on Sunday Night Heat is shown. Back in Mr. McMahon’s room McMahon wants a new nurse and something for the pain. 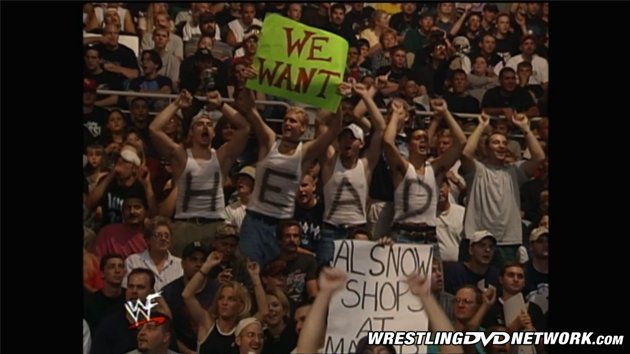 Al Snow had just been reinstated two weeks ago after defeating WWF Commissioner Sgt. Slaughter in a “Boot Camp” match. This match is a fun, fast-paced match in the vein of ECW that sees the two battle in and out of the ring. Eventually Sgt. Slaughter comes to ringside to watch and, as Al Snow climbs the turnbuckle with Head, crotches Snow. The referee calls for the bell as Al Snow wins by DQ at 4:17. After the match Slaughter leaves with Jarrett.

Another promo for the Rock/Undertaker main event runs.

This is a basic give-and-take TV match. Lots of Bill Clinton jokes in this one. D’Lo taunts X-Pac with the European title until Chyna comes out and waffles D’Lo from behind. As Mark Henry shouts at Chyna from the ring, X-Pac sneaks up behind Henry and hits the X-Factor when the big man turns around. X-Pac rolls out of the ring while Road Dogg picks up the win at 3:40. DX celebrate after the match while D’Lo and Henry are left speechless. Henry jumps out of the ring, grabs a steel chair, and chases DX to the back.

Next we see The Rock warming up backstage and Mr. McMahon asking for more juice. After a break we see, yet again, the Zamboni spot and Undertaker/Kane attack from last week. 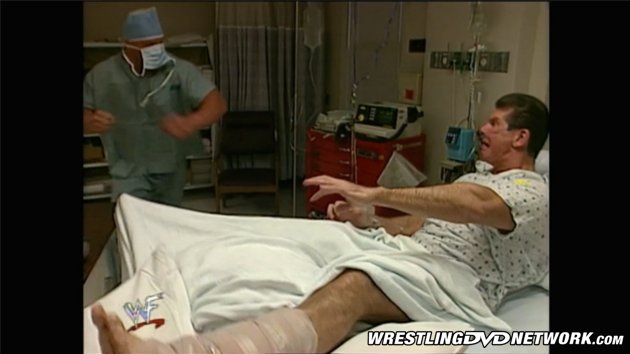 Up next is another of the all-time classic segments in company history. Stone Cold Steve Austin, dressed as a doctor (1:16:27), beats the bejabbers out of Mr. McMahon, even using the bed pan. Austin uses the cardiac paddles on McMahon before giving him an enema. After a break we get a replay of the hospital attack before going to the ring for the main event. 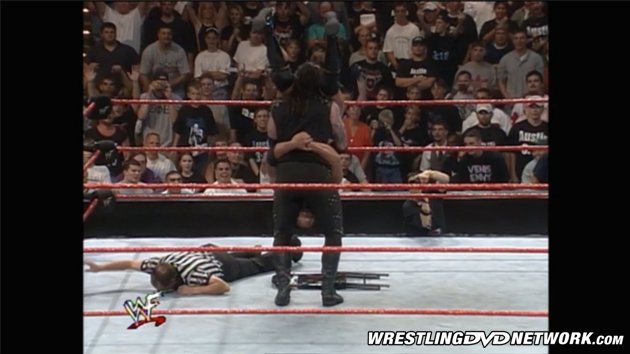 This was a PPV caliber main event for sure. Nip and tuck, with nary a slow moment, Rock and Undertaker tore the house down and delivered an epic, albeit short, main event to cap off a classic night of WWF action. Kane pays his brother back by striking Undertaker in the back with a chair and sliding the chair in the ring, leading to a Rock Bottom. With the referee down, however, Rock is unable to score a pin. Rock tries to revive the referee as Undertaker sits up. Rock turns right into Undertaker who picks up Rock and hits a crushing tombstone piledriver on the steel chair for the win at 12:50.

Undertaker stands up and stares at the entrance, rolling his eyes in the back of his head as the show goes off the air.

There are some who dislike the “Attitude Era”, and for some very good reasons, but there is no denying that when it all clicked, as it did on this night, there was no better pro wrestling product on the planet than Monday Night RAW. 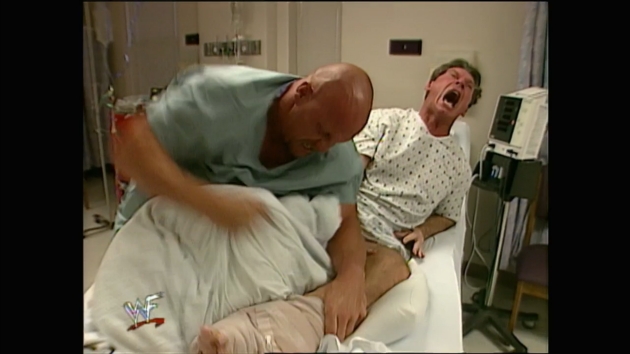 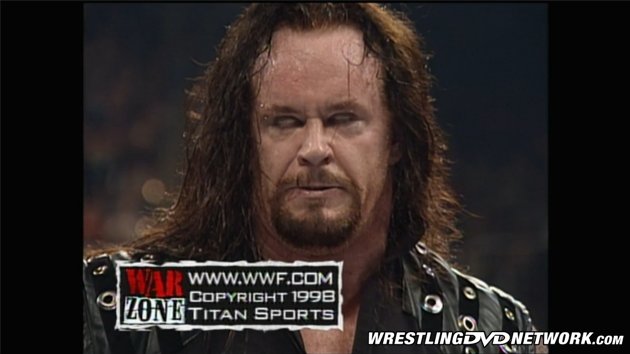 Featuring some decent wrestling and classic segments, Monday Night RAW #280 was an instant classic that, if you’re already subscribed, you can watch right now on WWE Network. Aside from some of the in-ring “action”, this edition of RAW is every bit as entertaining today as it was in 1998, and one I would highly recommend, especially for those unfamiliar with the “Attitude Era”.

That’s all for TBT this week – until next time, see ya at ringside!

Watch “Attitude Era” RAWs, the No Mercy 2016 PPV, and 6,000 more hours of content only on WWE Network. Your first month is FREE! Click here to subscribe to the WWE Network.