Throwback Thursday: ‘The Phenom’ vs. ‘The Beast’, As Seen on WWE Network

Throwback Thursday: “The Phenom” vs. “The Beast” 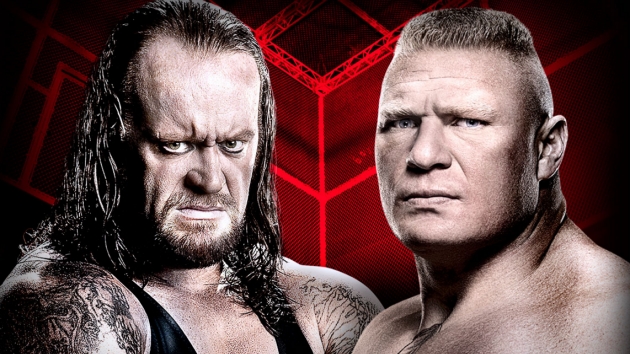 The Brock Lesnar/Undertaker war began on the Aug. 26, 2002 edition of Monday Night RAW when Lesnar cost “The Dead Man” a shot at Brock Lesnar’s Undisputed title in a “Number One Contender’s Match” against Triple H. Since then, The Undertaker and Brock Lesnar have put on some of the most physical and brutal matches of the post-“Attitude” era. Of the 9 televised matches the two men have had in WWE only 7 are presently available on the Network. The two missing matches, as of this writing, are:

With Brock Lesnar’s first WWE run slowly making its way to the WWE Network archives these missing matches will no doubt soon be available for viewing. That being said, this week’s TBT on WDN will focus only on the 7 Undertaker/Lesnar matches currently available on the Network.

After costing Undertaker the WWE title shot Lesnar took the then-Undisputed title to SD!. The Undertaker followed, making his surprise debut on the Aug. 29th SD! defeating Kurt Angle and Chris Benoit to earn this title shot. Having destroyed WWE legends Ric Flair and Hulk Hogan, and having beaten The Rock to become the youngest WWE Champion in company history at SummerSlam, Lesnar and Heyman turned their attention to the legend of the Undertaker, and his then-pregnant wife Sara. Undertaker pushed Lesnar farther than any man had before in a brawl that marked the end of the beginning. Next for both men would be a trip to hell. 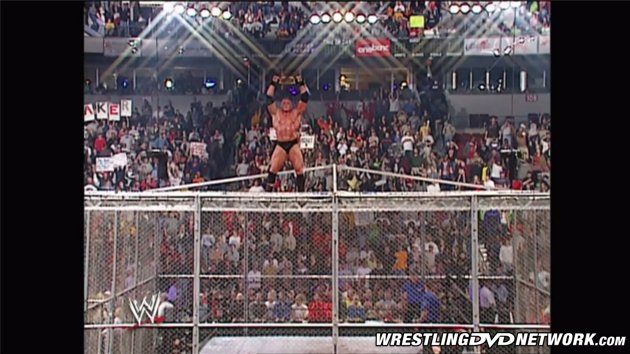 After digging up a woman from Undertaker’s past and “breaking” “The Dead Man’s” right hand, Lesnar and Heyman foolishly thought they had “The Phenom” reeling. They were sorely mistaken. While the theme of the first 8 Cell matches involved finding creative ways to escape the cell and things to do on top of it, The Undertaker and Lesnar raised the bar not by fighting to get out of the cell but by brutalizing each other in it. One of the bloodiest, most intense Cell matches ever, the greatness of the Lesnar/Undertaker “Hell in a Cell” classic lies in its athleticism, physicality and psychology, not stunt work or pratfalls. There are few matches in WWE history that compare to the brutality and intensity of this match.

Brock Lesnar held the WWE title until Survivor Series 2002 when Paul Heyman turned on Lesnar, allowing Big Show to win the title. Undertaker, meanwhile, hadn’t been seen since the end of October when his wife Sara gave birth. For “The Beast” to get the WWE title back Lesnar would need to win the Rumble. Having defeated Big Show to qualify earlier in the evening Lesnar entered at #29 while The Undertaker, making his return, entered at #30. While The Undertaker eliminated Kane, Brock Lesnar snuck up from behind and dumped “The Dead Man” over the top rope for the win. After the match Undertaker shook Lesnar’s hand, challenging Lesnar to a future title shot should Lesnar win the WWE title at WrestleMania XIX. 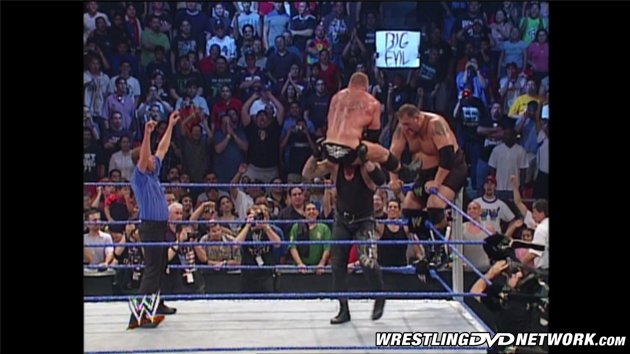 After losing the WWE title to Kurt Angle at Vengeance 2003 in a “Triple Threat Match” involving Big Show, Brock Lesnar was a man possessed. On the Aug. 21st SD! Lesnar destroyed Zach Gowen, leaving the young man in a pool of blood. After losing the WWE title rematch to Kurt Angle at SummerSlam 2003 Lesnar’s only hope for another rematch was to win this “Triple Threat Match”. This marked the first time Lesnar and Undertaker had squared off since January’s Royal Rumble. Though the match includes Big Show, The Undertaker and Brock Lesnar spend little time reigniting their epic war. With a “last ride” on Lesnar, The Undertaker defeated Brock Lesnar for the first time on TV and secured a WWE title shot against Kurt Angle the very next week.

Lesnar won the WWE title for a third time on the Sept. 18th edition of SD! from Kurt Angle in a classic “Iron Man Match”. The first challenger to Lesnar’s newly-won title was The Undertaker, whom Lesnar screwed out of the WWE title on the Sept. 4th SD!. After weeks of brawling, tables, chairs, and chains the first-ever “Biker Chain Match” was made for No Mercy ’03. Though the match is a far cry from the brawls and blood-lettings of 2002 it is a hard-hitting contest dripping with psychology and drama. Used as a vehicle to further the Undertaker/Mr. McMahon angle, and the coming end of “The American Bad Ass”, the “Biker Chain Match” would be one of the final matches between the two for over a decade. 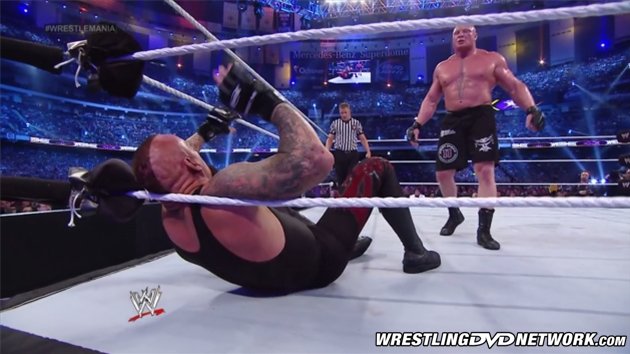 Eat. Sleep. Conquer. The Streak. After 8 years Brock Lesnar returned to WWE on a mission, taking out John Cena, Triple H, Shawn Michaels, and CM Punk before “The Beast” set its sights on “The Streak”. WWE deviated from the usual format for this match in that Lesnar made the match and went over last on TV yet won on PPV. Only a scant few knew the finish as of match time in what has become the most shocking moment in WrestleMania history. In its aftermath a sold-out Mercedes-Benz Superdome and shocked world-wide audience watching on the WWE Network watched The Undertaker ramble home, legacy set, future uncertain. 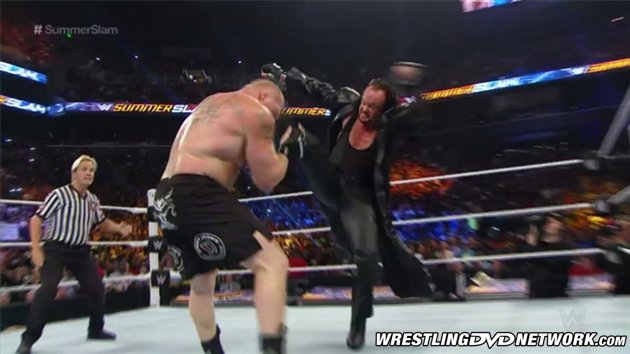 After conquering “The Streak”, the “1” in “21 – 1” set out on an historic run culminating in a 4th WWE title, the first in 12 years. Robbed of the title at WrestleMania 31 Lesnar was poised to reclaim the title from Seth Rollins at Battleground 2015 when “The Phenom” returned for revenge. Again WWE deviated from the format. In this case it was The Undertaker who made the match and went over last on TV yet won on PPV. With a finish as controversial as their WrestleMania match it was Brock Lesnar who was left reeling, looking for final retribution. This marked Undertaker’s one and only victory over Lesnar on PPV and only the third victory overall (Undertaker pinned Lesnar on the Aug. 28 & Oct. 23, 2003 editions of SD!). With the conclusion of this match the stage was set for one final showdown to end the war once and for all.

No one knew in the fall of 2002 that the rivalry between Brock Lesnar and The Undertaker would span 13 years, 9 matches, buckets of blood, sweat, and tears, and would spell the end of “The Streak”. Sunday night, inside “Hell in a Cell”, one of the longest, most bitter feuds in WWE history will end. Win, lose, or draw both men will be forever linked by the matches and moments that have made this one of the greatest rivalries of all-time. After all these men have been through, what will the final act be? How will it all end? Who will prevail? 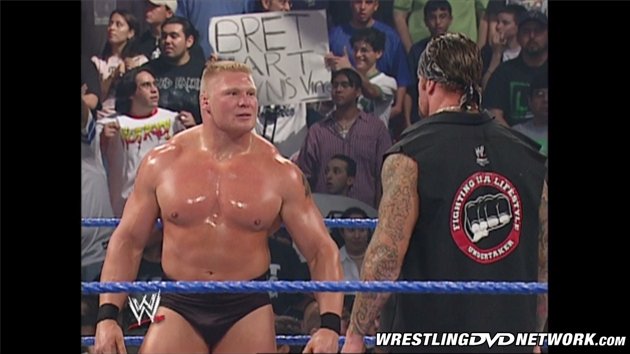 That’s it for this week’s TBT – thank you for reading! Are you a current WWE Network subscriber? If so check out these matches, see them for yourself, and let us know what you think below. And don’t forget to tune into Hell in a Cell 2015 this Sunday, 8pm, on the WWE Network.

Watch all of this content, the upcoming “Hell in a Cell” PPV and more on the WWE Network for only $9.99 per month. Your first month is FREE! Click here to subscribe to the WWE Network.