With the return of Brock Lesnar to WWE TV and Lesnar’s upcoming title match with WWE Champion Seth Rollins at Battleground (this Sunday on the WWE Network), Throwback Thursday is taking a look at the moments and matches that transformed “The Next Big Thing” into “The Beast Incarnate”. This week we’ll be taking a look at one of the most talked about SmackDown! episodes ever, the Sept. 18, 2003 edition featuring Brock Lesnar and Kurt Angle’s “60-minute Iron man Match” for Angle’s WWE Championship. 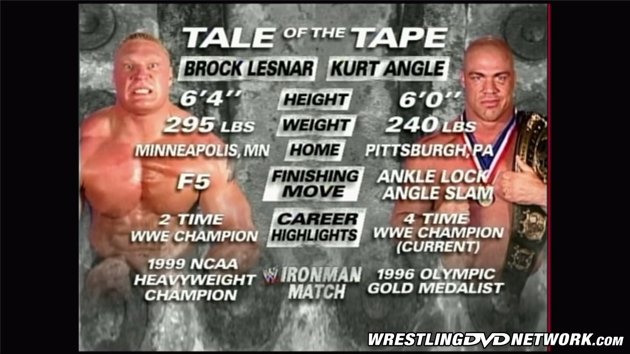 Now the vault is very nearly the most criticized aspect of the entire WWE Network. Not enough of anything for anybody. That’s what people say. The vault, however, is massive. And if you know where to look and what to look for it can not only keep you entertained for months but can even be used to supplement the existing WWE product and even embellish it. This is one such time.

Fortunately for this edition of Throwback Thursday context is not an issue, for the most part. The prior week’s SD! (Sept. 11) is available, as is the previous PPV, SummerSlam 2003. In fact, aside from a few odds and ends, the entirety of the Angle/Lesnar feud is available on the Network. With the housekeeping out of the way, let’s get down to the ring.

CHAMPIONS AT THE TIME (SmackDown! Brand)

SmackDown! #213, the season premiere, opens with Vince McMahon hyping the first-ever “60-minute Iron Man Match” on broadcast TV. The highlight of this segment though is The Undertaker crashing the promo and threatening McMahon for screwing Taker out of the WWE title on the Sept. 4th edition of SD!. McMahon’s facials here are, of course, classic. This was the beginning of the feud leading to the Taker/McMahon “Buried Alive Match” in November at Survivor Series and the end of the “American Bad Ass” incarnation of Taker. 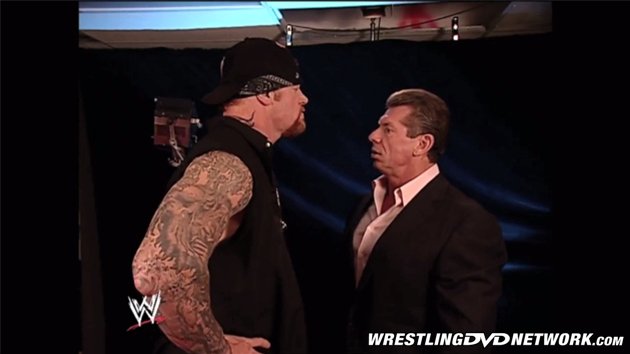 The focus of the entire broadcast is the “Iron Man Match”. The first thing we see after the intro is a boxing-style “Tale of the Tape” which includes finishers and career highlights for both Lesnar and Champion Angle. This was a great era for WWE where the focus on realistic wrestling and athletic excellence trumped just about anything else, as we will see in this episode. The trouble is that not enough of this era is currently available on the Network. In fact for the entire year of 2003, outside of the 12 PPVs, only 3 episodes of SD! are available and exactly zero RAWs.

This is a typical TV tag team match in that it’s two angles in one match, a WWE staple “Then, Now, and Forever”. Here Rhyno and Benoit are feuding while Tajiri and Mysterio are at it over Cruiserweight title. We get a memorable 619/German suplex combo that is worth a look, but not much else in this quickie. The finish comes when a staggered Rhyno gets clipped with the 619 before Mysterio drops the dime, and scores the 1-2-3 at 3:16.

This is essentially an old school squash match in the same vein as Andre the Giant or Haystacks Calhoun. If you’ve seen one, you’ve likely seen them all. For those who are unfamiliar with Shaniqua, check out WWE Tough Enough 2 on the Network. In essence “Shaniqua” was a female mash-up of Brock Lesnar, Big Van Vader, and Scott Steiner. This whole angle stems from Shaniqua crashing the “Bourbon Street Bikini Contest” on the Sept. 4 SD!. The only thing worth watching in this match is the hellacious powerbomb Shaniqua hits on Nidia for the 1-2-3 at 1:41. Afterwards Shaniqua posts Dawn Marie and leaves all three ladies in a heap. 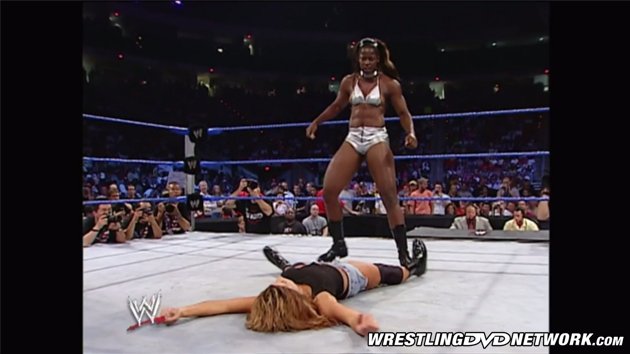 Between matches Mr. McMahon and Sable barge into the office of SD! General Manager Stephanie McMahon to threaten her to quit, as firing would be too good. This angle would culminate at October’s No Mercy in the infamous father/daughter “‘I Quit’ Match”. We also see a couple of decent promos by Los Guerrero and John Cena, the latter atop WWE Headquarters. 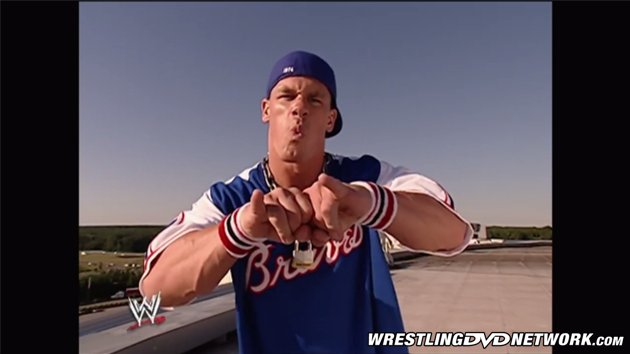 This was the reunion match for “Los Guerreros”. Chavo had been out since May with a torn biceps suffered at a Velocity taping against JR Ryder in Baltimore. At this point Eddie and John Cena were embroiled in a war for the U.S. title while Hass & Benjamin were cleaning out the tag team division. I say all of this because, unfortunately, much of this isn’t present on the Network yet. While the tag team division on SD! was hottest under the direction of Paul Heyman in late 2002 and early 2003, it was still great at this time. And this is a classic WWE Tag Team title match. They don’t do ’em like this anymore, that’s for sure. The finish comes after Hass is dropped on his head and legitimately hurt after a double-team move gone awry. Chavo hits the brainbuster and Eddie lands a picture-perfect frog splash for the 1-2-3 at 9:56 to become the NEW WWE Tag Team Champions.

This match is the story of two halves. In the first it’s virtually all Lesnar, who looks to do everything possible to secure the win by any means. A steel chair gives Angle the first fall at 8:30 via DQ, but Lesnar quickly takes the next two with an F-5 and an ankle lock submission at 10:20 and 12:08 respectively to go up 2-1. A minor comeback by Angle leads to an F-5 on the outside for a count out win for Lesnar at 19:57, making to 3-1. The first half closes with Angle hitting an Angle slam for a pin at 25:54 making it 3-2. 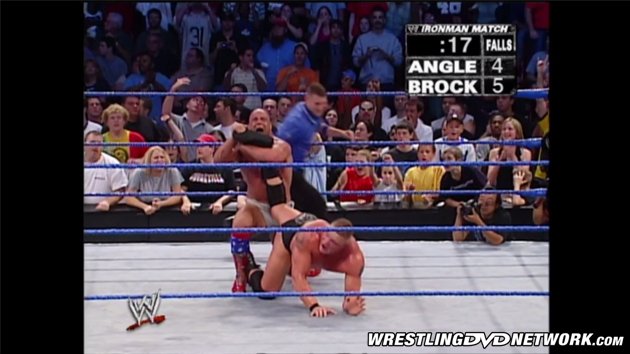 Here the match moves to its second half, which is that of the super hero comeback and flat-out classic. After a belt shot (30:28) and a massive superplex (41:37) Lesnar is up 5 falls to 2. But Angle comes back in vintage fashion and after a top rope belly-to-belly suplex (50:07) and a tap out to the ankle lock (55:50) it’s suddenly 5-4. Lesnar tries to run out the clock, literally, but Angle traps Lesnar in the ankle lock with less than 30 seconds left. Lesnar fights through, doesn’t tap out, and secures his third WWE Championship when time expires. Lesnar clutches the strap, grinning ear to ear, as SD! goes off the air.

The “Iron Man Match” had been in the making for several weeks, and seeing as SD! wouldn’t have another PPV until October this was the most convenient venue for the blow-off to the Lesnar/Angle saga. This match promised to be a classic when it was announced, but after the disappointing match at SummerSlam there were those worried that this match would fail to live up the hype. From the start fans either loved this match or hated it, and for good reason. The classic up-and-up wrestling match that was expected by many of the fans of this rivalry never materialized, and the expected rival to the epic Bret/Shawn WrestleMania XII “Iron Man Match” never came to pass. Part of this had to do with the match being presented pre-taped on TV as opposed to Live on PPV. In fact if one compares this “Iron Man Match” from SD! to the unedited version on the Here Comes the Pain: Collector’s Edition DVD (2012) the matches are very different. The pacing, when seen in it’s entirety, makes more sense, as does the actual structure and story of the match.

This match marked a key turning point in the on-screen career of Brock Lesnar. While Lesnar was still a great wrestler the gimmick shifted to that of an uncontrollable beast who, knowing full well the extent of both strength and skill, would do anything by any means to obtain the ultimate prize. If any match is the bellwether match for the current, 2015 incarnation of Brock Lesnar, this match is it. 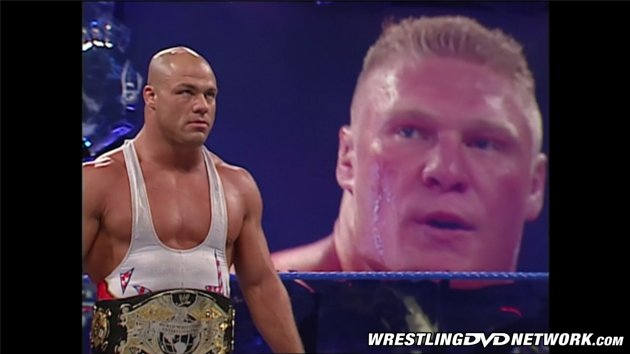 Well that wraps up this week’s journey through the archives of the WWE Network. Make sure to tune in for Battleground this Sunday on the Network, and join me again next week right here at WrestlingDVDNetwork.com for another trip through the vault with Throwback Thursday.

Until we meet again, see you at ringside.