These days not much real history is made in pro wrestling anymore. True firsts are hard to come by. But when Sting meets Seth Rollins for the WWE World Heavyweight Championship this Sunday at Night of Champions (8pm on WWE Network) pro wrestling history will be made. Two months shy of 30 years in the business and with 25 championships in his career from Mid-South/UWF, NWA, WCW, WWA, and TNA, Sting will finally compete for a WWE championship, something few thought was possible even after Sting signed with the WWE in 2014. 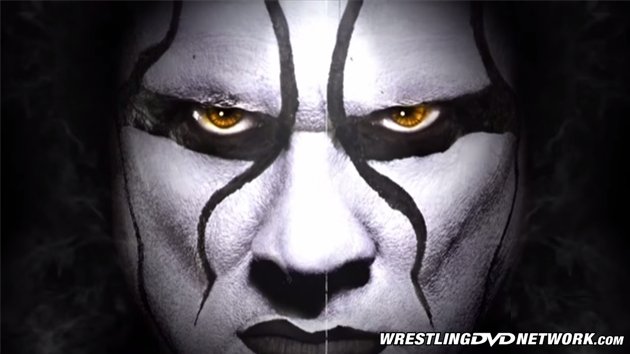 This week Throwback Thursday on WrestlingDVDNetwork.com looks back at some of Sting’s best, most memorable title matches as seen on the WWE Network.

This match marked the long-awaited coronation of Sting as NWA World Heavyweight Champion. Originally set to win the title at May’s WrestleWar ’90 Sting suffered a serious knee injury at the end of February’s Clash of the Champions X, putting the switch (and Sting’s momentum) on ice. This classic bout ended Flair’s 6th reign as World champ at 426 days and marked Sting’s first World title win. Sting would hold the strap for 188 days until losing it back to Flair (Flair’s 7th reign) on Jan. 11, 1991 at a house show in East Rutherford, New Jersey. 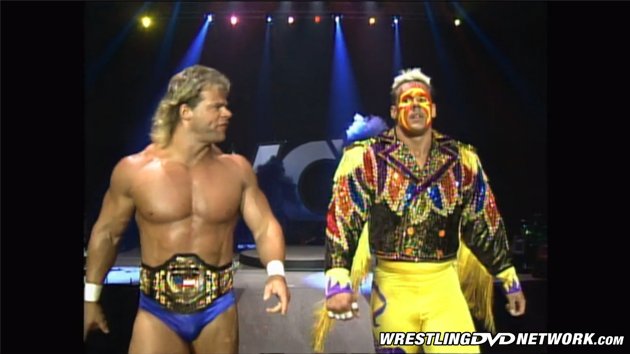 Easily one of the best matches of the decade, this match was a rare babyface vs. babyface title match. The Steiner’s were 71 days in to their 2nd reign as WCW World Tag Team champs when Sting and Lex Luger put their singular ambitions on hold to challenge for the straps. For those curious, the spectacular music video prior to the match is set to Larry Owens’ “Thinking and Feeling”.

Earlier in the night Lex Luger revealed himself to be the man behind the “Mystery Boxes”, attacking Sting and taking the Stinger’s knee out, setting their title match at SuperBrawl II in motion. Rick Rude demanded to be declared the winner by forfeit and be awarded the U.S. title. Instead Sting hobbled to the ring and the fight ensued. This is a prime example of both Sting and Rude’s storytelling ability. This ended Sting’s first reign as U.S. champion at 86 days and was the start of Rick Rude’s epic 419 day run as U.S. Heavyweight Champion. 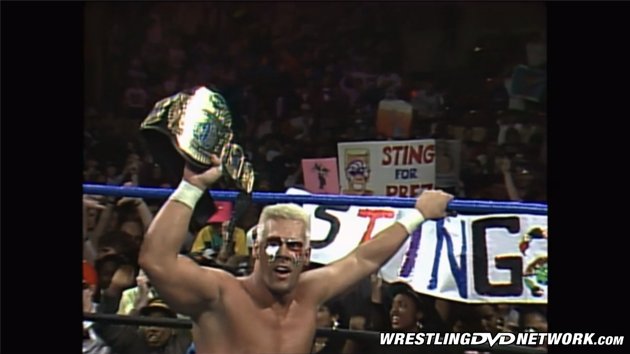 This match, building since COTC XVII, was expected to be WCW’s answer to Warrior/Hogan, but a mismanagement of Luger’s contract forced Sting to sell this match alone in the wake of Starrcade ’91. To make matters worse, Luger left WCW after this match (Luger’s last WCW match until Sept. 11, 1995) for Vince McMahon’s new World Bodybuilding Federation, cancelling any rematch and spoiling yet another Sting coronation. This ended Luger’s first run as World Champion at 230 days and marked Sting’s 2nd World title reign. Sting would hold the title for 134 days before losing it to Big Van Vader at July’s Great American Bash ’92 event, Vader’s first World title win.

Rick Rude suffered a career-ending injury in Fukuoka, Japan on May 4, 1994 when he won the International title from Sting taking him out of the scheduled match against Vader. To cover for the injury Rude was “stripped” of the title for using the belt on Sting to win in Japan. When Sting refused to be handed the belt earlier in the broadcast this match was set. If there was any one wrestler who proved Sting was for real it was Vader. Whenever Sting and Vader met a classic battle was virtually guaranteed, and this is no exception. This marked Sting’s 2nd reign as International Champion (5th World title overall), a reign that would end 32 days later when Ric Flair unified the International and World titles at COTC XXVII. 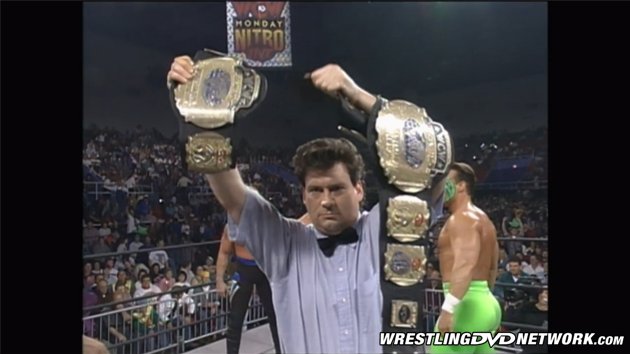 Sting and Lex Luger won their first and only WCW World Tag Team Championship from Harlem Heat 14 days earlier on the Jan. 22, 1996 edition of NITRO. This was the first time Sting and Lex Luger had faced the Road Warriors, who returned to WCW at COTC XXXII, in 8 years. The main story here is the continued mistrust of Lex Luger whose motivations had been in question since his return from the WWF in Sept. ’95. Though the finish is a bit of a let down the match, while it lasts, is fun. Sting and Luger would hold the straps for a total of 154 days before losing them back to Harlem Heat on the June 24, 1996 NITRO, thanks to the nWo.

After winning arguably the biggest World title match in WCW history at Starrcade ’97 Sting was stripped of the title 11 days later and the belt held up until this night. While the finish here is controversial, it’s nowhere near the comedy of errors that marked the end of Starrcade ’97. This would be Sting’s 7th World title win. 56 days later Sting would lose the title to Randy Savage at Spring Stampede ’98. This match also marked the beginning of the end of the original black and white New World Order. 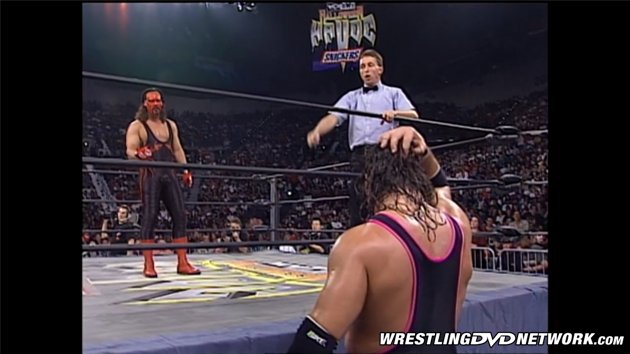 This battle of the sharpshooter vs. the scorpion deathlock is one of only two PPV matches between Sting and Bret Hart. Bret Hart had won the U.S. title from Lex Luger on the Aug. 13, 1998 edition of Thunder (taped Aug. 11th) and was 75 days in as champion when this match took place. This is a decent wrestling match sullied only by a lousy, uninspired finish. While Bret Hart would go on to lose the U.S. title to Diamond Dallas Page the next night on NITRO Sting wouldn’t be seen for another six months.

“Hollywood” Hogan won the WCW World title from Randy Savage on the July 12, 1999 edition of NITRO but shocked the wrestling world by returning to the old red and yellow four weeks later on NITRO. This match was all about trust and respect as doubt still lingered about the authenticity of Hogan’s turn from the nWo. This ended Hogan’s 6th and final WCW World title reign at 62 days and marked Sting’s 9th and final WCW World title win, the last title win of any kind for Sting in WCW. Sting would be stripped of the World title on the Oct. 25, 1999 NITRO following a non-title loss to Goldberg at Halloween Havoc ’99. Despite the interference and the double-cross finish this is arguably the best wrestling match Sting and Hogan ever had.

After WCW, Sting drifted to the WWA in 2002 (where Sting was the final WWA World Champion) before singing with TNA Wrestling in 2003. After winning 5 World titles and one World Tag Team title in TNA Sting left the company and made the move that many thought would never happen when he signed with WWE in 2014. After competing at WrestleMania 31 many expected Sting to ride off into the sunset. Instead Sting finds himself as relevant as ever, ready to compete for the WWE World title. By simply setting foot in the ring this Sunday night Sting will make the kind of history few fans thought possible. Win, lose, or draw, Sting’s legacy is set in steel, a title win this Sunday at Night of Champions, however, would put the future hall of famer in rarefied air in the annals of professional wrestling history. 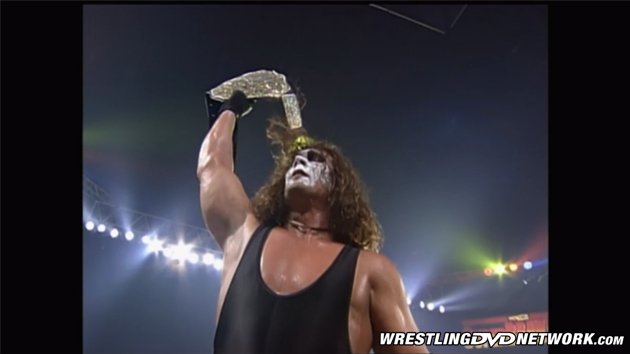 That’s all for this week’s TBT. If you’re a WWE Network subscriber check out the matches, see them for yourself, and let us know what you think. And don’t forget to tune in to WWE Network this Sunday night at 8pm for Night of Champions 2015. And as always, thanks for reading.

Until next time, enjoy the show, and see ya at ringside.