This week for TBT, perhaps the greatest SummerSlam event of them all: SummerSlam 2002. 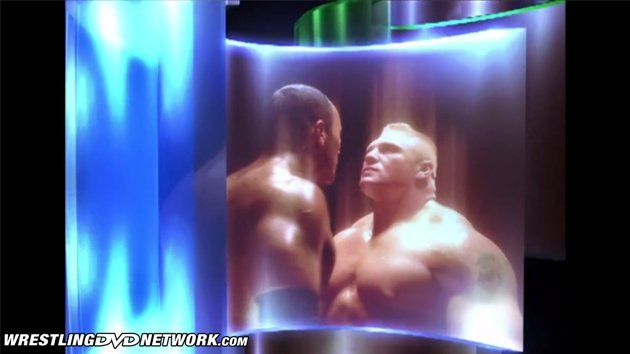 The summer of 2002 was a transformative period for WWE. The “Brand Extension”, begun on March 17, was five months along and making for great TV. Eric Bischoff debuted as the RAW GM on July 15 while Stephanie McMahon was named SD GM just three days later. Then there was the 15th annual SummerSlam. With the long-awaited in-ring return of Shawn Michaels and the coronation of Brock Lesnar, SummerSlam ’02 was the most anticipated “summer classic” since 1999. With a stellar card from top to bottom, including the WWE PPV debut of Rey Mysterio, it had all the makings for a classic WWE PPV. With long-ranging storylines and emotional, personal angles, fans were more invested in SummerSlam ’02 than any SummerSlam in years.

Context is a bit of an issue. There are enough RAW and SmackDown episodes available to give you a feel for the product at the time but the major angles and storylines, like HHH/HBK and Rock/Brock or the debut of the GMs, are largely missing, With that being said, let’s head down to the ring. 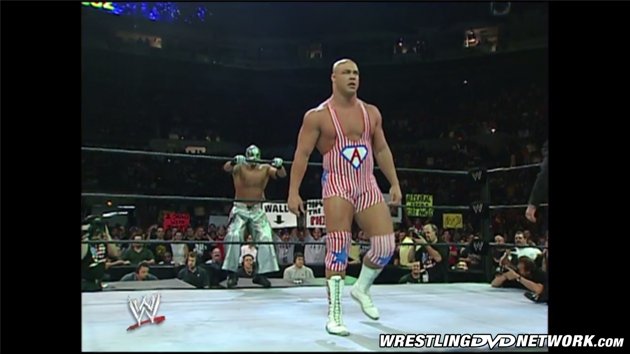 Rey Mysterio made his WWE house show debut in June before finally debuting on TV on the July 25th SD!, an episode currently unavailable on the Network. This is Rey’s WWE PPV debut. The story here was Angle’s push to challenge the WWE rookies. But when Rey, teamed with “rookies” Edge and John Cena, pinned Angle in a 6-man tag match on the Aug. 8th SD! Angle was hell-bent on breaking Mysterio’s ankle. This is one of the finest SummerSlam openers ever and was a defining match for Angle who, despite looking like a giant popcorn box, worked one of his finest matches on this night. The finish sees Angle block a super hurricanrana into the ankle lock for the tap-out at 9:21.

Next we see RAW GM Eric Bischoff in SD! GM Stephanie McMahon’s office where they agree to watch the PPV together.

The story in this one was Jericho’s continued disrespect towards Flair and Flair’s retaliation, which included crashing a Live performance by Fozzy (yes, Fozzy has been around that long) on the Aug. 19th edition of RAW, also missing from the Network. Flair looks ageless in this one. After Jericho mistakenly thought he’d won by submission, Flair goes low on Jericho and traps “Y2J” in the figure-four leg lock to gain the submission win at 10:22. 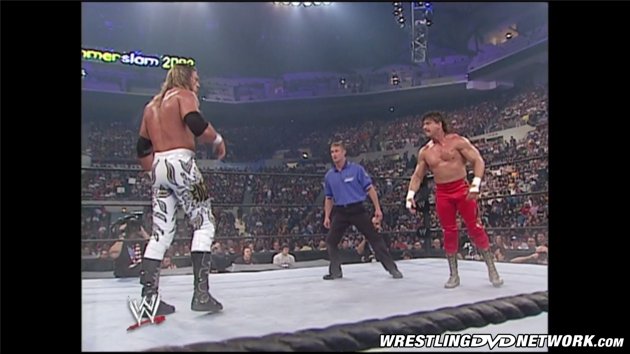 This one is a part of the “rookies” angle on SD!. Edge was still known more for tag team wrestling than singles work but that was about to change. Unlike previous tag stars like Bret Hart or Shawn Michaels, Edge was facing an uphill climb as a singles star. This match went a long ways in establishing Edge, thanks in large part to Guerrero. After a solid back and forth match Edge ducks an Eddie clothesline and nails the spear for the 1-2-3 at 11:47.

Next is an “Our Season Never Ends” promo.

Much of the Un-Americans angle is missing from the Network right now. The story here was Goldust and Booker T wanting to win the titles and bring them back to America. Hokey angle aside this is a tremendous tag title match for the time. In the end, with the referee knocked down, Test interferes and delivers the big boot to Booker T allowing Christian to score the pin at 9:37.

Between matches we go to “The World” in New York City where Nidia makes out with a stranger as Jamie Noble cheers her on. After that we get more Stephanie and Bischoff in the GMs office talking about who will win the next match. 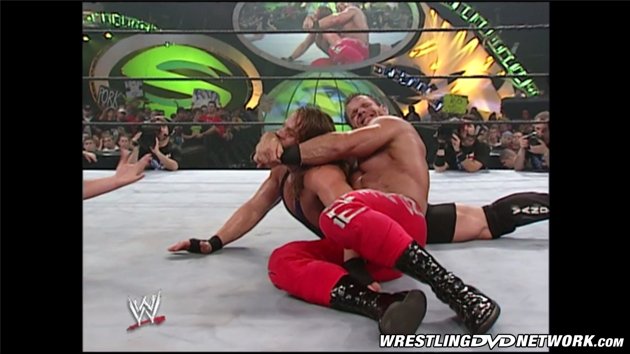 The story here is simple. Benoit won the strap from RVD on the July 19th RAW then defected to SD! later that week, taking the IC title with him. Through some backstage conniving Bischoff managed to sign this match where the winner keeps the strap for their brand. Almost none of this can be found on the Network. This is, as far as matches go, damn good. One of the best IC title matches at SummerSlam in some time. In the end RVD blocks a super back suplex and delivers a huge five-star frog splash to score the win and bring the IC title home to RAW.

In the GMs office Bischoff gloats about the IC title being on RAW until Stephanie laughs in his face and walks out, after which we get a promo package on the Un-Americans.

The angle here was that the late Test, the Canadian, hated America and no one was more American than “The American Bad Ass”, The Undertaker. Let the fight begin. This is a hard-hitting quasi-squash match that is actually quite good, even when Lance Storm and Christian run-in. After kicking a steel chair back in Test’s face, Undertaker connects with the tombstone piledriver and scores the pin. After that, a WWE Shop Zone promo is awkwardly edited out.

Up next is an excellent video package on the HHH/HBK war. 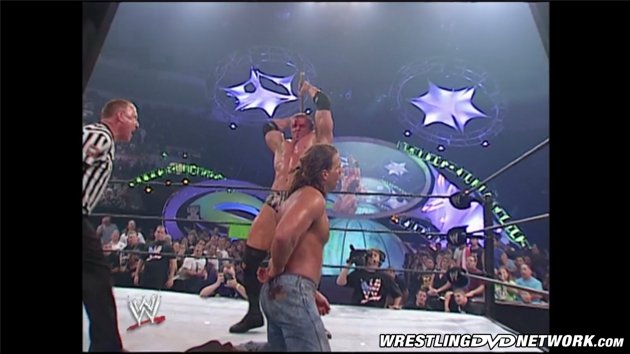 This was one of the most talked-about, most anticipated matches in WWF/E history to date. This marked the first match for Shawn Michaels since WrestleMania XIV and no one knew if it would be the last. As JR says, “This is about pride and passion, evilness and ego.” HBK lured Triple H to RAW only to turn on him. After running HBK’s face through a car window the stage was set for a war of epic proportions, which is exactly what we got. A mixture of a little bit of everything, this match is a bloody, brutal symphony that tells an epic story and is still compelling today. The finish comes when HBK reverses the pedigree into a roll up for the 1-2-3 at 27:19. Afterwards HHH takes a sledgehammer to HBK’s back and HBK is stretchered out.

Next up is the culmination of the Lilian Garcia/Howard Finkel feud that was just terrible. After that we see another excellent video package about Rock/Brock that’s more UFC than WWE. 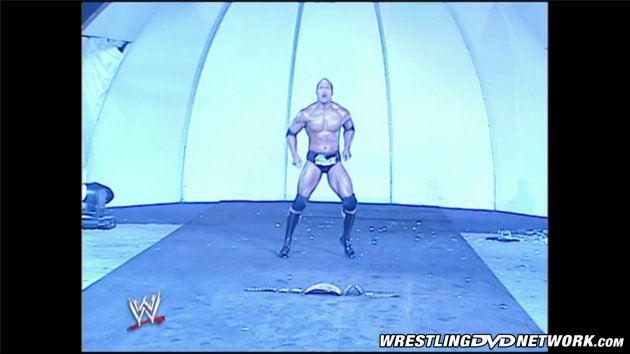 This was one of the most anticipated WWE Championship matches ever. Lesnar was on a legendary run at this point winning the Ric Flair and Hulk Hogan. The Rock was next on the hit list. This match is all about Rock’s speed versus Brock’s power. After a nip-and-tuck bout that looked to go either way Rock blocks an F-5 and attempts to hit the rock bottom twice before Brock hits a stunning F-5 for the 1-2-3 at 15:49 to become the youngest WWE Undisputed Champion in history. It is easily one of the best WWE Championship matches in the 27 year history of SummerSlam. The next night on RAW Lesnar would leave for SD! making the Undisputed Championship exclusive to SD! This would lead to the debut of the World Heavyweight Championship on the Sept 2nd RAW.

While there is great debate as to which SummerSlam was the worst there is generally little debate that the 2002 edition is the best ever. There isn’t a bad match to be found on the entire card. Add to that the historic PPV debut of Rey Mysterio, the in-ring return of “The Heartbreak Kid”, and the coronation of Brock Lesnar and you have an event that may not simply be the greatest SummerSlam ever but one of WWE’s single greatest PPVs ever. It is as good as PPV wrestling gets and one of the greatest shows on all of the WWE Network; an absolute must-see. 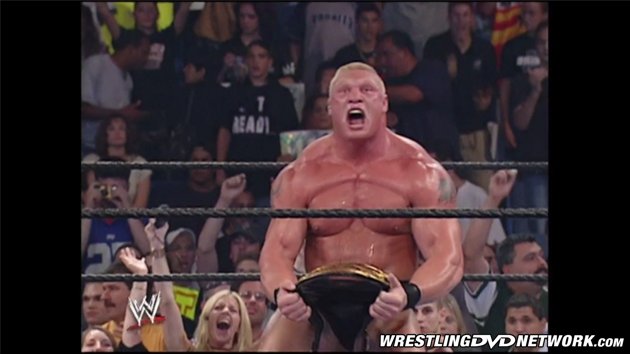 Well, that wraps up another trip through the vault of the WWE Network for Throwback Thursday on WDN. As always thanks for reading. If you are a WWE Network subscriber check out the show, see it for yourself, and let me know what you think in the comments below.

Until next week, see ya at ringside.