Considered one of the best non-traditional Survivor Series ever, the event came at an interesting time for WWE. Little over 20 months since the end of the “Monday Night Wars”, WWE was beginning to choke on its own success. With the audience continuing to shrink in the wake of the demise of both WCW and ECW, WWE decided to create its own competition in May 2002. 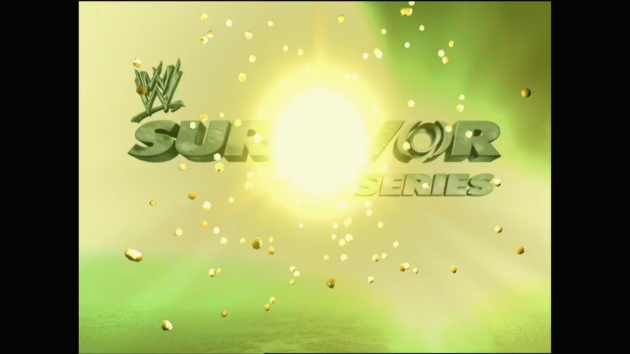 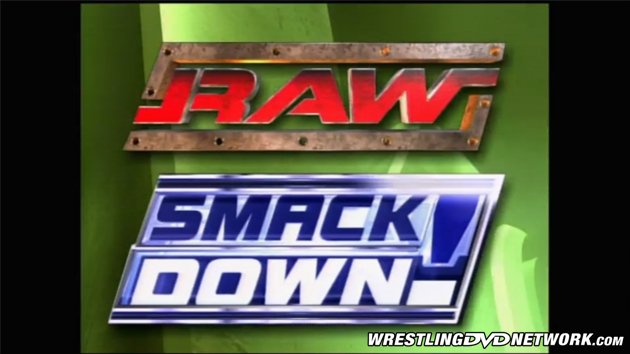 It was a calculated risk that, in the early phases, really paid off. The creative direction and distinct difference in in-ring philosophy between the two brands at this time created a real sense of separation and competition, even if it was all manufactured in-house.

Context is not an issue with this one as all previous editions of RAW and SmackDown!, as well as past PPVs, are readily available to watch on the Network. 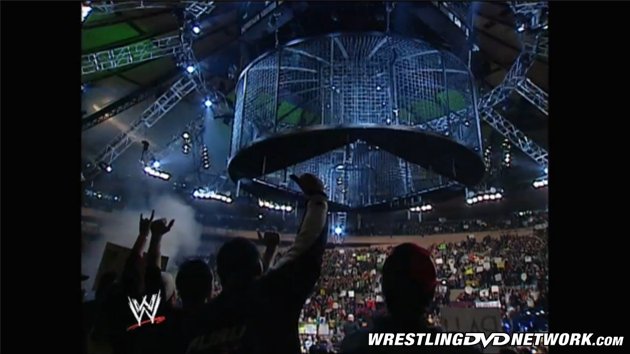 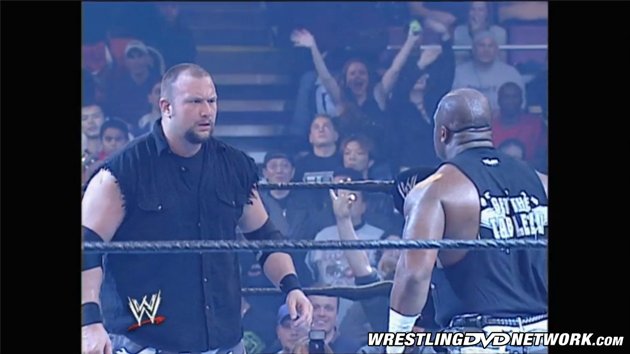 There’s not much rhyme or reason to this ECW-inspired street fight. Spike is the first to be eliminated at 4:26 after a double flapjack/reverse powerbomb through a table in the ring, and it’s all 3 Minute Warning and Rico. Bubba Ray and Jeff Hardy get Rosie alone and laid out on a table, after which Jeff climbs up atop the exit and hits a Swanton Bomb to eliminate Rosie at 7:44 to make it 2-on-2. Jamal puts Jeff Hardy through a table at ringside with a splash from the top rope at 10:34 to make it 2-on-1. Bubba puts Jamal through a table with a superbomb from the ropes at 11:43 to eliminate the future Umaga and make it 1-on-1 between Bubba and Rico. 3 Minute Warning and Rico team up to beat down Bubba Ray until D-Von, who’d been working on SD!, makes the save. D-Von fights off Jamal and Rosie and helps Bubba Ray deliver a 3-D to Rico through the table at 13:54 to win the match.

When it’s all said and done the reunited Dudley Boyz celebrate in the ring to the fan’s delight.

After the match we go back to The World in Times Square where Stacy Keibler introduces a live performance from Saliva, who play the Survivor Series theme song “Always”. Backstage we see RVD stretching ahead of the big “Elimination Chamber” showdown. 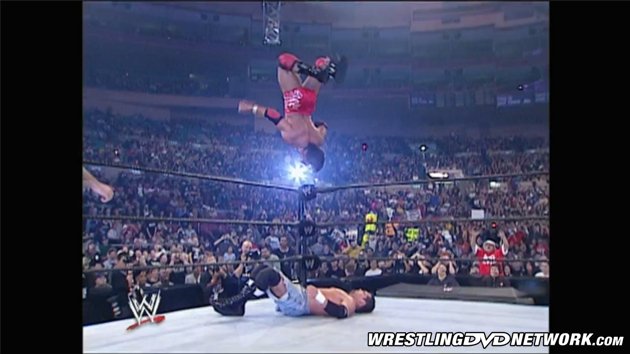 A WCW-like Cruiserweight match, Kidman and Noble pull one big move out after another in an attempt to outdo the other. Noble hits a devastating hanging top rope DDT for a count of two and Kidman responds with an enziguri. When Kidman goes for the shooting star press Nidia interferes and Noble goes up after Kidman. Kidman knocks Noble back to the mat and connects with the shooting star press for the win at 7:30 and a then-record 7th WCW/WWE Cruiserweight Championship win. This marked the end of Jamie Noble’s one and only reign as Cruiserweight Champion at 147 days.

Backstage Kurt Angle watches the monitor and muses aloud that if Kidman can win the Cruiserweight title than he and Benoit could regain the Tag Team titles. On “F-View” we see Victoria doing the “mirror, mirror” shtick. Victoria doesn’t like the answer and smashes the mirror and tears the head off the Trish Stratus cut out before calmly walking away. Next we see a fantastic vignette highlighting the unique Trish/Victoria story. 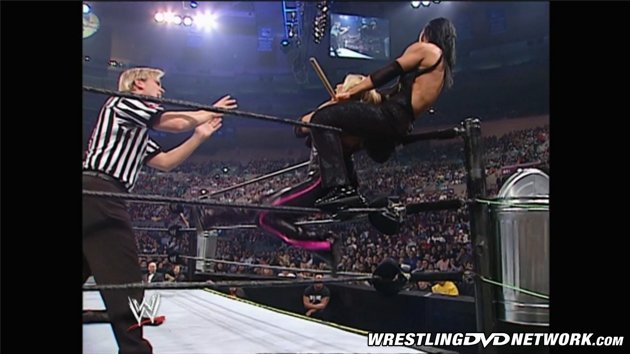 After years of mud wrestling, bikini contests and bra and panties matches the women of WWE were starting to wrestle, and fight. Though the brooms and ironing boards are old holdouts of the “Attitude Era”, the match is nonetheless a fight. The finish was to have involved a mirror, but Trish stepped on it by mistake and broke the gimmicked glass. Unable to use the mirror Victoria struggles with a fire extinguisher before hitting a snap suplex for the win at 7:02, winning the first Women’s title of her career in WWE. This ended Trish’s third reign as Women’s Champion at 56 days.

Backstage Booker T is preparing for the “Elimination Chamber” main event. Next, Coachman interviews RAW GM Eric Bischoff about the Chamber when Big Show pops up behind Bischoff. Show says he’ll prove Bischoff made a big mistake trading him to RAW when he leaves MSG as the new WWE Champion.

Up next we see Brock Lesnar preparing for his WWE title defense against Big Show. Paul Heyman tells Lesnar he’s nervous, but that he’ll do everything in his power to make sure “his client” leaves MSG with the WWE Championship. 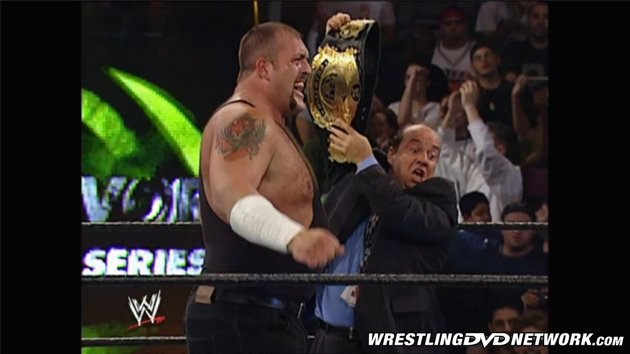 This unpopular angle turned out to be one of the shortest WWE Championship matches in PPV history. Lesnar hits some suplexes, Show shows off his strength, and then the referee gets knocked down. Lesnar hits a massive F-5 on Show and a second referee runs in to make the count. Paul Heyman pulls the referee out of the ring and “punches” him. Lesnar, realizing he’s been swerved, chases Heyman. As Lesnar rolls back in the ring Show meets him with a steel chair to the injured ribs and back, before chokeslamming Lesnar on the chair for the 1-2-3 at 4:20 to win the second WWE Championship of his career, ending Lesnar’s first reign as champion at 84 days.

After the match Big Show and Heyman celebrate in the ring before jogging off to a waiting limo and speeding off. Next we get an excellent vignette highlighting the story behind the “triple threat” Tag Team title match. 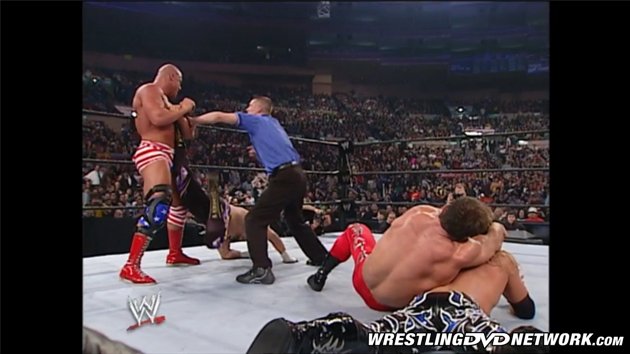 What an incredible match!

It’s largely back and forth early on with everyone getting their chance to shine. As the match progresses, however, it becomes the Angle/Benoit show. But the tensions between the two come to a head when Chavo tricks Benoit in to thinking it was Angle who hit Benoit with the title belt. Edge takes advantage, hits the spear on Benoit, and eliminates Angle and Benoit at 13:09. Angle and Benoit then take out Chavo, Rey, and Edge before arguing their way to the back. Eddie and Chavo try to take advantage but Rey and Edge refuse to give up and pull off an incredible comeback. Rey hits the 619 on Eddie but, as he prepares for the West Coast Pop, Chavo hits Rey in the back with the title belt. As Edge and Chavo fight on the outside, Eddie locks the Lasso from El Paso on Rey for the tap out win at 19:24 to win the first WWE Tag Team title of either man’s career. This marked the end of Edge and Rey Mysterio’s one and only WWE Tag Team title reign at 12 days.

Afterwards we see Kane preparing for the “Elimination Chamber”. In the arena RAW‘s Christopher Nowinski comes to the ring and trashes the MSG fans before SmackDown!‘s Matt Hardy joins him in running down the fans. At the end of the promo the sirens hit, the red beacons flash, and “Big Poppa Pump” Scott Steiner makes his return to the WWE after 8 years (Steiner appeared on the previous night’s edition of Confidential, currently unavailable on the Network, to announce he’d signed a contract with WWE but not revealing on which brand he’d work). Steiner promptly mauls both Hardy and Nowinski before posing as only the “Big Bad Booty Daddy” can.

As the Chamber structure begins to lower in the arena, Terri chases down HBK. Michaels’ promo is interrupted by an “RNN Special Report” from a young, cocky Randy Orton. This is followed by an exceptional video package detailing the story behind the first-ever “Elimination Chamber” match. Triple H is backstage with Coach, saying he’s the object of envy, saying he had a first-class ticket to hell and wants to know who’s coming with him. Next Eric Bischoff comes out and explains the rules of the new match. 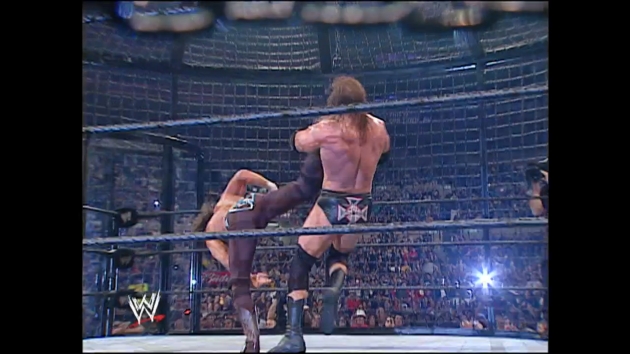 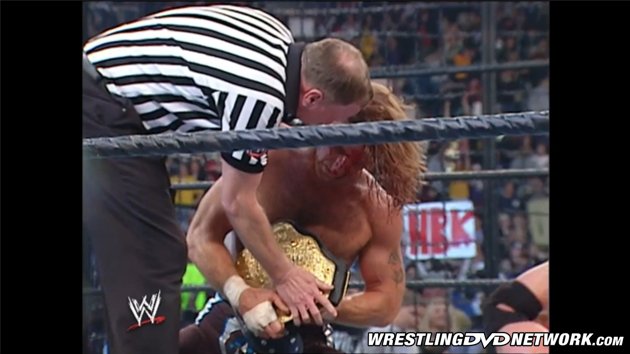 RVD and Triple H start the match out and immediately make use of the “Chamber”, and Triple H is in trouble early. Jericho enters next and immediately gets into it with RVD, working with “The Game” to wear Van Dam out. Booker T is out next, who ends up taking it to RVD and Triple H. RVD climbs to the top of Jericho’s pod for a Five Star Frog Splash but lands on Triple H’s throat instead, legitimately injuring Triple H. RVD then walks into a Booker T missile dropkick and is eliminated at 13:39. Soon enough, Kane enters the match and throws Jericho through the glass of Kane’s former pod. Jericho crawls out of the pod and hits Booker T low, after which Kane hits a big chokeslam before Jericho finishes Booker off with a Lionsault at 17:41.

Shawn Michaels enters last. Kane is eliminated at 22:54 after being hit with Sweet Chin Music, the Pedigree, and a Lionsault. After double teaming HBK, Jericho and Triple H begin to fight over who will eliminate Michaels. Jericho cinches in the Walls of Jericho on Triple H when HBK connects with a vicious Sweet Chin Music on Jericho for the pin at 30:43, leaving only Triple H and Shawn Michaels. Triple H beats HBK all over the Chamber and the match looks all but over, but HBK fights on. After an elbow from the top of his pod, Michaels goes for Sweet Chin Music but Triple H reverses it into a Pedigree. HBK blocks another Pedigree and hits the Sweet Chin Music to eliminate Triple H at 39:21 and win the one and only World Heavyweight Championship of his career, ending Triple H’s first reign as World Heavyweight Champion at 76 days.

JR and King sell the big upset win as confetti falls and the show goes off the air.

Survivor Series 2002, by and large, holds up extremely well.

Every match on the card, aside from the opener and the WWE title match, are classics in their own right, none more so than the WWE Tag Team Championship match, which continues to stand as the greatest Tag Team title match in event history, and the spectacular main event of course. 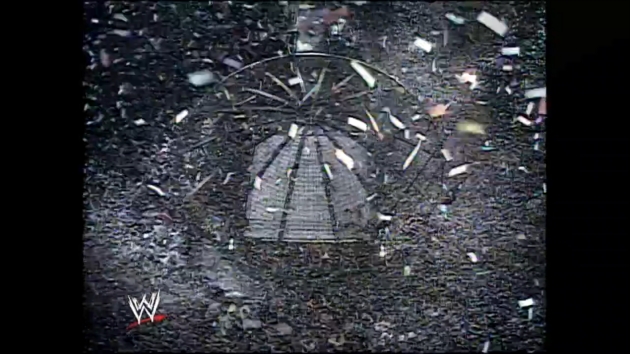 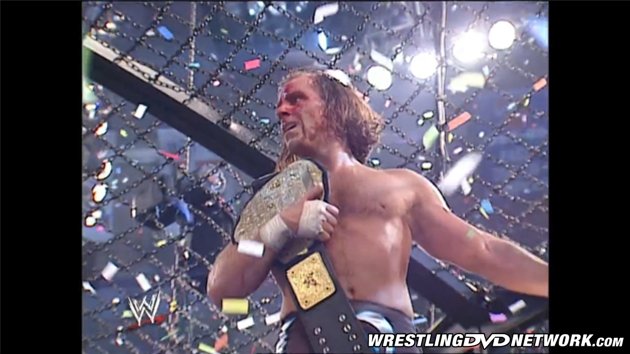 If you’re already subscribed to the WWE Network, you’ve gotta go check out Survivor Series 2002 again before this year’s edition – let us know what you think of it in the comments.

Thanks for reading and until next week, see ya at ringside!

Watch every Survivor Series PPV (including 2016 this Sunday!), and 6,000 more hours of content on WWE Network. Your first month is 100% FREE! Click here to subscribe to WWE Network.