This week Throwback Thursday on WrestlingDVDNetwork.com continues our look back at some of the greatest pre-WrestleMania shows available on the WWE Network and this week it’s one of the most watched events in company history, The Main Event III on NBC.

The last live Main Event special for NBC was, as the previous two before it, the main set-up for WrestleMania. Unlike the previous two editions, Main Event III wasn’t built around a controversial title change or a tag team break-up but as the last test for both WWF World Champion Hulk Hogan and Intercontinental Champion The Ultimate Warrior before their “Ultimate Challenge” showdown at WrestleMania VI. 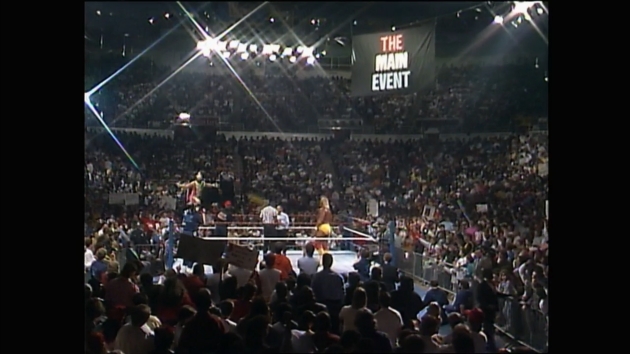 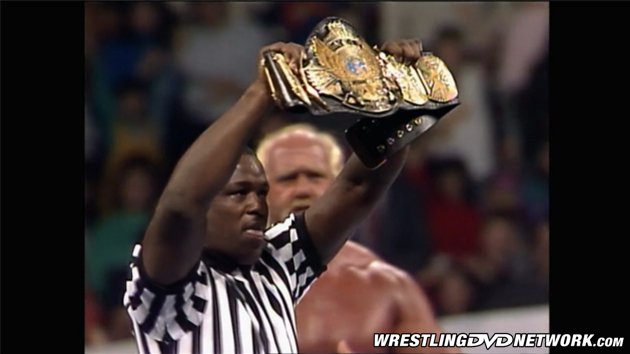 The “Ultimate Challenge” was first announced on the February 10, 1990 edition of Superstars (a series currently unavailable on the Network) with the “title for title” announcement coming two weeks later on the February 27, 1990 edition of Superstars. Instantly the angle and the match-up became the lead story in all of wrestling as two of the biggest “good guys” in wrestling history were signed to face-off with all the gold on the line at the biggest show of the year. That is, if they can get past their opponents on this night.

Originally, as announced at a January 25, 1990 press conference, it was to be then-World Heavyweight Boxing Champion Mike Tyson guest refereeing the Hogan/Savage WWF World title match at this event. However, on February 11, 1990 in Tokyo, Japan, James “Buster” Douglas upset Mike Tyson to claim the World title. In the aftermath Mike Tyson cancelled several scheduled appearances, including The Main Event III, leaving the WWF scrambling to sign “Buster” Douglas to the show, which manager John Johnson made happen.

Mike Tyson would not appear on WWF TV for another 8 years!

Context for this one is non-existent on the Network at the moment. Though all previous SNMEs and PPVs are currently available, none of the weekly TV is uploaded as of this writing.

First we see “Macho King” Randy Savage talk about beating Hogan (and “Buster” Douglas, if necessary) to regain the WWF title. Up next we see WWF President Jack Tunney talking to James “Buster” Douglas about the rules of the WWF title match with Douglas’ manager, John Johnson, and referee Earl Hebner. Lastly, in a vintage Hulk Hogan promo, the “Hulkster” says that if you take the “dynamite tactics” of Randy Savage, the “T.N.T. Punching power” of “Buster” Douglas, and the “super nitro power” of the “Hulkster”, “something’s gonna explode!” 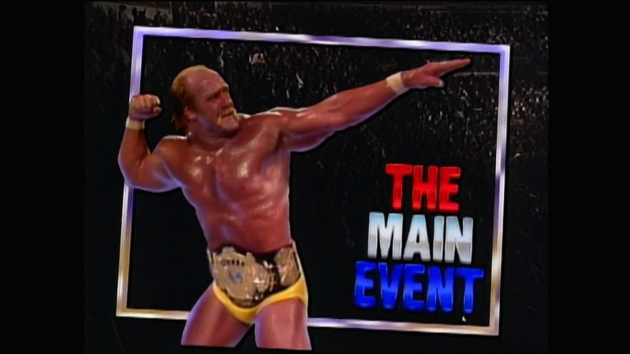 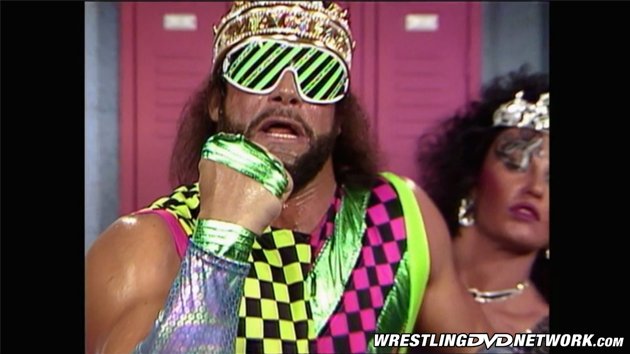 After the classic opening Vince McMahon welcomes us to the show and discusses the card with Jesse Ventura. They talk about Mike Tyson’s management pulling him from the show at the last minute. Jesse says “Buster” Douglas, who “knocked Tyson flat on his butt”, is the only man who could fill Tyson’s shoes.

After a break “Mean” Gene interviews “Macho King” and Queen Sherri about the forthcoming WWF World title match. Savage trashes Tyson for pulling out of the event and threatens “Buster” Douglas to call it down the middle or else. Queen Sherri says that by the time Hulk Hogan gets to WrestleMania VI he won’t be defending the WWF title against Ultimate Warrior because Savage will have the title.

As “Macho King” waits in the ring “Mean” Gene interviews WWF Champion Hulk Hogan backstage. Hogan says he and “Buster” Douglas have a lot in common, that they had to climb their way to the top, have the same values, and the dedication to a cause above themselves. Hogan says that if Douglas doesn’t call the match down the middle, if “Buster” has a steak of the “Madness” in him, Hogan will leave Detroit as “both the World Wrestling Federation Champion – baboom – and the undisputed Heavyweight Boxing Champion, too.”

As Hogan poses in the ring, “Mean” Gene interviews James “Buster” Douglas about refereeing the next match. Douglas says he won the Heavyweight title for himself, his country, and most of all his late mother. Douglas says he’s here to stand up for boxing, that Tyson put his tail between his legs and ran. “Besides,” Douglas says, “they advertised the World Heavyweight Champion and that’s me, not Mike Tyson.” Douglas says he’s going to call it like is and that if anybody “starts shoving their weight around – boom! I’m gonna knock ’em flat, just like Mike Tyson.” Then Douglas gives the ol’ A-OK sign and walks off. 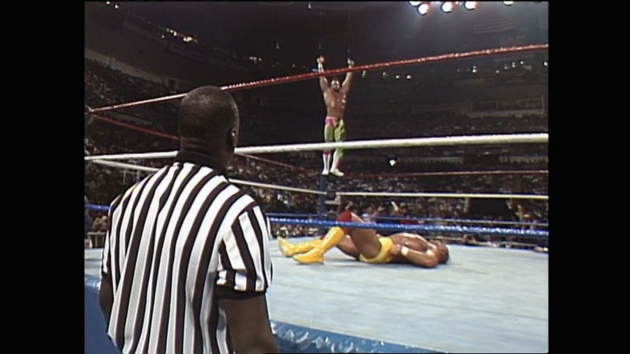 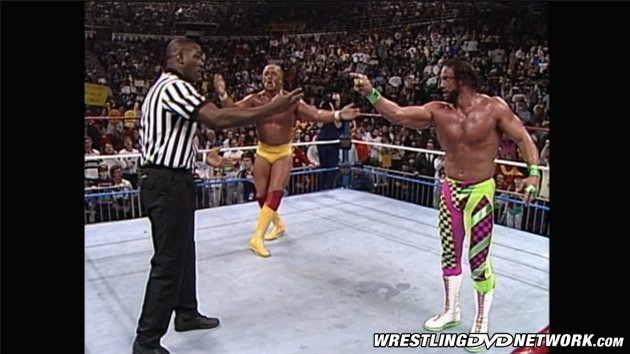 Though the two would face-off in tag team matches at SummerSlam ’89 and No Holds Barred: The Match, this match marked the first nationally televised one-on-one rematch between Savage and Hogan since WrestleMania V. While it’s not the classic from Atlantic City, it’s a fresh, classic encounter nonetheless. After repeated interference “Buster” Douglas sends Sherri to the back as the match turns in Savage’s favor. Eventually Savage hits the big diving elbow from the top, Hogan kicks out, “Hulks up”, and hits the big boot. Savage rolls out of the ring and pulls Hogan to the floor where the two fight. Savage gets in the ring first and when Hogan punches Savage, Savage falls back into the referee. Hogan hits the atomic leg drop and “Buster” Douglas comes in to count the three at 9:53 to ensure Hulk Hogan carries the WWF World Heavyweight title to Toronto for the “Ultimate Challenge”.

After the match Savage confronts Douglas on the count, dancing around Douglas and threatening to throw a punch. Eventually Savage slaps the Heavyweight Champion in the face as he continues to taunt Douglas. At last Hogan pushes Savage into Douglas who lands a couple of sloppy right hooks to drop Savage as the two World Champions celebrate in the ring.

Next we get a promo from The Ultimate Warrior talking about the “cosmic power of Mars, the clouds of Jupiter, the rings of Saturn, the boiling heat of Mercury”. Something’s going to happen, Warrior says. He can feel it. Somewhere Neil deGrasse Tyson is smiling.

With Dino Bravo and company in the ring waiting we go to the back for a second (lucky us) Ultimate Warrior promo with Okerlund. Warrior says he “needs not” earthquake, health, or life insurance, that “the Warriors all know the life that flows in their body is not that of the normals.” The marrow, the blood, the muscles are all of a different consistency and structure, Warrior says. “The brain waves in my mind that the Warriors (snort) speak to is of an unknown frequency.” Warrior says not even Dino Bravo or a natural disaster can prevent Warrior from fulfilling his “ultimate destiny.” 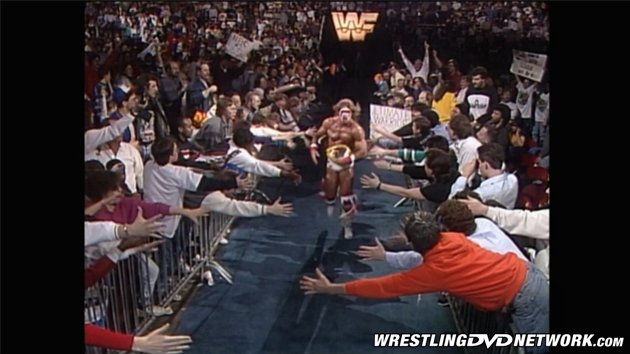 This is about as basic an Ultimate Warrior match as they come with nothing new to see but Warrior stripping Jimmy Hart of his pants under the ring! Dino Bravo takes control after Earthquake slams Warrior on the floor. After Bravo’s sidewalk slam Warrior starts shaking the ropes and making the comeback, hitting three clotheslines before the flying shoulder block and the big splash for the pin at 4:11 to retain the Intercontinental title and make certain the title-for-title “Ultimate Challenge” will indeed take place at WrestleMania VI.

After the match Earthquake and Dino Bravo double-team Warrior. Earthquake lands a few elbows before going to the second rope when suddenly Hulk Hogan runs to the ring and pushes Earthquake off the second rope to the floor where he and Bravo regroup and retreat. In the ring Warrior gets in Hogan’s face about not needing Hogan’s help and the two come nose-to-nose as referees try and separate them. 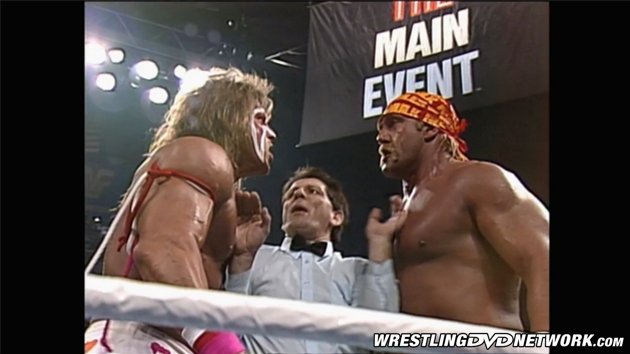 Back from the break, Vince McMahon goes over the history of the Hulk Hogan/Ultimate Warrior feud from the 1990 Royal Rumble, where Hulk and Warrior first hit each other (2:27:56) with the double-clothesline, to the January 27, 1990 SNME XXV, where Warrior accidentally clotheslined Hogan in their match against Mr. Perfect and The Genius.

After the highlights Hulk Hogan tells McMahon that he felt “Hulkamania” at its peak in the 1990 “Royal Rumble” but that when he collided with the Ultimate Warrior it was the strongest force that ever attacked “Hulkamania”, saying he still thinks it was an accident when Warrior clotheslined him on SNME. When asked about coming to Warrior’s aide against Dino Bravo, Hogan says he told everyone after the “Ultimate Challenge” was signed that he didn’t want Warrior touched in any way and that’s why he’s going to “watch his back 24 hours a day until WrestleMania VI. ‘Cause when I beat him, I want him to be at his best.” Hogan says he saw no fear in Warrior’s eyes, that Warrior was ready for battle. Hogan says WrestleMania VI “coulda went down tonight.” 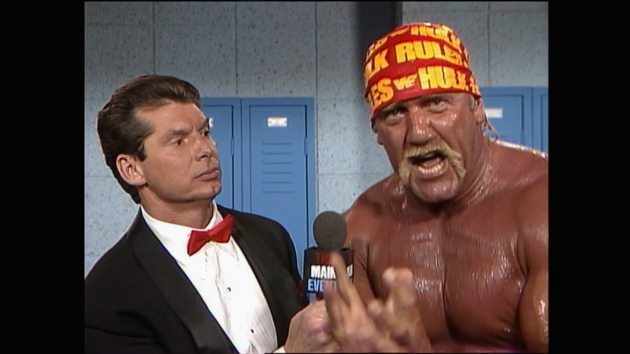 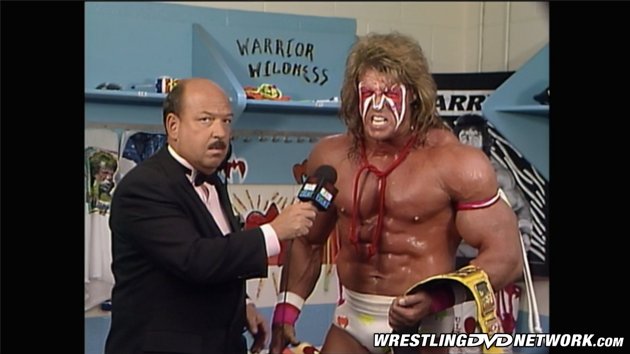 Next “Mean” Gene is with the Warrior for yet another promo. Warrior says what happened tonight was already written. Warrior says when he looked into Hogan’s eyes he saw walls of fear, “fear that ran thick through you, Hulk Hogan.” Warrior says he didn’t need anyone at the Royal Rumble and that the warriors will protect him and lead him to WrestleMania. Warrior points to the wall which has been painted to look like fan art and says the red and yellow colors signify “Hulkamaniacs” questioning Hogan. Warrior asks if Hogan has “what it takes to be the most powerful force in the entire universe?” Warrior says he is the “chosen one” and walks off.

At the conclusion of this episode Okerlund interviews “Buster” Douglas who says he had a “blast” and that Hulk Hogan’s “my kind of guy.” Douglas says he and Hogan are going out drinking; Hogan is a buttermilk man while Douglas is a whole milk man.

Vince and Ventura wrap the show with talk of WrestleMania VI as highlights and a brief glimpse of a wounded “Macho King” close out the show.

Though it only featured two matches and no physical altercation between Hogan and Warrior, The Main Event III set the stage brilliantly for one of the biggest matches in Federation history.

Corny promos and filler aside this edition of Main Event will no doubt stand as one of the first true “Road to WrestleMania” events in company history. 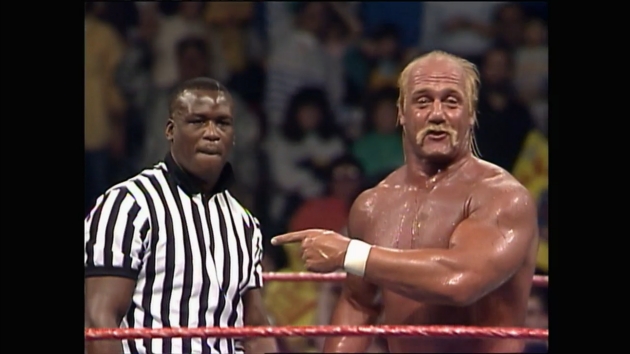 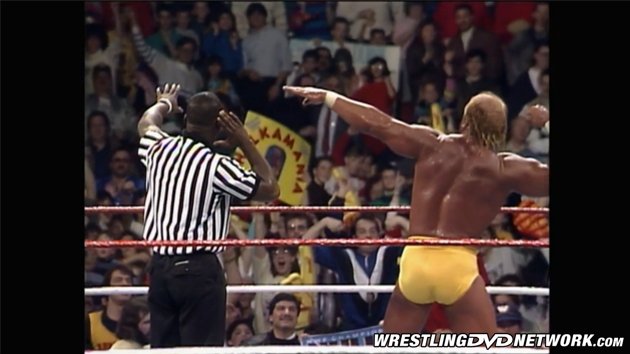 You can check out The Main Event III, and thousands of hours of other classic content, right now on the WWE Network. What are you waiting for? Subscribe today, see The Main Event III for yourself, and as always let us know what you think in the comments below!

Want even more coverage of the Network? Drop by our friends at WWENetworkNews.com.

Watch the good old days, every WrestleMania in history, next month’s Fastlane PPV, and loads more on WWE Network. Your first month is FREE! Click here to subscribe to WWE Network.