15 years ago today the 3rd annual WWF Unforgiven took place from the First Union Center in Philadelphia, Pennsylvania. To mark the occasion Throwback Thursday on WDN is taking a look back at Unforgiven 2000 as seen on the WWE Network. 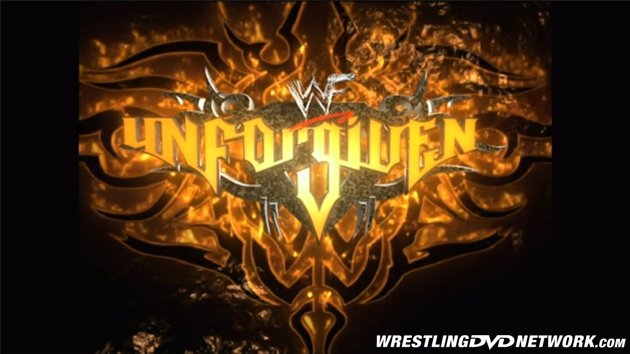 Coming off the heels of SummerSlam 2000, Unforgiven 2000 was one of the most anticipated B-show PPVs in some time. With the Kurt Angle/Triple H/Stephanie love triangle finally coming to a head, the “Fatal Four-Way” WWF title match, a “Steel Cage” showdown between the Hardy’s and tag champs Edge & Christian, and the return of Stone Cold Steve Austin for the first time in 5 months, Unforgiven 2000 boasted the 3rd largest buyrate of the year behind WrestleMania 2000 and Backlash 2000 respectively and garnered the largest buyrate of any of the 11 Unforgiven PPVs.

As for context, all previous PPVs are available on the Network for the year 2000 but only 13 episodes of SmackDown!, ending July 27th, are available as of this writing. 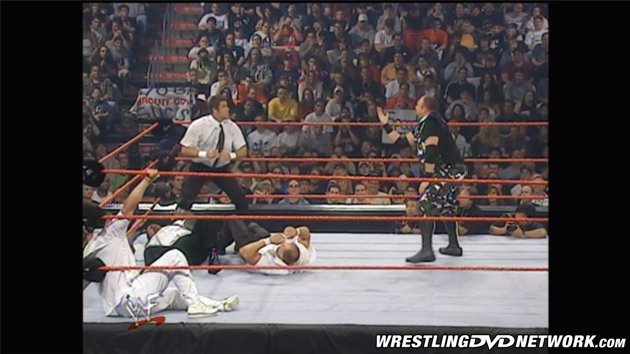 Coming out of SummerSlam 2000 “Right to Censor” (RTC) was one of the hottest heel groups in the WWF. Though the WWF used the RTC as a vehicle to attack the Parents Television Council (PTC) for their denouncements of the WWF’s “Attitude Era” the RTC was about winning by any means. While not a classic this match is by no means boring. The Dudley’s hit their Dudleyville Device on Val Venis only for the Goodfather to break up the pin. As Bubba regroups, Steven Richards connects with the Steven Kick allowing Val Venis to score the pinfall at 6:05.

The story in this one, a rematch from SummerSlam 2000, continued to be Lawler fighting for the respect of Jim Ross after Tazz assaulted JR over comments Ross made about Tazz’s “thug” techniques. This is a stiff, decent fight that makes both men look strong. In the end Raven, returning after nearly 6 years, DDT’s Lawler, allowing Tazz to sink in the Tazzmission for the submission win at 5:05.

Next we see Steve Blackman warming up followed by the arrival of Stone Cold, there to hear Shane McMahon’s evidence regarding the hit-and-run from Survivor Series ’99. Kevin Kelly tries for an interview but gets his ass whipped instead. Michael Cole subs for “King” on commentary as the next match begins. 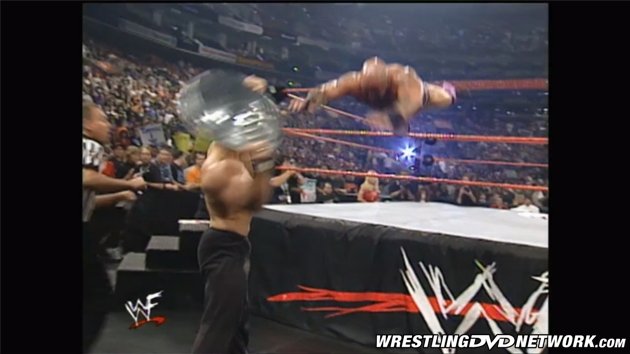 The first attempt at this gimmick match at WrestleMania 2000, a 15-minute “Hardcore Battle Royal”, did not go as planned. This, however, isn’t half bad. The late Crash pins Blackman at 3:54 to win the title but is KO’d 14-seconds later by Saturn who pins Crash at 4:08. Steve Blackman regains the title at 9:20 from Saturn and tries to run out the clock as the others fight over who will pin the “Lethal Weapon”. The time limit expires with Blackman retaining the title.

Kurt Angle runs in to Steve Austin, giving the “Rattlesnake” a mini-gold medal. “I tell ya right now,” Austin says, “I’m gonna store this in a real special place. Right up your ass.” Austin whips Angle’s sorry ass and tosses the medal.

The story here centered on X-Pac attacking “Y2J” with nunchucks and various items over the previous weeks, busting Jericho open. This is a great match from start to finish, telling a great story and employing pitch-perfect psychology. In the end Jericho blocks an X-Pac missile dropkick into the “Walls of Jericho” to score the tap out win at 9:45, with “Y2J” refusing to release the hold for some time. As Jericho celebrates, X-Pac hits Jericho in the back of the head with the nunchucks, splitting the back of “Y2J’s” head open.

Next Commissioner Foley informs Kurt Angle that the upcoming Angle/Triple H match is “No Disqualification”. Stone Cold chats with The Rock in the locker room when “Just Joe” arrives, talking about who hit Austin with the car. For his troubles “Just Joe” gets his ass whipped. 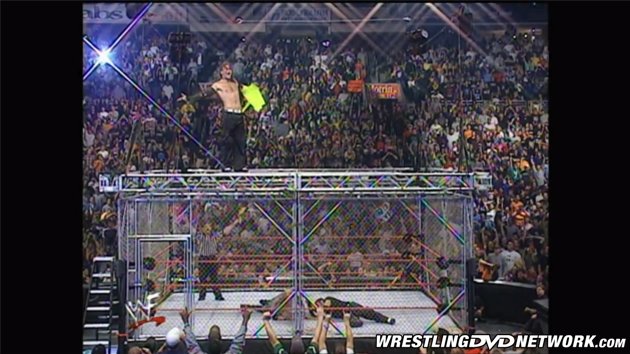 Not much needs to be said about this one. It’s Edge & Christian versus the Hardy Boyz. ‘Nuff said. Jeff falls out of the cage at 2:03 and spends the rest of the match trying to get back in. After a ladder shot Christian falls out at 9:29, leaving Matt and Edge alone in the ring. After Lita runs in and takes out Christian with a hurricanrana from the top of the ladder Matt and Jeff hit Edge with a ConChairTo on the top of the cage, taking Edge out. The Hardy Boyz escape for the win and the WWF Tag Team titles at 13:33.

Backstage Stephanie returns the hat Austin was wearing the night of the hit-and-run while Triple H meets with Commissioner Foley to discuss the refereeing of the match. Back at ringside Lawler rejoins JR for commentary.

The story here was Eddie using Chyna to keep the IC strap. Minutes in, with Eddie in trouble, Chyna interferes in the match leading to Rikishi hitting Chyna with the standing side kick leading to the disqualification at 6:02. After the match Rikishi drops the big banzai drop on Chyna. Eddie grabs the Intercontinental title and then helps Chyna to the back.

Next is an Undertaker promo, complete with chew, followed by Kurt Angle ignoring the advances of Trish Stratus. A video package highlighting the Angle/Triple H/Stephanie love triangle sets the stage for the next match. 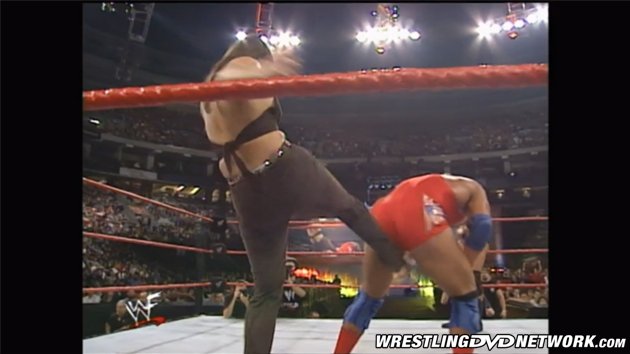 The love triangle that led to more than a few memorable and humorous moments finally came to a head here. The story of the match, however, is Triple H’s ribs and if “The Game” could overcome. This is arguably the match of the night. After 15-minutes of solid, back-and-forth brawling Stephanie makes her choice, kicking Angle in the pills. Triple H finishes it with a picture-perfect pedigree for the 1-2-3 at 17:23.

After the match Shane McMahon comes out and announces it was Steve Blackman who struck Austin with the car based solely on footage of Blackman hitting Shamrock with a car. Blackman comes out to clear his name but is interrupted by Austin who delivers a stunner to the “Lethal Weapon”. Shane celebrates with Austin until Austin wipes out “Shane O’Mac” with three stunners.

— WWF Championship – “Fatal Four-Way Match”
The Undertaker vs. Chris Benoit vs. Kane vs. The Rock(c) 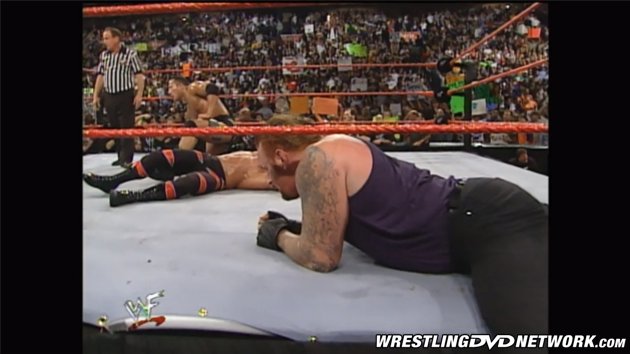 To rectify the number one contender controversy Commissioner Mick Foley made this “Fatal Four-Way Match” for the WWF title. This one breaks down pretty quickly to a four-man street fight. At 7:08 Benoit mistakenly wins the WWF title by pinning Taker only for the match to be restarted by Foley. Taker and Kane brawl at ringside while Benoit and Rock go at each other in the ring. After escaping the crossface The Rock hits the rock bottom on Benoit for the 1-2-3 at 16:05. In the words of JR, “through hell, high water, steel chairs, and chokeslams,” The Rock retained the WWF title.

By September 2000 the Monday Night Wars were all but over. While WCW was struggling to find a coherent creative path, the WWF not only found theirs but had perfected it. Unforgiven 2000 is a perfect example of the brilliance of “Attitude Era” storytelling and psychology, in and out of the ring. 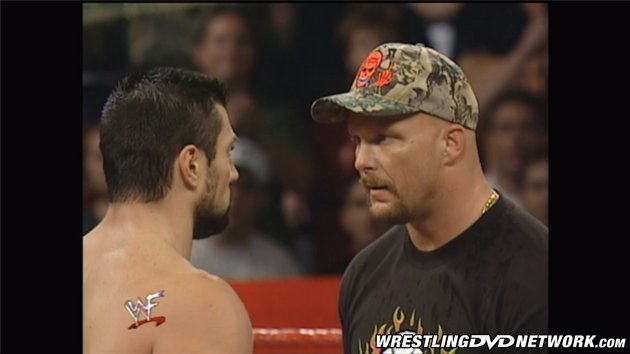 This was the end of an era for the WWF. After 17 years, Sept. 24, 2000 marked the last night WWF TV would air on USA Network until 2006. The move to TNN booted ECW from the national scene and accelerated the extreme promotions demise. The move from USA to TNN, on the heels of the WWF going public, cemented WWF’s position at the top of the wrestling world while WCW continued its free-fall into oblivion.

That’s it for this week’s TBT on WDN – thanks again for reading. If you’re a Network subscriber, check out the event, see it for yourself, and let me know what you think in the comments.