Throwback Thursday: WCW Bash at the Beach 1996, As Seen on WWE Network

20 years ago today World Championship Wrestling ran one of the most important events in the history of professional wrestling, the 1996 Bash at the Beach. Though the “Austin 3:16” promo signaled a new direction for the WWF two weeks prior, it was this event that truly altered the landscape of professional wrestling overnight, changing the business forever in the process. 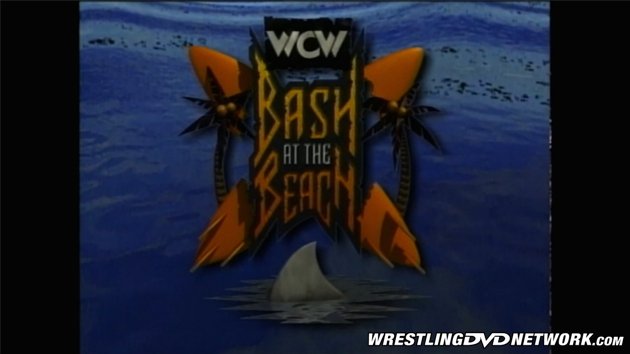 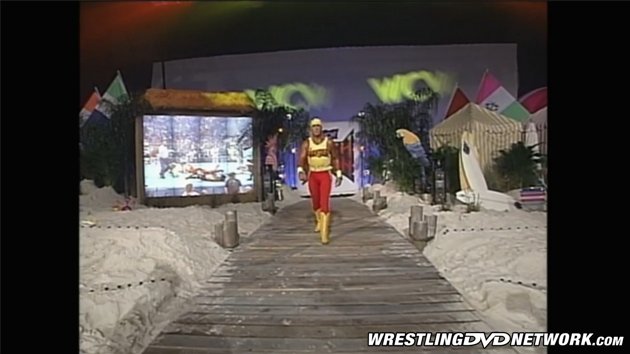 To honor the anniversary of one of the most monumental nights in WCW and pro wrestling history, Throwback Thursday on WrestlingDVDNetwork.com takes a look at just how well this event holds up after 20 years, thanks (as always) to the WWE Network.

Context is not an issue as all previous PPVs, COTCs, and NITROs are available on the Network.

After a short video package Tony Schiavone, Bobby Heenan, and Dusty Rhodes, surrounded by security, talk about the main event and sell the uncertainty of the night, highlighting Eric Bischoff’s absence. 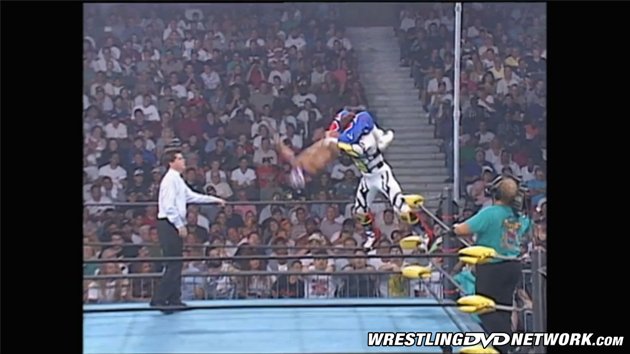 A rematch from their ECW days, Rey Mysterio, Jr. and Psychosis put on an incredible opening match in this one. It’s funny to go back and listen to how lost the announcers were calling many of these moves. What is standard fare today truly was revolutionary on a national level in 1996. In the end, Rey reverses a top rope splash mountain into a crazy hurricanrana for the pin at 15:18 to end a classic opening contest.

After the match “Mean” Gene interviews U.S. Champion Konnan, who explains the finish of the previous match, and talks about the upcoming title match with Ric Flair.

First Bubba shaved half of “Shark’s” head bald (“Shark” left the Dungeon of Doom and dropped all the gimmicks), then Tenta cut off part of Bubba’s goatee. The next night Bubba whapped Tenta in the eye with a sock full of “coins” before shaving off half of Tenta’s beard, setting up this match. This one is a bit odd as it’s two of WCW’s largest wrestlers in a “pole match”, of all things. Done for fun this works to a degree. Eventually Jimmy Hart climbs the pole for “Bubber” but Tenta intercepts “The Mouth”, grabs the sock, and gloms Bubba for the easy pin at 8:53. 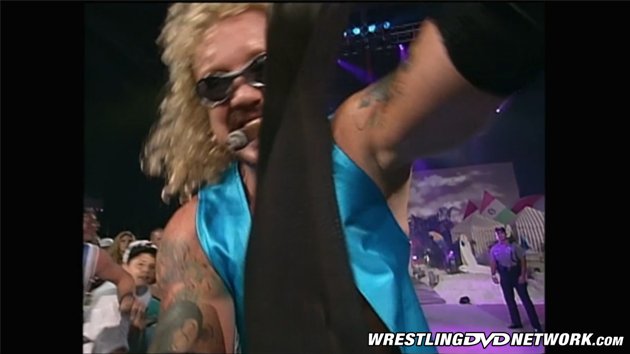 Next we get a promo from The Taskmaster, World Champion The Giant, and Jimmy Hart with Okerlund about the upcoming battle with the Horsemen. Out in the arena the late Lee Marshall interviews Benoit and Anderson.

ECW’s influence is plainly obvious in this match, and that’s saying nothing of The Public Enemy’s involvement. This isn’t as wild as past WCW “street fights” nor as crazy as ECW versions of the same gimmick, but it’s a stiff, fun brawl all the same, and the commentary is fun, as always. The finish is a train wreck when a Botchamania-made table doesn’t cooperate. Sags clotheslines Rocco with the same chain hanging Grunge over the top rope and drops a chain-wrapped elbow for good measure, scoring the pin at 11:27.

Backstage Okerlund is surrounded by security outside of The Outsider’s dressing room. Talk of the identity of the Third Man and the whereabouts of Bischoff have reached a fever pitch. 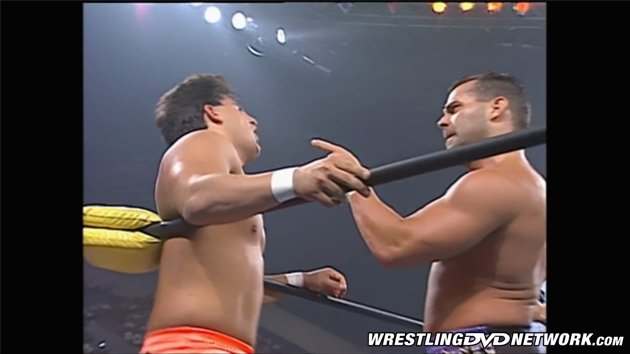 This match in almost entirely Dean Malenko. Disco gets a bit of offense in but not much. The last few minutes are full of false finishes and near-falls that eventually sees Malenko hit the Tiger Bomb before cinching in the Texas Clover Leaf for the submission win at 12:05. The commentators declare it a classic, but it’s anything but.

This was just an excuse to give “Mongo” a bit of ring time. “Mongo” is as green as owl doo-doo but Gomez does a solid job of covering up the flaws. “Mongo” hits the Tombstone Piledriver for the win at 6:45. 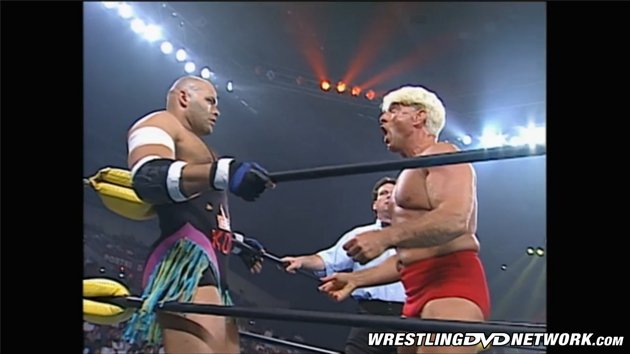 Konnan was not just the U.S. Champion here, but the first AAA America’s Heavyweight Champion and the International Wrestling All Stars (IWAS) World Heavyweight Champion as well. This is a pretty good match. The clash of styles forces Flair to alter the routine and makes Konnan wrestle a more American style, all for the better. Flair is in mega heel mode here, using the ladies at every turn. In the end, Liz distracts the ref, Flair hits a sloppy back breaker, and Woman brains Konnan with the Japanese High Heel Shoe of Doom. Flair makes the cover, with feet on the ropes, of course, to score the pin at 15:40, ending Konnan’s sole U.S. title reign at 160 days. This marked Flair’s record-breaking 6th and final U.S. title reign, Flair’s first since November 24, 1980.

“Mean” Gene is backstage, listening at the dressing room door of The Outsiders. Gene says the Third Man is inside the room and that the Third Man’s voice is muffled but familiar, though Okerlund can’t quite make it out. Heenan suggests bribing a guard to find out. 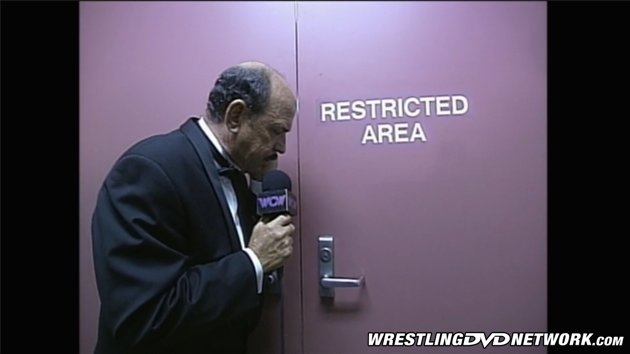 — “Tag Team Grudge Match” – If The Horsemen Win They Earn a World Heavyweight Title Shot on the Next Night’s NITRO (WATCH – 1:56:58)
The Four Horsemen (Chris Benoit & Arn Anderson) vs. The Dungeon of Doom (The Taskmaster & WCW World Heavyweight Champion The Giant) w/Jimmy Hart

The real hook to this match was seeing Benoit and Sullivan fight it out again after their hellacious “Falls Count Anywhere Match” (1:17:55) at GAB ’96 the month prior. The match is built around Sullivan and Benoit fighting, which they do, but not much else. Arn Anderson looked to be a step off on this night. While Benoit and Sullivan brawl towards the announcers, The Giant hits the Chokeslam for the pin at 8:02. Sullivan and Benoit brawl back to the ring where Giant eventually makes the save.

After replays there’s a mediocre vignette setting up the main event. The Outsiders make their way out sans the Third Man. Okerlund hits the ring to ask where the Third Man is but Hall and Nash blow him off. 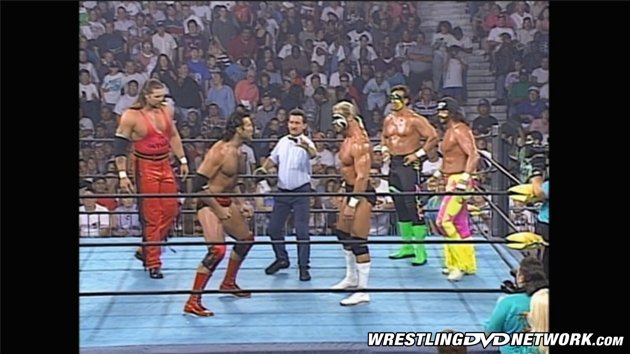 This match is best remembered for the historic swerve at the end and the formation of the nWo, and the action is remembered as a footnote. In reality this match did live up to the hype. While it wasn’t a fight or war it was plenty intense with great timing, perfect psychology, and an anxious energy that still rings true after 20 years. After Luger is taken out and carted to the back it’s a two-on-two affair, and both teams shine. Suddenly, when it looks the bleakest for The Outsiders, Nash goes low on Savage and the match grinds to a halt. Hulk Hogan, who had been MIA from WCW since the April 15th edition of NITRO, comes to the ring, looking like the hero come to save the day. Instead Hogan drops the Atomic Leg Drop on Randy Savage and joins The Outsiders. Hulk drops two more Leg Drops before Scott Hall counts an unofficial three-count.

After the match Hogan shakes the hands of Hall and Nash and the three begin to celebrate. There is an edit, though it’s hard to notice, of a fan running into the ring and having the bejabbers kicked out of him! Garbage fills the ring as “Mean” Gene prepares for one of the most important promos in the history of professional wrestling (2:39:23). Hogan has cut a million and half promos through the years, but this one blows them all away. This heel turn and this promo set the New World Order in motion and set WCW on fire. After the promo Tony Schiavone tells Hogan to go to hell (“straight to hell”) before the final credits roll.

There is no way to undersell how important this event is in the history of pro wrestling.

This angle, the event, Hogan’s heel turn, the scathing promo, helped the wrestling business, still struggling to find itself after the crash of the ’80s boom, find its legs and move into the new frontier. The event itself is one of WCW’s best, with solid matches from top to bottom and a main event for the ages. If you’ve never seen this event from start to finish do yourself a favor and check it out.

You won’t be disappointed. 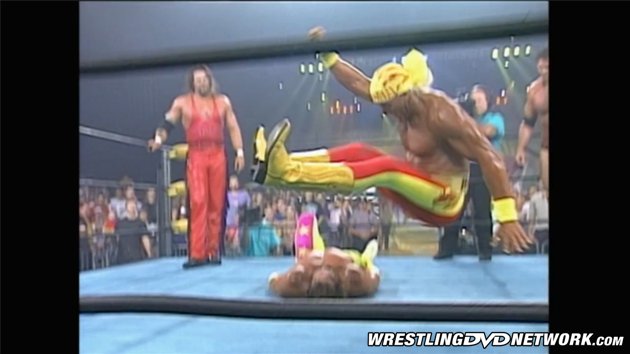 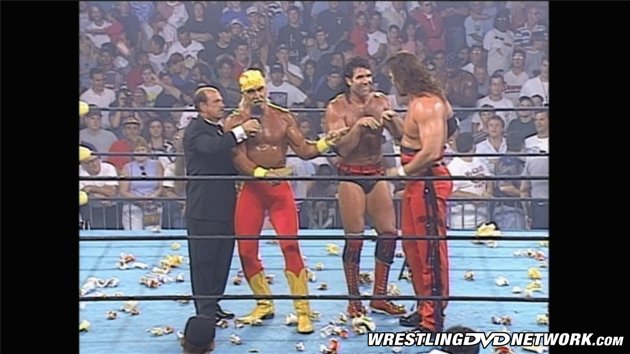 That’s a wrap on this week’s TBT – thanks for reading! Already signed up for the WWE Network? Then check out this amazing event and let us know what you think below.

Be sure to visit our friends at WWENetworkNews.com for more great WWE Network coverage.

Watch the formation of the nWo, the Battleground 2016 PPV, and 5,000 more hours of content on WWE Network. Your first month is completely FREE! Click here to subscribe to WWE Network.