Throwback Thursday: WCW Clash of the Champions XXVII, As Seen on WWE Network

22 years ago today World Championship Wrestling ran one of the most important events in company history: Clash of the Champions XXVII. Featuring the historic WCW TV debut of Hulk Hogan and WCW World title unification match between Ric Flair and Sting, Clash of the Champions XXVII marked the beginning of the end of WCW’s rasslin’ image and the start towards a true national push that would change the course of professional wrestling forever.

To honor the occasion Throwback Thursday on WrestlingDVDNetwork.com takes a look back at this historic event, as seen (you guessed it) on the WWE Network.

Context is a bit of an issue. Though all prior PPVs and COTCs are available on the Network, all prior NWA/WCW TV footage stops in September 1987. 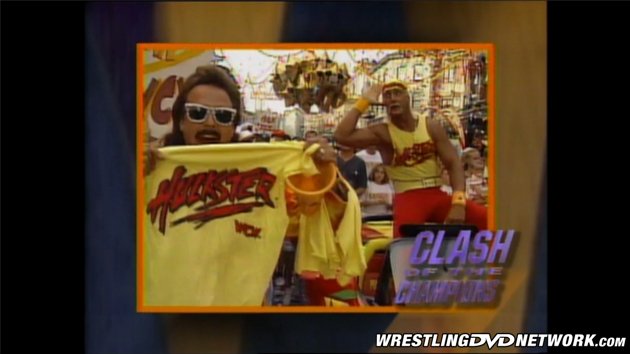 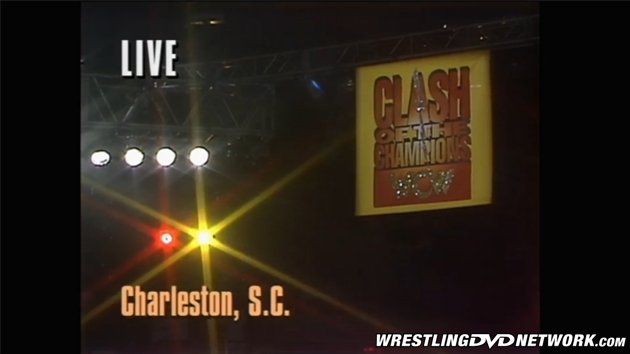 After the usual opening, Tony Schiavone, Bobby Heenan, and Gene Okerland discuss Hulk Hogan’s arrival and the upcoming unification match before talking about who will be Sensuous Sherri’s “man” at the end of the night. 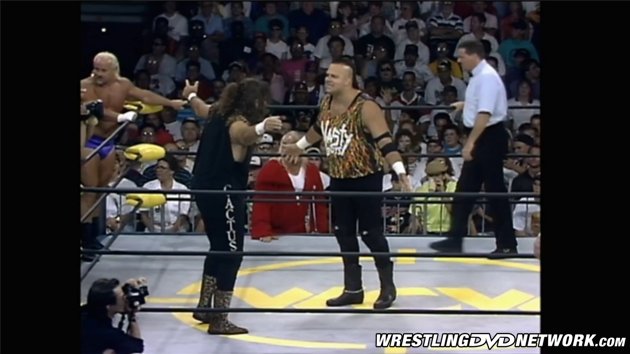 Since these two teams couldn’t seem to keep the action in the ring two referees were assigned to this one. Cactus & Sullivan won the WCW World Tag Team titles at Slamboree ’94 in the wild “Broad Street Bully Match”. While this one is supposed to be a “regular” tag team match it’s nothing short of a “controlled brawl”, as Schiavone describes it. This is a stiff, solid opener that gets the show going on the right foot. After some solid brawling in and out of the ring, Cactus hits the double arm DDT on Brian Knobs for the pinfall victory at 10:36. After the match Sags brawls with Cactus until the referees separate them.

Next up, “Mean” Gean plugs the WCW Hotline before bringing out the WCW International World Heavyweight Champion Sting, who cuts a promo on Ric Flair.

This marked the WCW TV debut of The Guardian Angel gimmick. The late Ray Traylor was working as The Boss when first arriving in WCW but a cease and desist from the WWF brought “The Boss” to an end at the 1994 Spring Stampede event. This one is nothing short of a squash. After a minute of slow action Angel tells Tex it’s three strikes and you’re gone, hits the spinning side slam, and scores the 1-2-3 at 1:45.

After a commercial break we see Hulk Hogan’s motorcade arriving to the North Charleston Coliseum. Heenan can’t help making an O.J. Simpson low speed chase joke. The limo stops and Hogan (with Jimmy Hart) are greeted to more boos than cheers. Not the reception WCW was hoping for for sure. 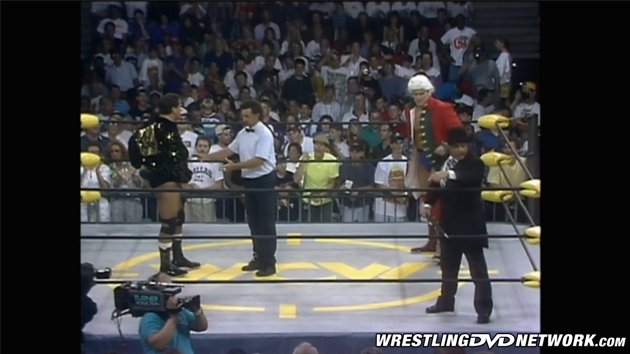 Jesse Ventura joins Schiavone on commentary for this one. This was the culmination of a long story. Zbyszko had won a special challenge match at Slamboree ’94 to earn a TV title shot that Zbyszko won on the May 28, 1994 edition of WCW Saturday Night (currently unavailable on the Network), ending Regal’s 225-day reign as champion, setting up this return bout. This one is a psychological masterclass, for sure, and is more fight than wrestling match, though it features some very solid wrestling. In the end, Sir Williams helps Regal reverse a Boston crab into a pinning position and gets the win with the help of the ropes at 9:26. This ended Zbyszko’s one and only TV title reign at 52 days.

After a commercial break, Okerlund interviews Dustin Rhodes and Arn Anderson. Anderson accepts Dustin’s request to team with “The Natural” in a tag team match against Bunkhouse Buck and Terry Funk at the upcoming Bash at the Beach PPV.

Ventura is still on color for this one, a return match from Slamboree ’94. This one was another classic, psychological encounter, despite the goofy finish, that allowed both men to showcase their talents. After a nip and tuck battle “Stunning” Steve pulls a pair of “knucks” out of his tights, waffles Badd in the breadbasket, and rolls Badd up in an inside cradle to win and retain the U.S. title at 10:21. Referee Randy Anderson comes to the ring, tells Nick Patrick about the “knucks”, discovering them under Austin’s right armpit. In the ensuing chaos Badd school boys Austin for a Randy Anderson counted three-count, but no bell or decision is made. Badd leaves with the gold. Eventually the belt would be returned to Austin and the decision reversed in Badd’s favor by DQ.

After a commercial break Hogan’s new WCW theme hits and the crowd in Charleston is more than split. Hogan and Hart come out for a promo with Gene Okerlund about coming to WCW. Though WCW tried, the boos only get louder. Hogan then challenges the winner of the unification match for a title match. Flair appears on the big screen and gets a huge pop, telling Hogan the “Nature Boy” is the best ever. Hogan does the usual “whacha gonna do” routine and the promo is over. This isn’t Hogan’s greatest promo by any stretch, but it was a strong TV debut for Hogan nonetheless. The mixed reaction form the audience was something Hogan was not expecting, and the look on the “Hulkster’s” face at the conclusion of the promo tells the whole story.

After a commercial break Bobby Heenan and Tony Schiavone introduce a pre-taped Shaquille O’Neal and Hulk Hogan promo that is roundly booed by the Charleston crowd.

The main story in this match is Flair being too distracted by Hulk Hogan to focus on Sting. Before the match can begin Sensual Sherri comes out wearing Sting’s face paint, apparently choosing Sting as her “man”. This match is yet another classic in the annuls of the Flair/Sting rivalry. Despite the arrival of Hulk Hogan hanging heavy over this match these two Hall of Famers put on an intriguing, fresh, outstanding match that had the fans on the edge of their seats. Late in the match Flair pulls Sherri in the way of a Sting leaping crossbody to the outside, wiping Sherri out. In the end, as Sting tries to check on a wobbly Sherri, Flair comes up from behind and school boys Sting for pinfall victory at 17:16. 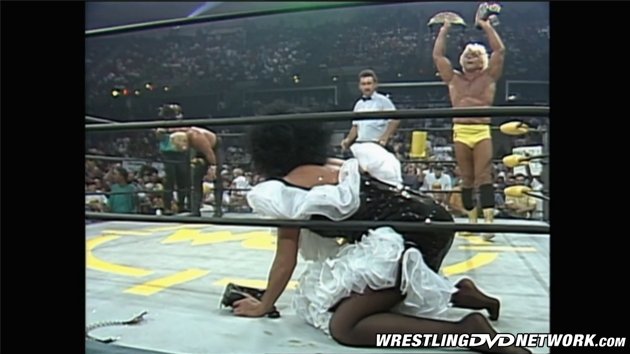 After the match it’s revealed that Sherri is actually with Flair. The two do a number on Sting until Hogan makes the save. Flair ducks the big boot, grabs the straps, and flees the ring. Sherri slaps Hogan in the face right before Flair pulls her out of the ring to safety. As the heels flee to the back Hogan tends to Sting.

After a commercial break Okerlund is in the ring with Hogan, who challenges Flair to a match, saying there’ll be a contract for Flair to sign on WCW Saturday Night. Hogan’s music hits, pyro goes off, and the show goes dark. The 27th edition of Clash of the Champions is history. 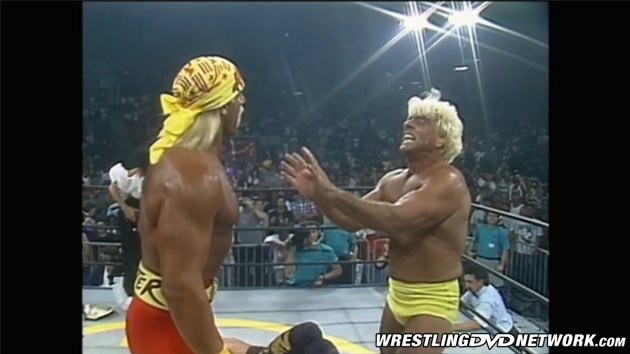 Few WCW events are as singularly important as Clash of the Champions XXVII. Featuring three Slamboree ’94 return matches, two big title changes, and the debut of Hulk Hogan, COTC XXVII was as monumental a show as WCW had run in some time. The next month Hogan would defeat Flair for the WCW World title and the fortunes of WCW would begin to change in a very real way. Clash XXVII is a fun, entertaining show with a little bit of everything to please nearly every taste. If you haven’t seen it in its entirety, I would suggest taking the time to check it out. 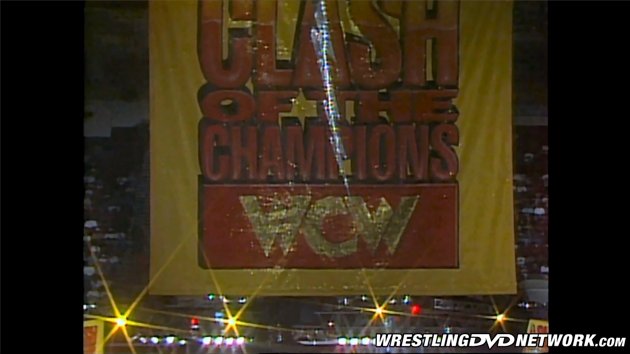 That’s all for this week’s TBT – thanks for reading! Already have the WWE Network? If so, check out this classic COTC event, see it for yourself, and let us know what you think below.

For the latest news on the WWE Network visit out friends at WWENetworkNews.com.