By June of 1997 the New World Order was nearly a year old, and World Championship Wrestling was the reigning king of the wrestling world. If anything, Great American Bash ’97 illustrates just how much of a juggernaut WCW was at the time. With only the Women’s and Tag Team titles at stake (no World, Crusierweight, or United States Championships), WCW produced a must-see card full of bitter feuds and emotional drama. It’s hard to imagine any wrestling promotion today running a major PPV event with out the bulk of their top stars but WCW could do it and do it well in the summer of 1997. Compared with the WWF’s King of the Ring ’97 event the week prior (spotlighted in last week’s TBT), there was no doubt why WCW was winning the war. 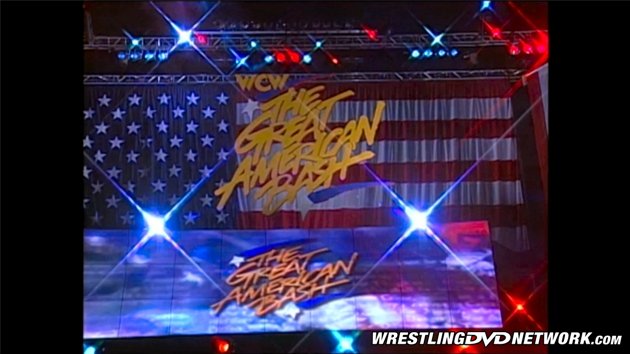 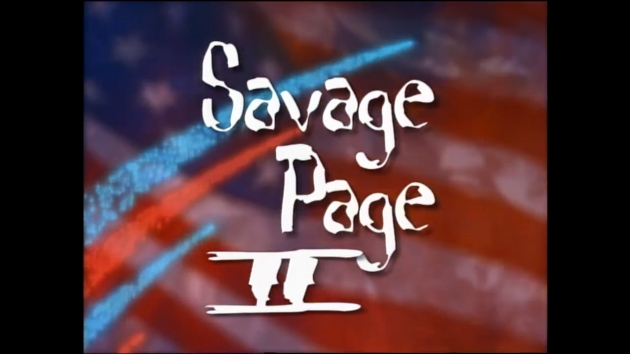 If you’re concerned about context, no worries. All previous editions of Monday NITRO, as well as all prior PPVs, are currently available on the WWE Network.

The show opens with a patriotic vignette selling Diamond Dallas Page as a working class hero in his fight against Randy Savage. Tony Schiavone welcomes us to the show as the pyro goes off and talks with Bobby Heenan and Dusty Rhodes about the two main events, the WCW World Tag Team title match and the DDP/Savage rematch, before throwing it to the ring for the first match. 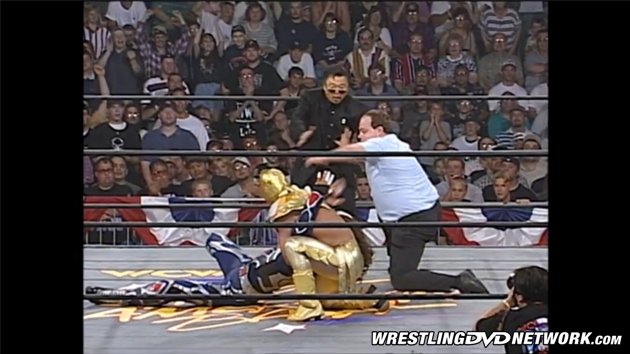 The story here involved Psychosis joining Sonny Oono in Oono’s continued mission of humiliating Ultimate Dragon. Dragon and this match are over big. This one is a classic crusierweight match that is virtually non-stop action from bell to bell. Though the match lacks key elements of traditional psychology it’s far from pointless. In the end Sonny Oono’s continued interference backfires and Ultimate Dragon is able to cinch in the Dragon Sleeper for the submission win at 14:22.

After replays we head to the back where Chris Benoit is participating in a WCWWrestling.com chat about the upcoming “death match” with Meng. Benoit says he wants to do it all on his own. 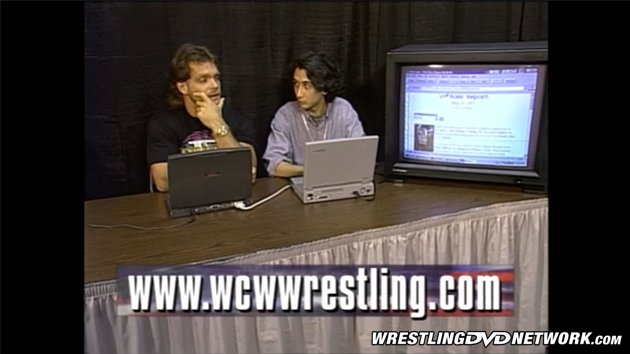 This isn’t one of their greatest matches but it’s good while it lasts. This PPV showdown had been long in the making and was part of the Steiner’s long road back to the tag titles after being swerved out of the straps in the wake of the first Souled Out. Just as Scott Steiner looks like he’s about to win the match the nWo’s Vincent runs in and drops and elbow on Booker T to give Harlem Heat the win by DQ at 12:02, furthering the story that The Outsiders are “scared” of the Steiner Brothers. After the match the Steiners take out Vincent with the Steinerizer.

Former teammates in the Dungeon of Doom, Konnan fired Jimmy Hart and attacked Hugh Morrus at Slamboree ’97 following their loss to the Steiner Brothers. The crowd, hot for the first two matches, is relatively quiet for this one. This isn’t a terrible match, it just feels more like something for free TV than a PPV. Considering this angle was built on one sneak attack after another it’s more than disappointing to see them spend much of the match on the mat working arms and legs. Eventually Konnan blocks the No Laughing Matter causing Morrus to strike his head on the turnbuckle followed by a German suplex that leaves Morrus “unconscious”. Konnan then cinches in the Tequila Sunrise for the knockout with at 10:35.

Next “Mean” Gene Okerlund plugs the WCW Hotline in the aisle before bringing out The Public Enemy for an interview. Rocco Rock questions why Harlem Heat are the number one contender’s. Grunge says their not afraid of anyone. After the interview the two go dancing through the crowd. 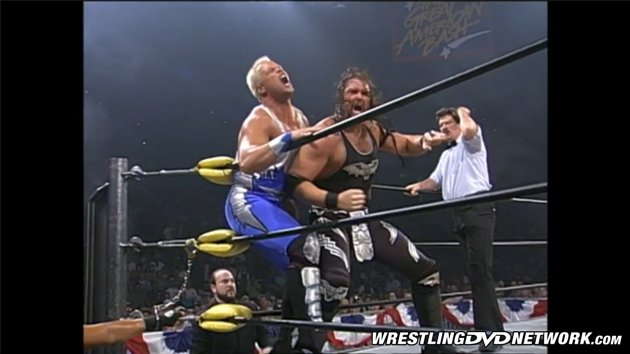 Due to repeated interference Mortis is handcuffed to the turnbuckle to prevent him from getting involved. Though the matches in this feud produced stiff, entertaining bouts, it all boils down to a scrum over possession of a silly Shredder-esque helmet. This one is another stiff, entertaining fight that the crowd gets into for the most part. The stories in this match have to do with Wrath’s disinterest in winning and Glacier’s use of heel techniques to gain an advantage. Late in the match Vandenberg tries to steal the key from the referee which gives Mortis a chance to give Wrath a chain. Of course Mortis tosses the thing halfway across the ring which leads to Glacier using it on Wrath, landing the Cryonic Kick, and scoring the pin at 12:03 to remain undefeated. After the match Mortis gets freed, handcuffs Glacier to the top rope, and beats down Glacier with Wrath until referees come to the ring and break it up. 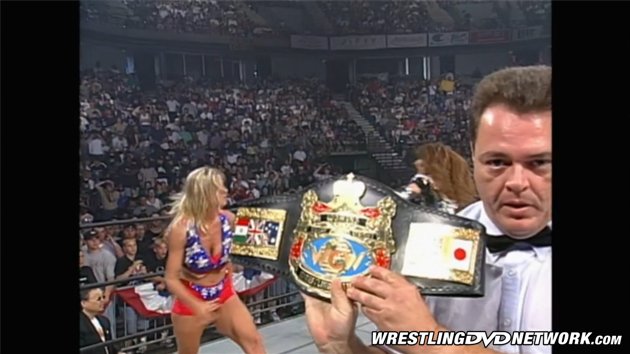 This match effectively marked the end of the WCW Women’s title and division. As I’ve noted in other TBTs, the Women’s division in WCW may be one of the biggest blunders of the era. With the talent on hand, the ability to train others, and the legitimacy that Madusa lent the division there’s no reason why WCW’s ladies division couldn’t have cornered the market before the WWF cheapened it with T ‘n’ A matches. Why Madusa never won the WCW Women’s title, seeing as she came in a champion from the WWF, still mystifies me, as does the complete lack of determination in getting the division off the ground as they had done with the cruiserweights. Either way, this was it. An apparent pay dispute with Eric Bischoff not only nixed Madusa’s in-ring career (for the time being) it killed the entire division.

The crowd, though, is hot for this match, another stiff looking war that is pure action from the bell and arguably the best match in the short history of the division. The match is back-and-forth until Madusa injures her knee jumping from the top rope. Though there’s plenty of hope spots the match rapidly goes downhill for Madusa. Hokuto ends the match, and Madusa’s career, with a crushing Northern Lights Bomb at 11:44 to retain the Women’s title. Hokuto continues to go after Madusa until the referee pulls her away.

After the match the fans applaud Madusa as “Mean” Gene gets in Madusa’s face to ask about retiring. An emotional Madusa pushes Okerlund away as the fans chant for Okerlund to “leave her alone”. 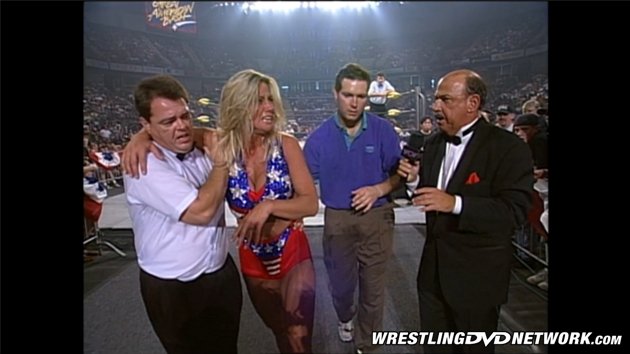 This was part of Jimmy Hart’s gauntlet for Benoit to get through before getting his hands on “The Taskmaster” Kevin Sullivan. In a lot of ways Meng was one of Benoit’s greatest opponents. A stiff, methodical worker, Meng forced Benoit to slow down and make his offense mean something in ways few of Benoit’s future opponents could. This match is a physical and psychological war from the opening bell when Benoit dove through the ropes onto Meng. The story of the match centers on Benoit repeatedly going for the Crossface while Meng simply looks to brutalize Benoit. The focused attack of Benoit wins out with Meng tapping out to the Crossface at 14:58. After the match EMTs, it seems, mistakenly stretcher Benoit out of the arena while leaving Meng to wait for the lone stretcher in the building to return to the ring. Only in WCW…

Next Okerlund is back in the arena wishing all the fathers a “Happy Father’s Day” before plugging the WCW Hotline once more. After the Hotline plug we get a Bash at the Beach ’97 promo featuring WCW World Champion Hollywood Hogan and Dennis Rodman. 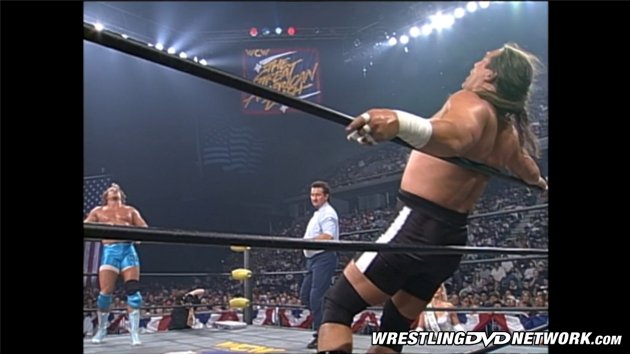 Despite the criticism, Kevin Greene (whose original country music entrance theme has been overdubbed on the Network) took pro wrestling as seriously as football. Though this match is far from a classic, it’s fun, entertaining, and it’s not treated like a joke, as it may have been in the WWF. The crowd, too, is as hot for this match as any on the card. This was a battle that had been brewing for exactly a year since “Mongo” turned on Greene at the 1996 Great American Bash event and joined the Four Horsemen and its the fun brawl many expected it to be. Late in the match Debra distracts the referee while Jeff Jarrett runs down and attempts to hit Greene with the Halliburton but gloms “Mongo” instead. Greene crawls over, covers “Mongo”, and gets the win at 9:22. After the match Jarrett storms off while Greene celebrates with his mother at ringside.

Backstage we see Madusa, in great pain, having her knee examined. 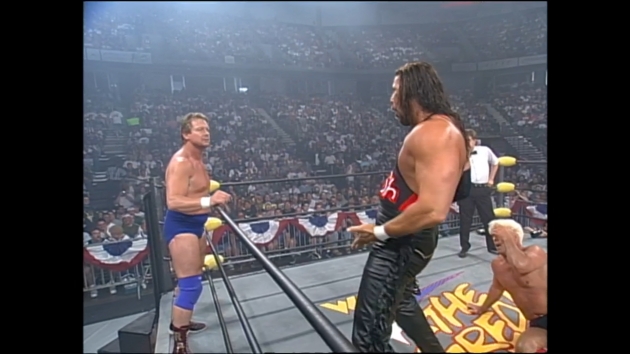 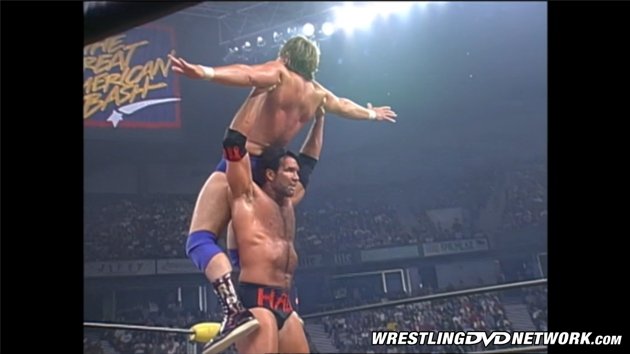 There was far more dirt sheet interest in this match than anything related to an angle. In May, at Slamboree ’97, Piper used his ‘creative control’ to prevent the nWo from going over Kevin Greene, Ric Flair, and himself in the main event. Then, a week prior to this event on NITRO, Piper again broke from the script and, as Nash thought, went into business for himself including calling for the finish early which led to an infamous backstage incident between Kevin Nash and Roddy Piper. No one knew what to expect when the bell rang in this one, creating the kind of realism rarely found in modern wrestling.

Though the match is relatively short it’s packed with fantastic psychology and drama that has the Moline crowd on fire. After Syxx interferes Ric Flair fights with the Cruiserweight Champion to the back, leaving Piper on his own. Piper takes the fight to Nash and Hall before Scott Hall finishes the match with the Outsider’s Edge at 10:03 to retain the Tag Team titles. After the match Piper walks to his corner and wonders what happened to Ric Flair.

Next, Michael Buffer gets in the ring and tells the crowd that the main event is “lights out”, at which time the house lights dim and pyro goes off. I doubt any lights in any building have ever been turned off, and then on again, with such pomp. To the younger fans, yes, this kind of thing really did make fans pop. Why? Your guess is as good as mine, and I lived through it! 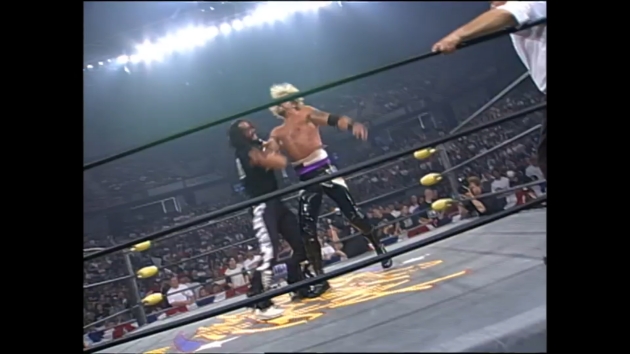 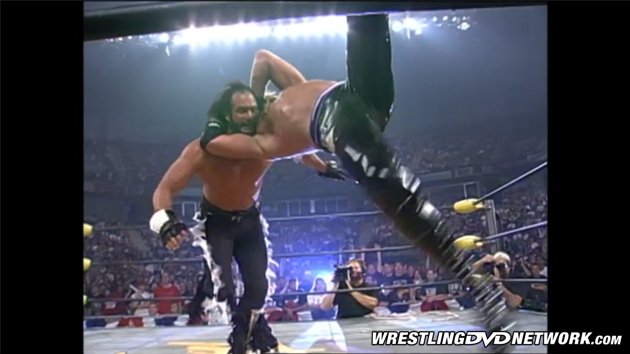 DDP comes through the crowd and gets this one going before Michael Buffer can finish the introductions. This match is an all-out war from start to finish. These two brawl in and out of the ring, around the fans and through them, and damn near out of the arena itself, using plates, a charcoal grill, crutches, chairs, and flower pots on one another along the way. Savage takes out three referees (including a devastating piledriver to Mickie Jay!) before DDP hits the Diamond Cutter on Savage. Nick Patrick crawls into view to make the count when Scott Hall runs down and stomps Patrick in the back of the head. DDP fights off Hall only for Savage to waffle Page with Hall’s Tag title belt. Hall hits DDP with the Outsider’s Edge before Savage comes off the top with flying elbow drop for the win at 16:57.

The nWo music hits and Savage is helped up by Hall as the show quickly comes to an end without any replays or closing thoughts.

For me this marked the last truly great Great American Bash in WCW.

The event featured a number of good to great matches, with a lone exception being the Konnan/Hugh Morrus match, and two main events that have held up extremely well 20 years later. 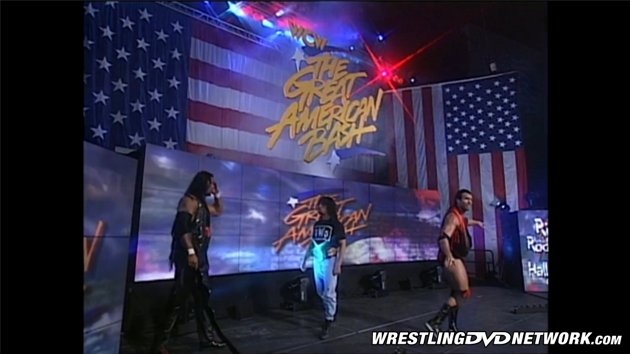 If you haven’t seen the PPV I would highly recommend it. If you have, it’s just as good today as it was in 1997 and definitely worth another viewing. Currently subscribed to the WWE Network? Then you can enjoy the 1997 Great American Bash right now.

Watch every Great American Bash, Money in the Bank 2017, and over 8,000 more hours of content on the WWE Network. Your first month is FREE! Click here to subscribe to the WWE Network.