It’s been 15 years since WCW Monday NITRO went off the air, leaving a lasting void in the landscape of professional wrestling. This week Throwback Thursday once again delves into the WWE Network vault to look back at a classic edition of NITRO that took place 19 years ago today: the go-home show before the 1997 edition of The Great American Bash. 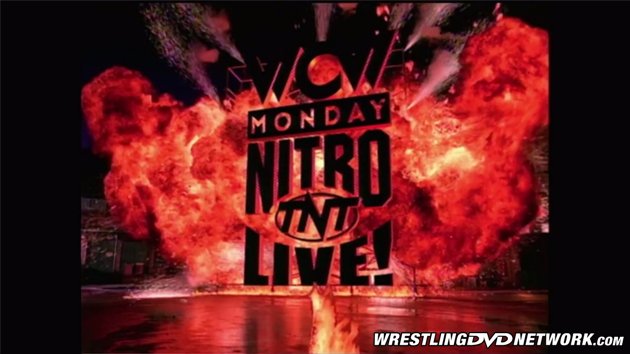 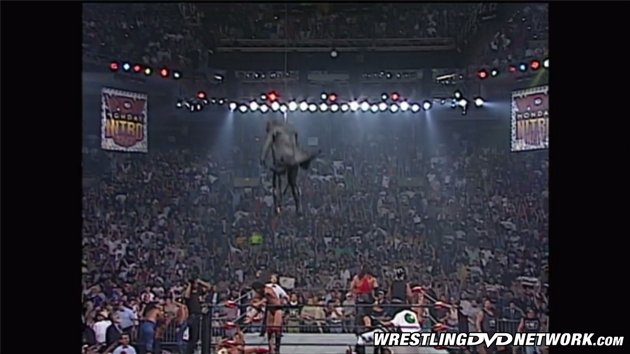 World Championship Wrestling was truly firing on all cylinders at this point in 1997. 49 weeks into their legendary 84-week winning streak over the World Wrestling Federation’s flagship show Monday Night RAW, WCW would make it 50 straight with this stellar card from Boston.

Context is not an issue in the least here as all previous editions of NITRO, Clash of the Champions, and PPVs are present on the Network. So strap yourself in, this is going to be a wild ride… 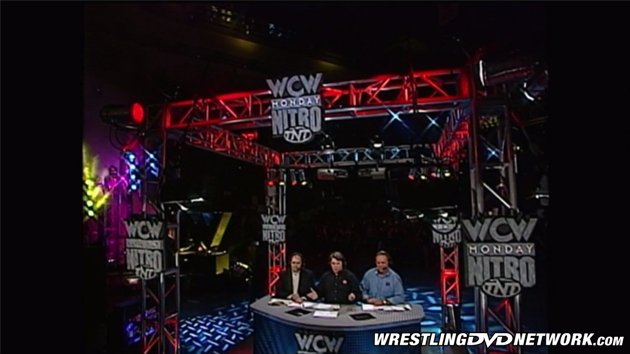 After the usual open, Schiavone, Tenay and Zbyszko are at the desk. Schiavone says “it’s official”, Dennis Rodman and Hollywood Hogan will be teaming up to compete at July’s Bash at the Beach PPV against opponents TBD. We also get the big announcement that The Outsiders will be squaring off against Ric Flair and Roddy Piper in a non-title match in the main event of this NITRO – just six days before they would go on to meet for the gold at the PPV.

In the back, Randy Savage and Liz arrive and are ambushed by DDP. Liz slams the door on Page’s ribs, setting up the injury angle going into Savage/Page II at Great American Bash. 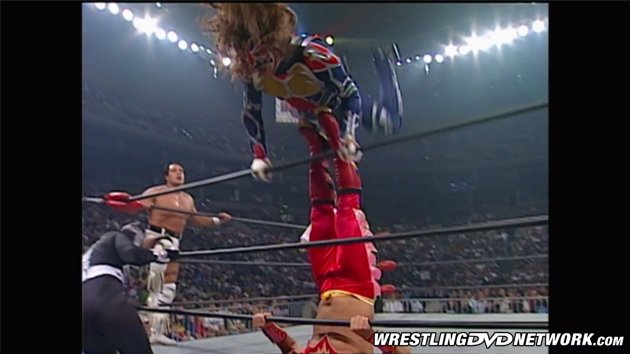 This match, Silver King’s WCW TV debut, is a lot of fun. A little slower than some of the other “Trios” to start, but it ends in typical spot-fest fashion. With everybody else wiped out on the floor Dragon hits a top rope hurricanrana on Psychosis and sinks in the Dragon Sleeper for the submission at 7:46. Post-match Psychosis beats up Super Calo with a wooden chair until Juvi makes the save.

Next up, “Mean” Gene interviews Lex Luger who says that he and The Giant will face Rodman and Hogan at Bash at the Beach in July. Luger then tells Okerlund that the “Executive Committee” has granted “The Total Package” a match with Hogan later in the show.

After a break we see Mike Tenay outside the Fleet Center meeting the arriving Ric Flair and Roddy Piper who cut a promo about the upcoming main event match against The Outsiders.

Jericho had just returned from a tour with New Japan, working NITRO for the first time since April 21st. This one is virtually all Wright. It’s not a bad match, just a little too one-sided for my taste. In the end, Wright reverses a springboard crossbody and, with the help of the ropes, gets the pin at 8:17, marking Wright’s first NITRO win since February 3rd. 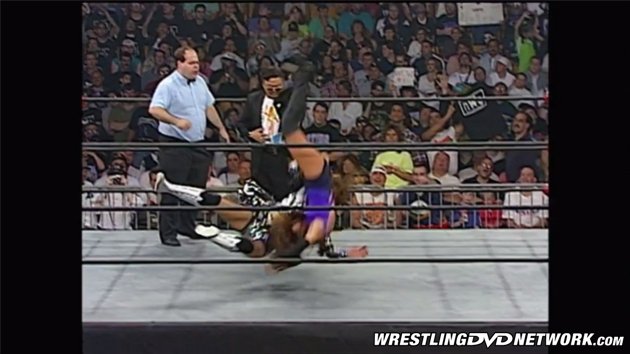 This was a squash. Hokuto, prepping for the “Title vs. Career” match against Madusa at GAB, looks as strong as ever. After some interference from Oono, Hokuta blasts Hosaka with a devastating brain buster for the win at 1:44. Post-match Hokuto hits Hosaka with another brain buster before Madusa makes the save, hitting three German suplexes on Hokuto. This was Hokuto’s last TV match in WCW. The Women’s title, and Hokuto, would be abandoned following the GAB PPV.

After a break “Mean” Gene interviews The Steiner Brothers about the tag title picture when Harlem Heat come out. The two teams fight until referees pull them apart, setting the stage for their number one contender’s match at Great American Bash.

This match never got started. As McMichael comes out Kevin Greene, “Mongo’s” opponent at GAB, gloms “Mongo” and they fight until security pulls them apart. In the ring Konan is down, a broken broomstick by his side, apparently attacked by Hugh Morris.

NO WINNER declared (No Contest) 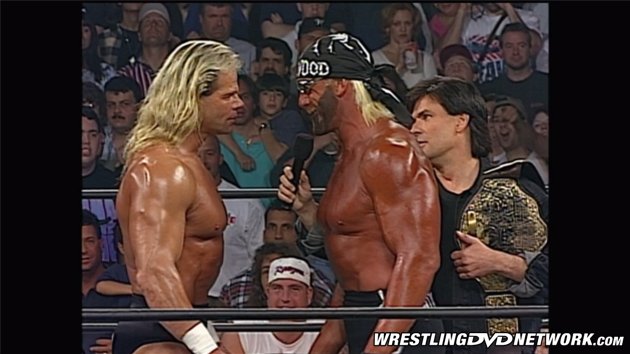 Prior to the match Hogan and Bischoff cut a promo, saying there’ll be no match. Luger comes to the ring, referee in toe, and surprises both Hogan and Bischoff. Luger knocks down Bischoff and the bell rings, bringing Hall, Nash, and Syxx to the ring. This one is a fight. Luger avoids Hogan’s big elbow, takes out the nWo and lifts Hogan into the Torture Rack for the submission win at 2:53.

After the match the nWo attack Luger, with Hogan dropping eight Atomic Leg Drops on Lex as the fans chant for Sting. After Luger is helped from the ring, Hogan and Bischoff lay down in the ring and cut a boring promo about the tag team match at Bash at the Beach. 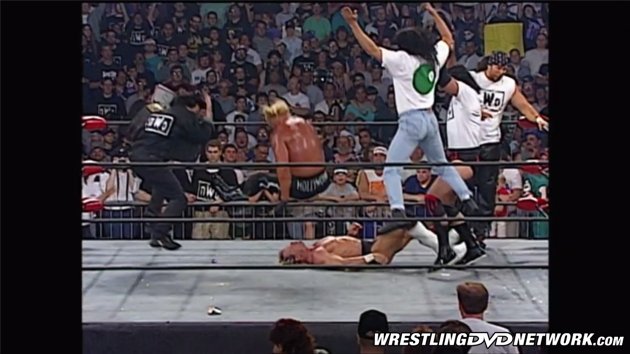 After a break, Okerlund is in the ring with J.J. Dillon. Dillon announces a $50,000 fine for Savage attacking him last and that the DDP/Savage match at GAB will now be a non-sanctioned “Falls Count Anywhere Match”. Savage appears in the crowd with Liz and threatens Dillon until DDP comes to the ring with Kimberly. DDP challenges Savage to a fight and the two go to war as security tries to pull them apart in a solid little segment.

This is easily the match of the night. Debra, who came out early in the match, distracts the referee as Eddie Guerrero comes out of the crowd, arm in a sling, to frog splash Malenko. Jarrett slaps the figure-four on Malenko for the submission win, and the U.S. title, at 11:14. Afterwards Malenko is left speechless in the ring, Guerrero’s sling in hand. With the win, Jarrett’s first U.S. title win, “Double J” ends Malenko’s one and only U.S. title reign at 85 days.

After the match “Mean” Gene interviews Jimmy Hart about the ongoing Kevin Sullivan/Chris Benoit feud. Sullivan comes out with Jacqueline, calls out Benoit, and the two immediately go at it. Meng, Barbarian, and Jacqueline beat Benoit down as they go to commercial. 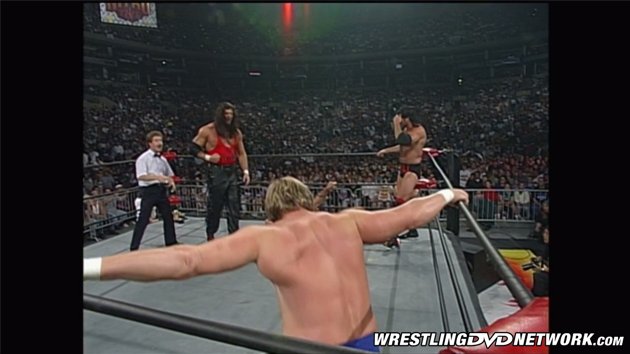 This is one of the most infamous matches in NITRO history. Supposedly the four had agreed not to start the match as a brawl and Piper and Flair wouldn’t listen. The match starts in exactly that fashion and quickly turns into a hot mess, with Nash obviously irate. After the commercial break the match calms down but it’s still a complete mess. All four men are talking to the referee but nothing’s sorted. Eventually Syxx gets involved and the match is thrown out at 3:39. The fans are not happy.

After the match The Outsiders and Syxx continue to beat down Flair and Piper before Jarrett, “Mongo”, and Benoit come to the ring only to be joined by the rest of the nWo. Kevin Greene runs in and goes to war with “Mongo” when suddenly The Steiner Brothers and Harlem Heart start brawling. There’s fights in the ring, in the aisle, on the stage, and at the commentary table where Wrath and Mortis are fighting Glacier. Soon even the luchadors run down and they start fighting.

Sullivan, Meng, and Barbarian come out and start beating the bejabbers out of Benoit until DDP and Savage hit the ring and they start to fight until Hogan wipes out DDP and Flair with the Big Gold Belt. Sting suddenly drops from the rafters, holds off the nWo with the baseball bat, and hooks DDP to his harness before lifting Page to the rafters as the show goes off the air.

This was a classic NITRO from a classic period in WCW history. It’s not hard to see why WCW was eating the WWF’s lunch at this point with the solid matches, the coherent stories, and the chaotic end to the show. This night is best remembered, however, for what happened after the show when Kevin Nash slapped Roddy Piper in the dressing room. Either way, this edition of NITRO was a perfect setup for a great WCW PPV to come in the 1997 Great American Bash. 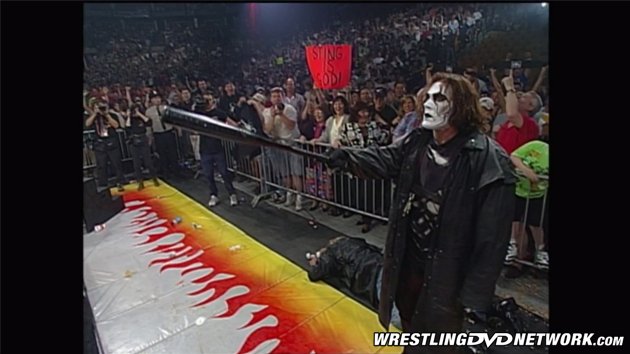 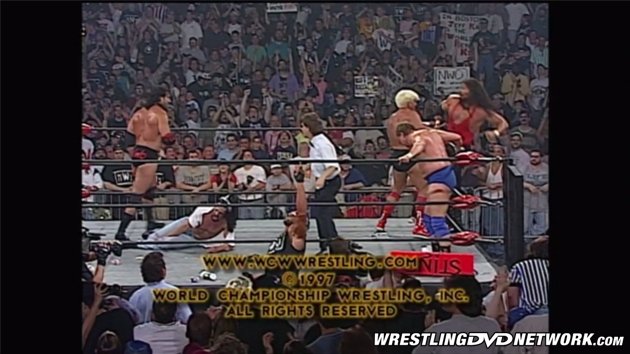 That’s all for this week’s entry into TBT – thanks for reading! If you’re a WWE Network subscriber, go check out this classic edition of NITRO yourself and let us know what you think below.