This week, Throwback Thursday takes another trip through the WWE Network‘s PPV vault to revisit WCW Uncensored ’97, which (if you can believe it) took place 20 years ago today!

From its inception in 1995 to the final event in 2000, WCW’s Uncensored event was home to some of the most bizarre and awful matches in company history (or worst in the history of mankind in the case of the “Doomsday Cage Match”). Be it “King of the Road”, “Martial Arts” matches, the 30-minute “Chicago Street Fight”, or Hogan/Flair in a “barbed wire” steel cage match, Uncensored produced more duds than hits. This edition, however, bucked the trend and became, even with its trainwrecks, one of the best Uncensored events in company history. 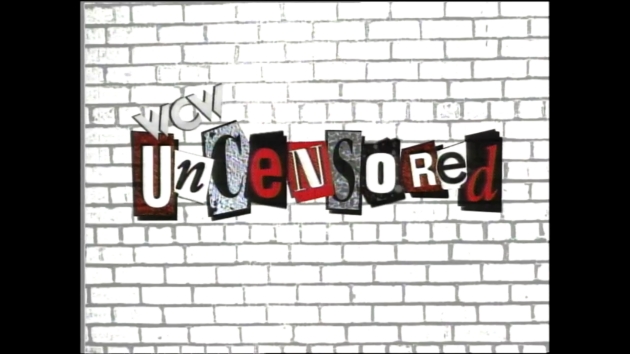 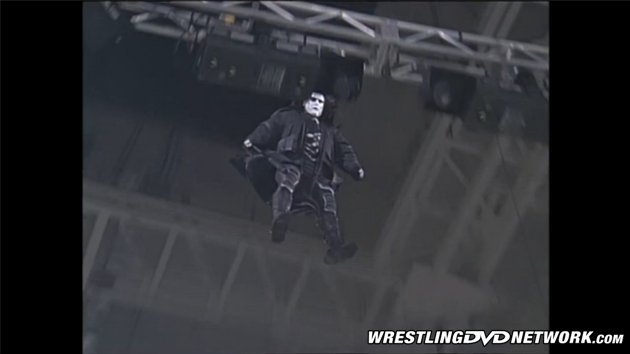 At this point in 1997 WCW was the hottest wrestling promotion on the planet. The slow push was on towards Sting/Hogan and, with Sting finally choosing sides in the WCW/nWo war, this event was a giant first step in that direction. Not even WrestleMania 13, on paper one of the WWF’s strongest WrestleMania cards in years, could cool WCW’s momentum coming out of this event!

With all previous editions of Monday NITRO, as well as all prior PPVs and COTCs, ready available to watch on the Network, context is not an issue here.

Tony Schiavone, with Bobby Heenan and Dusty Rhodes, welcomes us to the show and talk about the unique main event and its even more unique stipulations, including the presence of Dennis Rodman. 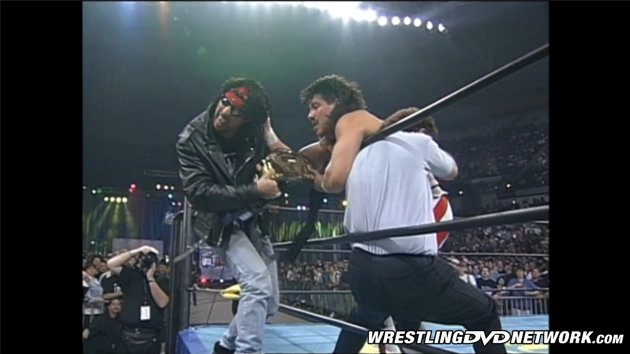 This was the very beginning of Eddie Guerrero’s “lie, cheat, and steal” persona in WCW. The beef between these two (in WCW, that is) goes back to SuperBrawl VII when Eddie inadvertently cost Dean Malenko the Cruiserweight title against Syxx. Early in this one we see footage of Rick Steiner laid out in the back, surrounded by Hall, Nash, and Syxx. Later we see Steiner loaded into an ambulance and driven off, taking him out of the main event.

As for the match, it’s full of first-rate psychology and well-paced action, making this match is as good as anything these two had ever done together, which is saying something. Near the end, with Malenko trapped in his own Texas Cloverleaf, Syxx comes out and tries to steal the U.S. title. Guerrero grabs Syxx, who drops his camcorder in the ring. Malenko picks up the camcorder and decks Eddie with it to score the win at 19:13. This, Dean Malenko’s sole U.S. title win, marked the end of Eddie’s one and only reign as U.S. Champion at 77 days.

After replays Okerlund plugs the WCW Hotline before interviewing Roddy Piper. After a classic Piper promo Jeff Jarrett, “Mongo” McMichael, Chris Benoit and Debra walk in. Jarrett tells Piper they’re riding with him as a unit tonight while Mongo says he’s can’t wait to get his hands on the nWo, and Benoit tells Piper he’s made the right decision joining forces with them.

This is a very good match. Though the two don’t play to the cameras so much there is a marked attempt at American psychology and storytelling which was, by and large, missing from many cruiserweight matches in WCW. In the end Dragon nails a modified/botched tornado DDT from the top before hitting a tiger suplex from the pin at 13:17.

After replays “Mean” Gene plugs the WCW Hotline once again before bringing out Diamond Dallas Page. DDP talks about Randy Savage refusing to accept DDP’s challenge to a match or even acknowledge DDP. “Macho, if you’re that much of a ‘savage’, snap into this!” DDP says, doing his trademark Diamond Cutter sign. 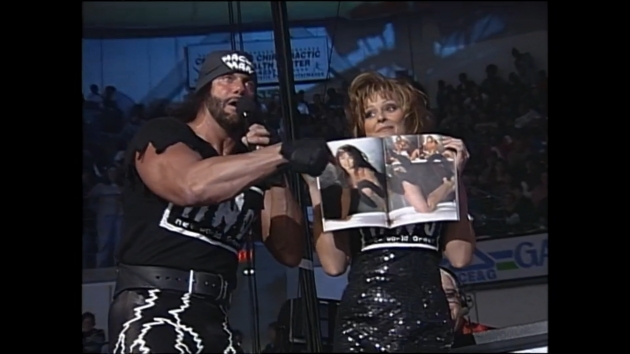 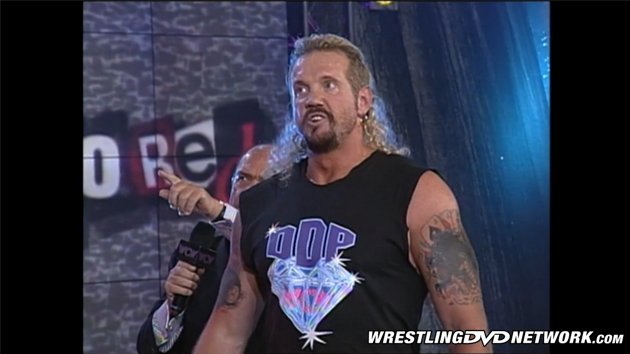 Savage then appears at the announcers table with Elizabeth and tells DDP that Page is “the man”. Elizabeth holds up a copy of Playboy’s Nude Celebrities as Savage tells Page he knows who DDP is now, he’s Kimberly’s wife. Suddenly a disheveled Kimberly walks out from the back covered in nWo graffiti. As DDP turns to help his wife, Savage attacks DDP from behind. Kimberly lays across Page while Elizabeth and Savage tag Kimberly’s back “nWo”.

This marked the in-ring debut of Mortis (Chris Kanyon) who, we’re told, knew Glacier from some shared martial arts background in Taipei or Melmac which was supposed to explain the “martial arts” gimmick. Despite all the fluff surrounding it this match is one of the very few good “martial arts” matches that tells a great story. For those who think Glacier was all hype and no substance, this match will dispel that notion (for a moment). Even with the goofy Shredder-inspired head gear, Glacier looks like a true star in this match. Eventually Vandenberg holds Glacier for Mortis, who nearly kicks Vandenberg in the face when Glacier ducks. Glacier waits for Mortis to turn around and hits the Cryonic Kick for the win at 9:03 to remain unbeaten.

After the match Mortis attacks Glacier while Vandenberg calls the debuting Wrath to the ring. In the ring Wrath and Mortis beat down Glacier until Wrath lays out Glacier with a devastating uranage. 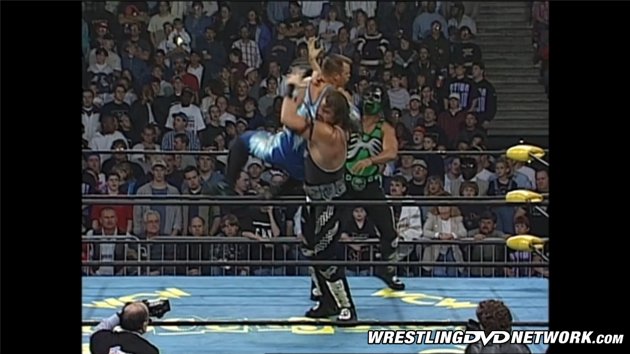 Next we see a replay of the classic scene of the nWo wrecking the Steiner Brothers car from a few weeks back with the announcers saying that the Steiners could have filed charges but wanted to settle it in the ring instead.

About the only thing that can be said about this battle between the former American Males is that it happened. The most entertaining thing about this match is Dusty Rhodes talking about dragging a bag of cement around the ring. Bagwell chokes Riggs out over the top rope and easily walks to all four corners for the win at 12:27.

Backstage we see an awkward nWo promo about Dennis Rodman and Kimberly being nude and making everybody lay down in the ring at the end of night. 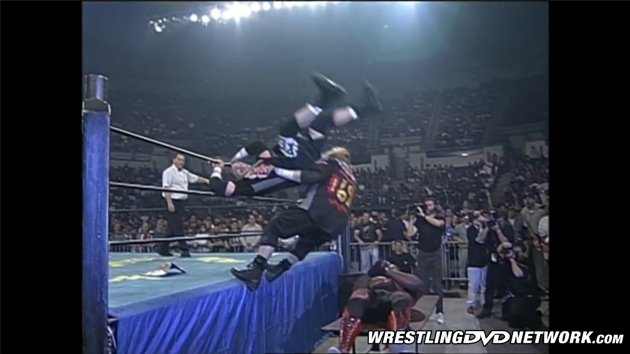 This match is just a fun, wild brawl. Originally this was supposed to be Jarrett and “Mongo” against Public Enemy until the Horsemen joined “Team Piper” for the “triangle elimination” match. The highlight of this match, hands down, is the commentary. At one point Dusty Rhodes loses his mind when Rocco Rock waffles Booker T with a trash can and then again a bit later when Rocco Rock takes Booker out with a pizza pan. Near the end “Mongo” and Jeff Jarrett come out and, as Jarrett distracts the referee, “Mongo” cracks Rocco Rock in the back with his Halliburton. Booker T takes advantage, hits the Harlem Hangover, and scores the pin at 12:27.

In the locker room “Mean” Gene goes over the rules of the “triangle elimination” match before interviewing Scott Steiner, The Giant, and Lex Luger about “Team WCW” being down a man. Scott Steiner tells “Team Piper” to stay out of his face and warns the nWo that they can’t hide behind “the politics of Eric Bischoff” tonight and Giant says it’s time to do some housecleaning. Luger tells Okerlund that this match is about society, the “anti-authority trash”. Luger says there’s a lot of honor in the history of wrestling, but there’s no honor in the nWo. Luger says the time for talking is over, it’s time for action.

Prince Iaukea was on a roll in early 1997 while Rey was seemingly being tested, as were Malenko and Guerrero, for success outside the cruiserweight division. Either way, this match is just a clusterflub. It has its moments where everything clicks, but those are few and far between. Though we’re told the match has a PPV time limit of 15-minutes, the time limit ends at 11:56. Mysterio gets on the mic and asks for more time, which Iaukea agrees to. After a bit more action Iaukea reverses a Mysterio springborad hurricanrana into a rollup for the pin at 13:40.

Up next is a promo for Spring Stampede ’97. 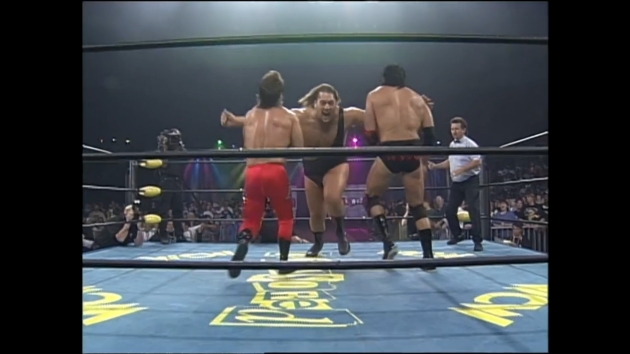 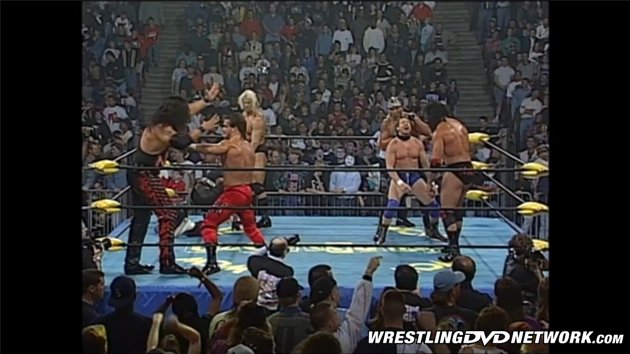 If “Team nWo” wins they get a title shot anytime, anyplace; if “Team WCW” wins the nWo loses their titles and are suspended for 3 years; if “Team Piper” wins Hollywood Hogan must face Roddy Piper in steel cage. But for eliminations, via pinfall, submission, knockout, or over the top rope, the match operates under “WarGames” rules, with a 5-minute opening round and two 2-minute rounds with one man from each team entering the fight every round.

Chris Benoit and Scott Hall start fighting before Giant gets to the ring, but the round doesn’t begin until Giant gets in the ring. As the first round winds down Giant misses a Stinger Splash on Scott Hall and eliminates himself over the top rope at 5:16. Jeff Jarrett, Randy Savage, and Lex Luger are next out and the match becomes a brawl with “Mongo”, Kevin Nash, and Scott Steiner joining the fray soon after. As the third round winds down Nash dumps Jeff Jarrett from the ring at 9:35. Moments later Scott Hall back body drops “Mongo” over the top at 10:03. Soon after, Kevin Nash boots a crotched Scott Steiner over the top at 10:32, leaving Lex Luger as the final “Team WCW” man left. 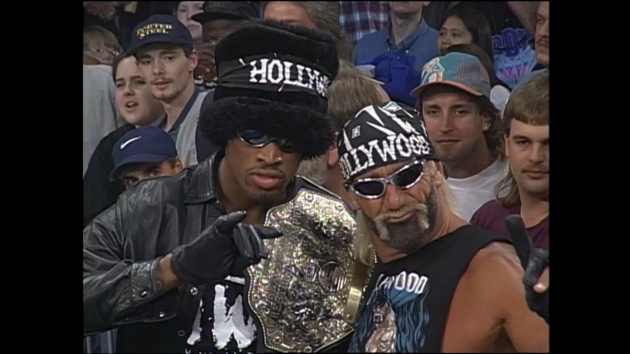 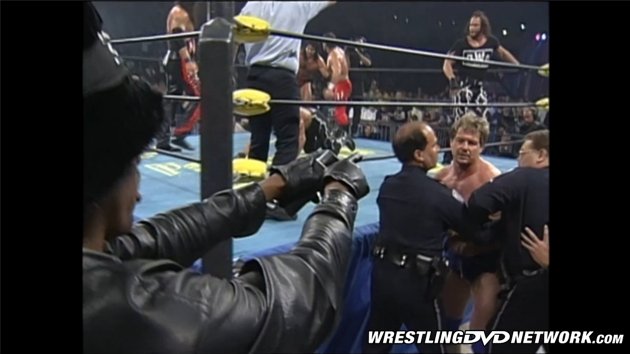 Roddy Piper hits the ring before Hogan (with Dennis Rodman) and starts brawling with Savage until the nWo gang up on Piper. Out of nowhere Rodman pulls the top rope down and Piper goes over the top rope at 15:10 where the rest of “Team nWo” continues the mugging. In the ring, Hall hits the Outsider’s Edge on Benoit before Nash hurls Benoit over the top at 16:46, finishing off “Team Piper”. With Luger the only one left, “Team nWo” begins to celebrate. Suddenly Lex Luger makes an epic comeback eliminating Savage (18:41), Nash (18:49), and Hall (19:03) in a flash, leaving just Luger and Hogan. With the referee busy with Nash, Luger lifts Hogan in the torture rack. But Savage grabs a can of spray paint from Rodman and brains Luger, allowing Hogan to easily score the 10th and final elimination at 19:40.

After the match Dennis Rodman tags Luger “nWo” and whiffs on several slaps. The New World Order pose in the ring and begin to walk away when Sting repels from the rafters with a bat. Sting takes out Hall, Nash, and Savage with Scorpion Death Drops before daring Hollywood to get in the ring. Sting drops the bat and Hogan climbs in the ring where Sting drops Hogan with a Scorpion Death Drop as the credits begin to roll.

This was WCW at its best! With only two so-so matches (Bagwell/Rigs and Mysterio/Iaukea) the WCW Uncensored ’97 PPV stands as a true high-water mark for the company.

The good news was that this marked only the beginning of a string of great events in 1997. 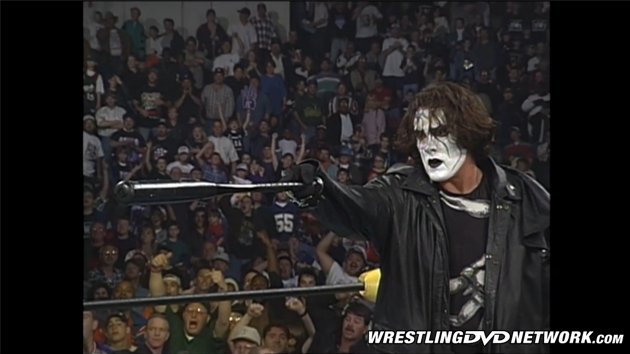 If you haven’t seen Uncensored ’97, what are you waiting for? You can relive this classic WCW event now – that is, if you’re currently subscribed to the WWE Network. Go take a peek and don’t forget to tell us what you think in the comments section below.

Watch every WCW PPV in history, WrestleMania 33, and over 7,500 more hours of content on the WWE Network. Your first month is FREE! Click here to subscribe to the WWE Network.