This edition of World Class Championship Wrestling is the second of two that were dedicated to the big Thanksgiving Star Wars card from November 28, 1985. While WCCW was in the midst of an upswing (highlighted by the Dynamic Duo/Von Erich feud), Thanksgiving Star Wars was, in hindsight, the beginning of the end for the Dallas territory. 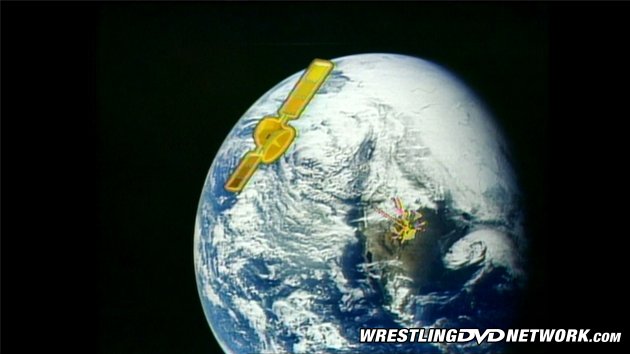 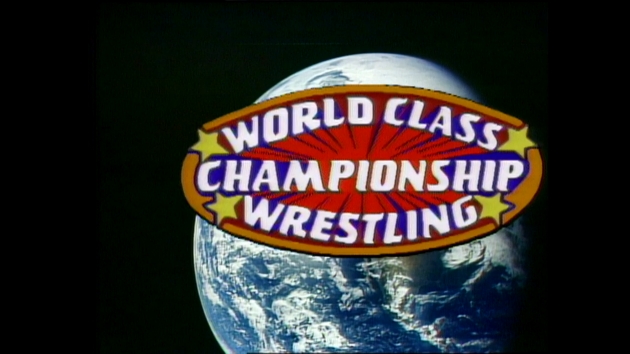 On the heels of arguably the biggest tour in company history, a highly successful tour of Israel in early August ’85, Mike Von Erich developed a near fatal case of toxic shock syndrome after surgery to repair a shoulder injury sustained in Tel Aviv. This would lead to the infamous “Lance Von Erich” gimmick (the supposed son of Waldo Von Erich), portrayed by William “Ricky” Vaughn, debuting on the October 6, 1985 Cotton Bowl Extravaganza in front 26,000, a gimmick that would backfire terribly on WCCW.

A month prior to this event, on October 28, 1985, the National Wrestling Alliance booked its final World title match in the Dallas territory when Ric Flair wrestled Lance Von Erich to a no contest. With Jim Crockett, Jr. gaining more control over the NWA and Bob Geigel effectively partnering with Crockett, Jr., Fritz Von Erich was the odd man out. With little chance of the NWA World Champion being booked in the Dallas territory again and no hope to see son Kerry voted NWA Champion the cartel all but forced Fritz to pull out of the NWA in February of ’86 and form the World Class Wrestling Association.

Context on the Network, meanwhile, is a hit and miss affair. While most of the previous years are nearly complete, 1985 in particular is missing 18 editions of WCCW.

The show opens with the usual WCCW opening and Bill Mercer in the Reunion Arena, not the Dallas Sportatorium, for the last of the Thanksgiving Star Wars matches held on November 28, 1985. 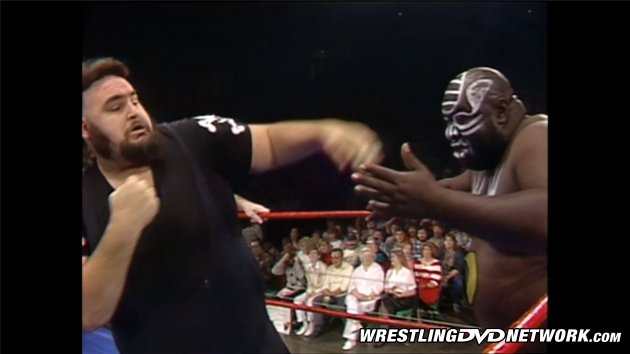 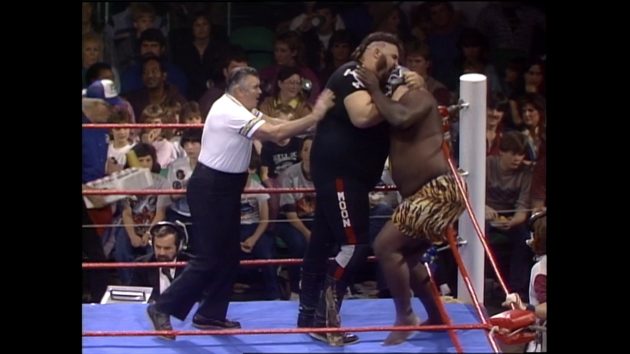 This one is just terrible. Nothing but punches and bumping and thumping for three minutes until both guys end up attacking the referee and the match being ruled a double disqualification at 3:23. After the match Gang grabs his chain and chases Kimala to the back. 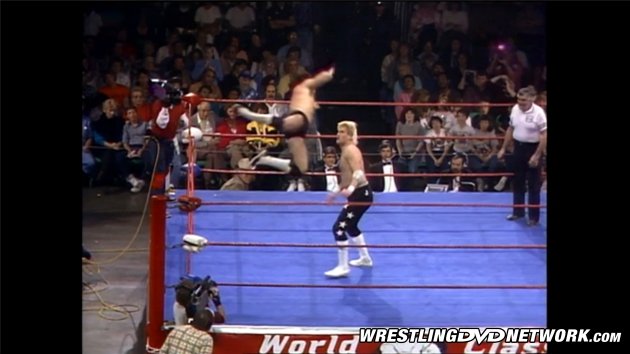 This rivalry goes back to the 2nd Cotton Bowl Extravaganza on October 6, 1985 when Adias defeated Victory with a spinning toe hold, a maneuver that left Victory injured. The story here is Victory being too preoccupied with injuring Adias to win the match. It’s not a terrible match but it’s no classic either. I’ve seen both guys do a lot better than this. Adias retains the title with a flying bodypress at 7:07. 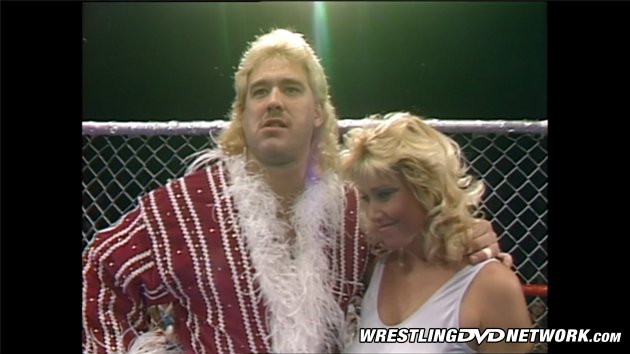 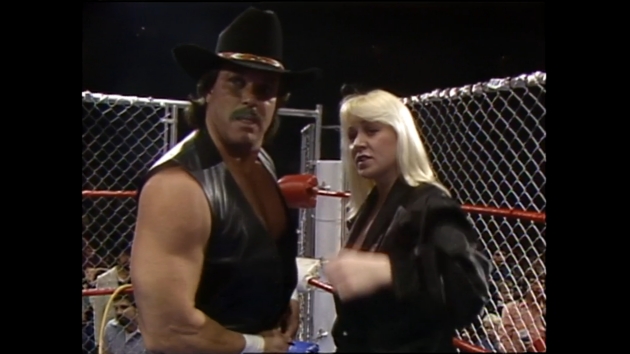 This battle was as much about the ladies involved as it was the wrestlers. To win this match one of the wrestlers just needed to escape the cage, so this isn’t the typical “Texas Death Match”. This is your basic “steel cage” match with very few memorable spots or moments. The crowd is super hot for it, though. Late in the match Casey is on the verge of climbing out of the cage when Missy shakes the ring ropes and Casey squishes his plums on the top rope. Tatum takes advantage and walks out of the cage door for the win at 9:20 in a bloodless “Texas Death Match”.

After the match Sunshine and Missy go at it while the referee “attempts” to break it up. As Tatum comes back in The Great Kabuki enters and attacks both men before removing Sunshine from the ring. Kabuki shuts the cage door behind him and takes the fight to Casey, who is eventually busted open. The babyfaces rush the ring to help Casey but the fight rages on until the babyfaces get hold of Kabuki and escort him from the cage. 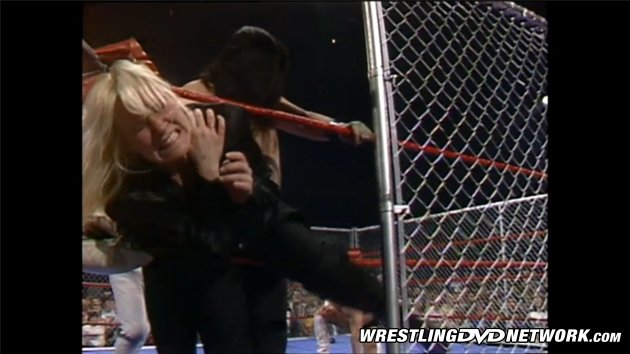 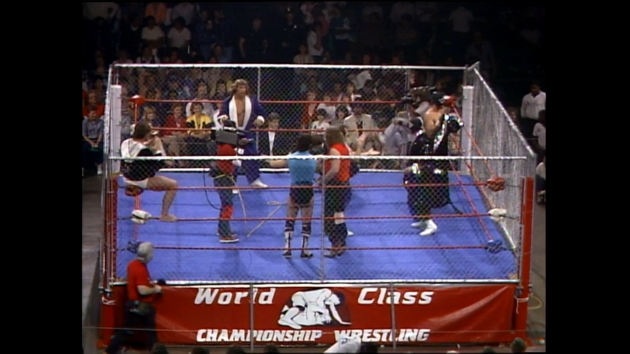 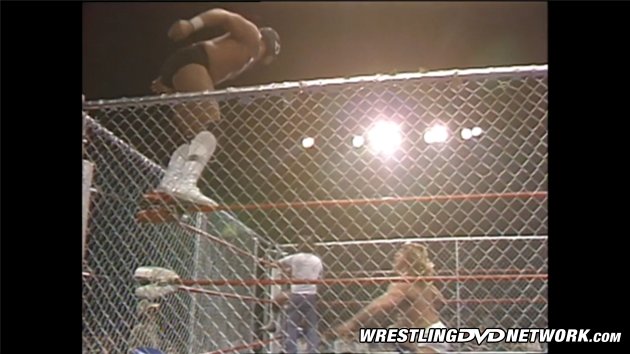 The Duo are wrestling under masks after having their heads shaved in a great angle to close out the October 6, 1985 Cotton Bowl Extravaganza. This match is a “tornado”-type of match with all four wrestlers in the ring at the same time and it’s a war from the opening bell. Gordy keeps getting the Von Erich’s faces any time one of the brothers is close to removing one of The Duo’s masks while Adias seems okay with it. This leads to Gordy attacking Adias, and Kerry and Gordy nearly going at it before Gordy kicks the cage door open and storms out while Adias powders a short time later. Gino misses his patented flying back elbow which allows Kevin and Kerry to unmask Chris Adams who turns around and clocks Kevin with a super kick. Gino loads his mask and headbutts Kerry while Adams picks up the pin at 8:16 to win the vacant American Tag titles for a second time as a team and Gino’s sixth (and final) American Tag title win overall.

After the match Kerry and Kevin trap Gino in the ring, as Lance Von Erich holds Adams off outside, and end up removing Gino’s mask to a massive pop! 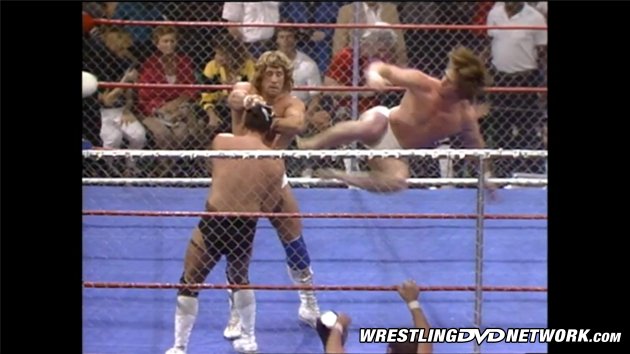 After a break Bill Mercer is in the ring and tells us that the next time Casey and Tatum meet it will be at the Christmas Star Wars event on December 25, 1985 where Missy and Sunshine will compete in the match. We get one last plug for the Kerry/Rude American Heavyweight title match next week before the credits roll.

Though the main event is frankly the only great match on this card (well worth watching, by the way) World Class Championship Wrestling #207 is important nonetheless for marking the final time WCCW would draw over 12,000 fans to Reunion Arena for a Star Wars card.

After 20 years the Von Erich reign as “king of the ring” in Dallas was beginning to come to an end. 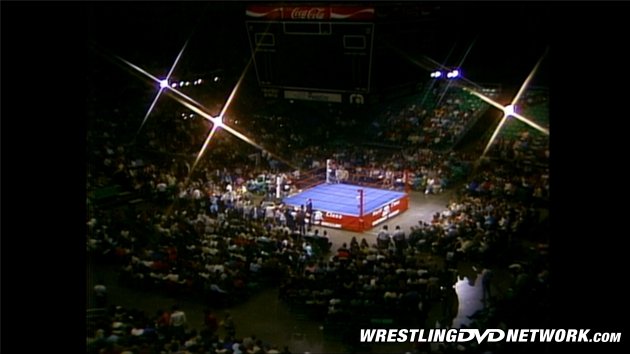 If you’re already a subscriber to the WWE Network you can re-live this classic edition of WCCW today or see it for the very first time! As always, let us know what you think below!

Watch legends, present day Superstars, and every WWE PPV across 9,000 hours of content on the WWE Network. Your first month is FREE! Click here to subscribe to the WWE Network.